I have my favourite French food writers, but among my best-loved cookbooks are those by Canadian food writer Lucy Waverman and the English Nigel Slater. Recently, I came across the following words by Slater that got me thinking:

Sourness in the kitchen is underrated. It took me years to realize this. A bite of sharpness in a sauce or a salad dressing can bring food to life, making it sing in the mouth. … what is especially useful is vinegar’s ability to help adjust the seasoning of something that is too rich, too sweet, or too cloying. This alone makes it an essential kitchen ingredient (Appetite, p. 86).

It’s interesting that he took a long time to figure it out. I sense that French cooks know this secret from early on. Vinegar is an important staple in French kitchens.

After all, the guild of vinegar-makers (vinaigriers) received royal recognition in French in the 14th century. The trade was centred on the town of Orléans, but the rue des Vinaigriers in Paris (near the Canal St-Martin) suggests that there were vinegar makers in Paris too. Today, the one remaining traditional vinegar maker based in Orléans is Martin Pouret (founded in 1797).

Slater recommends maintaining a small selection of vinegars in the pantry, and singles out red wine vinegar as the best all-round choice, but he also makes room for white wine vinegar, tarragon vinegar, sherry vinegar and balsamic vinegar (the French take on balsamic, Banyuls, is hard to find outside France). 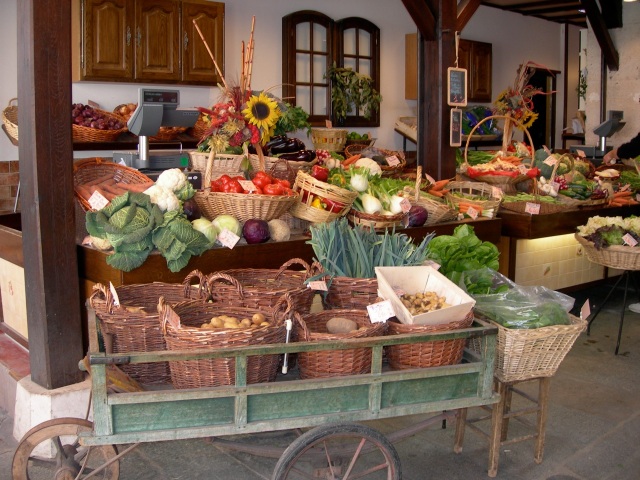 We go through vinegar pretty quickly in this household. There’s our favourite Pork Chops Piquant and a good chicken in vinegar recipe from Laura Calder’s French Food at Home (she says she got it from cooking teacher Anne Willan of La Varenne). 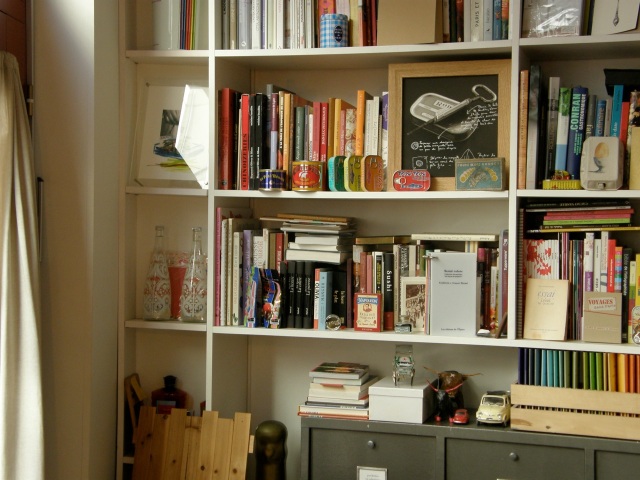 We have the little cookbook on sherry vinegar, by Alberto Herráiz, the Spanish chef at the Restaurant Fogon in the 6th arrondissement. His chosen ten recipes include one for small chocolate cakes (cupcakes, really) made with sherry vinegar. I’ve never made it, but stay tuned.

And then, of course, are all the things you can do with vinaigrette. Salad dressing is only the beginning. It can be even better on warm veggies, such as leeks. Leeks vinaigrette (poireaux vinaigrette) can be served as an appetizer or a side dish. The simplest versions call for leeks, white wine vinegar, olive oil, shallots, and Dijon mustard, but you can add other things. Laura Calder’s version calls for lemon and grated Parmesan cheese, for example, and Molly Wizenberg suggests adding finely chopped bacon or crumbled hard-boiled egg.

That’s all very well, but the crucial thing is just to get the vinaigrette right, and that means experimenting. Some people swear by a three-to-one ratio of oil to vinegar, others favour two-to-one or even one-to-one, but it all depends on the ingredients. And choose your mustard carefully. Last time we used a bright green Maille mustard (it contains chives, parsley, and basil), and the taste and colour went wonderfully well with the leeks. Finally, choose slender leeks. Supermarket leeks can be as thick as a tennis racket handle and have as much flavour.

Here’s the recipe for two people:

Make the vinaigrette by mixing the first three ingredients. The easiest approach is to put them in a jar with a tight-fitting lid and shake it vigorously. Test, and make adjustments to the ingredients according to taste. Then add the shallots.

Bring a pot of salted water to a boil. Trim off the hairy ends of the leeks (but not so far up that the leeks fall apart) and remove the hard dark green leaves. Make one or two lengthwise cuts so that the leeks fan out at the top, but not all the way through, so they remain held together at the bottom. Wash away any soil or sand and boil in the salted water for about 10 minutes. Strain, then put the leeks in a bowl and toss with the vinaigrette. Serve warm.

With the green mustard, it tastes of spring. Here in Canada, we could use a little more of that.

Text by Philippa Campsie; photographs by Norman Ball. (The markets shown are Montorgueil and Beauvau.)

Parisian Fields is the blog of two Toronto writers who love Paris. When we can't be there, we can write about it. We're interested in everything from its history and architecture to its graffiti and street furniture. We welcome comments, suggestions, corrections, and musings from all readers.
View all posts by Parisian Fields →
This entry was posted in Paris food, Paris markets and tagged Alberto Herráiz, Anne Willan, Banyuls vinegar, Beauvau market, Editions de l'Epure, La Varenne, Laura Calder, leeks vinaigrette, Maille, Martin Pouret, Molly Wizenberg, Montorgueil market, mustard, Nigel Slater, Orleans, Restaurant Fogon, sherry vinegar, vinegar. Bookmark the permalink.