One day, at a flea market, I bought an old board game called Le Jeu de l’Oie (the Game of the Goose). I was attracted to it because I had seen a reproduction of a similar board in a newspaper around that time and wanted to know what it was and how it was played. Here’s what my flea-market version looks like.

This version of Le Jeu de l’Oie is distinctively French-looking, with images of rural characters in traditional garb and lots of pictures of food. As in Snakes and Ladders, the players are trying to reach the final place on the board (No. 63) and are subject to snake-like setbacks (called “accidents”) or ladder-like advancement (you get two turns whenever you land on a picture of a goose). But there’s a difference, because you have to pay fines and put up some sort of “stake” – money or matchsticks or counters – that the winner collects at the end of the game.

Here is a fairly free translation of the instructions printed in the middle of the board.

For this game, you need two dice. Each player needs a distinct piece to mark progress around the board. The players fix the fines to be paid for different accidents and each puts up a stake. Each player throws the dice in turn and moves his or her piece forward the number of places shown by the dice.

Whoever arrives exactly at the 63rd box wins and takes the stakes, plus any fines. If the number shown on the dice takes the player past No. 63, he or she retreats the number of excess spaces.

Any player who lands on one of the geese placed at every ninth spot on the board gets an extra throw. 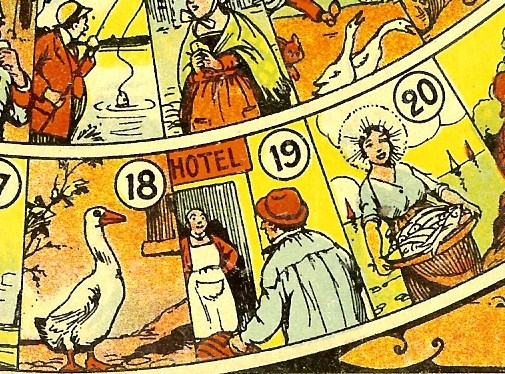 If you land on No. 31, the well, you have to pay a fine and wait until another player comes to the same place; at which point, he or she takes your place.

If you land on No. 52, the prison, you pay a fine and wait until someone else lands on the spot; that person will replace you in prison. 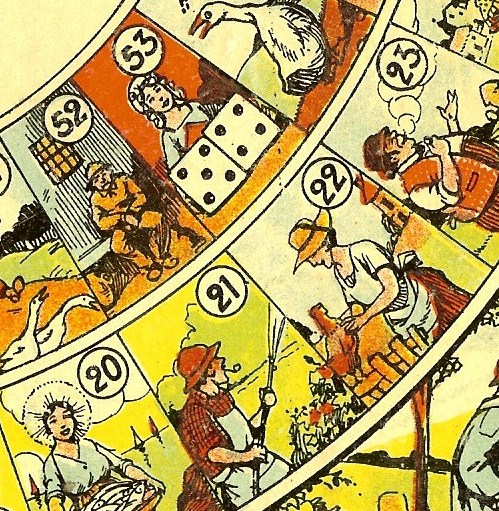 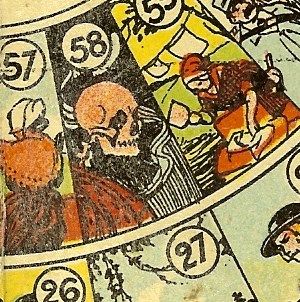 If you land on a number occupied by another player, he or she pays a fine and takes the place that you had started from on that turn.

The flea market board is more detailed than some other versions, which have illustrations only in the places that matter – the bridge, the inn, the well, the prison, the labyrinth, death, the geese. I love the wealth of detail on this version, including the illustrations in the corners.

According to a website devoted to the game, it originated in the 16th century in Italy (although the Italians apparently got the idea from the ancient Greeks), and versions have been created in all kinds of countries, including China and Japan. It seems to have been well known in North America in the 19th century. There is even an example in Canada’s virtual museum.

So I wonder why I had never seen it before. Clearly, though, it persists in France, and modern versions are available in toy stores.

Le Jeu de l’oie is to French people what Monopoly is to North Americans. Most North Americans immediately understand what it means to “land on Park Place” or the implications of that immortal phrase “Go to Jail. Go directly to Jail. Do not pass Go. Do not collect $200.” Similarly, the French seem completely attuned to the perils of the goose game and the term appears in newspapers and magazine articles as a synonym for a game of chance.

If you search online for images of the French game, you will find versions pressed into service to make political points or raise AIDS awareness or teach children about everything from arithmetic to geography. 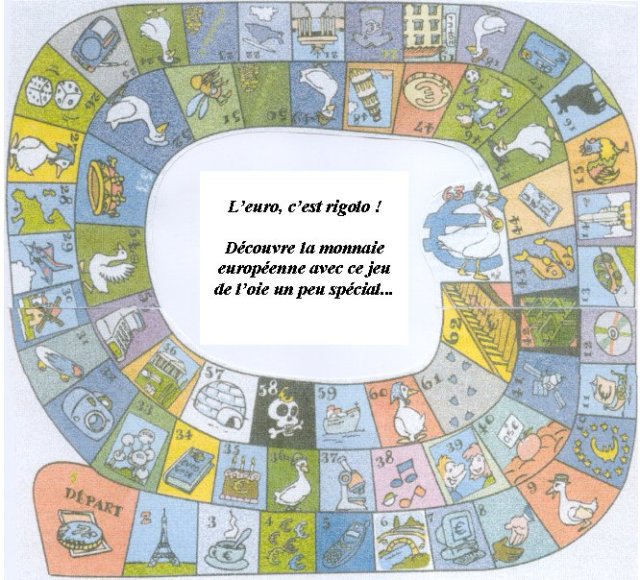 One can imagine collecting multiple versions of the game, and I’ve no doubt that somewhere out there, somebody does just that. There are so many iterations that one could spend a lifetime tracking them all down. I think I will just stick with my flea market version. We have, after all, only so much house room.

All I need now is some dice, some counters, some markers, and a partner. Norman, what are you doing this evening?

Parisian Fields is the blog of two Toronto writers who love Paris. When we can't be there, we can write about it. We're interested in everything from its history and architecture to its graffiti and street furniture. We welcome comments, suggestions, corrections, and musings from all readers.
View all posts by Parisian Fields →
This entry was posted in Paris flea markets, Paris nostalgia, Paris popular culture and tagged Le Jeu de l'Oie, Monopoly, Snakes and Ladders. Bookmark the permalink.