Designer of the invisible

When you arrive at Charles de Gaulle Airport in Paris, one of the first things you will see is the work of a man who died on September 10 of this year: Adrian Frutiger, type designer.

You won’t give it a minute’s thought. You will look for your gate and the shops and move on. But the ease of finding your plane and your duty-free Veuve Clicquot depends on clear signs. Now, of course, more and more airports are signed in pictograms. But not everything can turned into a picture (such as, apparently, an airport lounge, judging by the image above). And for those signs, there’s Frutiger. The designer’s name is now forever attached to the typeface used at Charles de Gaulle.

The best typefaces are invisible. One is so busy absorbing the content of the message that the actual form of the message disappears. As Frutiger himself put it, “If you remember the shape of your spoon at lunch, it has to be the wrong shape. The spoon and the letter are tools; one to take food from the bowl, the other to take information off the page… When it is a good design, the reader has to feel comfortable because the letter is both banal and beautiful.”

Frutiger seems to have developed this approach over time. After training in Switzerland, where he was born, he settled in Paris and went to work for the type foundry Deberny and Peignot. 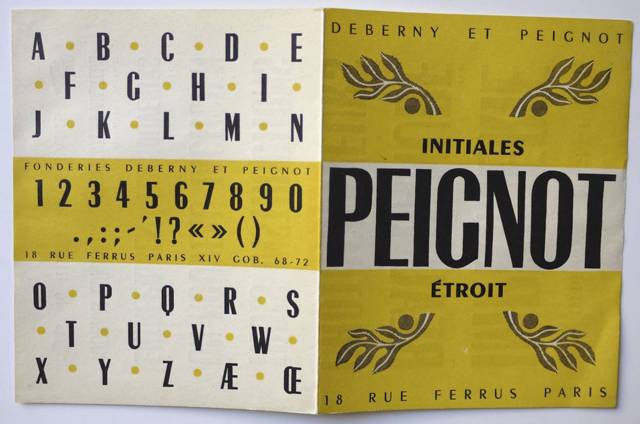 (Now here is where I get to admit that I am a type snob, and the minute I saw the name “Peignot,” I thought, what, the creators of that font? The font named Peignot, which is not the one shown above, was designed in 1937 and enjoyed a resurgence in the 1970s. It may look familiar to people of a certain age as the font used for the “Mary Tyler Moore Show.” I don’t think it has aged well. But I digress.)

Frutiger’s first efforts with Deberny and Peignot were varied: President, Ondine, Meridian. These are not invisible or banal typefaces, but he was a young man making a name for himself at this point. Here is a sample of each, in order:

Things changed in 1954 when he developed the simple, clean, sans serif font Univers. This was three years before the creation of the now-ubiquitous Helvetica. Frutiger indicated the difference between the two quite simply: “Helvetica is the jeans, and Univers the dinner jacket.” If you compare the two, you will see the subtle elegance of Univers in comparison to the workaday appearance of Helvetica:

(The top one is Univers.)

But there was more to it than that. Univers was a system, a whole family of fonts that could be specified by number, rather than the vaguer, more subjective terms “bold” or “extra bold” or “italic” or “condensed.” It was neat, precise, and well-organized and allowed for greater choice.

Here’s one of many examples of Univers in use: London street signs.

Adrian Frutiger was in his twenties when he created Univers. In 1962, at the age of 34, he opened a type design studio at the Villa Moderne in Arcueil, just outside Paris, with two colleagues, André Gürtler and Bruno Pfäffli. I am not sure if the building survives, but an image of it appears on the cover of a book.

A few years later, Frutiger became involved in the planning for a new Paris airport at Roissy, to the north of the city. I love his description of the early discussions:

Paul Andreu, a dynamic young architect and engineer, was entrusted with this project. He formed an architectural study group comprising interior architects, color specialists, philosophers, a musician and a typographer. Long evening sessions for brainstorming were accompanied by food and drink.

The discussions were something quite new for me. Each member of the group just said the first thing that came into his head on successive subjects. I remember one of them recommending that the experience of take-off be made to last as long as possible, so that passengers could truly and deeply experience their separation from Mother Earth. After half a dozen glasses of wine we heard proposals like the desirability of laying down a pasture for sheep at the airport.

Can’t you just see it? Philosophers and a musician! I am willing to bet that most of them were wearing black turtlenecks and smoking Gauloises as well as knocking back the red wine. Frutiger continues:

I was commissioned to design the entire signage system for the airport. Everyone thought that I would want to use the Univers typeface, but I was aware that this kind of sanserif face had too round and closed an effect for the easy recognition of word-signs. I took out the drawings of Concorde, the sanserif which I had designed…in collaboration with André Gürtler, and made some sketches. The banana-yellow background recommended by the color specialist was obtained by superimposing several transparent Letraset color foils, and we cut the word “Départ” from a rather bolder and more expanded version of Concorde, with the word “Departures” pasted above it in black. Proof of better legibility than Univers was not hard to demonstrate. In addition, Paul Andreu was fascinated by the thought of using a special kind of “Airport Type.”

Thus was born the typeface now known as Frutiger, although it was first called “Roissy” and only later named for its creator. One distinctive touch was the stubby little arrows used to indicate direction. 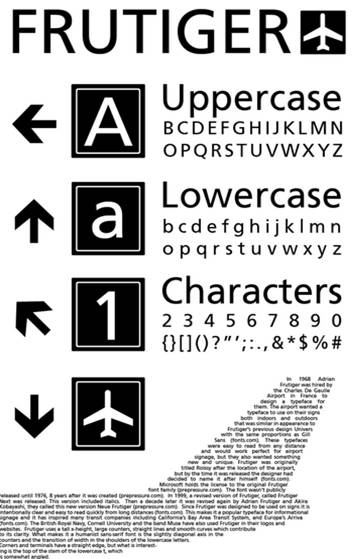 (As for the musician who participated in those late-night debates, he might have been Bernard Parmegiani, who created the sound known as “Indicatif Roissy” that used to play just before an announcement over the PA system. Click here to hear it.)

Frutiger later reconsidered his work at the airport, still referring to the typeface as “Roissy”:

What I may say as a critic, after thirty years of the use of Roissy Airport typography, is this: that the Roissy face is too light and too closely set. Moreover there is too little space, too narrow, around the letters, especially in the signage for the access roads. The first thing the driver sees on arriving is the colored rectangle.

He was always very conscious of the space around type, of the voids and shapes created by the background behind the type. Indeed, he once said, “When I put my pen to a blank sheet, black isn’t added but rather the white sheet is deprived of light… Thus I also grasped that the empty spaces are the most important aspect of a typeface.”

Meanwhile, his typeface had left the airport and entered the Metro. Yes, those wayfinding signs are Frutiger.

(Newer Metro signage uses upper and lower-case letters and is in a typeface known as Parisine, created by Jean-François Porchez. But the older signs in all caps tend to be Frutiger.)

You’ve also seen it on Rand McNally maps published since 2004 (before that, it was Univers).

And here in Canada, our national radio and television broadcaster, the Canadian Broadcasting Corporation, uses a version of Frutiger Bold.

Everywhere, and yet invisible. Frutiger went on to create more fonts that were less self-effacing, such as Herculaneum, Iridium, Serifa, and Versailles, shown in order below.

But he will probably always be best known for the unremarked but nonetheless extraordinary fonts that get us where we want to go.

Text by Philippa Campsie; font samples created at linotype.com, which is also the source of the quotations from Adrian Frutiger; photograph of Adrian Frutiger by Henk Gianotten, other images from Wikipedia.

If you are interested and would like to learn more, I recommend the slides and commentary by Mark Simonson, available on SlideShare.

19 Responses to Designer of the invisible