Before our last trip to Paris, a friend and fellow Francophile lent me a book to read on the plane: The Hare with the Amber Eyes by Edmund de Waal. I highly recommend this absorbing family saga, imaginatively told through the story of the acquisition, travels, loss, and rediscovery of a collection of Japanese netsuke (small carvings) first acquired by Charles Ephrussi, a Parisian art collector, in the 1870s.*

I had never heard of the Ephrussi family, although they were on a par with the Rothschilds in their day. The Ephrussis were wealthy Jewish bankers from Odessa, where they had originally made a fortune in the grain business. Charles Ephrussi, who dominates the first part of de Waal’s book, was an aesthete and patron of the arts who serves as the model for the character of Charles Swann in A la Recherche du Temps Perdu by Proust.

The book included a grainy photo of Charles’s Paris house. The author mentioned that it was not far from the house of the Camondo family (now the Musée Nissim de Camondo) on the rue de Monceau. So of course I had to go and look. I found the house at number 81 and stood in front to take a picture. Edmund de Waal notes that Charles’s rooms were on the second floor (what to North Americans would be the third floor), facing the street.

The house had been finished in 1871, just in time for the end of the end of the Second Empire and the upheavals of the Commune, in an area that de Waal calls “so of-the-minute that [it was an] unfinished, untidy, loud and dusty building [site].” It was the 1870s equivalent of today’s suburban subdivisions filled with oversized houses that have replaced farmers’ fields on the outskirts of many North American cities – enclaves of millionaires, many of them newcomers to Canada or the United States, as the Ephrussis were newcomers to France.

The Plaine Monceau, developed by the Pereire brothers around the Parc Monceau, was something like that, with one important difference – today’s suburban monster houses are surrounded by acres of lawn and highly visible. A good part of this Paris house was out of sight. So I walked into the courtyard (the building is now an insurance office). The house extended along the left hand side. Large windows looked into a courtyard with stable doors opening into it. Edmund de Waal says that the courtyard was once glassed over.

On Google satellite view, I saw that the street side of No. 81 is the narrow end of a large mansion with two short wings; the other end appears to overlook a garden with mature trees. Although tourists walking through expensive residential districts in Paris may wonder how people can stand to live in an environment that seems to be mostly stone, brick and concrete, in fact, nothing could be farther from the truth. Google satellite views show all kinds of gardens and greenery in the interiors of city blocks, overlooked by the windows of large houses, but invisible to mere tourists.

Eventually I wandered back in the direction of the Musée Nissim de Camondo, another huge hidden house. In this case, the façade is directly in front of you as you walk into the courtyard. There were few other visitors and the place was quiet. I paid for admission and received one of those audio guide contraptions.

It’s an odd place, not at all typical of the houses of the period, and nothing like the original version of the Hotel Ephrussi up the hill. The house bought by Moïse de Camondo in the 1870s was rebuilt in 1911 to house his collection of 18th paintings, furniture, and décor. It was intended to resemble Marie Antoinette’s Petite Trianon, so it has little in common with the ornate 19th-century houses around it. The house also has its own garden, as well as a private entrance to the Parc Monceau. 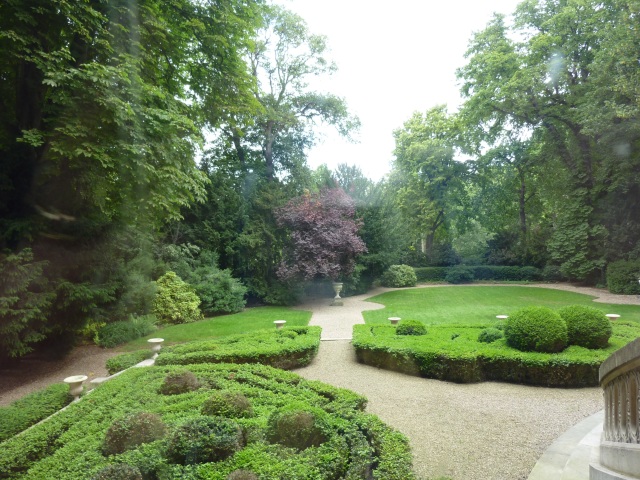 Inside, entire rooms were designed to accommodate expanses of wood panelling or collections of artwork Camondo had acquired. But he was not such an obsessive antiquarian that he insisted the whole house be authentic to the 18th century, so there is a lift, a kitchen with all the modern conveniences of the time, and two glorious tiled bathrooms with what would have been the latest in modern plumbing in 1911.

It is saddening to think that only a few years later, the son on whom Moïse doted was killed in action in the First World War (he is the Nissim de Camondo for whom the museum is named and he was a pilot) and that his daughter Béatrice and her family died in the Holocaust. And it is amazing to realize that because Moïse de Camondo donated the house, with all its furnishings, to the Musée des arts décoratifs in the 1930s, it remained intact, down to the family photographs on the tables, throughout two world wars and the rest of the turbulent 20th century, when so many other collections were dispersed.

From the stairway window, I saw a small cobbled lane to one side, clearly a service entrance allowing for deliveries to the kitchen. Later I found the lane behind the house and walked along it, stopping to watch someone photograph what looked like an aging actor (should I have recognized him?) for what might have been a magazine or commercial shoot. 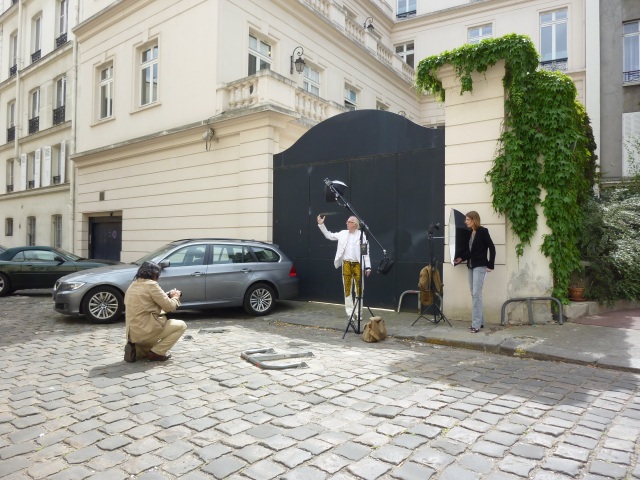 On the other side of the museum, I also noticed a grand house next door at No. 61. When I left the museum, I saw that this was now the Paris office of Morgan Stanley. But it was not until later that I found out that it had originally been the home of another member of the Camondo family – Abraham, and his son, Isaac. When that branch of the family went bankrupt in the 1890s, the house was sold to Gaston Menier of the family of chocolate makers.** (Much later, in the Second World War, No. 61 went through an evil period as the Paris headquarters of the feared Milice – a French militia that fought on the side of the Germans and against the Resistance.) 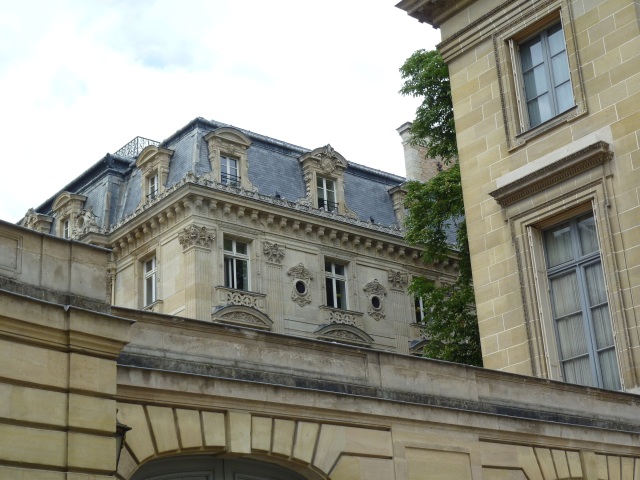 Abraham de Camondo was also an art collector, but unlike Moïse and more like Charles Ephrussi, he patronized artists who were his contemporaries – including many Impressionists. When he died, his son wanted to give his collection of pictures to the Louvre, but the Louvre seems to have fumbled the acquisition. The collection was split up – some pieces stayed in the Louvre, some went to the Musée Guimet, and some ended up in what is now the Musée d’Orsay. Furthermore, the name of the donor was at some point eliminated from the public information about the artworks (I am not sure why), so visitors to these museums do not know the source of many well-known Impressionist pictures. The Camondos’ legacy to the city is much larger than most people realize.

This is one of the paradoxes of Paris. The staggering wealth, both past and present, that is so much in evidence is sometimes hard to accept in comparison with the staggering poverty, both past and present, of many inhabitants. And yet the collections amassed, first by aristocrats, later by bankers and other wealthy business people, are the foundation of the city’s reputation as a capital of the arts and are now part of a public heritage. The Camondos and Ephrussis enriched the city, even as they enriched themselves. Without them, the city would be a poorer place for everyone.

*Click here to read an excerpt from the book.

**Another member of the Menier family, Emile-Justin, had an even more over-the-top house around the corner at 5, avenue Van Dyck.

Parisian Fields is the blog of two Toronto writers who love Paris. When we can't be there, we can write about it. We're interested in everything from its history and architecture to its graffiti and street furniture. We welcome comments, suggestions, corrections, and musings from all readers.
View all posts by Parisian Fields →
This entry was posted in Paris gardens, Paris history, Paris museums and tagged Camondo family, Charles Ephrussi, Edmund de Waal, Ephrussi family, Louvre, Marcel Proust, Menier family, Moïse de Camondo, Musée des arts décoratifs, Musée Nissim de Camondo, Parc Monceau, The Hare with the Amber Eyes. Bookmark the permalink.

10 Responses to The collectors