Paris in the First World War

It’s that time of year again. The poppy-sellers are out on the streets of Toronto, and soon, on the eleventh hour of the eleventh day of the eleventh month, we will stop what we are doing for a minute or two and think about those who have died in wars both recent and remote.

Sufferings and betrayals in Paris under the German Occupation in the Second World War have been recorded in many memoirs, novels, and movies, but the literature on the city in the First World War is more sparse. I decided to look through our collection of postcards and books to learn more. 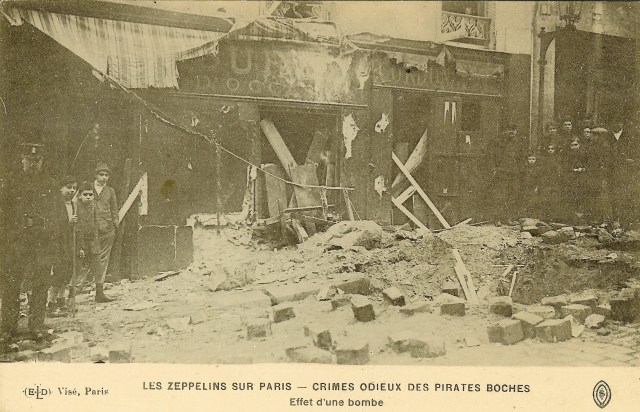 I have two postcards showing Zeppelin damage. Compared with what was to come later, the destruction was fairly limited. The first postcard shows a damaged shopfront (it had sold secondhand goods) and some scattered cobblestones. On either side, children line up to get into the frame of the picture. “Crimes odieux des pirates boches,” says the caption. Clearly the point of the postcard is to stir up anti-German feeling.

The shop was on the rue Ménilmontant in the 20th arrondissement. Look at the number 91 in the top right-hand corner. Amazingly, the building exists to this day – you can still see the distinctive heart-shaped wrought-iron decorations in the windows on Google Street View.

The second shows more damage, a house cut in half. Someone has written in a location (rue de l’Elisée), but this is wrong. A press photograph of the same site on Gallica (the website of France’s National Library) provides additional information: the raid took place on January 29, 1916, at 34, rue du Borrégo, also in the 20th (which seems to have sustained most of the Zeppelin damage). The owner, one sous-brigadier Bidault, was killed.

In all, the Zeppelin dropped 19 bombs that time, killing 54 people. A special funeral was held for them at Notre-Dame-de-la-Croix.

Much greater destruction took place towards the end of the war, when Germans used huge long-range cannons to shell the city from Picardy, 120 km (75 miles) away. Although the nickname “Big Bertha” was given to these cannons, in fact, there were two types. Big Berthas were howitzers, but the enormous “Paris Gun” was much larger and heavier with a longer range. This was the gun that fired a shell that fell came through one of the windows of St-Gervais during the Good Friday service of 29 March 1918, killing 88 people.

Even so, compared to cities in northern France, Paris emerged from the war relatively unscathed, at least in terms of its streets and buildings. Much more damage had been done in 1870-71, during the Siege and the Commune. Nor did Paris suffer under German occupation in the First World War, the fate of cities such as Lille.

Rather, citizens suffered from shortages and privations, from bereavements as sons and husbands were killed in trench warfare, from the unrelenting pressure of uncertainty as the war dragged on year after year. The city was filled with war wounded and refugees. Life went on in the cafés and shops, and the black market offered luxuries to those who could afford them, but for most people, it was a bleak period of survival and waiting. News was scarce.

I have two postcards from the Front. The first one was not sent to or from Paris, but it is typical of army correspondence on preprinted cards at that time. H. Vincent, réserviste, writes at some length, with atrocious spelling, to say he has no news. He was serving with the C.O.A. (Commis et Ouvriers militaires d’Administration) – the administrative corps that supported the army. If I’m reading his writing correctly, he was in the 5th  Section of the COA, attached to the 55th Division de Réserve. He writes to Eugène Bailly, also in the C.O.A., 11th Section, stationed in Nantes. Nantes was a huge military centre during the war, with barracks and hospitals for both French and (later) American soldiers. 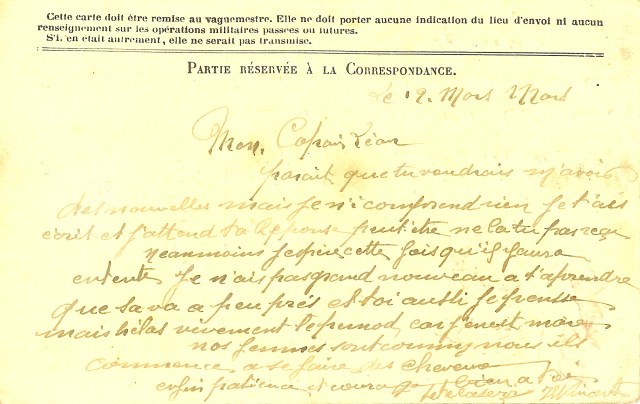 H. Vincent ends his message with “enfin patience et courage, bien à toi.” The postmark is obscured, but I know that it reads “Tresor et Postes,” the French military mark. It is impossible to make out the year. However, by comparing my card with images of similar cards online, I believe it was sent early in the war, because the printed part resembles that of other cards sent in 1914. 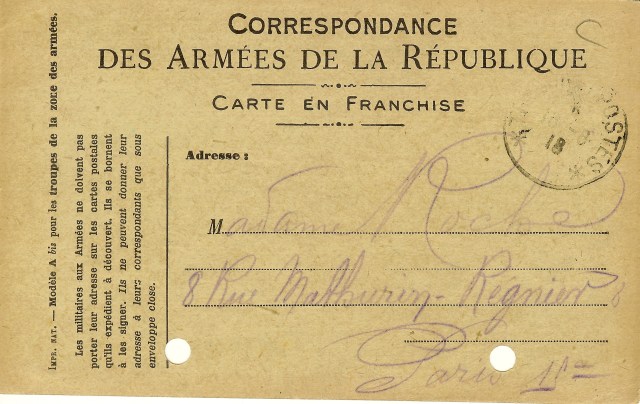 The second was sent in August 1918, as the war was finally turning in favour of the Allies. Gone are the flags and coloured printing – the card has been stripped down to the essentials. A soldier (last name Roche) informs Madame Roche (his wife? his mother?) that he was well (alive and not wounded). She lived at 8, rue Mathurin Régnier, in the 15th, in a house that is still there.

There is nothing more on the card (nothing further was allowed), but probably to his wife or mother, that news was enough and she was glad to receive it.

My last view of First World War Paris comes from the 2001 book by Margaret Macmillan on the Paris Peace Conferences (titled Peacemakers in the U.K. and Paris 1919 in Canada and the U.S.). She describes the city as it appeared to the delegations in January 1919:

Signs of the Great War that had just ended were everywhere: the refugees from the devastated regions in the north; the captured German cannon in the Place de la Concorde and the Champs-Elysées; the piles of rubble and boarded-up windows where German bombs had fallen. A gaping crater marked the Tuileries rose garden. Along the Grand Boulevards the ranks of chestnuts had gaps where trees had been cut for firewood. The great windows in the cathedral of Notre-Dame were missing their stained glass, stored for safety; in their place, pale yellow panes washed the interior with a tepid light. There were severe shortages of coal, milk, and bread. French society bore scars too. While the flags of victory fluttered from the lampposts and windows, limbless men and demobilized soldiers in worn army uniforms begged for change on street corners and almost every other woman wore mourning.

The city would not remain sad for long – the hectic gaiety of the 1920s was just around the corner – but for the exhausted populace, peace had not come too soon.

Parisian Fields is the blog of two Toronto writers who love Paris. When we can't be there, we can write about it. We're interested in everything from its history and architecture to its graffiti and street furniture. We welcome comments, suggestions, corrections, and musings from all readers.
View all posts by Parisian Fields →
This entry was posted in Paris churches, Paris history, Paris postcards, Paris streets, World War I and tagged Big Bertha, Brigadier Bidault, Eugene Bailly, First World War, Margaret Macmillan, Menilmontant, Nantes, Paris 1919, Paris Gun, Peacemakers, rue Mathurin Regnier, St-Gervais, Zeppelin. Bookmark the permalink.

21 Responses to Paris in the First World War