Visits to Paris flats or offices often begin with the ubiquitous buzzer and intercom, or the guarded keypad entry code, followed by the click and release of an electrically operated door lock. Mail goes into small boxes in the lobby. However, there are visible remnants of earlier times, when the door knocker announced a visitor or delivery and mail came through a slot in the door. One finds them simply by walking about Paris. 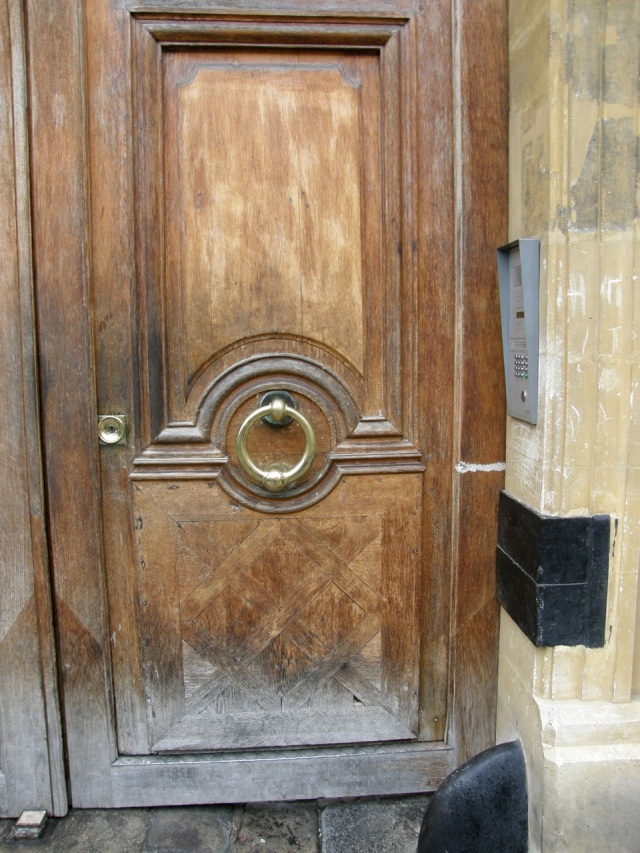 What a wonderful combination of the old and new. On the right, we see two variations of the chasse-roues I wrote about a couple of weeks ago. Above those, the modern intercom and keypad, then the pièce de résistance: a well-cared for brass door knocker on a beautiful old oak door. 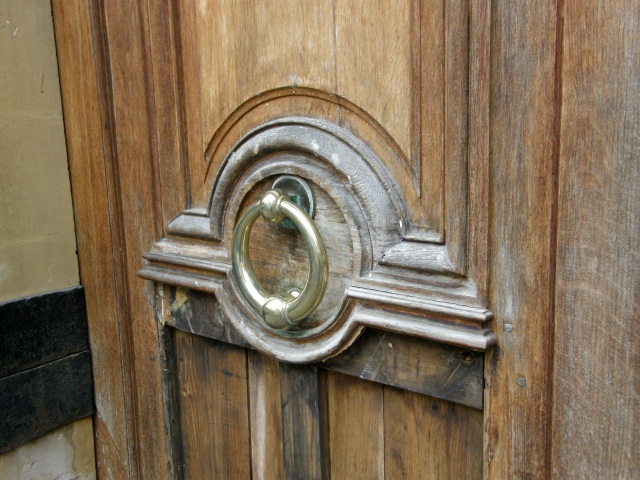 Sometimes the patina of age seems loving even if a bit lacking in routine care. Nonetheless I find the sturdy door and knocker shown below immensely attractive. It appears to be made of iron which has rusted to an unusual colour. 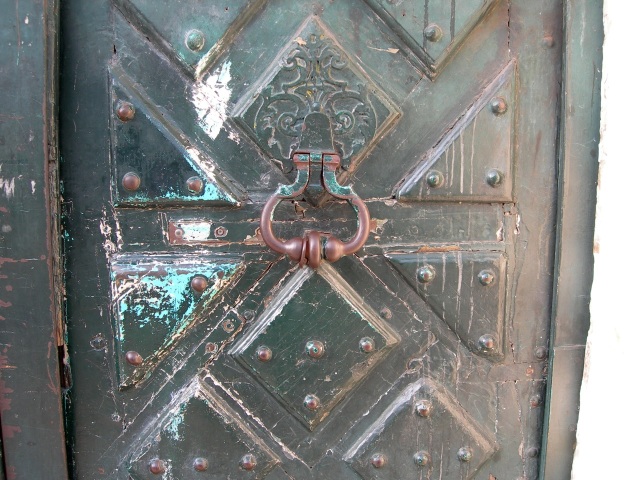 In this door with its traditional green paint, the ornate door knocker stands proudly. And the angle iron on the right side of the door speaks of a desire for added security. 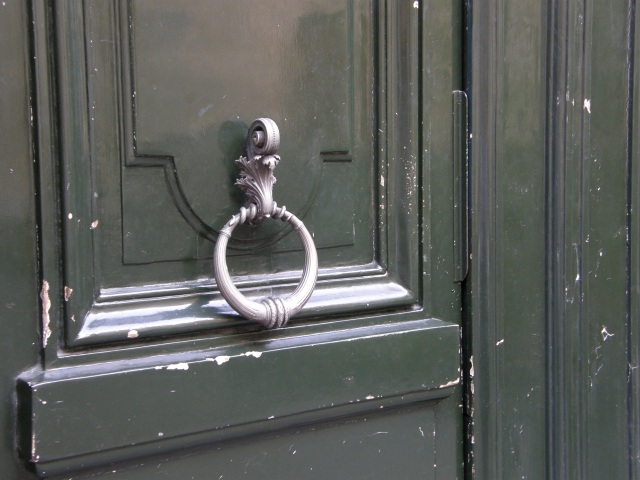 Not far from an artist’s studio in the 16th designed by LeCorbusier (whom I have not forgiven for robbing one Charlotte Perriand for much of the credit due her), I was captivated by the doorway, cast iron grille work, traditional lace window covering, the typeface of the ever-so-carefully mounted house number and then the door knocker, a cast iron hand hanging down ready to work. But just in case, there’s the back-up doorbell button. 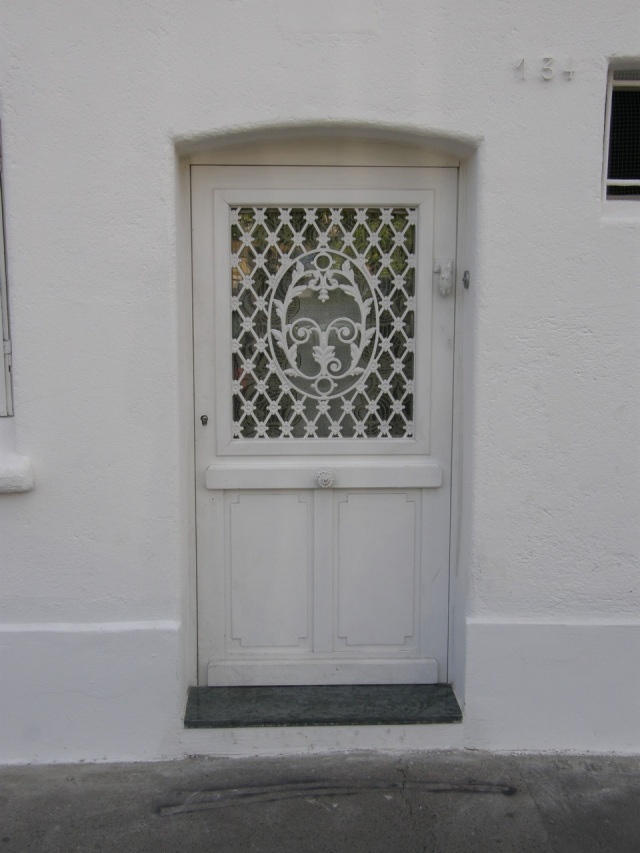 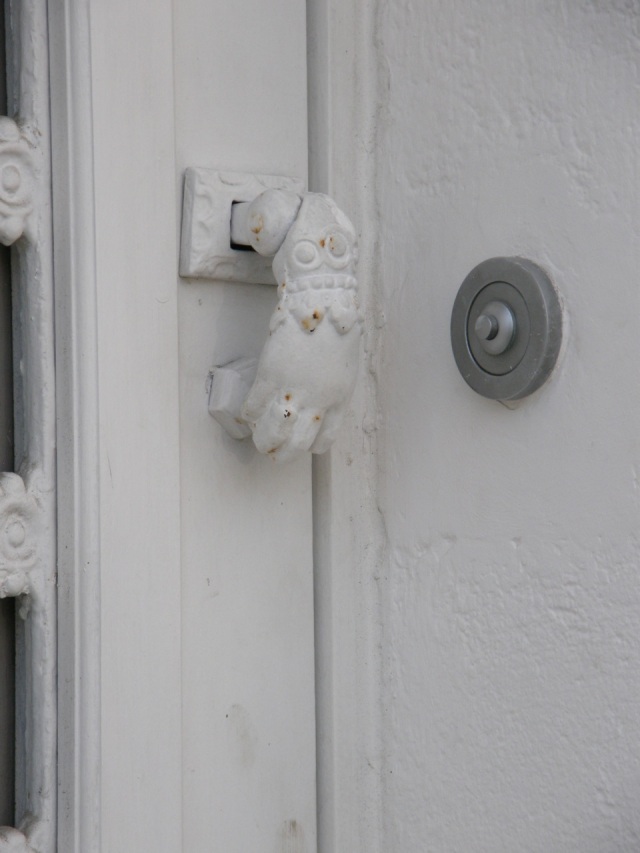 At a time when there was much talk of grève générale (general strike) the owner of this door knocker attracted our attention with the suggestion it was time to relax a bit, or chill, to have a rêve générale (general dream). It was a grey overcast day and the image is not completely clear, but perhaps that is more dreamlike. 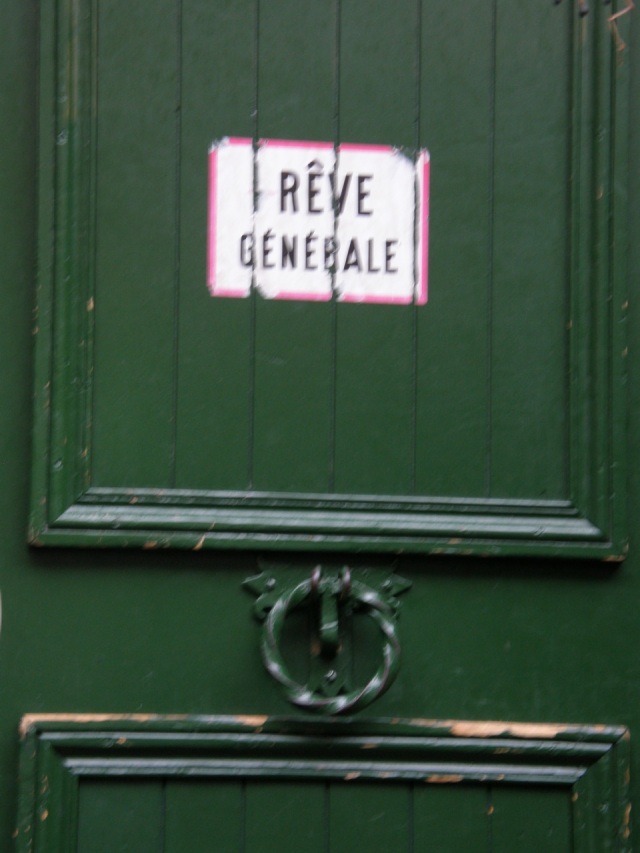 As for mail slots, there is again the range of styles that make Paris so interesting. As we walked along a quiet street, this one caught my eye. First because it blended in so unobtrusively, and I liked its strong but understated decoration. And because it was in English. 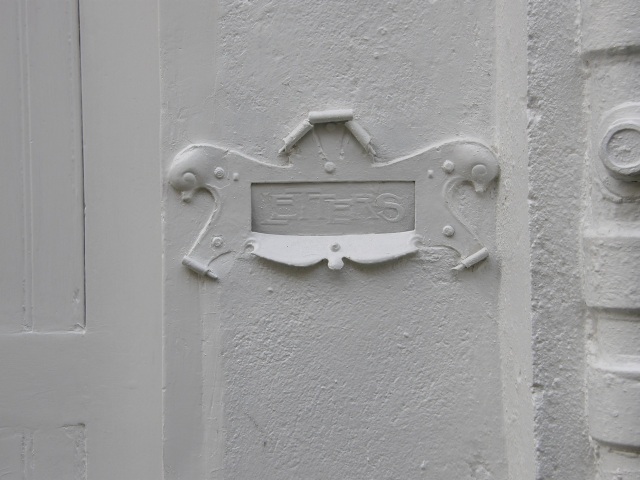 This functional secure door, which led through a wall facing onto a quiet street, had the usual key pad and intercom. However, the mail slot was there ready to receive suitably discreet deliveries. 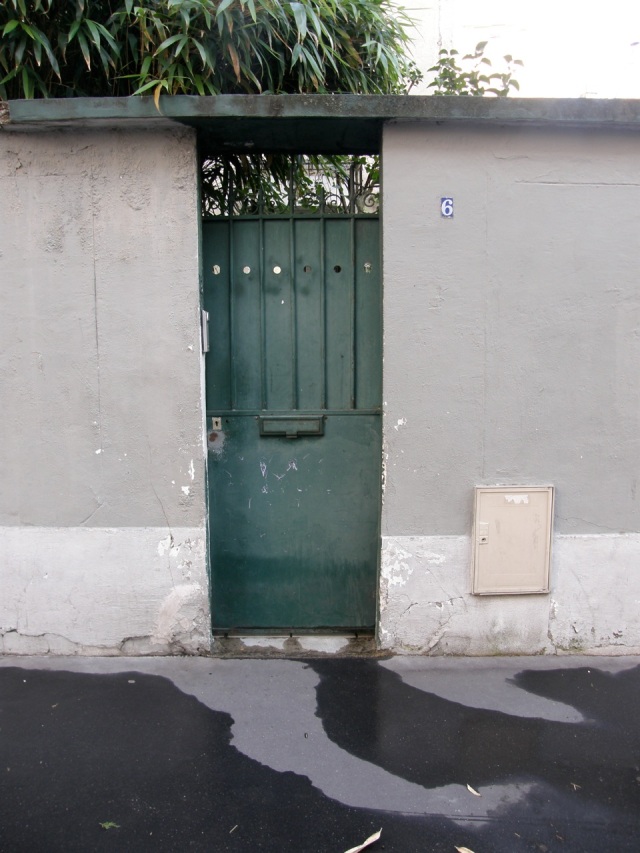 And not far away, a gorgeous yellow door came complete with a black metal door knocker mounted about eye level, a mail slot lower down and an metal knob to open the door. I have often seen these made of polished brass. But with such a strong yellow, polished brass would clash and seem over the top (loosely translated as un peu trop). 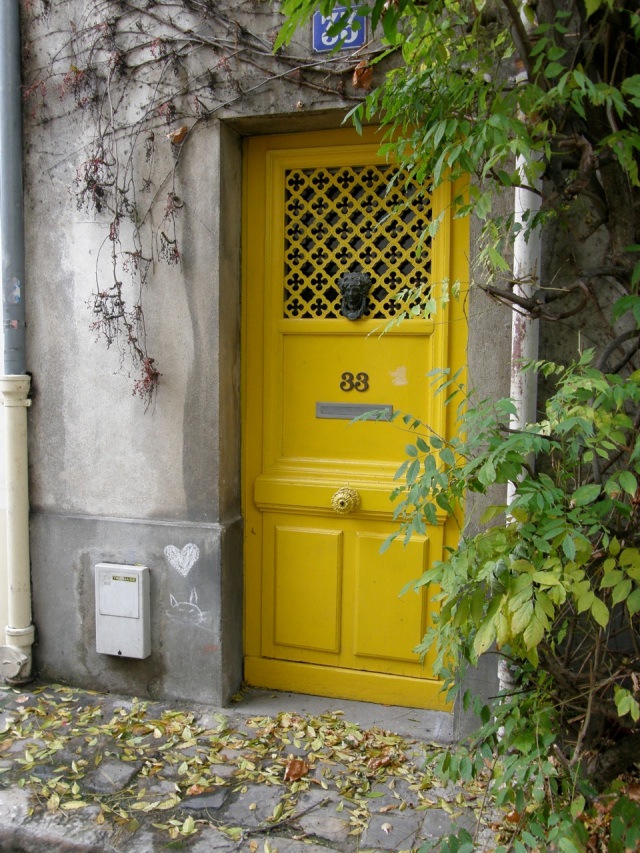 On a morning’s walk in the 14th, this juxtaposition of traditional mail slot and modern recycling bin somehow spoke to me of just what makes Paris right for me. 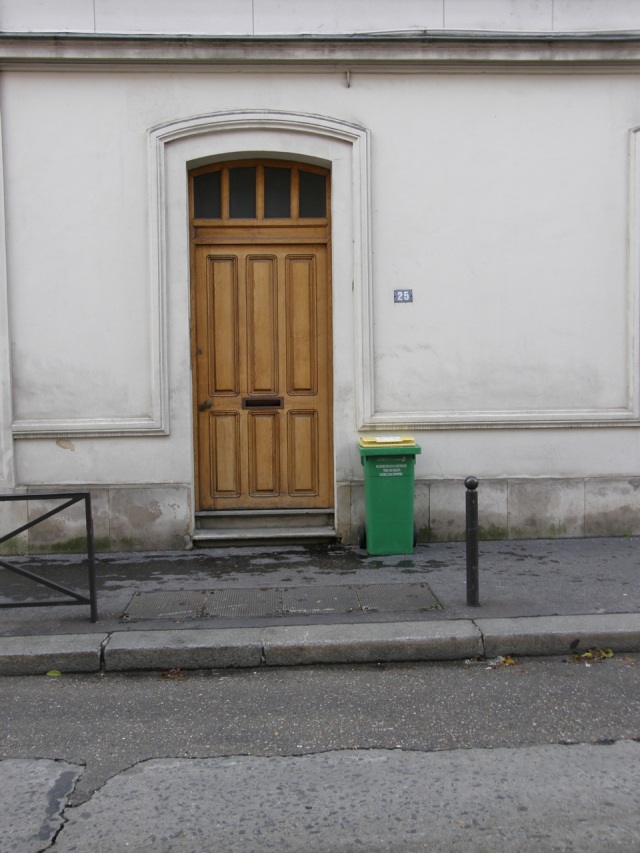 In April 2006, I took the photograph below in a small cul-de-sac. The telltale signs of gentrification were all about. I wonder if this door and mail slot are still there. And if they are, what colour have they been painted. The design, bamboo plants (faintly visible on the right) and intimacy reminded me of some backstreets and alleys I found in Beijing during two trips there in the mid 1990s. 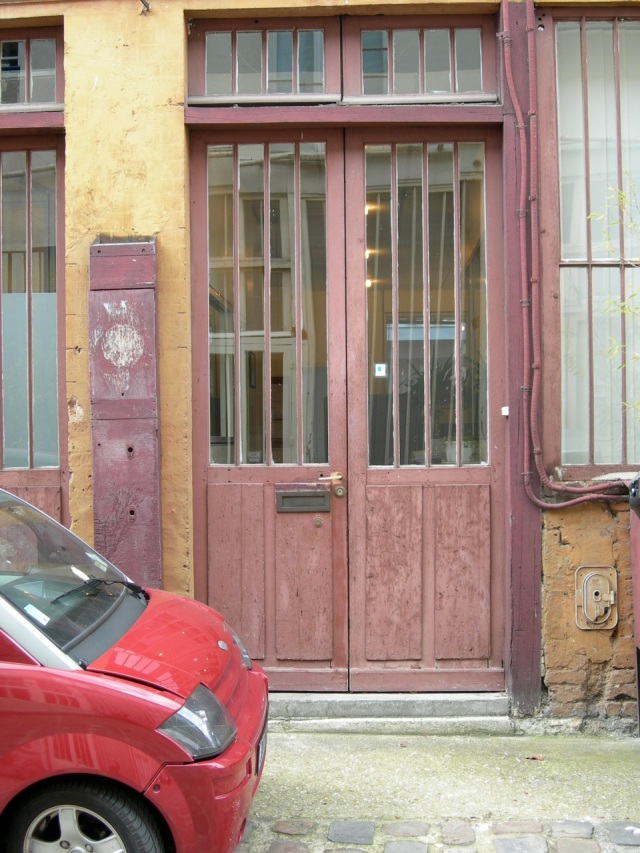 And as I bring this to a close, I wonder if I should include this image in a blog devoted to the art of the door knocker? It is one of a series of photos I took of one of the most beautiful elevators I have ever seen. It is not polished to within an inch of its life. Rather, graceful design has been overlain with the sheen of age. 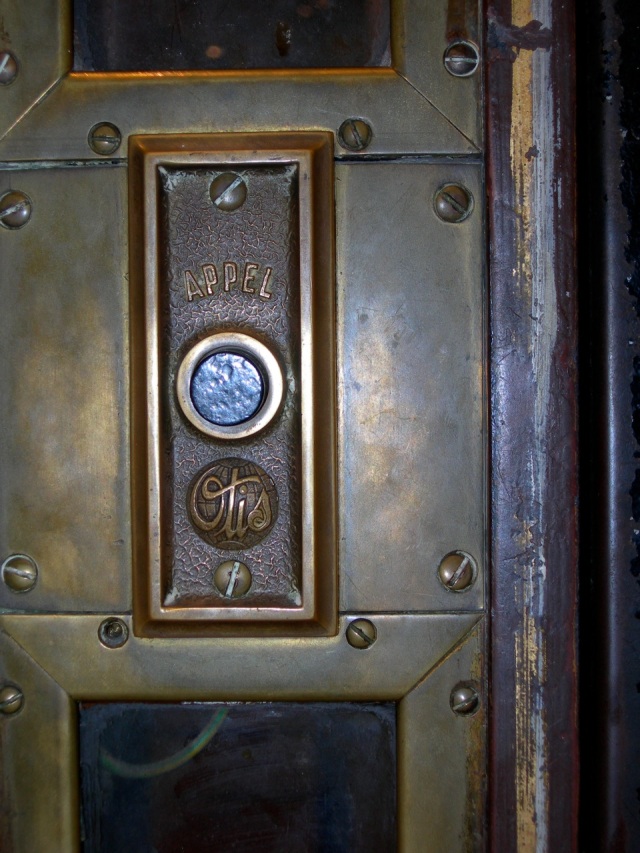 With its stunning stained glass dome and rich details such as this, I would feel I had failed Paris if I did not spend some time at Galeries Lafayette on each visit.

Don’t get me wrong. There is a place for polish when well done. It is not about making ornate brass mirrorlike, but about highlighting depth and features, complementing artistry, inviting light to play. 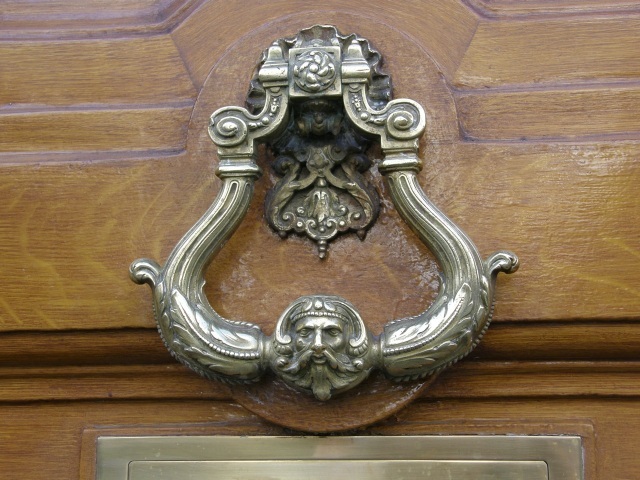 Text and photographs by Norman Ball.

Parisian Fields is the blog of two Toronto writers who love Paris. When we can't be there, we can write about it. We're interested in everything from its history and architecture to its graffiti and street furniture. We welcome comments, suggestions, corrections, and musings from all readers.
View all posts by Parisian Fields →
This entry was posted in Paris streets and tagged Charlotte Perriand, chasse-roue, digicodes, door knockers, doorbells, doorways, Galeries Lafayette, intercom, keypad, Le Corbusier, letter boxes, letter slots. Bookmark the permalink.
Loading Comments...
%d bloggers like this: