Posted on November 1, 2020 by Parisian Fields

A November day some years ago. We are dawdling by the Seine when we spot a barge filled with coal being pushed up the Seine.

Two days later, we are exploring the Parc André Citroën. As we cross over to the right bank, we see demolition rubble being loaded onto another barge, this one with movable metal coverings over the holds.

On another day, after a visit to Le Petit Palais, we are crossing Pont Alexandre III and notice a colourful barge loaded with cardboard bales headed for a recycling depot.

Barges, or péniches, do the heavy work of getting bulk freight into and out of the city.*

The term péniche may be translated as a barge or a narrow boat. There are other uses for the term, such as péniche de débarquement, which is a military landing craft. For civilian craft, those that have their own power source are called péniches automotrices. But in everyday parlance, pretty much everything used in commercial water traffic gets called a péniche, whether it has its own power source or is pushed or towed by another vessel.

The term chaland, or canal barge, generally refers to the very narrow barges built for English canals. They are not used as modern cargo carriers, but are popular as dwellings and vacation boats. We once saw one of these boats in the locks at the Bassin de l’Arsenal.

Péniches have a long history in French waterways. Let’s look at a few historic images.

In the photo below, the boat in the foreground has the traditional look of a péniche. The turning basin of La Villette saw many péniches, coming, going, loading, and unloading. The pile of stone held by a wooden retaining wall was undoubtedly unloaded from a péniche at the site.

The next photo, taken by Eugène Atget in 1923, provides a moody depiction of two péniches in the quays. The large buildings and boats disappearing into the background on the far bank of the Seine add to the sense of a still foggy morning. It is all rather dreamlike, but was probably cold and damp.

This one, taken in the early 1930s by François Kollar (1904-1979) at the quai de Grenelle in the 15th arrondissement, says much about the look and traditional role of péniches. They provided Paris with large quantities of relatively low-cost, heavy, bulky goods. In this overhead view, workmen are unloading slender logs cut to uniform length. The pile in the background stands ready for the winter and would diminish as temperatures dropped. Before delivery to furnaces and fireplaces, most would be cut to shorter lengths.

This 1936 photo of péniches flanked by large warehouses at the Bassin de la Villette reminds one of the closeness of parked cars in Paris. The two most prominent péniches in the photo show the movable metal panels that protected cargo that was either sensitive to exposure to the elements or was likely to be stolen.

Péniches served as more than just freight carriers, though. The interior of this ambulance péniche, photographed in October 1914, is spartan. It appears to have only stretchers surrounding the central stove. Stretchers would have been in great demand at the time.

A month later, this is the interior of one of the ambulance boats established by l’Union des Femmes de France. This interior is much less grim, with flowers and proper beds for patients.

The next photo is perhaps one of the most unusual péniche interiors and it comes with a story of links to fame and compassion. It shows the interior of the Louise-Catherine.

Here’s the back story. Born in Munich in 1856, Maria Louise Katharine Breslau moved to Paris in 1874 to study art at the Académie Julian. In less than five years she had opened her own studio and dropped Maria from her name. Her career can be described as meteoric and in 1879 she joined the Salon de la Société National des Beaux-Arts in Paris where she exhibited her work and served on the jury. Louise-Catherine was the third woman artist and the first foreign woman artist to be honoured by France’s Legion of Honour. While a student, she made friends with Madeleine Zillhardt, who has been described as her muse, model, confidant, supporter, and companion of more than 40 years.

Upon Louise Catherine’s death in 1927, Madeleine Zillhardt inherited the bulk of her estate. With the support of Winaretta Singer, Madeleine purchased a péniche and named it Louise-Catherine. This was not destined to be an ordinary vessel. It was redesigned by Le Corbusier as a 160-bed Salvation Army shelter for homeless men. The Salvation Army closed it in 1994 after the hull flooded.

Regrettably, the vessel, now owned by the Fondation Le Corbusier, sank during the February 2018 flood of the Seine, just as it was being renovated to become a new cultural space. We took this photo about a year before it sank. The vessel was refloated in September 2018 but its future is uncertain.

If one péniche honoured an accomplished painter, another artist used a péniche as a home and studio. In about 1925 the barge shown below was the Paris home of Henri-Gaston-Jules-Louis Buoy, known as Louis Buoy. He worked primarily in pastels and was noted for his female figures.

Fashion designer Paul Poiret is less well known today than his rival Coco Chanel. However, Poiret was famous for the hobble skirt and harem pants (one hobbled women, the other freed them). At the International Exposition of Modern Industrial and Decorative Arts in Paris in 1925, an invitation to dance on Poiret’s péniche Orgues must have been a prize reserved for the wealthiest or most well-connected. Surely no péniche had a more distinguished, or shall we say, theatrical ceiling. It was not Poiret’s only péniche. There were also Amours and Delights, for example.

Delights featured up-to-date fabric curtains, cove moulding, and recessed lighting. What appears to be a movable divider probably separates the dining area from the kitchen. Delights seemed an excellent place to imbibe, dine, and enjoy life.

And if the temptations of Poiret’s péniches led one astray, there was always the Chapelle des Mariniers, Pont St-Michel, a péniche that held out the opportunities for redemption, shown here in an Yvon postcard from our collection.

But these unusual barges were the exceptions.

This early-20th-century postcard from our collection shows a more typical group. Péniches on both banks are strikingly similar in size and configuration. Those on the left bank show the large rudders and on the right bank the rather stubby bows. This is the same location as the photograph by Atget.

The history of the péniche cannot be separated from the history of French canals. And if there is one man who stands taller than others in creating the modern canal systems of France, it is Charles-Louis de Saules de Freycinet (1828-1923). Freycinet graduated as an engineer from the prestigious École Polytechnique and joined the French Civil Service as a mining engineer. He eventually rose to the position of Inspector General of Mines in 1883. He also served four terms as premier.

Nineteenth-century economic growth and industrialization created a need for better transportation systems. Elected to the Senate in 1876 and named Minister of Public Works in 1877, Freycinet instituted the Freycinet Plan, whereby the government purchased existing railways and built extensive new ones. It also tackled the question of increasing uniformity in the canals and reducing the need for trans-shipment.

A law of August 5, 1879, established a minimum lock size of 39 metres long, 5.2 metres wide, and 2.2 metres deep. To pass through the locks, péniches were limited to 38.5 metres long, 5.05 metres wide, and 1.8 metres draught or depth. Clearly, a tight fit was the order of the day. New canals were built and many existing ones re-engineered to fit the Freycinet standard.

Freycinet’s influence was so great that canal traffic doubled between the opening of the 20th century and the Second World War. His work endures. By 2001 there were 5,800 km (3,604 miles) of navigable waterways in France that corresponded to the Freycinet gauge and these accounted for 23 percent of waterborne traffic. Over time, though, the size of many vessels has increased beyond the dimensions in the Freycinet standard and today we see many of these larger vessels on the Seine. But even as vessels changed in size and configuration, the names remained the same: a péniche is a péniche is a péniche. 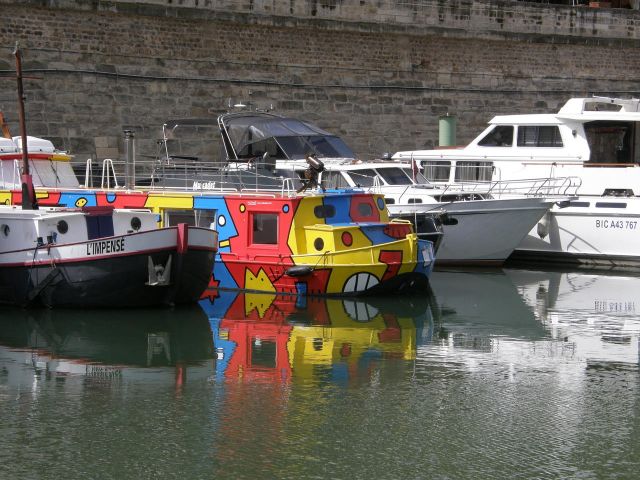 * In 2019, Ports of Paris announced that more than two million tonnes of merchandise, from building materials to consumer products, entered Paris by boat, an amount that would otherwise have required 100,000 trucks to transport.