We weren’t expecting Paris to be sizzling in early June. We’d emerged from a cold, wet Toronto spring, armed with suitcases full of cardigans and long-sleeved shirts, only to plunge into high summer. Isn’t Paris supposed to be intolerably hot only in August? We once endured a steamy August in Paris and had sworn never to repeat the experience. 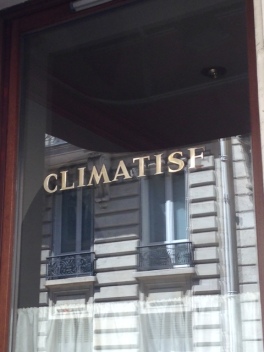 Air-conditioning is gradually becoming more common in shops, restaurants, and hotels in Paris (look for the signs saying climatisé), but it is still quite rare in private apartments. We had rented a flat from an acquaintance and we asked her if the place contained an electric fan. She sounded baffled and explained that it was simply a matter of airing the place out in the morning, then closing the windows and curtains during the day, and reopening them at night.

We complied, but the first night was still too sweaty, so the next day we bought a fan at a local droguerie. For the next three weeks, it cooled (or at least moved) the air in the bedroom at night, and we slept more comfortably. (Norman loves the word droguerie, which to him means where you go to buy things for home drudgery. On various visits we have bought a boy-scout-style can opener, shoelaces, lightbulbs, a fly swatter, cleaning products, and a collapsible clothes-drying stand.)

We soon realized that coping with the heat was going to require a strategy, and a fairly old-fashioned one. Walk slowly, on the shady side of the street. Wear 100% cotton or linen (we bought linen shirts at Alain Figaret and the Bazar de l’Hotel de Ville). Drink lots of cool liquids (Badoit, Orangina, Sancerre).

Seek out green spaces and benches. Take frequent cool baths (the bathtub in the flat is huge, deep, and surrounded by dark varnished parquet for reasons that escape us, but we appreciated it enormously). 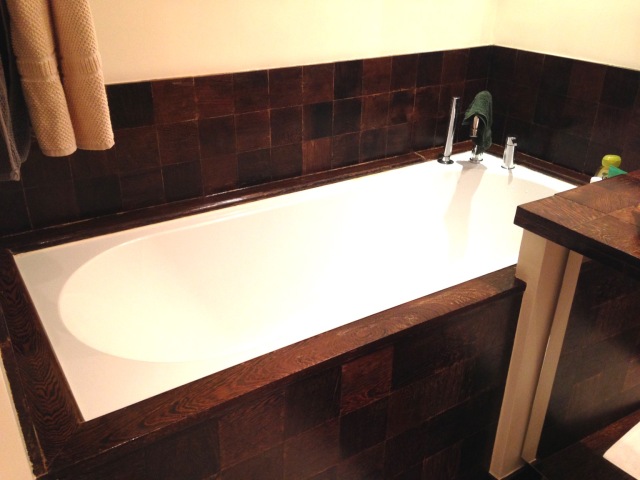 We feasted on cold food – salads made with frilly lettuce from the nearby street market, gazpacho sold in small containers at Carrefour, goat’s cheese on baguette, and lots of fruit (notably cherries and apricots). 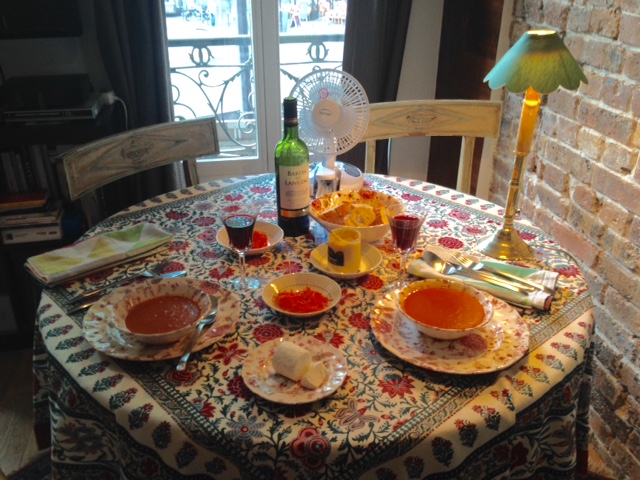 We discovered the ice creams and sorbets at the nearby Picard frozen food emporium: réglisse became Norman’s favourite and raspberry with litchi was Philippa’s. In fact, Norman has decided that gazpacho and licorice ice cream are possibly his two favourite foods in the world. 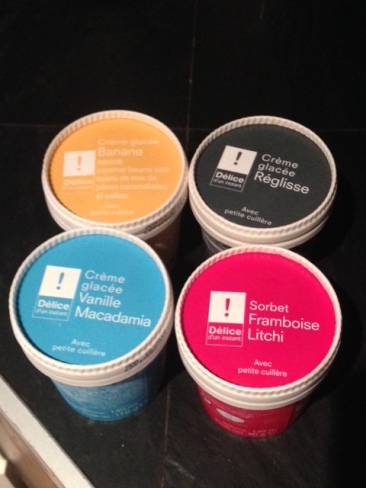 Despite our efforts, we still had to endure some stifling bus rides and humid Metro journeys, but on the whole, we managed. Paris is a city of windows that open and thick walls that help regulate interior temperatures. We lingered in museums with gardens: the Musée de la Vie Romantique and the Musée de Montmartre both offer green retreats with cool refreshments.

We also became more aware of other people’s efforts to keep cool. We loved the Star Wars effect of this outdoor fan at a sidewalk café; the obverse of the heaters café owners use in cold weather that sometimes make dining outside actually too hot in winter. 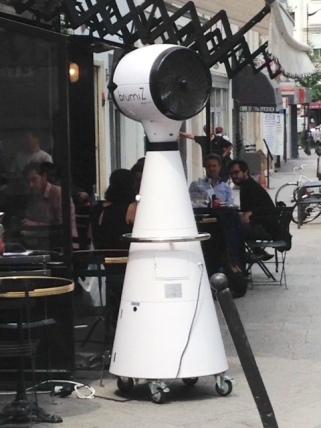 We gained a new appreciation of shutters and awnings (about which we have already written). And we have decided that we need to rethink how we deal with heat in our home in Toronto. Ask us in six months what has changed. 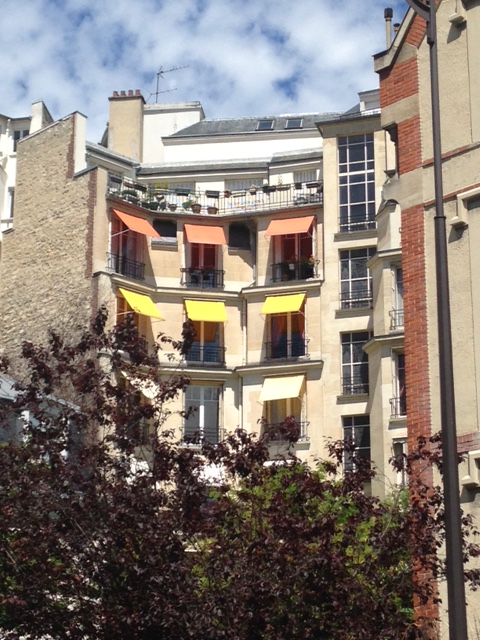 Given our new obsession with ventilation, we suddenly became aware of a feature of many Paris buildings that is so common that nobody notices it: the grilles underneath the windows at street level. 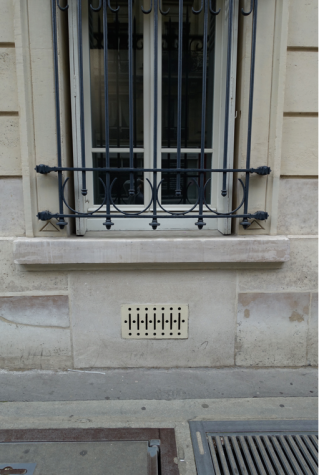 In an earlier blog, we mentioned these panels, most of which provide ventilation to the sous-sols (basements), although a few once provided air for cupboards built into the space below the windows that kept foodstuffs fresh in the years before refrigeration.

As always happens, once you become aware of something that was previously an unremarked bit of the scenery, you begin to spot the many variations on a theme (this also happened when we first became aware of chasse-roues/boute-roues).

We began to photograph these ventilation panels. Warning: do not try this yourself unless you do not mind getting stared at. Passersby look at you, then look at what your camera is pointing at, and then look back at you with an odd expression on their faces. Why are you interested in that? Here are a few examples from what became a large collection. 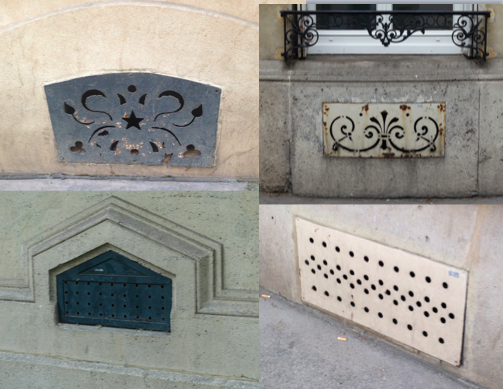 Some are ornate or fanciful. Some are mundane and functional. Some date from the 19th century; others are more recent. The older ones may have been around at the time of the Paris flood of 1910 and contributed to the flooding of basements and subterranean spaces.

In a few cases, we were able to peer in. Mostly the immediate interior was full of rubbish. Sometimes the spaces behind seemed to drop down to infinite depths.

What lurks down there? Whatever it is, it is cool and wet and does not fear the heat. And, having survived a Paris heatwave, neither do we. 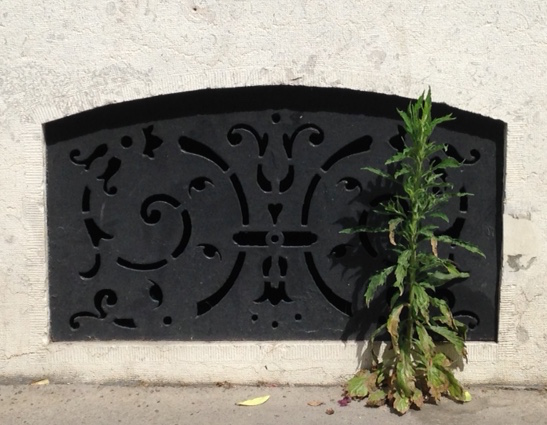 Parisian Fields is the blog of two Toronto writers who love Paris. When we can't be there, we can write about it. We're interested in everything from its history and architecture to its graffiti and street furniture. We welcome comments, suggestions, corrections, and musings from all readers.
View all posts by Parisian Fields →
This entry was posted in Paris travel and tagged Alain Figaret, Bazar de l'Hotel de Ville, Carrefour, climatisation, droguerie, Flood of 1910, Musee de la Vie Romantique, Musee de Montmartre, Picard, shutters, ventilation. Bookmark the permalink.

23 Responses to Coming to terms with the heat in Paris