Getting married in the City of Light

Many people dream of getting married in Paris. How romantic. How fashionable. Like this 1998 image of a Christian Dior wedding gown on a beautiful model, a Paris wedding seems like a dream too good to be true. 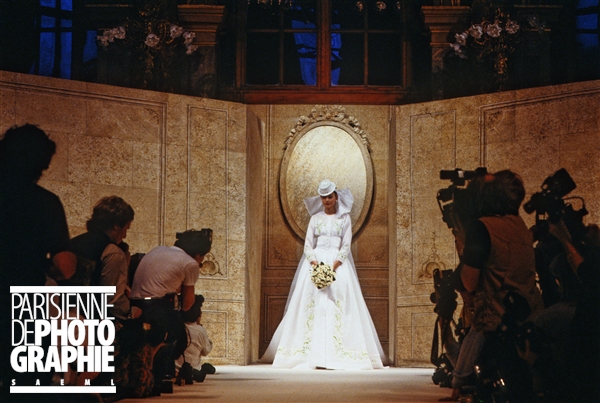 The fantasy element appears in many photographs of Paris weddings. You might think that “themed” weddings are a recent fad, but consider this image from 1952. For some, the perfect wedding mirrors a sport or hobby of choice. Here the bride and groom are fencers who walk arm-in-arm beneath a bower of fencing foils. Perhaps they met over crossed swords.

Even in hard times, Parisians maintain their sense of style. During the Occupation, gasoline and many others things were in short supply and bicycle taxis were the norm. One wonders about the bride and groom shown here in December 1941 at the Place de la Madeleine. They are elegantly attired and the bicycle is beautifully decorated. She looks radiant; the groom seems a little tense. One hopes they survived and that many years later looked back nostalgically at that important day. Perhaps they marvelled together at how much life had improved since those days.

And then there are the wedding parties after the ceremony. This one, during “La Fête de l’eau” festival in 1939 at the Piscine Molitor looks like quite the bash. Is that the bride in the kayak? 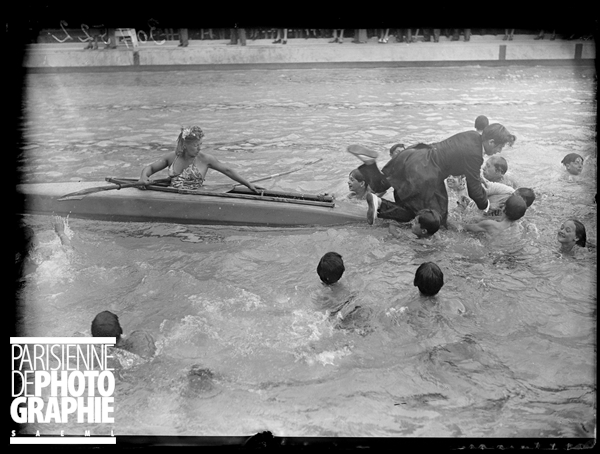 But not all of the wedding images reside in photographs. One day in the Saint-Mandé paper market, Philippa and I purchased a bound volume of the weekly illustrated supplements of Le Petit Journal for 1909.

Le Petit Journal presented an often sensational picture of Paris, France, and the world. It revelled in accidents, crime, assassinations, fierce animals (particularly those intent on eating someone), war, and general gore and misfortune. Le Petit Journal also covered weddings, but there had to be a sensational element. It seemed that 1909 was a good year for unusual weddings, because we found several illustrations on this theme. In fact, these images are what prompted this blog.

The illustrations are all anonymous. Apparently, from 1904 to 1914, very few of Le Petit Journal covers were signed. The paper relied on a roster of illustrators,* and perhaps a trained eye could discern who did what. However, the paper duly credited its printers (C. Marty at 61, rue Lafayette), the type of printing press used (Marinoni), and even the ink maker (Lorilleux).

Here is an example from May of that year. Try as one might for a quiet outdoor reception, there was always the possibility that unexpected guests might descend upon the wedding party from their balloon. It is important after all to make a grand entrance, as did the two members of the Aéro-Club who dropped in, joined in the festivities, wished all well, and then returned to Paris.

By 1909, safety bicycles had replaced the older and more hazardous high wheelers. So why not put bicycles front and centre on your wedding day?

An article inside the supplement informed readers that this was a wedding in Nice. Mr. Francois M., an employee of the Department of Posts and Telegraphs, and his bride-to-be, Miss Apollonie G., decided that they and their entire wedding party would all ride bicycles to the civil ceremony at the office of the mayor. The party of about 30 bicyclists, described as “les sportsmen and sportswomen” were cheered and caused quite a sensation at the city hall. The ceremony apparently went off smoothly and then bride, groom and their entire party remounted “les machines”  and headed off to a restaurant for a fine meal.

Sometimes one has to wonder what the bride and groom were thinking about. Roller skates for the entire bridal party? 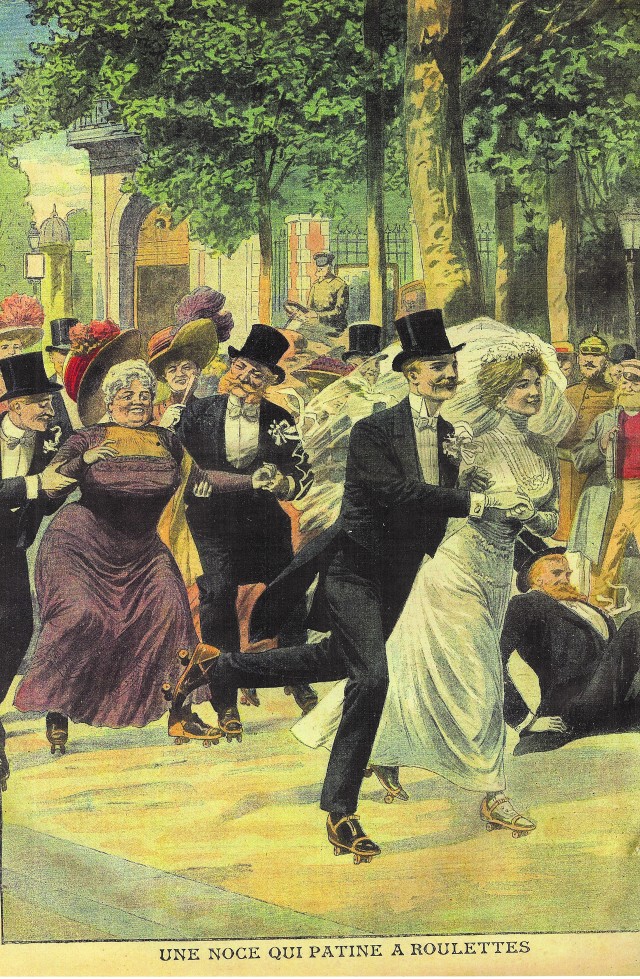 A few relatives had to be propped up by strapping fellows, but the entire wedding party arrived at city hall after a seemingly frantic race. Next stop, a church (many European marriages involved both a civil ceremony and a religious ceremony; only the first was obligatory) and then on they rolled “à la brasserie, ou on vida quelques tonneaux be bière pour étancher un soif que justifiait ce fatigant exercice.” Wait a minute…beer at a French wedding? Ah no, this was a German wedding (Le Petit Journal had an international outlook).

Continuing their international wedding coverage, Le Petit Journal portrayed an English wedding in Bildeston in the county of Suffolk. The groom, a local fireman, and his bride were pulled by his colleagues to the church on a decorated fire pump. After the ceremony the same apparatus transported them to their hotel for their wedding dinner.

Not everyone could draw on the appropriate professional paraphernalia to spruce up a wedding. One wonders if this lieutenant in the Montmartre fire brigade lamented the absence of pumps, pikes, and other bits of equipment for his 1920 wedding. However, he did get to wear his helmet. The bride looks ridiculously young. Is that her father with the huge pipe?

However, for youthful brides, it would be hard to beat this 1947 photo of a children’s fancy dress procession.

Everybody loves a wedding, and in Paris, nobody is too young to participate.

Parisian Fields is the blog of two Toronto writers who love Paris. When we can't be there, we can write about it. We're interested in everything from its history and architecture to its graffiti and street furniture. We welcome comments, suggestions, corrections, and musings from all readers.
View all posts by Parisian Fields →
This entry was posted in Paris history, Paris popular culture and tagged Le Petit Journal, marriage, Montmartre, Paris en Images, weddings. Bookmark the permalink.

5 Responses to Getting married in the City of Light