Our visits to Paris always begin and end with a trip through the outskirts of Paris. The train or taxi from the airport travels through residential and industrial suburbs, passing warehouses, high-rise hotels, office buildings, and large sports facilities. Beside the highway or railway track there are often heavily graffitied walls.

On one memorable occasion, when the highway was blocked by a strike, an enterprising taxi driver took us on small roads through the banlieue, cutting through gas station forecourts, parking lots, and back lanes to avoid the congestion. It was a fascinating journey through a part of the region we would never otherwise have seen up close.

Normally, at least part of the journey takes us along the Boulevard Periphérique, with its signs indicating the various “portes” (gates) – highway exits with names that commemorate vestiges of an older Paris.

A hundred or so years ago, visitors to Paris entered the city through actual gates in actual walls. Here is one typical example, the Porte de Reuilly.

The gates in this 19th-century wall all looked much the same – unlike the distinctive barrières created for the customs wall by Claude-Nicolas Ledoux before the Revolution.

The 19th-century walls and gates remained largely in place until well into the 1920s, although demolition of parts of the wall began shortly after the end of the First World War.

The Enceinte de Thiers, as it was known – after Adolph Thiers, the prime minister who proposed it, rather than the one who actually built it – was a defensive wall constructed in the 1840s, along with a ring of 16 forts outside the wall to provide additional defence. Here’s a map of the completed system from 1852:

The military authorities went about their task with all the subtlety of a sledgehammer. Small suburban villages like Charonne and Clignancourt were chopped in half by the wall. Fifteen forts bristled from St-Denis in the north round the east and south sides of the city, while a single one guarded the west. Clearly nobody expected anyone to attack from that side.

Not only was the wall itself very wide, but there were buffer areas on either side taking up even more space. Immediately inside was a 150m-wide open area (about 500 ft) known as the “Boulevards des Maréchaux” – those wide boulevards around the circumference of the city, named for military leaders, which later turned out to be the perfect size for modern tramways.

Outside the wall, there was a ditch and beyond that, the military authorities decreed that a 250m-wide (about 820 ft) space be left unbuilt – a “zone non aedificandi” – to allow for a clear range of fire as enemies approached.

(Of course, in the Franco-Prussian War of 1871, the whole thing proved to be a colossal failure in protecting the city from shelling from a distance. Interestingly, when the French army turned against the Paris Commune, Adolph Thiers was among those besieging the city – from the lightly defended west. So much for military far-sightedness.)

That “zone non aedificandi” already had some buildings on it, from old farmhouses to former hunting lodges. To these were added guinguettes (informal drinking places that operated outside the city’s walls and regulations), ragpickers’ huts, gypsy camps, and eventually, railway yards. Over time, in certain areas, the space became a shantytown. Its inhabitants were known as Zoniers.

In 1912 and 1913, Eugene Atget photographed the Zoniers of Ivry, who favoured horse-drawn caravans for their homes and business premises (minus the horses, of course). The wheels were handy if you had to relocate on short notice. 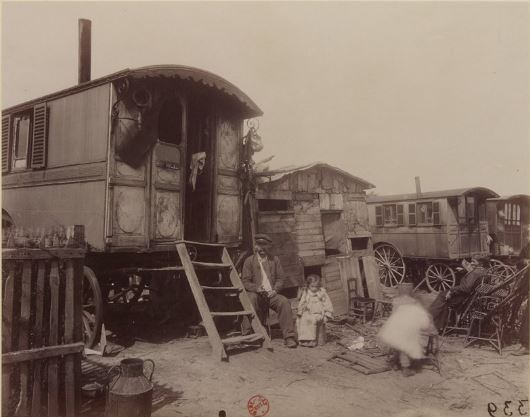 Here is his photograph of the Porte d’Italie, showing shacks used for collecting and sorting scrap metal.

No, it isn’t pretty. But scrap merchants and ragpickers are a useful part of the recycling economy and they have to work (and live) somewhere near their sources of supply and their customers.

The flea markets at the edge of the city (St-Ouen, Vanves) are an outgrowth of this kind of business. Over the course of the 19th century, people who collected other people’s rubbish were pushed out of the city as municipal garbage collection was established in the 1880s by the Prefect of the Seine, Eugène Poubelle (forever commemorated in the French word for a rubbish bin – poubelle). And those who sold whatever bit and pieces could be sold set up shop in the north and south parts of the Zone.

Here is a picture of an early flea market at St-Ouen. As a friend of mine used to say, “Things were dirt cheap – with the dirt thrown in.”

Some areas supported market and allotment gardens, another appropriate land use near the city.

But some parts of the Zone remained as open ground, even after the wall came down. When I went to look for photographs of the Zone, I found a series of 17 photos held by the Bibliothèque Historique de la Ville de Paris. They were taken after the demolition of the wall. Here is one example.

At first, the photographs seemed to be banal views of a largely empty landscape. At first.

The record attached to the photographs states that they date from 1920–50, but they were clearly taken at the end of that period. The record also did not specify where they had been taken. That omission immediately made me determined to find out. Since certain buildings and objects appeared in several photos, I gathered they were all taken in the same general area. So I peered more closely at the photos for clues. At that point, I began to see all kinds of details.

A tall industrial chimney, a boulangerie/patisserie, a huge and unidentifiable machine, a distant church spire, large houses in the banlieue, lampposts and paved roads, including a tree-lined avenue.

A few photos showed some small houses in the Zone (one with “chien méchant” written on the gate and another with a prominent electrical connection), so there were inhabitants and businesses. There were several parked cars here and there.

And people. A surprising number of people, a man working in a scrap yard, and some women and possibly children partly hidden in the long grass. Residents of the shacks? People from the nearby apartment blocks taking the air? Hard to tell, really.

What allowed me to identify the location was one of several multi-storey brick buildings in the frame. These were HBMs (habitations bon marche) or affordable apartments. In an excellent and well-illustrated online document about the HBMs of the 1920s and 1930s built around Paris’s circumference, I spotted a window that looked familiar. Sure enough, it was from one of the buildings in the photos. The caption gave the street name, and I was able to place the photos has having been taken near the Porte de Vincennes. The HBMs are still there, but what was once a terrain vague is now the site of an elementary school.

As for the date of these photographs, the crucial clue was one of the cars parked on the street, much more recent than all the others in view. I learned that the licence plate was of the type introduced in France in 1950, but I couldn’t identify the car itself.

So I turned to Donald Pittenger, who writes the Car Style Critic blog, and within a day, I had my answer. It is a Ford Vedette, c1953. The photos are more recent than I at first realized.

Finally, what struck me was the fact that on the other side of the terrain vague was the banlieue. You could just walk across and into it. This was possible only during the years after the demolition of the wall and before the construction of the Periphérique. Less than a generation.

Those apartment buildings visible on the left, built in 1936, still stand in the Commune of Saint-Mandé. The roof on the right, just visible above the trees, belonged to one of two hospices on the site, of which the Hospice St-Michel remains.

Once again, the engineers – this time, traffic engineers – prevailed, and cut through what might have been some reconnected neighbourhoods, united rather than divided by a strip of green. Once again, Paris was walled in, with only gates to the outer world, but this time the barrier consisted of traffic. Will the Periphérique last as long as the wall it replaced? Only time will tell.

If you would like to see a wide range of paintings and photographs of the walls, the gates, and the Zone, I highly recommend the meticulously documented and exhaustively researched website “Les Fortifs” by Laurent Baziller. The text is in French, but there are hundreds of images to browse through.

10 Responses to The Zone