When French is not your first language, every visit to a French supermarket is like walking into a three-dimensional visual dictionary. Even though we have bilingual labelling here in Canada, we still learn new vocabulary each time we go shopping for groceries. After all, we seldom see things like quince jam (confiture de coings) or sea bream (la daurade) at home.

On our last visit, we made the usual trip to the nearest Monoprix to stock up on basics, from breakfast granola (the nearest thing we could find was organic muesli) to Kleenex (mouchoirs en papiers). As we were unpacking, I saw something unusual on the Kleenex box, shown below.

“Pour prestidigitateur debutant.” (For beginner magician.) What was that all about? After thinking about it for a while, I assumed that it was a little joke on the fact that pulling out a Kleenex is a bit like pulling a rabbit out of a hat. Ta-da!

The box was one of Monoprix’s house brand products, and on my next visit, I looked for other products, to see if they, too, had quirky little observations on the packaging. They did. 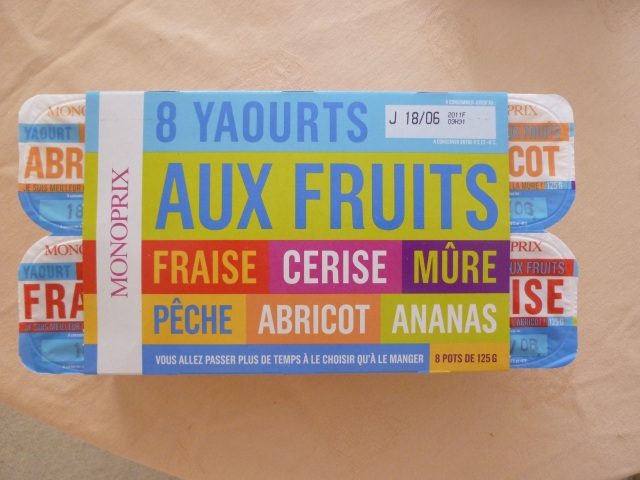 The carton with eight different yogurt flavours in it said, “Vous allez passer plus de temps à le choisir qu’à le manger.” (You’ll spend more time choosing one than eating it.) That was pretty straightforward. But some of the taglines had a Zen-like weirdness.

On a can of flageolet beans: “Il ne faut pas écouter tout ce qu’on dit.” (You shouldn’t listen to everything people say.) Hm. Does it have anything to do with the fact that a flageolet is a type of musical instrument? No idea.

The Brussels sprouts were easier. “Ne comptez pas sur nous pour faire un blague belge.” (Don’t expect us to make a Belgian joke.) The French are always making jokes about the Belgians, the way Canadians make jokes about Newfoundlanders. The only mystery to me was: who the heck eats canned Brussels sprouts?

Some of the lines were a bit lame. On a can of sweet corn: “Si les poules avaient des dents, elles adoreraient!” (If chickens had teeth, they would love this.) Maybe I am missing something.

But I liked the one on the baby carrots: “Le jeunisme atteint même les carottes.” (The obsession with youth has now even reached carrots.)

I got the pun about the sausages with lentils: “Vous imaginez une sauce avec des lunettes?” (You were thinking of a sauce with eyeglasses?) “Lentilles” is the word for contact lenses.

I was stumped by the one on the sundried tomatoes, however: “Elles vont vous sécher.” (They will dry you? Ah, no. “Sécher” can mean to leave one without an answer, in other words, to stump someone. No kidding.)

I also learned a new expression in the mustard aisle: “Prenez-en de la graine.” Apparently “prendre de la graine” means to take inspiration from something. Sure, I can be inspired by mustard. 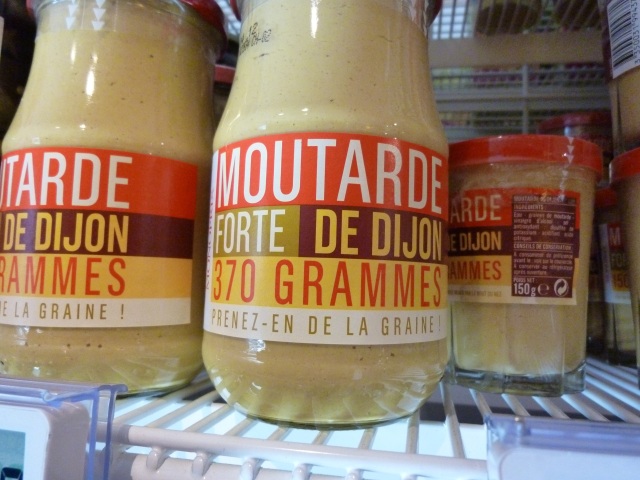 There are even cultural references. One type of butter is marked, “Goûté et approuvé par le Petit Chaperon Rouge.” (Tasted and approved by Little Red Riding Hood.) Apparently in the French story, LRRH is carrying butter to her granny, among other things in the basket.

Who comes up with these things? And how many approvals do they have to seek before the powers that be sign off on a sauce for crudités (raw vegetables): “Pour que crudités ne rime pas avec nudité” (so that crudités don’t rhyme with nudity)?

Was the creative team falling on the floor at their own puns and rhymes, or going about it seriously? “OK, folks, we need to come up with new taglines for detergent, rye bread, and apricot juice by noon. Sharpen your pencils.” 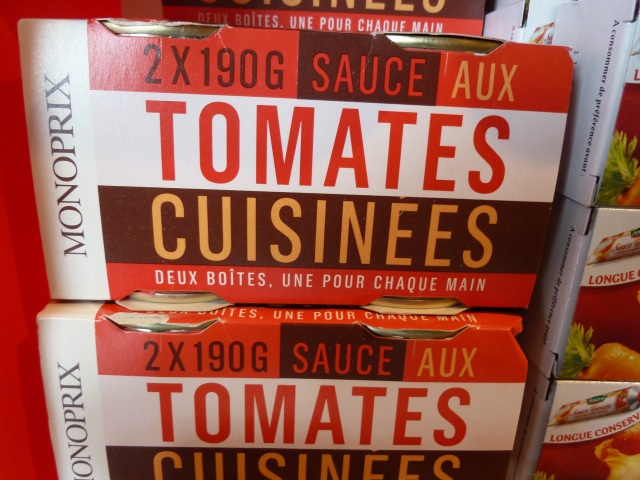 I must say that I like the design of the packages, with their bright blocks of colour and bold lettering. There are no images, just typography, which presents a challenge for foreigners, but they are easy to spot on the shelf, and can be read from some distance away or by people with poor eyesight. (I’ve always said that France treats older people better than Anglophone cultures do.)

According to the Monoprix website, this new visual identity program (what the French quaintly call in fake Franglais, “le relooking”), was rolled out in late 2010. No fewer than 2,000 products received the treatment. Collect the whole set.

On another website devoted to advertising I learned that the program was created by a firm called Havas City and was intended to cheer people up after a rather gloomy period of recession. The overall theme was “Non au quotidien quotidien.” The agency translates that as, “Daily life should never be routine.” On the whole, the campaign succeeded and sales improved.

Apparently, however, one catchphrase backfired (I guess with 2,000 products, there are bound to be some missteps). The creative team chose this line for a package of verveine (verbena) herbal tea: “L’infusion qui vous fait oublier qu’on ne vous a pas augmenté cette année.” (The herbal tea that will make you forget you haven’t had a raise this year.) When Monoprix employees spotted this, they had a collective fit, since they hadn’t had a raise that year. Damage control. The packages now say: “On ne change pas une équipe qui gagne.” (You don’t change a winning team.) What is the French for “feel-good catchphrase”?

The tagline for the company as a whole is “On fait quoi pour vous aujourd’hui?” (What can we do for you today?) I guess for us Anglophones, you can make shopping just that more productive as we polish our French skills while standing in line at the checkout counter. 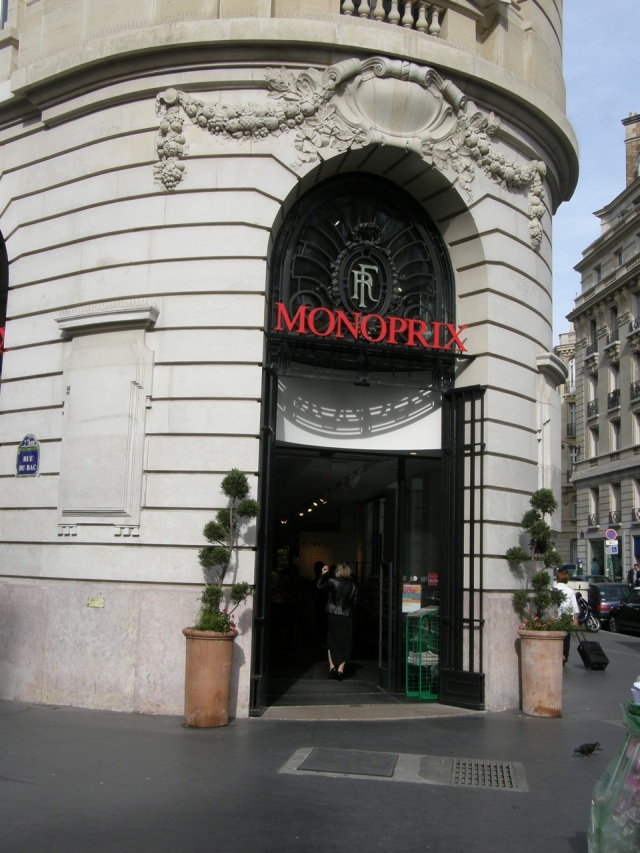 Parisian Fields is the blog of two Toronto writers who love Paris. When we can't be there, we can write about it. We're interested in everything from its history and architecture to its graffiti and street furniture. We welcome comments, suggestions, corrections, and musings from all readers.
View all posts by Parisian Fields →
This entry was posted in Paris food, Paris shops and tagged Graphic design, Havas City, Le relooking, Marketing, Monoprix, Packaging, Visual identity. Bookmark the permalink.

13 Responses to Learning French at Monoprix