As the saying goes, “Behind every great man stands a woman, rolling her eyes.” In the case of the Modernist architect Le Corbusier, that woman was probably Charlotte Perriand, his colleague and co-creator in the 1930s. Only she was probably too good-natured and well-mannered to roll her eyes. Perhaps from time to time she permitted herself a rueful smile.

On our last visit to Paris, we saw an exhibit of her furniture and photographs at le Petit Palais. It continues until September 18 and we highly recommend it.

Charlotte, who was born in 1903 in Paris, studied at the l’Ecole de l’Union centrale des Arts décoratifs, and got a job after Le Corbusier saw her chrome-tube furniture, shown at the Salon d’automne in 1927. The installation was called Bar sous le toit (bar under the roof). 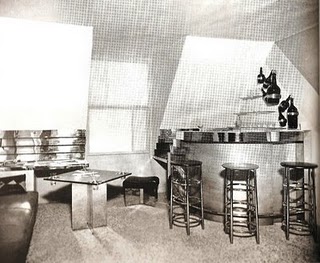 Actually, she had earlier applied to Le Corbusier for a job, thinking he might have a use for her training in the decorative arts, and he had turned her down with the dismissive comment, “Nous n’avons pas de broder coussins ici.” (We don’t embroider cushions here). It was the exhibit that made him change his mind. She was apparently gracious enough to overlook his earlier boorishness.

But what is more interesting is that the ensemble was not a prototype or a commission for someone else – it was something she had created for her own studio in the place St-Sulpice. Immediately you get a sense of who she was. She didn’t say one thing and do another.

Le Corbusier was famous for saying, “A house is a machine for living in,” and for creating clean white cubes in which everything was carefully positioned at right angles and all clutter was banished. But a photograph of Le Corbu taken by Brassaï in 1931, shows him toiling at a untidy desk, with an unsteady pile-up of books and papers on the shelves behind him, and bits of bric-a-brac on the mantel shelf. The only right angles are in a picture on the wall. Machine for living in, my eye. 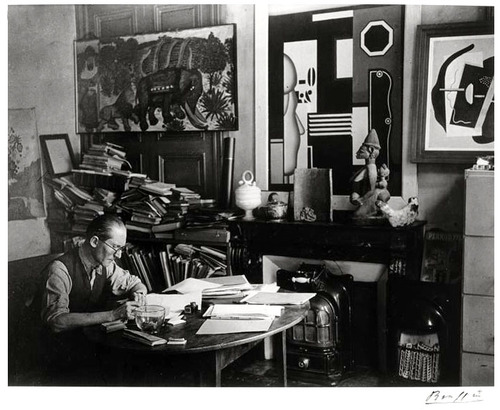 Charlotte understood that people have stuff. One of her comments, quoted in the exhibit, caught our attention:

What is the crucial element in domestic equipment? We can answer that immediately: storage. Without well-planned storage, it is impossible to find space in one’s home.

Truer words were never spoken. Norman is building shelves in our basement as I write this. If we could, we would buy or recreate the furniture Charlotte created – elegant, multifunctional shelves and cupboards that make modern wall units look clumsy and amateurish by comparison.

Charlotte worked in Le Corbusier’s studio for about 10 years. The rest of her career was full and busy. She travelled widely, lived and worked in Japan at various times, married twice and had one child, and collaborated with other artists, architects, and designers, including Fernand Léger and Jean Prouvé.

The exhibit shows how she drew inspiration from the world around her. In a videotaped interview on the Petit Palais website, Jacques Barsac, her biographer (and, we gather, son-in-law), said that she used photography as a way of taking notes of things that interested her. The exhibit does a wonderful job of pairing photographs and objects – the slatted bench beside the picture of a fish skeleton, the roundabout beside the similarly shaped mountain refuge she designed.

She spent a lot of time outdoors – hiking, swimming, skiing. The keynote image in the exhibit is of her with her back to the camera, facing a range of mountains, raising her ski gloves in the air, wearing nothing above her waist but a string of beads (probably her signature necklace of steel ball bearings). She looks strong, healthy, and down-to-earth. 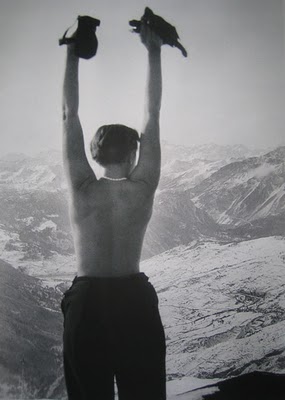 Her awareness of the world around her extended to the lot of the less fortunate. In one of the other galleries of the Petit Palais, we were impressed by a huge mural/collage on the theme of “La Grand Misère de Paris.” She had created it for a salon devoted to “arts ménagères” (domestic arts) in 1936. Not what you’d expect in such a venue, but Charlotte was aware of the dire living conditions of the poor in the city and the need for healthy housing. Modernists get a bad rap for wanting to sweep away “picturesque” slums and replace them with clean new housing, but you cannot fault their good intentions.

It’s a wonderful exhibition, but a couple of things surprised us. We saw the official document that Charlotte, with Le Corbusier and his cousin/partner Pierre Jeanneret, had received, patenting the design for a reclining chair (chaise longue basculante). Her name comes first. First. Yet in the display – in an exhibit devoted to her work – the design credits are generally listed as “Le Corbusier, Jeanneret and Perriand.” And the piece of furniture in question was for years known as a Le Corbusier design, as if she’d never existed. In most furniture shops, it is still described that way.

We were also surprised by the dearth of books about her in the gift shop. There was no catalogue, nor one of those magazine-like overviews that the French do so well. Only a fold-out brochure, one third of which was taken up with the keynote image of her, and some cards (not postcards). She deserves better.*

We could not take photographs of her work inside the museum. But in Le Bon Marché department store, there was a display devoted to her, presented by the furniture manufacturer Cassina, a company that has reissued editions of her classic designs. Her work is also in the Musée des Arts Décoratifs. But again, in most cases, the designers’ names are listed with hers last. We both got quite irked by this downplaying of her role in the design. 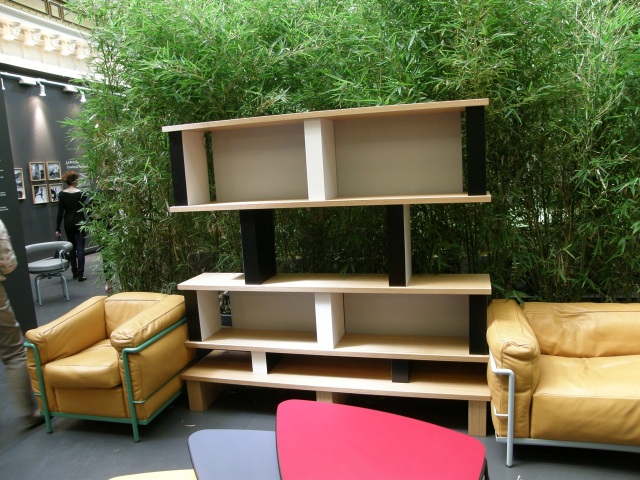 Even the wording of the chronology of her life written on a panel at the Bon Marché exhibit seemed to efface her. The last line reads, “1999 – disparition de Charlotte Perriand à Paris.” Yes, in French you can interpret the word “disparition” to mean death as well as disappearance, but did they choose that word because her work had “disappeared” into that of others?

Charlotte, we owe you an apology. For years you were the invisible woman behind the furniture designs attributed to Le Corbu and his brother, and only belatedly – and seemingly half-heartedly – are people acknowledging your creativity and contribution. It’s time we gave you the credit that is your due. 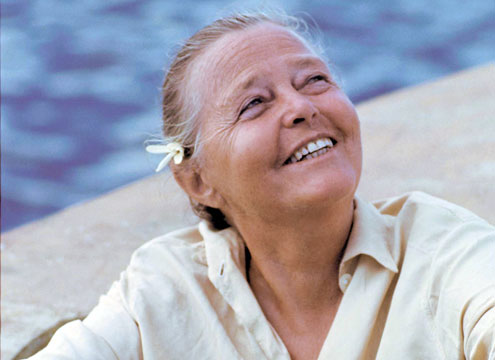 *Books about her do exist, including an autobiography. A list appears on her Wikipedia entry.

Parisian Fields is the blog of two Toronto writers who love Paris. When we can't be there, we can write about it. We're interested in everything from its history and architecture to its graffiti and street furniture. We welcome comments, suggestions, corrections, and musings from all readers.
View all posts by Parisian Fields →
This entry was posted in Paris art, Paris museums and tagged Brassaï, Cassina, Charlotte Perriand, Ecole de l’Union centrale des Arts décoratifs, Jacques Barsac, La Grand Misère de Paris, Le Bon Marché, Le Corbusier, Pernette Perriand Barsac, Petit Palais, Pierre Jeanneret. Bookmark the permalink.

6 Responses to The invisible woman