Nostalgic images of a vanishing city

Photographs of Paris in the snow were big news earlier this month. We are Canadians. As Gilles Vigneault sang of this country, “Mon pays ce n’est pas un pays, c’est l’hiver” (My country is not a country, it is winter). So our reaction was mainly a lifted eyebrow. We remember a snowy December when buses stopped running because of what Parisians considered treacherous conditions. We’ve dined out in Toronto on that story.

That year, the snow was at most half an inch deep. But in an odd little book, we found an image of a Paris omnibus attempting to make its way through much higher drifts. Now that’s what we call snow.

The book is called Curiosités de Paris by Henri Boutet (1851–1919). We found a battered copy at a flea market a few years ago. It consists of a series of one-page commentaries, mostly on nostalgic themes, with illustrations by the author, some original, some based on the works of other artists. Boutet was an artist known for his engravings and etchings of Paris life, particularly the women of Paris. There is no date on the book, but a mention of automobiles and aeroplanes suggests the early 20th century.

The image above is marked “d’après Férat.” That is, the Russian-born Serge Férat (1881–1958). I found a more detailed and larger version on the cover of Le Monde illustré of 13 December 1879. 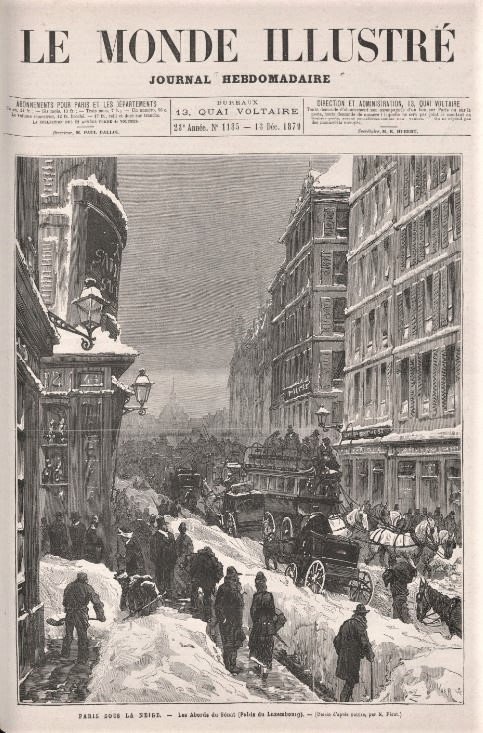 The newspaper explains that Férat made the sketch from life the day after a heavy snowfall in 1879, as residents tried to get on with a normal day under abnormal circumstances. It also identifies the location: near the Senate (the Palais du Luxembourg), likely the rue de Tournon.

Boutet seems fond of omnibuses, as they feature in other illustrations. This one, a Boutet original, shows an omnibus in a downpour with a jumble of umbrellas on the upper level. 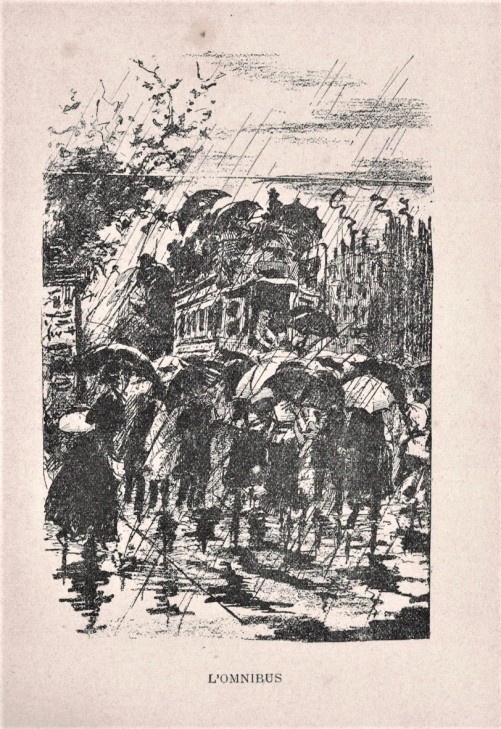 « Le Boulevard, d’après Ed. [Edmond] Morin » shows an omnibus on a brighter day. A glimpse of the Café Tortoni in the background places the scene in the Boulevard des Italiens. The original was also from Le Monde illustré.

Other illustrations in the book depict quaint customs. We had never heard of the “La Neuvaine de Saint-Etienne-du-Mont” (the Novena of St-Etienne-du-Mont), which takes place in the first half of January at the church near the Pantheon. Boutet calls it “bien peu parisien” and likens it to a church festival in Brittany. Little booths selling religious trinkets would be set up near St-Etienne and the street in front would be thronged with nuns. Novenas consist of a set of special prayers or services on nine consecutive days.* This one is directed to Paris’s patroness, Sainte Geneviève, and according to St-Etienne’s website, these services still take place every January, from the 3rd to the 11th, although there was no mention of booths selling religious paraphernalia.

Sure enough, the larger original was in Le Monde illustré, in 1859. 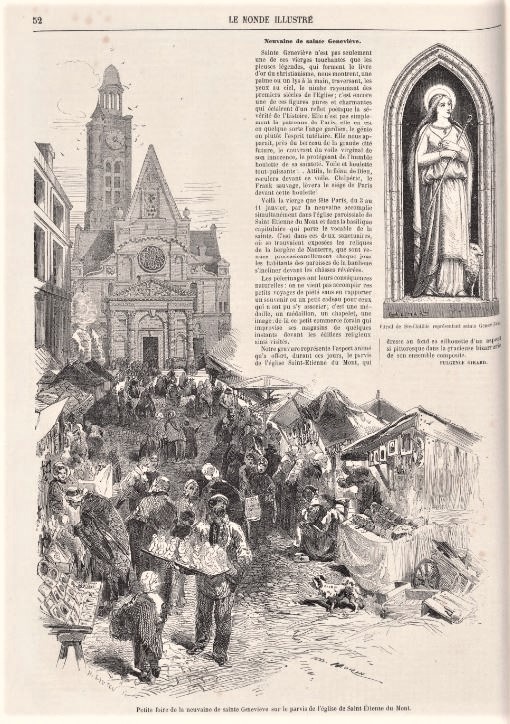 Another little essay and illustration is devoted to the now-vanished métier of commissionaire. This was a person who was paid to carry out small commissions, such as delivering a message or a parcel. Boutet noted that the commissionnaires had already been replaced by “petit bleus” (telegrams sent through the pneumatic system) and the telephone. One hundred years later, that would change to text messaging. 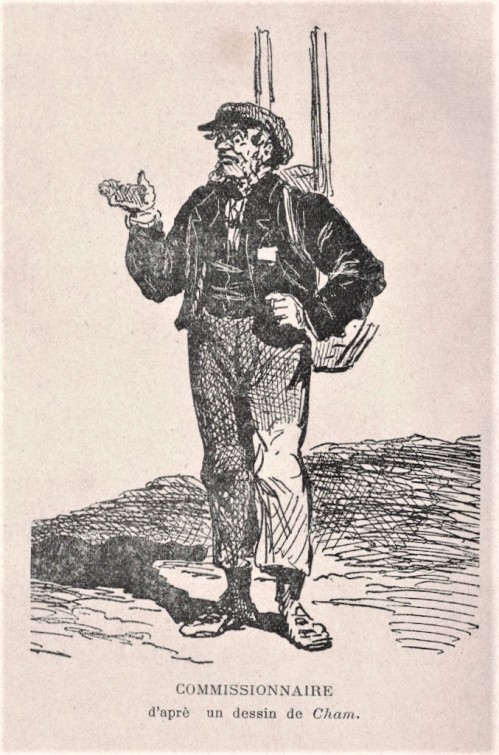 A few images summon up historic events, such as “Une bombe au d’Harcourt.” The illustration accompanies an essay describing the “old” Quartier Latin that focuses on how things have changed, with merely a brief mention that one of “les obus prussiens” hit the Grand Café d’Harcourt “pendant la guerre” (when Boutet was writing, that meant the Franco-Prussian War).

The café was at 47 boulevard St-Michel, at the corner of the Place de la Sorbonne, and the bomb fell in January 1871. The image, supposedly based on one by “Lix,” is amusing, as the patrons (presumably students) seem only mildly surprised by the explosion, and all but one of the wine glasses are still upright and intact. Once again, I was able to find the original in Le Monde illustré from 1871.** 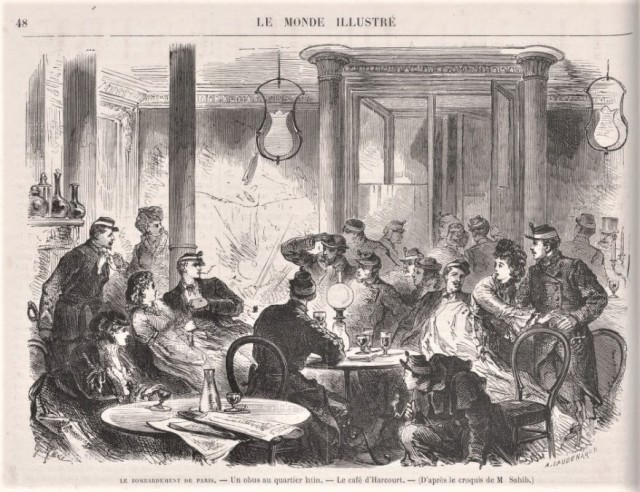 What strikes me is the way in which artists freely used each other’s works, and also the way in which, in the days before the widespread use of photography in newspapers, armies of artists were employed to depict events in illustrated journals. And not just quick sketches, but large and detailed images, week in, week out.

With these images, Boutet was doing something similar to Eugene Atget with his photographs. Both wanted to capture a world that was disappearing or, in some cases, had already disappeared. One image in Boutet is of the demolition of some old buildings. 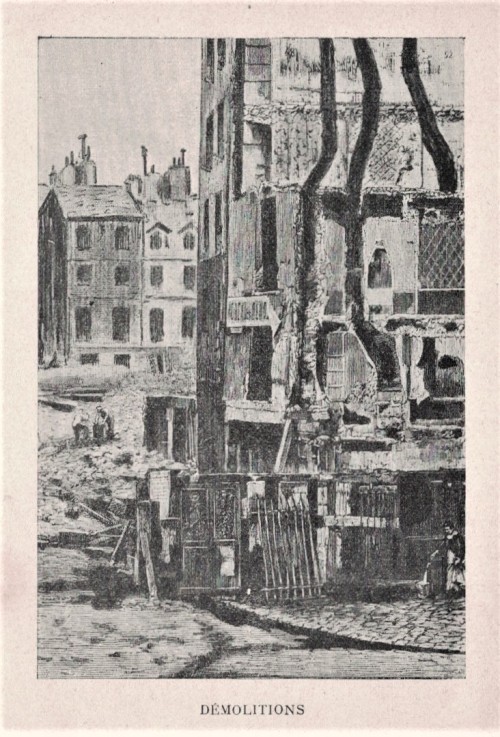 The accompanying essay on Demolitions ends this way:

In the distance, a pole, near a heap of gravel, holds up a small oil lamp that seems, as the evening draws in, like a nightlight at the bedside of houses that will soon die.

It’s a haunting analogy. Paris is always a city of farewells. Many of the things we have written about in this blog since 2010 have already vanished. There is always something new to take the place of what has gone. But knowing a city means knowing something about its layers, and Boutet describes and depicts a few layers that we had not known about.

Text by Philippa Campsie, illustrations from Boutet’s book and from Gallica.

* Novenas to St. Jude, the patron saint of lost causes, have long been popular and back in the days when newspapers had classified advertisements, one would sometimes see a special prayer published nine days in a row to bring about some particular request.

** The artist’s name is not actually “Lix.” The newspaper credits A. Daudenarde (probably Louis Joseph Amédée Daudenarde), who based it on an original sketch by M. Sahib, and Sahib turns out to be a pseudonym for one Louis Ernest Lesage… Boutet was apparently a little casual in his credits.

Parisian Fields is the blog of two Toronto writers who love Paris. When we can't be there, we can write about it. We're interested in everything from its history and architecture to its graffiti and street furniture. We welcome comments, suggestions, corrections, and musings from all readers.
View all posts by Parisian Fields →
This entry was posted in Paris art, Paris nostalgia, Paris popular culture, Paris streets and tagged commissionnaire, Curiosités de Paris, Edmond Morin, Franco-Prussian War, Grand Café d’Harcourt, Henri Boutet, Le Monde illustré, Neuvaine de Saint-Etienne-du-Mont, Neuvaine de Sainte Geneviève, omnibus, Serge Férat. Bookmark the permalink.

12 Responses to Nostalgic images of a vanishing city