Postcards from a Snowy Paris

Although it snows occasionally in Paris, it seems to be rare enough that only a small amount wreaks havoc. The city just isn’t prepared for snow. Parisian winters are normally mild, but there have been some very cold ones that have brought great hardship. Fortunately, Parisians are a resilient lot. Disaster after disaster, they survey the scene and get on with fixing the damage and carrying on with life.

The image above seems timeless, with the workers in their hooded coats, wielding twig brooms and flat shovels. They are clearing what appears to be a light snowfall. (We cannot identify the location. Can any reader out there suggest where it might have been taken?)

That timeless scene seems a far cry from the “vigorous” winter of 1879-1880, when heavy snows and frigid temperatures led one newspaper, Le Petit Parisien, to put Paris and Greenland in the same category. It was an exceedingly difficult time, when trains moved no faster than pedestrians (if at all), telegraph services went down, and many apartment dwellers found themselves without the all-important gas needed for heating and light.

The roof of the Saint-Martin market collapsed under the heavy snow load. Fortunately, the market was closed and no one was killed. The temperature dropped as low as minus 21°C. For those who like numbers, 12,000 workers were hired to clear seven million cubic metres of snow. Even after converting that to seventy million cubic feet of snow, I’m still not sure what it means. An awful lot of snow, I guess.

But in the postcard, an aura of calm dominates the scene. The snow on the rooftops is more scenic than threatening, and the two figures just visible on the left edge seem unhurried. From the stamp cancellation on the front of the card, we know it was mailed from Paris in 1909.

The destination is shown on the back, as well as in the second postal mark. It is the town of Mennecy south of Paris in the département (administrative region) of Seine-et-Oise.

The next three cards, taken one year later, are from one of the great natural catastrophes in Parisian and French history: the Great Flood of January 1910, the likes of which Paris had not seen since 1658. 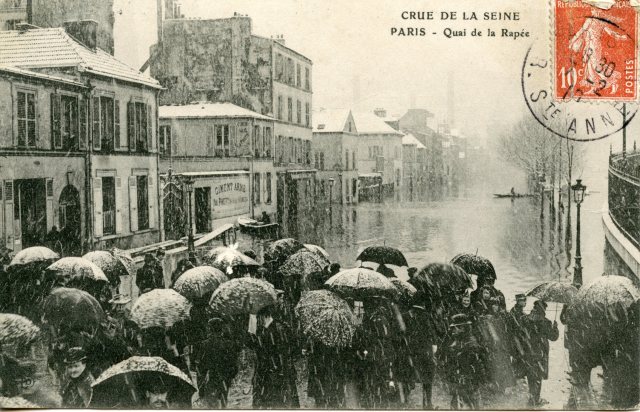 Snow-covered umbrellas dominate the foreground. It is quite unlike the first postcard, where there is only one umbrella and no sense of urgency. In this image, snow-covered roofs seem threatening, as do both the water in the street ahead and the boat floating where normally one would walk.

No single event triggered the flood. A series of unusual weather patterns accumulated and built on each other. The summer of 1909 had been cold and rainy. Sodden land held as much water as it could and the rest ran off. Fall and winter came with more rain and snow. As the New Year approached, it rained even harder and temperatures rose. Under the double load of meltwater and heavy rain, the Seine began to rise, causing small floods here and there. That was serious, but not a crisis. Then, on January 9, 1910 the rains came down even harder and by the January 14, the river was in full flood. And on some days the rains turned to snow.

This photo, taken on January 23, 1910, is both sad and threatening. By this time Paris had suffered serious damage. Thousands of homes and businesses had been flooded, not to mention the Metro, but Parisians soldiered on. Temporary sidewalks on stilts were erected so people could get to and from work, buy food and wine, and get on with their lives.

And what did those huddling on shore in the cold think of the struggling pleasure boat that advertised “Pianos on Board”? Perhaps they had dined and danced there once. Did it all seem irrelevant, perhaps even mocking? Or did it remind them why Paris, no matter what, was the pleasure capital of the world, a city of joy that sometimes suffered catastrophic interruptions? The waters would go down eventually, and the fun would resume on the boat and elsewhere.

The great flood of 1910 was not confined to Paris. The Seine is a long river and many outlying areas were flooded. At first glance, this image from Nanterre seems calm and the snow on the roof pleasantly scenic. On closer examination, you can see the height of the water. Nanterre is downstream from Paris, but close enough to be regarded as a suburb. This card, and the one below are from a series showing the damage done to Nanterre during the flood.

This second image shows an artificial gas facility where the coal in the right foreground would undergo what we call destructive distillation (heating to high temperature in the absence of air) in ovens or retorts inside the building on the right. The heat drove off gases which could be collected and stored in the gasometer on the left and distributed from there by gas lines. This was the artificial gas that powered, heated, and lit so many buildings and businesses in the 19th century. I wonder if the plant shown here had to shut down as a result of flood damage.

But cold temperatures and snow can also bring pleasure. The final postcard shows an idyllic winter scene in the Bois de Boulogne, one of the great Parisian parks. There is a lot going on. Some people are standing around talking, and some skating. When I first looked at the card I was puzzled by all the brooms. Are these the twig brooms we see in so many paintings and photos of Paris? Today the shape is fundamentally unchanged, but the bristles are no longer twigs but fluorescent green plastic.

After I had scanned the postcard and looked at it on a large screen, I could see that they were clearing individual skating areas. On the right I could see someone using a flat shovel similar to that in the first postcard. Near the middle is a wonderful apparatus—a chair of some sort mounted on runners and being pushed by a skater.

Yes, winter can be wonderful. The image of people enjoying the a cold bright day brought back memories of Christmas Day, 2010, when Philippa and I wandered through a snowy Jardin du Luxembourg. I shall always remember the young men playing table tennis in the snow. Come snow, come rain, Parisians always seem to find a way to have fun.

Parisian Fields is the blog of two Toronto writers who love Paris. When we can't be there, we can write about it. We're interested in everything from its history and architecture to its graffiti and street furniture. We welcome comments, suggestions, corrections, and musings from all readers.
View all posts by Parisian Fields →
This entry was posted in Paris history, Paris parks, Paris postcards and tagged 1910 flood, Bois de Boulogne, gasometer, ice skating in Paris, January 1910, Jardin du Luxembourg, Marche St-Martin, Nanterre, Paris flood, Paris postcards, Snow in Paris, snow load, St-Martin market, twig brooms, vintage postcards, winter in Paris. Bookmark the permalink.

7 Responses to Postcards from a Snowy Paris