Posted on December 3, 2017 by Parisian Fields 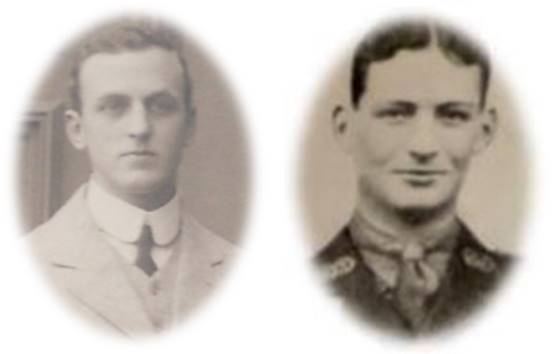 During my research into their lives and deaths, I made contact with Jack’s school, Perth Academy in Scotland, which honours former students and staff who fell in the First World War on the 100th anniversary of each death. This project is known as “Flowers of the Forest,” the name of the traditional Scottish bagpipe lament played at funerals, and was launched by a retired teacher from the school, Dave Dykes.

In 2015 I resolved to be at Perth Academy in October 2017, along with as many members of my family as possible, to pay tribute to my great-uncle Jack Sieber. In the end, there were nine of us there on the day: Norman and I, my sister Alison and niece Alex, my cousin Jane and her son Andrew, and my cousin Ian with his wife Yvonne and her daughter Amanda. Ours is a small and scattered family and nine of us in the same place at the same time is quite an accomplishment.

The event actually took place 100 years and one week after John’s death, because the preceding week the school had been on its annual “tattie-hawking” holiday. As Dave Dykes explained, “Schools in this part of Scotland traditionally have a holiday in October so that the children can help with the potato harvest. In Scots, tattie hawking means lifting or harvesting the potatoes or tatties.”

The day began for us at St. Ninian’s Cathedral, the Episcopalian church my great-uncle’s family attended, which also has a war memorial on which he is mentioned. 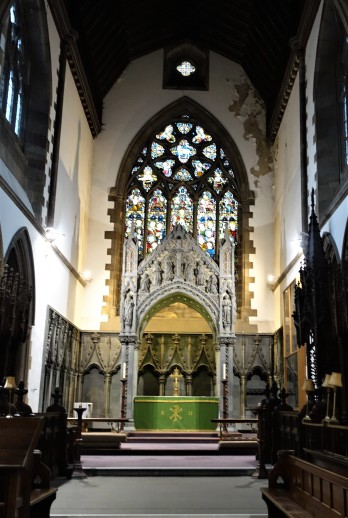 When my niece asked about the difference between the layout of an Episcopalian church and that of a typical Church of Scotland building, the cathedral guide promptly walked us down the road and asked someone at a nearby Scots kirk to open up and allow us in. As we walked into the church, the man pointed to several plaques with the names of war dead on them – plaques from churches that were now closed, which had been brought to this surviving church. I wonder how many war memorials are lost when churches close.

We then visited the Black Watch Museum in Balhousie Castle. We were there because my grandfather, Alexander Campsie, who survived the Great War, served in the Black Watch. (After the war, he became a military chaplain with the Royal Navy.)

The Black Watch also commemorate their fallen in the First World War and my sister and I found ourselves placing crosses for two of the three men who were honoured that day. What you see is a fence into which individual crosses have been placed. This is just the Black Watch, just three years into a four-year war.

The cross I placed had the name Thomas Birch. I later looked him up. He came from a desperately poor family in Perth, spent time in reform school, and died from a gunshot wound in the Perth Hospital at the age of 19. It’s possible that he died as the result of a training accident. Not an illustrious career, but he signed up and he served, like all those commemorated.

The tour of the museum was led by a knowledgeable young man who focused his talk on events and objects that would be meaningful to those who might otherwise be unmoved by military history. As we came out of the museum, the sky cleared and the sun came out, and the rest of our week in Scotland seemed to be bathed in sunshine – not a common experience in autumn. 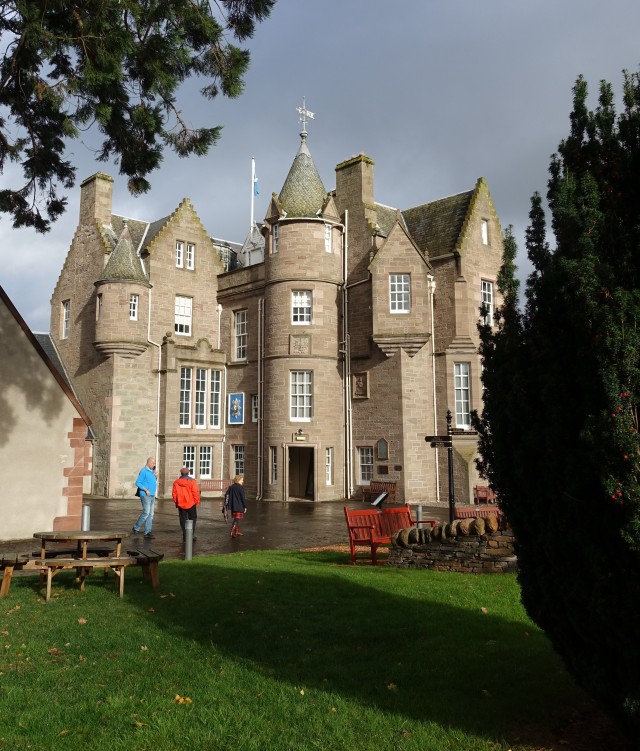 We had lunch together as a family and went to the school in the late afternoon. Perth Academy is a modern building on the outskirts of the city, not the building that my great-uncle would have known. And not just my great-uncle – both my grandparents on my father’s side attended the school, and a great-aunt taught there. Only recently have I realized what an important role the school played in the life of my father’s family.

The old school was on the edge of the downtown area, part of an elegant terrace facing a park called the North Inch.

The school’s war memorial was mounted on the façade (you can see the place it occupied between the ground-floor windows), but when the school moved, the memorial went with it, and is now in the assembly hall of the new building, where the ceremony took place. 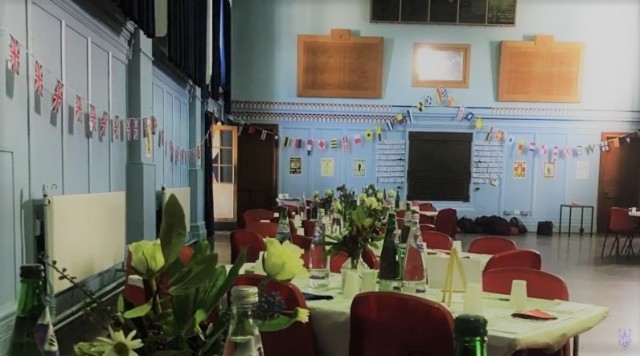 The students read out a short biography of Jack Sieber and the history teacher who oversees the Flowers of the Forest project, Laura Hobson, read the letter sent by Jack’s commanding officer to his wife. My cousin Jane had brought “the King’s Penny” – the inscribed copper disk sent to the relatives of the fallen – to be part of the small display set up on a table in front of the war memorial. 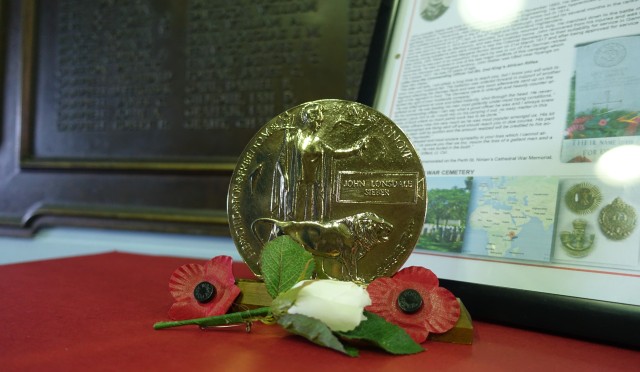 Jane and I later talked about how we remembered seeing it for years at our grandmother’s house and not really taking in what it was or what it meant. Our grandmother always kept it brightly polished. She grieved for her only brother for a very long time.

After the short commemoration ceremony, there was an evening of food and entertainment called “Stovies, Songs,  and Stories.” Stovies are a traditional form of stew made with meat, potatoes, and vegetables, often served with oatcakes. Apparently there are as many recipes as there are Scottish cooks. These ones were good. There was Scottish shortbread to follow. 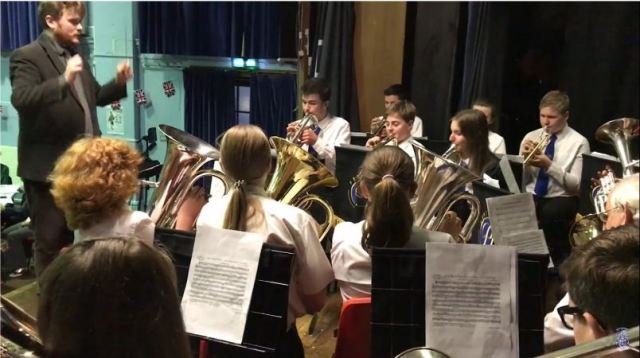 The band played, there was a piper, we all sang, the head girl and head boy read poems and letters, and there were presentations showing all the men and one woman from the school who gave their lives, as well as photographs from the students’ annual visits to the war cemeteries in France. I presented the library with copies of two Canadian books about the war (Vimy by Tim Cook and The Wars, a novel by Timothy Findley) as a thank-you for the welcome we had received.

Later, I found myself talking to some teachers, and one asked me if I visit Scotland often. I explained that as a child, we came to Scotland nearly every year to visit my grandmother in a village called Gifford (shown below). 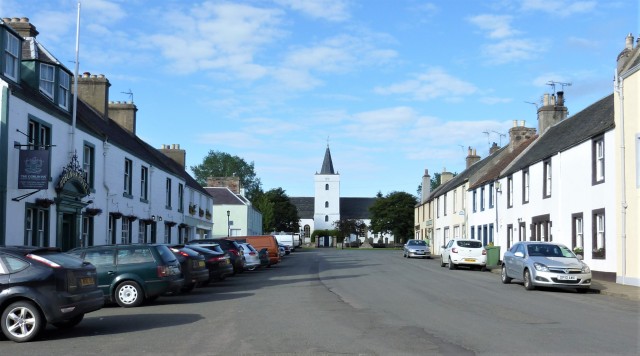 It’s a pretty place, but rather quiet. I remember playing croquet in the minister’s garden, borrowing Miss Whitsun’s ancient clanky bicycle, or walking in the surrounding countryside, with occasional visits to Haddington, a small town with an enticing sweet shop. My cousins lived in Motherwell, an industrial town near Glasgow that seemed wildly exciting by comparison (there was a cinema). My grandmother died just before I graduated from university, my cousins scattered to different places, and somehow I never saw much reason to go back to Scotland. But I do now, and I will.

I chose the title “The Auld Alliance” for this blog because it is the name for a 13th-century agreement between the Scots and the French (against the English, of course), and the name of a pub in Paris on the rue François Miron in the Marais, the only link to Paris I could think of. Perhaps we will venture in on our next visit. 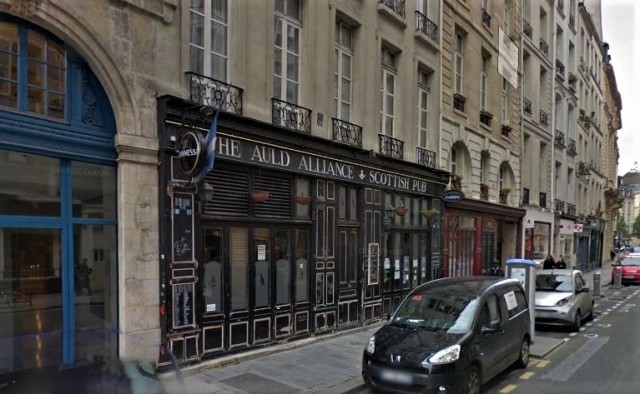 Parisian Fields is the blog of two Toronto writers who love Paris. When we can't be there, we can write about it. We're interested in everything from its history and architecture to its graffiti and street furniture. We welcome comments, suggestions, corrections, and musings from all readers.
View all posts by Parisian Fields →
This entry was posted in Family history, World War I and tagged Balhousie Castle, Black Watch, Flowers of the Forest, Gifford, John Lonsdale Sieber, Perth Academy, Raymond Hummel. Bookmark the permalink.

13 Responses to The Auld Alliance