A pebble for Clare

The news comes in, day by day. Cancelled. Closed. Postponed. One by one, I delete events from my calendar. Well, I think, look at all the time I have to write the next blog. Funny how when you have all the time in the world, it becomes harder to focus.

My original plans for this month’s blog seemed out of step with the current situation, so, like many other writers, I started thinking about other times of emergency. Cholera. Spanish flu. War. And then I thought of Clare Gass.

I learned about her indirectly. As I wrote in an earlier blog, I have long been following a project called Flowers of the Forest, organized by Perth Academy in Scotland to honour the more than 160 men and one woman from the school who served and died in the First World War. My great-uncle John Lonsdale Sieber was among them.

Although the formal commemoration of the First World War ended in 2019, the project continues in a modified form, and the students continue to visit the battlefields and cemeteries in France and Belgium every spring (I don’t know if they will be able to go this year).

This year, Dave Dykes, who helps organize these events, had identified certain cemeteries in which former Perth Academy students were buried and came up with the idea of taking pebbles from their homes in Perth and placing them on the graves. Of the 14 men whose graves the students were to visit, the houses of 13 are still standing.

At the same time, he received an interesting letter. Over the years, Dave has built up an impressive network of people like me, relatives of those who died, who have contributed stories and mementos related to the fallen, and who support the Flowers of the Forest project in various ways. Recently, one sent Dave a copy of a letter written to her family about James Amess, a private in the Liverpool Regiment who died in a Canadian casualty clearing station near Esquelbecq in May 1918, aged 30. It was written by the nurse who had tended to him, Clare Gass.

As it turns out, Clare not only wrote letters to the families of the men she nursed, she kept a diary. And in 2000, her war diary was published by McGill-Queen’s University Press. It is a remarkable document.

She came from Shubenacadie, Nova Scotia, where she was born in 1887. Susan Mann’s introduction to her diary notes that she was “the oldest living child and only girl in a family of ten, three of whom did not survive infancy.” Her father owned a lumber mill and general store. She attended Edgehill School in Windsor, Nova Scotia, as a boarder.

This point interested me particularly. In the early 1970s, my godfather, John Derrick, was principal of Edgehill for a few years, as well as principal of the neighbouring boys’ school, King’s College. Eventually the two amalgamated, and they continue as King’s–Edgehill to this day. When I attended the University of King’s College in Halifax, I knew quite a few Edgehill alumnae. Immediately I could picture Clare at the big school building on the hill in Windsor.

Susan Mann suggests that Edgehill prepared Clare for a military nursing career in some ways: “Through the pattern of the school day, with its ‘rising bell’ at 7 a.m. to ‘lights out’ at 9:15 p.m., the girls were acquiring orderly, accepted discipline. Ten years later réveillé and last post would not be much different.” At Edgehill, she also met women who had chosen teaching careers instead of marriage and children.

As a teenager, Clare nursed her mother when she became ill after the birth of her youngest child, and this experience may have influenced her choice to train as a professional nurse in Montreal in 1909. This meant three more years of residence and discipline along with fellow women students.

Like my husband’s grandmother Elsie Pirie, another bespectacled nurse who did her training a few years earlier, Clare often used postcards to communicate with her family; some are now in the archives at Dalhousie University. Here is one sent from Montreal in 1909, announcing the start of her studies at the Montreal General Hospital.

After graduating in 1912, Clare did private-duty nursing in Montreal, before enlisting as a military nurse in 1915. Her attestation papers note that she had red hair and blue eyes. She received extra training and was sent overseas in May, arriving in France on May 18. Here are her very first impressions of France:

Went on board a small steamer at Folkestone…It was both foggy and rainy… I stayed on deck, we went at full speed. Near the entrance to Boulogne we passed two hospital ships leaving the port. We were conveyed by the Ambulance Waggons to our hotel, the Hotel Louvre. Such a funny place. Blue lights in the sitting room which are ghastly. A wide tiled hall. Close smelling rooms. Curtains of beautiful French embroidery palms & plants in abundance.

The diary continues with accounts of her work, but also of long walks or bicycle rides with other nurses when she had time off (where did she get the energy after a busy shift?), letters from family (three of her brothers were also serving), and quick impressions of the war.

I shall never forget the sound of the Motor Ambulances as they bring in the Convoys. The continual burr as they pass our huts, as one follow the other from the siding up to the highway, some slower than others according to the severity of the wounds of the patients they carry. (July 6, 1915)

Last night in the night a terrific explosion wakened us – an ammunition vessel we discovered later in the day has been blown up at the mouth of the harbour. (March 9, 1916)

A convoy of 55 came into D last night. All Australians from Beaupaume where the Germans are retiring. Such bad bad wounds. My heart aches for these poor lads so far from their home. Five shot through the chest, one arm blown off. One spine case paralyzed. One fractured pelvis. One pair of trench feet so bad that both feet will have to come off. (March 1, 1917)

In May 1918, when James Amess was in her care, she was at the No.2 Canadian Casualty Clearing Station, Remy Siding, on the Belgian border.

She was so busy that for many days that month (including the day of his death), there are no entries in her diary. In April, she noted that three nurses had returned to Canada.

We received heavily today both French & England patients. So many many hundred. Miss Gee & I are alone on the Ward. We are very short of Sisters. Those who have gone have not yet been replaced.

Our old hospital site is knocked to pieces. Ward H, the men’s dining room & the kitchens are no more. The Medical stores are smashed as is also the Estaminet at the Corner.

But she carries on. They all do. Ten days go by with only a single entry: “We have been very very busy for the last two weeks.” Yet in this period she found time to write to Amess’s family, and probably to other families as well. 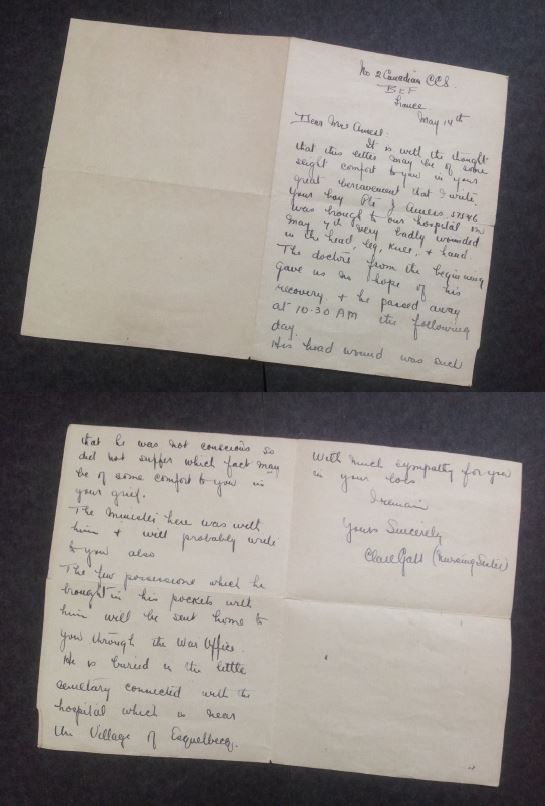 Clare’s own brother Blanchard and her cousin Lawrence, with whom she had had a youthful romance, died in April 1917, within a day of each other. Her brother, Cyril, lost a foot at Ypres, but returned home. Another brother, Gerald, survived.

In September 1918, Clare was sent to England, and she nursed victims of the Spanish flu at a segregation hospital in Wales. It was her choice. “I offered my services in place of another who does not wish to go.” She and one other nurse were assigned to a 30-bed ward. “Such sick sick men. Many of them will die,” she noted, compassionately but realistically, on October 17, 1918.

Clare returned to Canada in December 1918, and served for most of the following year in a military convalescent hospital in Quebec, Ste-Anne-de-Bellevue.

She was demobilized at the end of 1919 and for the next 30 or so years, she worked in social services in Montreal, retiring to Shubenacadie in 1952, where she continued to do volunteer work in the community. She never married. She died in Halifax in 1968, aged 81, and is buried at Preeper Hill Cemetery in Shubenacadie.

The Royal Canadian Legion in Shubenacadie has promised to send a pebble from Clare’s birthplace that the Perth Academy students will place in Esquelbecq, either this year, or next year, if they cannot go until then.

During the days ahead, I will think of Clare, and of the nurses and doctors who are bearing the brunt of the pandemic. May they all come home safely, as she did.

Text by Philippa Campsie. Portrait of Clare Gass from Parks Canada; postcards of Edgehill School and Ste-Anne-de-Bellevue from Pinterest; postcard to Clare’s father from Dalhousie Archives; photograph of CCS No. 2 from the website of the Ontario Archives, colourized.

For information about Clare Gass’s war diary, visit this page from McGill-Queen’s Press.

Parisian Fields is the blog of two Toronto writers who love Paris. When we can't be there, we can write about it. We're interested in everything from its history and architecture to its graffiti and street furniture. We welcome comments, suggestions, corrections, and musings from all readers.
View all posts by Parisian Fields →
This entry was posted in World War I and tagged Clare Gass, Dalhousie University, Dave Dykes, Edgehill School, Elsie Pirie, Esquelbecq, Flowers of the Forest, James Amess, John Derrick, John Lonsdale Sieber, Montreal General Hospital, Perth Academy, Shubenacadie, Ste-Anne-de-Bellevue hospital. Bookmark the permalink.

3 Responses to A pebble for Clare