The invention of the omnibus

Take a good look at this postcard. What do you see? I tend to gravitate to postcards like this because of the rich detail in the buildings – the names of businesses, the façades of the old houses, the advertisements, the spire in the distance (it isn’t a church, it’s the mairie – city hall – of the 10th arrondissement). Most of the buildings are still there, recognizable in a modern view north along the Faubourg St-Martin.

It’s only after a while that I focus on what is in the street, not just on either side. (Norman says he is the exact opposite and looks at the vehicles first.) An omnibus pulled by three horses dominates the view, followed by two men on bicycles, with an assortment of delivery carts pulled up to the curbs on either side. Those vehicles have vanished forever, leaving only images in photos and postcards. But where did they come from?

Omnibuses were a French invention, and have a curious history, less well documented than the history of the buildings in Paris.

The story begins, not in Paris, but in Nantes, where a man called Stanislas Baudry built a steam-powered flour mill outside the city in 1823. Steam technology produces lots of hot water, and Baudry saw an opportunity to make some money on the side by opening a bathhouse. Unfortunately, the bathhouse was a very long walk from central Nantes, and there were few customers. Baudry hit on the idea of offering a shuttle service – a coach that left from the centre of town on a regular schedule. It held 16 passengers, seated eight to a bench on each side. But not all the people in the coach were necessarily going to the baths – some Nantais started to use the coach for short trips along the route.

Baudry was quick to spot another business opportunity opening up, and launched the first urban transit service in 1826. He called his coach an “omnibus,” a Latin word meaning “for all.” He expanded the business to Bordeaux the next year, and then to Lyon. His request to operate in Paris took longer to get approval, as the authorities were cautious about adding large vehicles to the already congested streets, but eventually Baudry and two partners were given permission to operate up to 100 vehicles, each of which could hold a minimum of 12 people and a maximum of 20. The authorities would set the routes.

At first, the single fare was 25 centimes (longer routes required double fares and the notion of a free transfer was not developed until 1834), collected by a conductor who was also there to help people on and off through the back door. There were no fixed stops along the route; passengers simply signalled when they wanted to get on or off. The No. 1 route and the most heavily used went between the Place de la Madeleine and the Place de la Bastille by way of the grands boulevards. 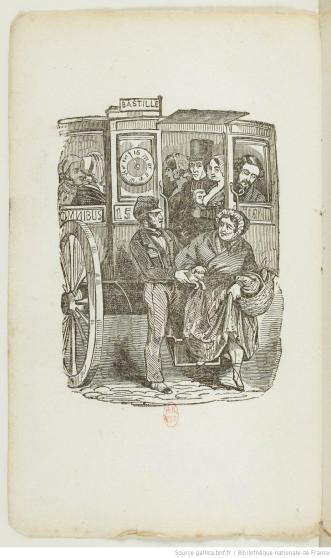 Today transit is so common that it is hard to imagine just what an innovation this was. People who had never taken a coach between towns (that is, most people at the time) needed to get used to the idea of getting into a small, enclosed space with a group of complete strangers, who might be of any social class. In fact, the majority of passengers were middle class, since aristocrats had their own carriages, and the very poor found even 25 (soon raised to 30) centimes too steep. The conductor was also under orders to exclude drunks, dogs, and people with oversized packages, and had some discretion over admitting anyone who simply looked poorly dressed.

Women at first did not use the omnibuses. According to an often-repeated story (possibly an urban legend), the vivacious Duchesse de Berry was the first woman to do so, on a bet, and travelling in disguise. (This may have been a publicity stunt; it seems she had a financial interest in one of the other omnibus companies that sprang up after Baudry’s company led the way.) Eventually, more and more women used the service, although a woman travelling alone was often viewed with suspicion.

The omnibuses proved extremely popular from the start. But Baudry’s firm (Entreprise Générale des Omnibus) lost money in its first two years of operation and nearly failed. Renting facilities for stables and depots was expensive. The price of horse feed went up. The two winters were harsh and people stayed home. Some of the routes the firm was required to service were unprofitable. Competitors lured away customers. And the firm was overextended, having expanded massively in other cities while entering the Paris market.

In despair, Stanislas Baudry committed suicide in February 1830. He shot himself near the company stables on the Quai de Jemmapes, by the Canal St-Martin. It seems a strange loss of confidence in an otherwise canny entrepreneur. And if he had just stayed the course, he would have seen the company overcome its tribulations and become very lucrative indeed, particularly after a merger that brought together all the competing companies to form the Compagnie Générale des Omnibus in 1854.

He would also have seen further innovations, some successful, others…not so much. In the mid-1830s, one Marie-Toussaint-Henri, vicomte de Botherel, was so excited by the prospects of the omnibus that he decided to create omnibus-restaurants, from which cooked meals would be delivered to people’s houses. He spent vast sums from his considerable fortune building a huge central kitchen on the rue de Navarin and opening a café on the rue Neuve-Vivienne, but the logistics didn’t work and the business failed.

In 1853, the impériale was introduced, an omnibus with seating on the roof. At first, this upper deck was open to the weather, reached by a ladder, but later on some vehicles it was enclosed, and the ladder evolved into a curving staircase up the back of the omnibus.

The 1870s saw the introduction of the tram. Trams run on metal rails with less friction than wheels on a cobbled roadway, so the same number of horses can pull larger vehicles with more passengers. And the ride is much smoother. At first, the Compagnie Générale des Omnibus resisted the changeover. It had become so profitable with its existing vehicles (and with its sizable real estate holdings) that it was getting complacent and was reluctant to invest in new vehicles. The Paris authorities were getting desperate, however, as congestion increased and more and more tourists flocked to the city, attracted by the great exhibitions of 1855 and 1867. Tourists need transit. Eventually, in 1872, the city laid down tram lines (the tracks were set into the roads so that other vehicles could pass over them) and insisted that the company operate horse-drawn trams.

The next step was to get rid of the horses. The company had more than 9,000 of them at the time, and they needed feed, and stables, and veterinary care. Steam locomotion was considered too risky, but in 1880s, electric traction became an option. In this postcard, you can see a double-decker tram and a two-car tram passing the overground portion of the Metro on the Boulevard de la Chapelle near the rue d’Aubervilliers.

The double-decker trams maintained the stairway up the back of the vehicle, and from time to time, accidents occurred, like the one illustrated on the front page of Le Petit Journal, June 6, 1909. 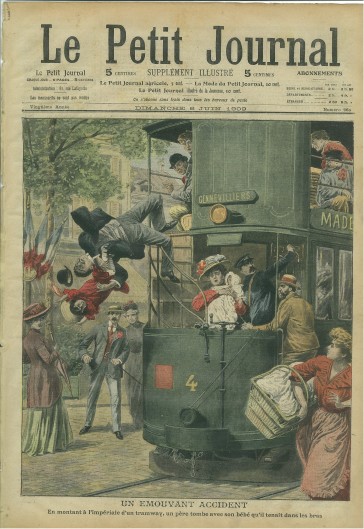 A father holding his two-year-old was mounting the steps when the vehicle started with a jolt, sending him flying, as his horrified wife, holding their younger child, looked on. The father survived with little more than cuts and bruises, but the toddler died.

Trams were gradually overtaken by motor coaches, but horse-drawn omnibuses remained a common sight on Paris streets for many years. The very last horse-drawn impériale made its final trip between La Villette and St-Sulpice on January 11, 1913, accompanied by a crowd of well-wishers. In this image from Gallica of that historic run, it seems that it was foggy that day.

The burly percherons were put out to pasture in the countryside, the men who had cared for them looked for other work, and the streets of Paris never looked quite the same again.

Further reading: Very little is available in English on the subject of early transit in Paris, with the exception of the wonderfully detailed book by Nicholas Papayanis, Horse-Drawn Cabs and Omnibuses in Paris: The Idea of Circulation and the Business of Public Transit (Louisiana State University Press, 1996).

Parisian Fields is the blog of two Toronto writers who love Paris. When we can't be there, we can write about it. We're interested in everything from its history and architecture to its graffiti and street furniture. We welcome comments, suggestions, corrections, and musings from all readers.
View all posts by Parisian Fields →
This entry was posted in Paris civic functions, Paris postcards, Paris streets, Paris travel and tagged Compagnie Générale des Omnibus, Duchesse de Berry, Entreprise Générale des Omnibus, Faubourg St-Martin, impériale, Le Petit Journal, Nantes, Nicholas Papayanis, omnibus, omnibus-restaurants, Stanislas Baudry, trams, tramways, Vicomte de Botherel. Bookmark the permalink.

19 Responses to The invention of the omnibus