Are you sitting down?

A few years ago, I bought a folding shopping bag from Monoprix, which I have used regularly ever since. The pattern on it is intended to represent Paris: the Eiffel Tower, the French flag, a person with shopping parcels, a suitcase, a tree, and a bench. Gazing idly at it the other day, it occurred to me that the anonymous designer had avoided some of the worst Paris clichés (such as poodles) and offered a take on Paris that suggested tourism, shopping, and sitting down in the shade. And that got me thinking about benches.

Today, benches are ubiquitous on Paris boulevards and in parks. It was not always so. Before the days of Haussmann, sitting down in the street meant either a chair outside a bar, or making use of a convenient chasse-roue, as we see in this photo by Charles Marville.

Even gardens were short on benches. The opening pages of Les Promenades de Paris by Adolphe Alphand (c1870) contain a brief illustrated history of gardens going back to the Egyptians, including gardens in Japan and China, and formal gardens from the French and Italian Renaissance. Is anybody sitting down in any of the pictures? No. Ladies and gentlemen drift through the landscape admiring the parterres and the statues and the long vistas, but nobody is seated.

The first picture in Alphand’s book to show anybody sitting down is on page 213, in a view of the Square des Arts et Métiers.

The rest of the book is a high-level how-to for public gardens, with examples drawn from Alphand’s own creations: the Bois de Boulogne, the Bois de Vincennes, the Parc Monceau, and the Buttes-Chaumont, among others. If you want precise instructions for planting a full-grown tree or creating a water system for a fountain, Alphand is your man.

Among the detailed diagrams for everything from pavilions to pissoirs are three for benches that any Paris visitor will recognize: the curvy version with multiple slats (known as the “gondole”), the simple planks held up with metal supports that resemble tree branches (the Buttes-Chaumont model), and the two-sided version usually seen in the boulevards (banc-double). 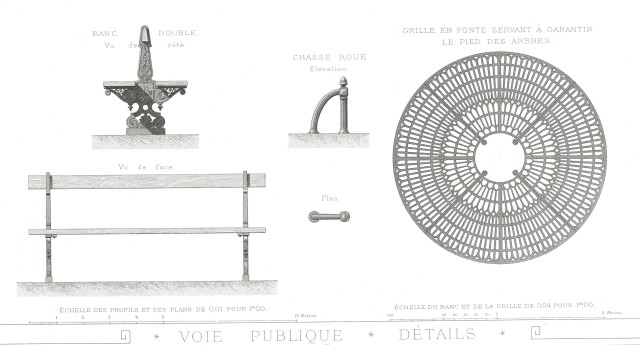 The designs are usually attributed to Gabriel Davioud, along with the designs of other quintessential elements of street furniture, such as lamp standards and news kiosks. Did Davioud actually draw the designs himself? Or did he simply sign off on designs created by his staff in his capacity as the “chief architect of Paris promenades” under Alphand? Whichever it was, his is the name attached to them.

The three designs are still in evidence today. The gondole shown here is in the Bois de Boulogne, in a spot favoured by the resident cats.

This Buttes-Chaumont model is actually in the Square des Batignolles. This design is part of a trend visible in many parks to imitate wood in metal or concrete.

And this rather grubby banc double is from the boulevard Edgar Quinet, just outside the Cimitière de Montparnasse. 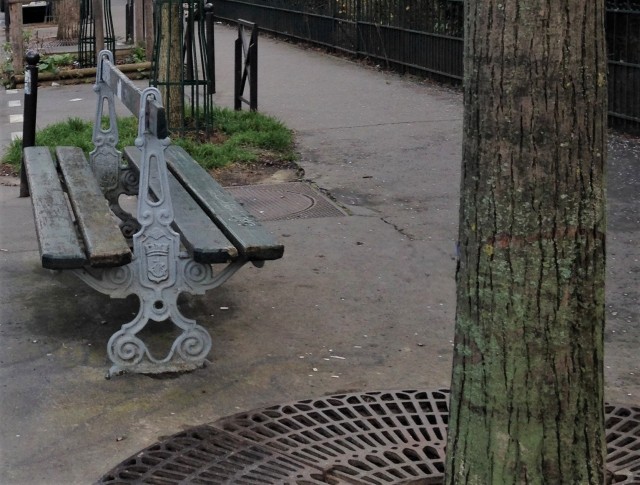 There is also a hybrid model : a single bench made with uprights similar to those of the banc-double. This one is in rue Cardinet, just outside the new Clichy-Batignolles-Martin Luther King park. 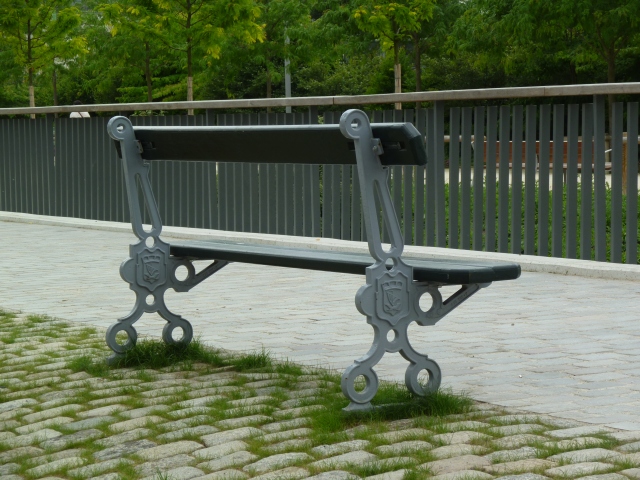 According to urbanist Stéphane Malek, the first benches were not just places to rest, but theatre seats that allowed the flâneur to watch the passing parade – and to be seen as well. Malek produced a fairly exhaustive study of public benches for his master’s thesis in 2011, which included maps of the density, location, and even altitude of benches across Paris, created by cartographer Jules Grandin, and displayed on Grandin’s website.

I’m not entirely sure what insight can be gained from that level of detail, but it is impressive, and I say this as someone who has spent a considerable time reading papers by master’s students.

What is more interesting is the social function of benches. An interesting detail comes from an 1898 Baedecker guide (p. 74), which explains that chairs on the boulevards can be rented for 10 centimes, but benches are free.

There is something inherently democratic about a bench. One might sit next to almost anyone (hence the popularity of the park bench as a setting for New Yorker cartoons). Benches also allow for hand-holding, kissing, and all sorts of romantic encounters. Georges Brassens sings about them in “Les Amoureux des Bancs Publics.”

Nowadays, couples are more likely to be studying their portable phones on benches than engaging in romantic dalliance. 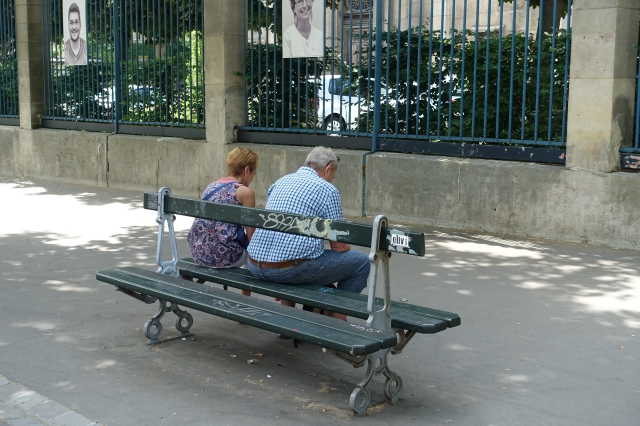 Norman and I have a bench that is part of our history together – the one where we had our first picnic in Paris, the day after our arrival, on our first trip to the city together. Some years later, we went back to the Place Constantin Pecqueur in Montmartre. It is a tiny park with a few trees, a statue, and a great many benches. The benches have been moved away from the centre of the park where we sat, so we do not know exactly which one is “ours.” But it would have been one like this.

The range and shape of benches has enlarged over the years, and so have the numbers of places to sit down in public in Paris, from bus stops to the steps of the new Opera. But there is something timeless about the painted green wood, the shady tree nearby (the designer of that Monoprix bag knew that trees and benches often go together) and the feeling that so many others have been here before, kissing, holding hands, picnicking, laughing, crying, chatting, checking their messages, or watching the world pass by.

Parisian Fields is the blog of two Toronto writers who love Paris. When we can't be there, we can write about it. We're interested in everything from its history and architecture to its graffiti and street furniture. We welcome comments, suggestions, corrections, and musings from all readers.
View all posts by Parisian Fields →
This entry was posted in Uncategorized and tagged Adolphe Alphand, bancs publics, Bois de Boulogne, Buttes-Chaumont, Charles Marville, Gabriel Davioud, Georges Brassens, Jules Grandin, public benches, Square des Arts et Métier, Stéphane Malek. Bookmark the permalink.

14 Responses to Are you sitting down?