I hope some of you enjoyed the traditional French Christmas treat, the bûche de Noël (Christmas log), as we did. But let’s not forget another great French tradition: the bûche de béton. Or as some would call it: faux bois.

Let me explain. The bûche de Noël is the traditional log-shaped Christmas cake with wonderful fillings such as chestnut cream, hazelnut, or chocolate (ours was chestnut, by the way). Béton is concrete, and faux bois means false wood. So I have invented the name bûche de béton for concrete that has been made to look like wooden logs or branches.

This beautiful example of bûche de béton is in the Parc des Buttes Chaumont. The former quarry was turned into parkland in the 1860s, and embellished with a lovely suspension bridge designed by Gustave Eiffel. Considering that the place was filled with rocks, we were surprised to see the approach to the bridge made of concrete formed to look like stone (faux pierre?). 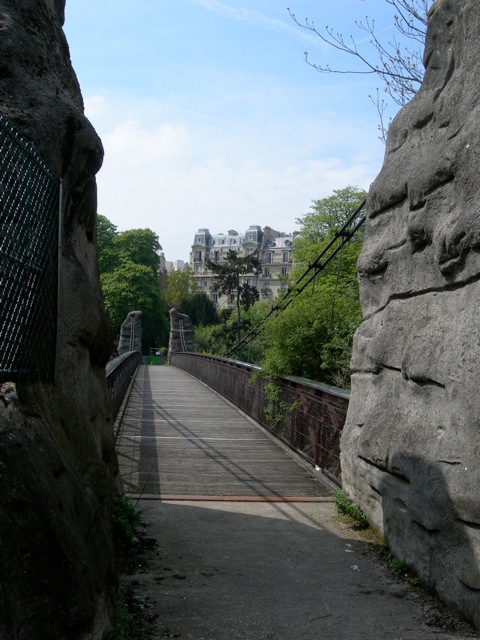 And while we are busy faking it, take a quick look at this wonderful waterfall. Looks so natural. As it should. After all, the French are masters of concrete. Yes, this is a 20-metre-high artificial waterfall made of concrete in the same park.

Historically we owe a great debt to France for many pioneering advances in the use of this marvellous building material. However, allow me one more digression. I love much of the cast metal sculpture to be found in galleries, but am equally enamoured of the more anonymous but more-frequently-seen street furniture.

Here what seems like wood is actually cast iron. I regard this as part of the sculptural and artistic richness of Paris. But images of sculpture such as the one shown below are undoubtedly regarded as more mainstream. This one, in the park near the Palais de Chaillot, is dedicated to François Joseph Paul de Grasse (1722-1788), a French naval officer who aided the Americans during the American War of Independence. He even appeared on an American postage stamp in 1931. 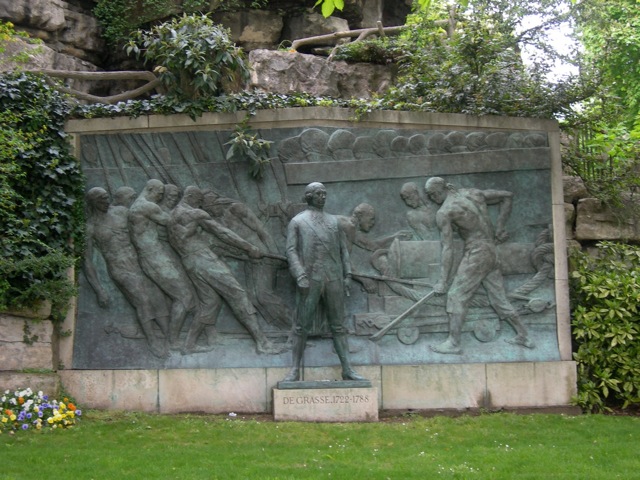 Now look carefully above the sculpture and you will see what looks like several denuded branches. Let’s look again from another angle.

You can still see de Grasse on his plinth on the right. And those branches? Faux bois railings. Beautifully executed, artfully placed, and very useful when walking up or down the uneven stairs.

On another occasion, as we scrambled about the Louise Michel park on the Butte Montmartre looking for a location from which to duplicate the view of the Dufayel department store Philippa had found on an early postcard, we were rewarded by some stunning examples of bûches de béton.

Sometimes they modestly marked the edge of the path. 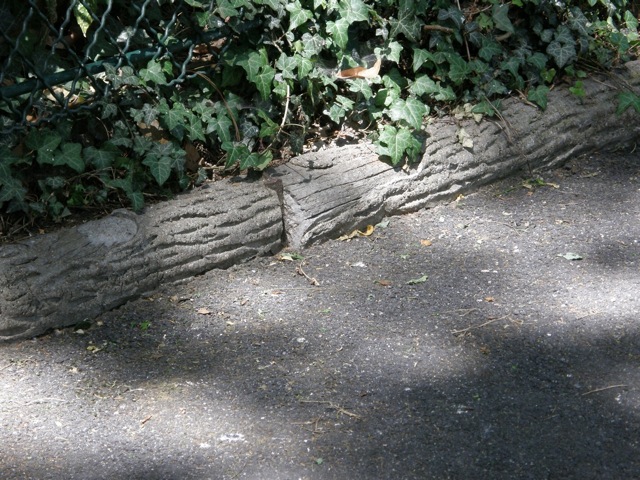 At other times they suggested what we should be climbing towards.

And then they offered a gentle stairway.

But perhaps most of all, they provided an attractive reminder of the richness of everyday outdoor public sculpture in Paris. For me these are French art—everyday art, but art nonetheless. Simple art, made by covering a steel framework with skilfully worked concrete.

Enjoy your bûche de Noël each Christmas. And enjoy your bûches de béton as often as you visit a Paris park. In the New Year, I will be looking for and enjoying more of them in Paris. Of course, if I get desperate and need a bûche de béton fix in a hurry, I know of a sacred grove of them just outside Toronto.

Text and photographs by Norman Ball

Parisian Fields is the blog of two Toronto writers who love Paris. When we can't be there, we can write about it. We're interested in everything from its history and architecture to its graffiti and street furniture. We welcome comments, suggestions, corrections, and musings from all readers.
View all posts by Parisian Fields →
This entry was posted in Paris parks, Paris streets and tagged béton, bûche de béton, bûche de Noël, Butte Montmartre, cast iron, Christmas, concrete, François Joseph Paul de Grasse, Gustave Eiffel, Les Grands Magasins Dufayel, Louise Michel park, Palais de Chaillot, Parc des Buttes Chaumont. Bookmark the permalink.