Gustave Eiffel did not sleep here

Posted on October 8, 2017 by Parisian Fields

On a recent visit to Laywine’s, our favourite pen and stationery store in Toronto, Philippa picked up a desk pad made by the French paper firm Exacompta, and found the following note on the front:

Made in the heart of Paris for over 50 years in a workshop built by Gustave Eiffel, the FAF (feuille à feuille) pad is a practical and highly functional desk pad.

A workshop built by Eiffel? Really? We know the Exacompta building, which sits beside the Canal St-Martin on the Quai de Jemmapes. Here is a picture from Wikimedia. It’s a handsome industrial site, and the fact that the building is still in use for industry in the middle of Paris is astonishing. But Gustave Eiffel…?

Actually, no. Saying Eiffel designed a building in France is like saying “George Washington slept here” in the United States. It impresses people and occasionally it might even be true. But in this case, the architect was one Paul Friésé. We cannot account for the Eiffel myth, but in laying it to rest, we had a chance to consider an unusual building and its history.

The building at 132-134 quai de Jemmapes was commissioned by la Compagnie Parisienne d’air comprimé (the Paris Compressed Air Company). In France, compressed air has a long history as an energy source, but the Quai Jemmapes building was to be a coal-powered thermal electric generating station. This may come as a surprise, because the photo above does not suggest electricity generation, does it?

In the late 19th century, electricity was an exciting new technology and Paris embraced it with enthusiasm. Electricity gave a whole new meaning to the words “City of Light.” At first, a range of private companies generated and sold electrical power. Since the Paris Compressed Air Company already had a reputation for supplying energy, it was quick to venture into this new energy source.

In 1889 the City of Paris gave the company the right to build a thermal electric generating station on the quai de Jemmapes and to supply the eastern part of Paris with electricity. It was a massive project. As a leading industrial architect, Paul Friésé was an obvious choice.

He was a graduate of the École des Beaux Arts whose wide-ranging projects included other electrical stations, such as an enormous generating station near the Gare de Lyon where the RATP offices are now, and several impressive Paris substations that are still standing.

The selection of a canal site made sense. Thermal generation of electricity depends on steam to power the turbines that in turn drive the generators and that means massive amounts of coal to heat water in boilers. The canal St-Martin site has lots of water and its barges could deliver a seemingly endless supply of coal. The picture below was taken from the top of the building in 1920, showing the view northwest; note the many chimneys in this formerly industrial area.

Friésé also had to work within some strict requirements. Given the limited electrical transmission technology of the day, the generating station had to be close to its intended market. And that meant that Friésé’s building had to fit into a tight site in a dense neighbourhood that included the St-Louis Hospital. In this image, also taken from the roof of the station in 1920, you can see the hospital to the left, with its rows of identical dormer windows. 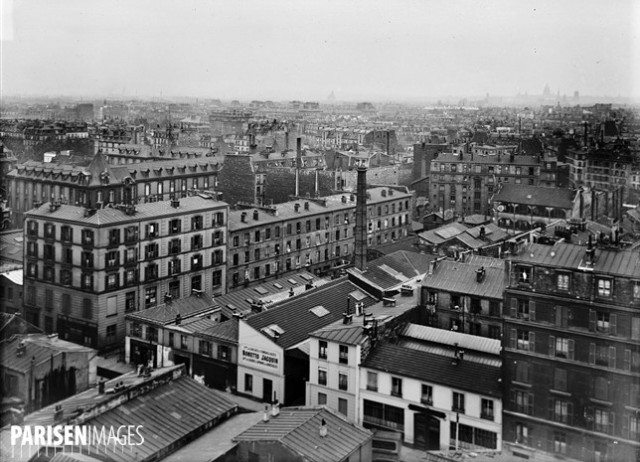 Another limit was on the size of the generators. They were constructed in Belfort by the Société Alsacienne de Constructions Mécaniques (now Alstom) and brought in on trains and enormous wagons, but the need to transport them such a distance limited their size. In this image from Le Génie civil, you get a sense of the scale.

Engineering projects of this era often combined the gigantic with a sense of politeness and attention to appearance and context. Friésé created a building that did not overwhelm the neighbours and yet had a sense of gravity. He won a medal during the 1900 Exposition for this design. This is how the building looked in its heyday. Note that coal is being unloaded from the canal barge in front. 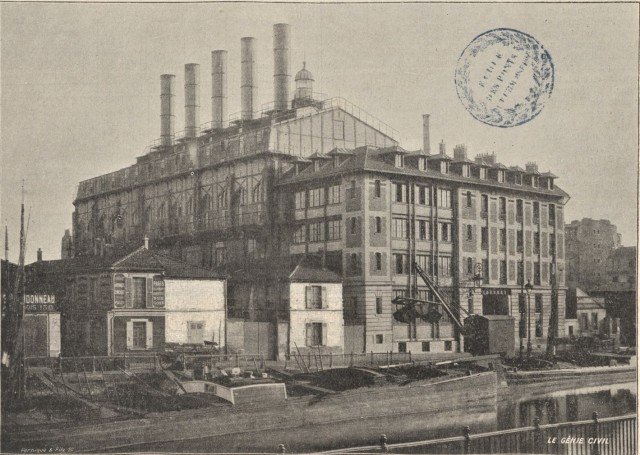 Despite Friésé’s achievement, his magnificent generating station had a relatively short productive life. In 1896 the Paris Compressed Air Company started supplying electricity to customers. But the administration of Paris soon decided to have only one company supplying electricity, in this case la Compagnie Parisienne de Distribution d’Électricité (CPDE). In 1910 the Paris Compressed Air Company’s concession was terminated.

There was little else to do but sell the company, and in 1914 it was purchased by the CPDE. What had been one of the most up-to-date electrical generating plants in France was taken out of operation by its new owners, and the massive generators fell silent.

For several decades after that, the site had a chequered career. The chimneys were demolished, as they were no longer needed. The luxury shoe manufacturer Saderne took over some of the space, but suffered a fire in 1917. Saderne went bankrupt in 1927. For a while, the Labor company manufactured workers’ clothing there (such as the once-ubiquitous blue overalls and smocks that so many French workers wore).

Finally, in the 1950s, Clairefontaine bought the site, as well as buildings to the north of the former generating station, and it has been there ever since. The company is now known as Exacompta-Clairfontaine, as many French paper businesses have consolidated (Rhodia notebooks and Mignon cards and G. Lalo stationery are all brands of the same giant paper organization based here).

The former generating station was declared a historic monument in 1992, but the generating machinery has undoubtedly long since disappeared. It is hard to know anything for sure, though, as access is forbidden to outsiders. The best we can do is show a Google Earth overview of the site. In addition to the red-roofed building facing the canal, the ones behind it and on the left are also part of Exacompta.

As for the architect, he died in 1917, during the First World War. He was from Alsace (born in Strasbourg in 1851), and when the First World War broke out, he volunteered to serve, even though he was 63 at that point. He was deployed in the reserve army as a translator. He was wounded in the Battle of the Chemin des Dames, and died shortly thereafter. He is buried in the Montparnasse Cemetery. A book about him is due out from Memogrames next month (November 2017) in honour of the centenary of his death.

Text by Norman Ball, contemporary photographs from Wikimedia, historic photographs from Gallica and Paris en images. Thanks also to Denis Cosnard, whose detailed blog, “Des usines à Paris,” provided helpful information. To see more photographs and an interesting analysis of the building, see the graduation report by Merle van Marissing from TU Delft University, in which the building is re-imagined as a library.

Parisian Fields is the blog of two Toronto writers who love Paris. When we can't be there, we can write about it. We're interested in everything from its history and architecture to its graffiti and street furniture. We welcome comments, suggestions, corrections, and musings from all readers.
View all posts by Parisian Fields →
This entry was posted in Paris architecture, Paris history, World War I and tagged Clairefontaine, Compagnie Parisienne d’air comprimé, Compagnie Parisienne de Distribution d’Électricité, Denis Cosnard, Exacompta, G. Lalo, Labor, Mignon, Paul Friésé, Quai de Jemmapes, Rhodia, Saderne, Société Alsacienne de Constructions Mécaniques. Bookmark the permalink.

9 Responses to Gustave Eiffel did not sleep here