Fifty Ways to Close Your Shutters

On our last visit to Paris in June, we did most of our travelling by bus, which meant time spent waiting at bus stops and journeys on which we gazed out the window at the streets, instead of hurtling through a darkened tunnel on the Metro. And that meant studying Paris facades, ever familiar and ever new, noting details and differences.

This time it was shutters. I started to notice all the different forms and styles and began to photograph them. For example, here is a photograph showing the two most common styles of all – exterior wooden louvred shutters above and folding metal shutters below. Utterly ordinary, and yet remarkable.

When I tried to figure out the correct terms in French, I found myself in a thicket of words – volets, persiennes, contrevents, jalousies, stores, couvre-fenêtres, grilles de défense – plus a host of variations. Volets roulants valenciennes, persiennes à l’abbattant relevé, store cassette…

For no particular reason (other than what else are you going to do while waiting at a bus stop?), I decided to create a typology of shutters.

First off, those wooden shutters are called volets (or to be more precise, volets battants, to distinguish them from volets roulants, or roll-down shutters).* Here is a typical Paris façade, photographed as a demonstration passed in front, with residents looking out to see what is going on. But when I looked again, I noticed that these windows are slightly unusual, because they are combined with individual awnings. 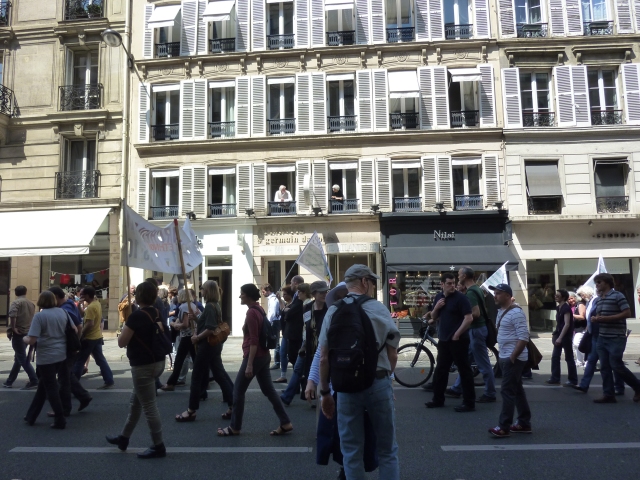 These shutters need regular painting to keep them looking this tidy. Many Paris facades, however, do not get that kind of attention.

Most, but not all, shutters have louvres in them to let through light or air. The term jalousie (literally, “jealousy”) was coined for shutters that allow the person inside to look out without being seen. 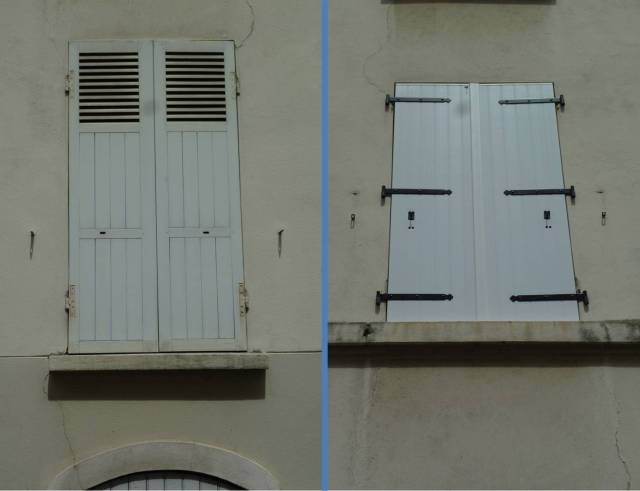 The ones on the right with large and obvious hinges seem to be a very traditional design for what appear to be fairly modern security shutters.

Inside the shutters, there are other details, all with specific terms. This comes from a helpful website called “lexique des volets,” by a shutter manufacturer.

Such old-fashioned and rather rustic shutters can be found in Paris, if you look.

Notice the hardware on the open shutters. The interior closing mechanism is called an espagnolette. There are several types, shown on the website of a woodworking company.

Just when you thought shutters were simple things.

But I wanted to find the word to describe something we have seen from time to time – the little fixtures on the exterior wall used to hold the shutter and prevent it from swinging back and forth in the wind. Some are plain, but some have faces or other decorations on them. Norman photographed one in the Marais a few years ago.

If you look closely at the next photo, you will see them holding back the shutters. (This is quite a complicated window, with its security grill and frosted glass privacy screen.)

I found that they are called “arrêts de volet” (shutter stops) or “arrêts de vent” (wind stops), and they come in many forms and colours. You can still buy ones with faces on them: arrêts bergère, suggesting that the face with the hat and the long hair is that of a shepherdess. Isn’t French hardware wonderful?

But these are modern ones. The oldest are simply bits of metal in a T-shape that project out from the wall and swivel to hold the shutter against the wall. You can see them at the Maison de Balzac, where they are still in use, painted green to match the shutters.

Commercial premises sometimes have wooden shutters that fold right into the wall and don’t need an arrêt de volet. In the next picture, I like the way everything, including the hinges, are flush with the wall. (I am also fascinated by the various metal openings near the ground, but any investigation of them will have to wait for another blog.)

Then there are persiennes. The term is used for a variety of louvred shutters, but it seems to be the common term for those folding metal exterior shutters that we have wrestled with in various rented apartments. They always seem to be slightly bent, so it is hard to get the closing to engage. Years ago, when I was a student and au pair in Paris, I used to help an elderly lady downstairs with her persiennes in the evenings. She was in her eighties and very bent and frail. She seemed able to open them on her own, but struggled with closing them.

Here is a photo that Norman took of the rusty persiennes in a flat we rented several times in the Marais.

Persiennes of this type have the advantage of tucking neatly into the window embrasure, so when they are open, they do not clutter the façade or obstruct the view. But closed, they are not particularly attractive.

Modern shutters tend to be the roll-down kind (volets roulants), also very dull-looking, but practical. Some are electric and roll down at the push of a button, others have a hand-crank. Many are used as security shutters on commercial premises, and they tend to attract graffiti. 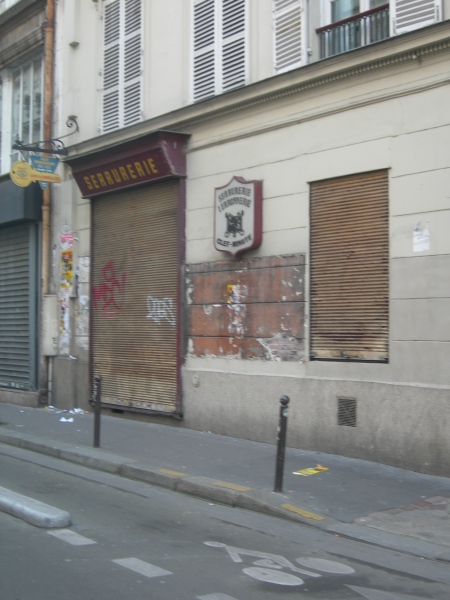 On this Art Deco building, note the frames that allow the shutters to function as awnings, open at the bottom.

Fabric awnings and blinds are known as stores, and the window awnings that stand at an angle to the window seem to be called stores à l’italienne. (Stores also can mean interior blinds, as in stores venétiens or Venetian blinds.) I noticed awnings on quite a few institutional buildings. Here is the Port Royal maternity hospital. 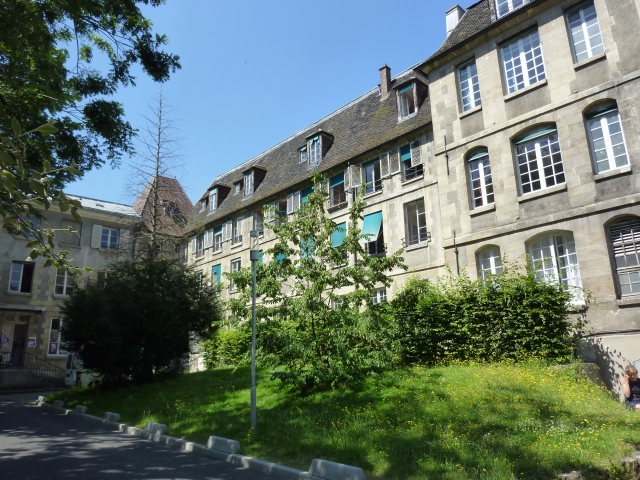 (Note also the interesting half-shutters just under the eaves.)

Exterior window blinds made of fabric seem quite common. Here are some rather dingy ones on a university building in the Latin Quarter. Of course, they would be impossible to keep clean. 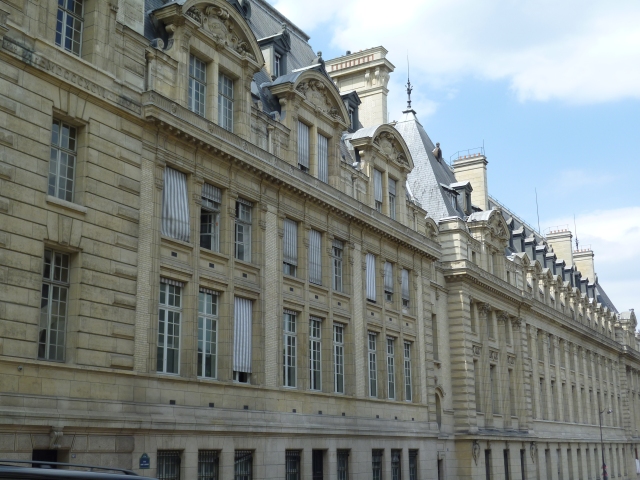 The more I looked at windows, the more variations I noticed. This row of small shutters intrigued me. With all those huge expanses of glass above and below, what is the purpose of the shuttered windows? And note the persiennes to the left that leave the curved top of the window uncovered. The question of what to do with windows of unusual shapes must bedevil some Parisian homeowners. 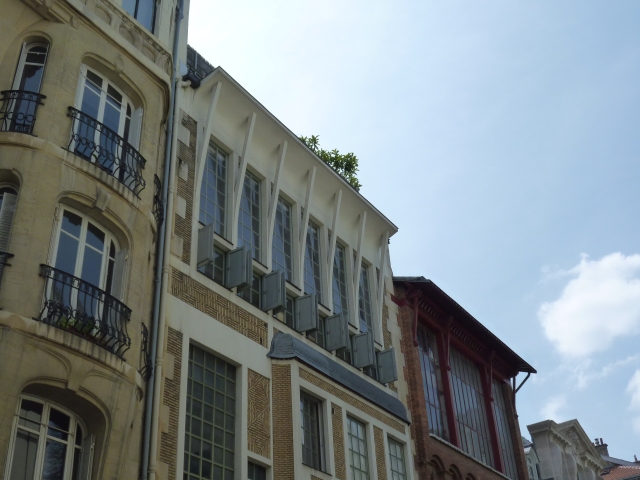 Of all the words I discovered in my typology of windows, the most exotic is moucharabieh. This is a word from North Africa for the filigreed window coverings, usually carved wood, on Moroccan buildings. The most outstanding Parisian version is found at the Institut du Monde Arabe, where the openings are designed to respond to changes in the light by opening and closing.

My typology is hardly exhaustive, and the possibilities are endless. One could compile a further list just of modern window coverings, quite a few of them one-off architectural features.

Next time you are standing at a Paris bus stop, you can pass the time by counting the number of types of shutters and window closings you can see. Chances are, even a single façade will have more than one type. How many do you see in the photo below? 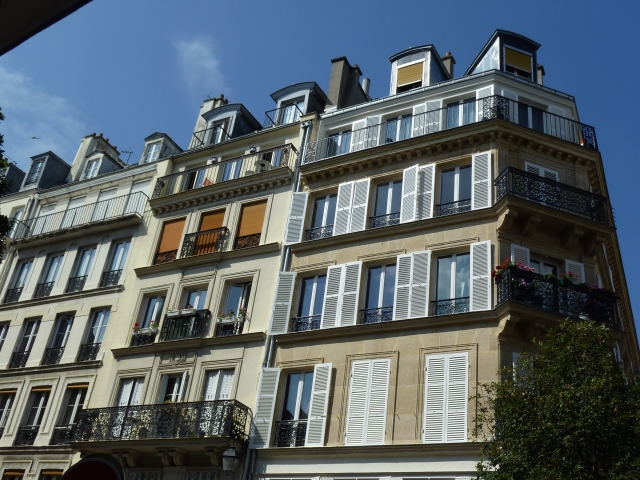 *Volet is a word with many, many meanings. This translation website shows the many ways in which this word is used, and “shutter” is mentioned only a couple of times.

Parisian Fields is the blog of two Toronto writers who love Paris. When we can't be there, we can write about it. We're interested in everything from its history and architecture to its graffiti and street furniture. We welcome comments, suggestions, corrections, and musings from all readers.
View all posts by Parisian Fields →
This entry was posted in Paris architecture, Paris hospitals, Paris streets and tagged arrêts bergère, arrêts de vent, arrêts de volet, awnings, espagnolette, Institut du Monde Arabe, jalousie, Maison de Balzac, moucharabieh, persiennes, Port Royal maternity hospital, shutters, stores à l’italienne, stores venétiens, volets, volets roulants. Bookmark the permalink.

14 Responses to Fifty Ways to Close Your Shutters