Once we could send and receive images, I signed on to Instagram and posted a few shots of our surroundings (not, at the moment, Paris).* My followers consist mainly of family members, some friends, and, oddly, attractive young women who post selfies (not sure what that’s about, but it’s a free country).

Instagram is, of course, awash in touristy shots of Paris, but we prefer the less-well-known corners of the city, as captured by photographers such as Adam Roberts on @invisibleparis. And one day, after I posted a shot of an overstuffed chair abandoned on a Toronto sidewalk, I received a “Like” from @lesenchaises, an Instagrammer who posts shots of empty chairs in and around Paris.

The images range from the romantic melancholy of elderly abandoned chairs to the severe banality of plastic chairs in laundromats.

At this point, I realized that Norman, too, has often photographed chairs and benches in the city, so I asked him for some of his best shots. And I was astounded at the diversity of the options Paris offers to those who want to rest their feet.

Park chairs, known as Luxembourg chairs, come in upright and relaxed models in a restful shade of green. Today, these are manufactured by a company called Fermob. According to the Fermob website, “the legendary chairs and armchairs of the Jardin du Luxembourg [were] created in 1923 in the Paris parks department workshops, and…Fermob still manufactures [them]  today for the city’s public gardens.” Fermob is based in Thoissey, about 50 kilometres north of Lyon.

They are actually more comfortable than these lounge chairs on the roof of the Cité de la Mode et du Design, although the view is superb.

And there are café chairs galore, which come in a profusion of colours, 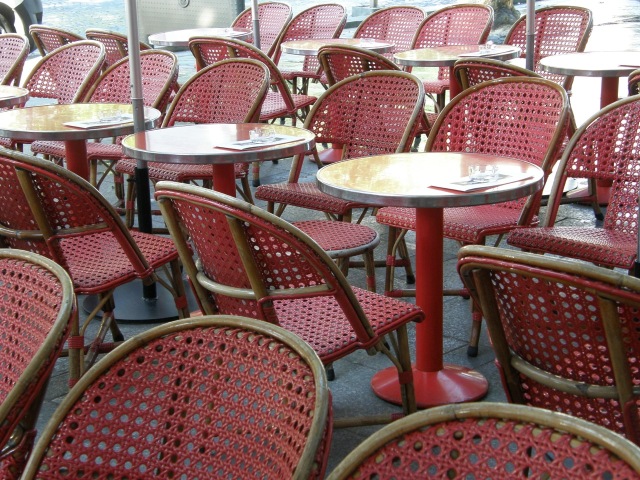 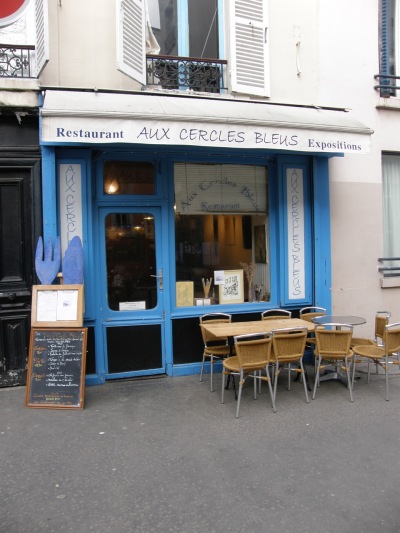 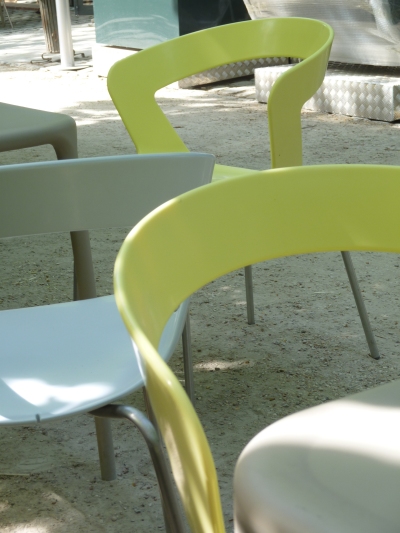 Many of the woven rattan chairs come from a company called Maison J. Gatti, based near Fontainebleau.

Their website displays an astonishing range of colours and styles, with names like Bonaparte, Rivoli,  Kléber, Matignon, and Tuileries. I rather fancy a nifty red number called Versailles that I think would look splendid on our front porch. 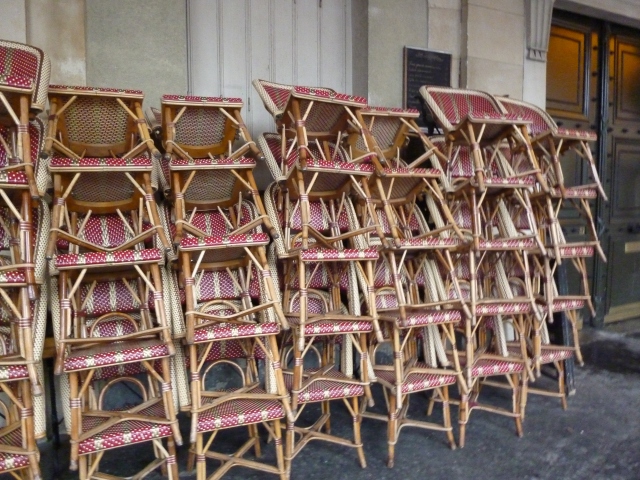 Then there are the classic folding metal bistro chairs, which are less comfortable and tend to be rickety, but are nonetheless charming and colourful. This one is admittedly past its prime.

These were originally known as “Simplex” chairs and the patent was registered in 1889 by one Edouard Leclerc, so the design is as old as that of the Eiffel Tower. Clearly, 1889 was a good year for metalwork. Apparently the design was immediately popular with sellers of lemonade, who could fold them up at the end of the day, and thereby avoid paying for a fixed terrace for their patrons.

The colourful modern versions are made by Fermob. 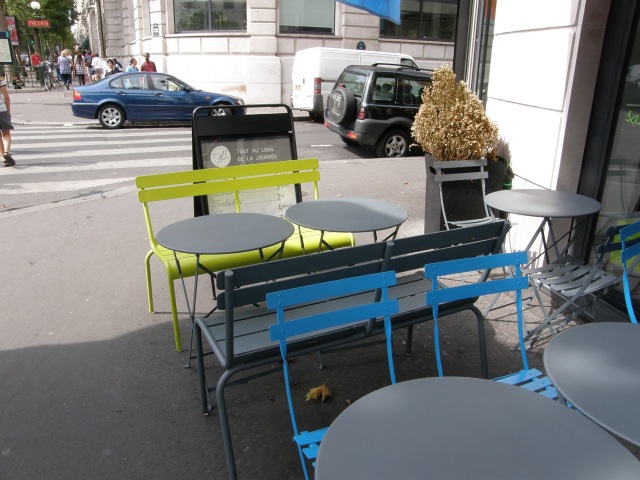 Another addition to the roster of famous café chairs is the Tolix A chair, which dates from 1934 and was designed by a metalworker called Xavier Pauchard. These sturdy chairs are made in Autun in Burgundy and were once used on the decks of the S.S. Normandie. We have some recently made galvanized ones on our own back porch; the design has not changed. 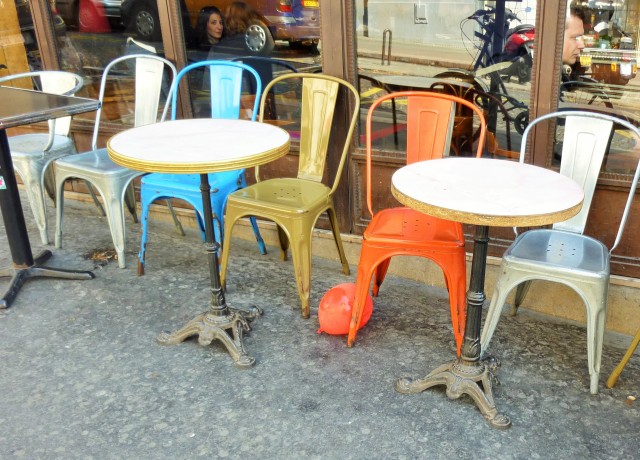 But even before Gatti and Simplex and Tolix, there was the classic Thonet chair, the No. 14, one of the bestselling chairs in history, made from six pieces of wood, ten screws, and two nuts. It was launched in 1859 and has sold in the millions. Michael Thonet’s innovation was the steam-bent wood pieces that give the chair its graceful appearance. And it is graceful, but it is not French (Thonet was German and established his business in Vienna).

To us, France seems to be the leader in stylish seating. Even the seating in the Metro has a certain je ne sais quoi – at least the eggcup-shaped metal platform seating, which is more elegant than the plastic (or fiberglas?) seats.

Many tourists form an impression of Paris as a place of endless walking and sore feet. In fact, Paris is a place to sit, to have a coffee, to meet a friend, to read a book in the park. With so many inviting places to take a seat, why walk? 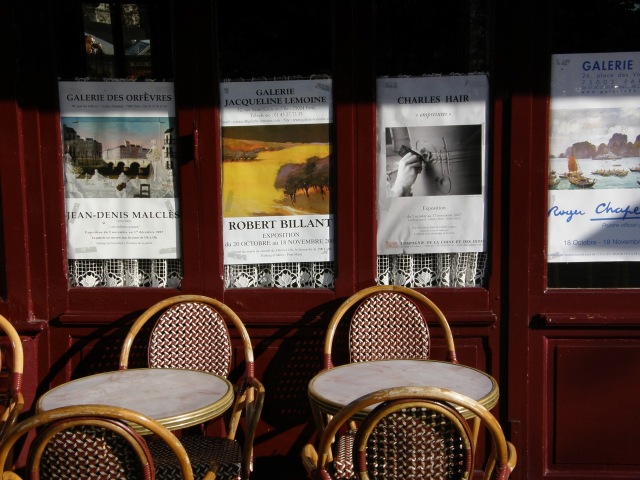 *My Instagram address is @pcampsie, and so far, the pictures are all from Toronto and environs.

Parisian Fields is the blog of two Toronto writers who love Paris. When we can't be there, we can write about it. We're interested in everything from its history and architecture to its graffiti and street furniture. We welcome comments, suggestions, corrections, and musings from all readers.
View all posts by Parisian Fields →
This entry was posted in Paris streets and tagged @invisibleparis, @lesenchaises, Adam Roberts, Cité de la Mode et du Design, Edouard Leclerc, Fermob, Gatti, Instagram, Jardin du Luxembourg, Luxembourg chairs, Michael Thonet, Simplex, Thonet, Tolix, Xavier Pauchard. Bookmark the permalink.

10 Responses to Take a seat