The Technology of Compassion

Posted on September 30, 2012 by Parisian Fields

I had just finished typing when typewriter collector Martin Howard took the photo below. If you read Braille, you will see that it says “parisian fields.”

The Pantheon is the final resting place of France’s heroes: Voltaire, Victor Hugo, Émile Zola. In 1952 the remains of Louis Braille were placed there—well, most of him. They left one of his hands in his home town of Coupvray, where he was born on 4 January 1809. He died in 1852, having spent most of his life in Paris. (The picture shows the memorial in Coupvray.) 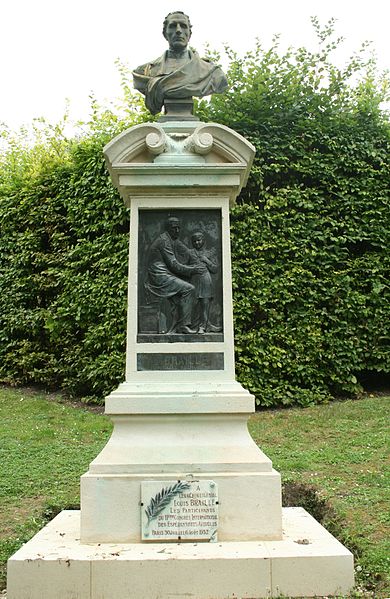 Louis was born sighted, but when he was three, he accidentally poked one eye with an awl in his father’s harness-making shop. It became infected and in that pre-antibiotic era, the painful infection spread to the other eye. At five, he was completely blind. In an age when the blind usually suffered a life of neglect and ridicule, Louis was fortunate. His parents, along with the local priest and schoolteacher, felt he should go to the local school and learn by listening.

He did well and by 1819, aged ten, he was in Paris as a scholarship student at the National Institute for Blind Youth (L’Institut National des Jeunes Aveugles). The Institute had been founded in 1784 by Valentin Haüy, a philanthropist and linguist who spoke ten languages. When Louis arrived, Haüy was no longer director, but his ideas were still respected.

In 1859 Haüy’s works were commemorated by a moving statue in the Institute’s courtyard, carved by sculptor Jacques Joseph Emile Badiou de la Tronchère.

Valentin Haüy was sighted, but the experience of seeing blind people being mocked during a religious street festival at the Place de la Concorde had reshaped his life. He wanted to open the world of the written word to the blind. In 1784 he developed a much-praised method of imprinting or embossing raised letters on heavy paper which the blind could be taught to read by touching the raised outline of the letters. Unfortunately, it was a cumbersome and expensive method of communicating.

Louis Braille learned Haüy’s method of recognizing the shapes of letters standing out from the page by touching them. But he was frustrated by the limited amount of material produced by this method. And how could he write to others, such as his family, without having others do it for him? Louis’s father made him a set of leather letters he could trace, but he wanted a better system.

Help came from an unusual direction. Years before, the Emperor Napoleon had demanded that his soldiers be able to compose and read messages at night without making a sound or using a light. One of his officers, Charles Barbier de la Serre, came up with a system of 12 raised dots for writing and reading messages.

This sonograph “night writing” was a limited system. For one thing, it was based on 36 different sounds, rather than normal spelling. Given regional accents and variations in pronunciation for any given word, the system could easily lead to confusion. For another, it was technically difficult to produce and read, because each “cell” representing a phonetic sound was composed of 12 positions to accommodate dots. Still, the system embodied two important principles. First, it was tactile. Second, the letters were represented by the position of the dots rather than the actual shape of each letter.

Braille learned the “night writing” system. But he still felt that the system needed to be simplified.

By the time he was 15, Louis had come up with a system based on actual spelling and a simplified 6-dot system. Each cell consisted of two vertical rows of three dots each. He even adapted the system to music notation. At the age of 20, in 1829, he was the published author of The Method of Writing Words, Music and Plain Song by Means of Dots, for the Use by the Blind and Arranged by Them. 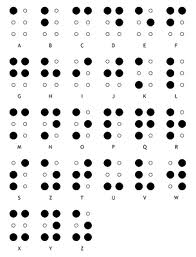 When he had finished his studies, the talented Louis was hired as a teaching assistant and made a professor at the school in 1833. He taught history, geometry, and algebra.

Now you’d think that the world would recognize the value of his breakthrough system and beat a path to his door. Alas, educational institutions tend to be conservative. Although at first his system of writing was popular with students and supported by successive directors, in 1840, a new director at the school banned the system and even had books burned as part of his campaign to adopt an inferior American system that was later abandoned. And when a history professor at the school had the nerve to have a book translated into braille, he was fired.

Students continued to push for change, but Louis had been dead for two years when the school finally adopted the Braille system in 1854.*

One problem remained. Writing in Braille still had to be done by hand with an awl and a tablet. How could one quickly create Braille letters on paper? In an era when so many things had been mechanized, why not find a mechanical means for the blind to create their Braille cells?

The typewriter is one of those devices that has been invented over and over again. The history of early typewriters is confusing and littered with dubious claims and counterclaims. However, I accept that the oldest surviving example of typewritten text comes from Italy in 1808 (it is shown below). It was typed by the blind Countess Carolina Fantoni da Fivizzano on a machine made for her by an Italian nobleman Pelligrino Turri. Turri was fond of the vivacious and charming young Countess and devastated when she lost her sight. The grief-stricken admirer vowed to create a machine to let her write to friends. And he did just that. His typewriter allowed the Countess to say what she wanted in private and do it in a way that could be easily understood by the intended sighted reader, one of whom was the inventor and, it seems, her lover.

More typewriters would follow, many driven by concern for the blind. Several, including one made by Foucauld in Paris, tried to satisfy both sighted and blind by simultaneously printing letters and embossing Braille dots. It was not a success. The effective mechanical production of Braille text by the blind was finally made possible by Frank H. Hall in Jacksonville, Illinois.

On 1 July 1890, following 25 years’ experience in the public schools of Illinois, Mr. Hall was appointed Superintendent of the Illinois Institution for the Education of the Blind. He set to work to create a better way for blind individuals to write in Braille. He completed his first machine in May 1892 (according to the school’s publication) and by 1893, there were 25 in use at his school and about 75 had been sold to other institutions and individuals. It was an astounding machine in terms of mechanical simplicity and its impact on the life of the blind.

This beautiful unrestored machine shows evidence of long use: six keys with beautiful wear patterns. How nice to see antiques which have not had evidence of their years torn away by overly enthusiastic restoration.

Each of the six keys activates a rod, which moves up to emboss a dot on the paper. To understand how this works, note the piece of metal rising gracefully from the metal above the keys and then arching gracefully towards the back of the machine. It looks to me like an elephant’s trunk.

At the back, we see six jointed vertical pieces of flat metal. Philippa thinks they look like insect’s legs. At one end, each is joined to a rod coming from one of the six black piano-like keys. When the key is depressed, one end of the horizontal piece to which it is attached will also fall and the other end will rise. Although they are of differing lengths, each of the rising ends of the horizontally pivoting arms has a stout piece of wire attached to it. This wire strikes the flattened portion of the elephant’s trunk, which is properly known as the “anvil.” Each wire hits the anvil at a slightly different place. Each wire has its own hole in the anvil which limits how far it travels. And if we have put a piece of paper around the cylinder (platen) so it comes between the bottom of the anvil and the pieces of wire, we will produce the raised embossed dot pattern of the Louis Braille system.

To my mind, the Hall Braille Writer is one of the most exciting and significant of the many nineteenth-century typewriters. It is a delight to use, with a nice touch, and whether the keys are struck singly or in chords, the system is impossible to jam. In the Hall Braille Writer, each wire hits a distinct point, whereas with conventional typewriters, each key hits at the same point, hence a propensity to jam. Hall’s machine successfully linked two important lines of history: the quest to find a mechanical means to allow the blind to write for the sighted, and the quest to allow the blind to write using a system that other blind people could read. Hall supplied the machine and Braille the system of writing.

Helen Keller used this machine, and extolled its virtues relative to a competing method called the New York Point System, which used eight dots instead of six. As she wrote, “in the great world of the blind New York Point is a provincialism. The machines for it are made only in New York, and write only New York Point. On the other hand, machines for Braille are made in Germany, France, England and America. I have owned American and German Braille writers which place me in communication with people all over the world.”

It was only in 1916 that schools for the blind in the United States officially adopted braille. Another 16 years passed before a universal English braille code was adopted. Let Helen Keller have the last word: “We the blind are as indebted to Louis Braille as mankind is to Gutenberg…Without a dot system, what a chaotic, inadequate affair our education would be.”

Text by Norman R. Ball, with typewriter photographs courtesy of Martin Howard. Other photographs from Wikimedia Commons. Norman and Martin are collaborating on a book on nineteenth-century typewriters.

* For more on the chequered history of the early years of the Braille system at the Institution, click here.

11 Responses to The Technology of Compassion