Lost (and found) in translation

Posted on September 2, 2012 by Parisian Fields

Among the pitfalls in learning French are what is known as “faux amis” (false friends) – that is, words that sound as if they ought to mean the same thing in English and French, but don’t. Like librairie, which is a bookstore, not a library. Or photographe, which is a photographer, not the camera image. Assister doesn’t mean to assist but to attend. Confection is garment making, not a bonbon. And so on.

However, if you have a sense of humour of a certain type, it is possible to exploit English-French confusions for a peculiar type of Franglais pun. 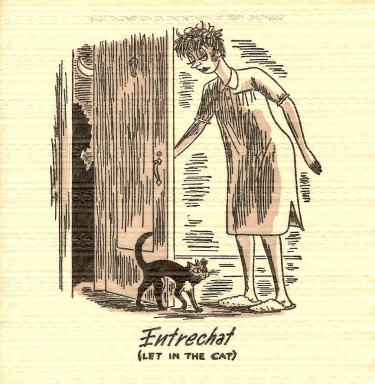 We found out about this when our friend Kim, a graphic designer and artist, snapped up a box of cocktail napkins at the Toronto Junction flea market (yes, we have flea markets in Toronto, too), labelled “Fractured French.” Each one shows a Franglais cartoon with a caption by Fred Pearson 2nd and an illustration by Richard Taylor.

The French captions sometimes require you to mispronounce the French words the way an English speaker might (so, for example, “S’il vous plaît” comes out like “silver plate”). Sometimes, you need a pronunciation somewhere between English and French (“Marseillaise” becomes “My mother says yes”). Sometimes the pun is not Franglais at all, but a joke involving two similarly pronounced French words and a certain amount of 1940s stereotyping (“Mal de mer” becomes a terrifying mother-in-law). 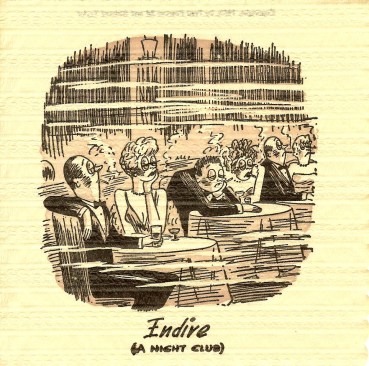 The illustrations are evocative of an upper-class postwar period. Dowagers in floral dresses and pearls; young women in strapless cocktail gowns. Men in tweeds or dinner jackets. Night clubs. Country houses. Seaside hotels. The Canadian-born Richard Taylor (1902–70) created many cartoons for the New Yorker, so the style and some of the characters may look familiar.

According to an article written in 1950,* Fred Pearson 2nd (1912–60) caught the French pun bug in the late 1930s. Soon he became known for his collection of puns and his friends started to volunteer their own ideas or jokes they had heard. In the late 1940s, Pearson and Taylor published a book of the illustrated jokes called Fractured French. It was so popular that they produced a sequel, called Compound Fractured French. Eventually, the collaboration expanded into merchandising. To this day on eBay you can find plates and ashtrays as well as cocktail napkins featuring the cartoons. 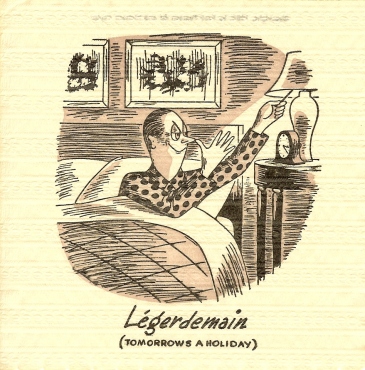 The original box of napkins that Kim found would have once had 36 different cartoons, but contained only 17 when she gave it to us. Mind you, that’s not bad for a set of throwaway items from the 1950s. I wonder how they survived all those years.

We have included a few of our favourites from this collection as illustrations. 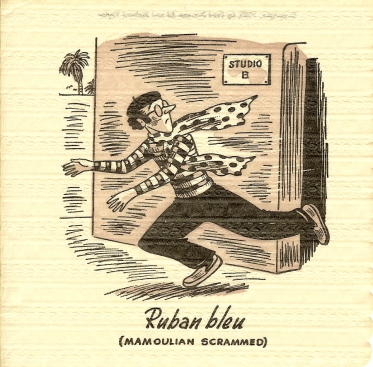 “Ruban bleu/Mamoulian scrammed” gave us pause, until we discovered that Rouben Mamoulian was a noted film director at the time.

Pearson died in 1960 and Taylor in 1970. The torch passed to a new generation of pun artists who enjoyed making French sound like English.

In 1967, a Hollywood actor called Luis d’Antin Van Rooten published Mots D’heures: Gousses, Rames. This was a different approach to transatlantic humour. If you say the French words aloud, they resolve themselves into familiar English expressions that sound like someone with a heavy French accent. The title eventually becomes “Mother Goose Rhymes” if you say it often enough.

Van Rooten’s forty French verses make a strange kind of sense (the title translates as “Words of the Hours: Pods, Oars”), helped along with creative punctuation and notes in the form of scholarly annotations. The book even comes with a complete (and bogus) provenance: Rooten claims it was found among the effects of an elderly relative – who had been a schoolteacher in Aix-en-Provence – and dates from the 18th century or earlier. 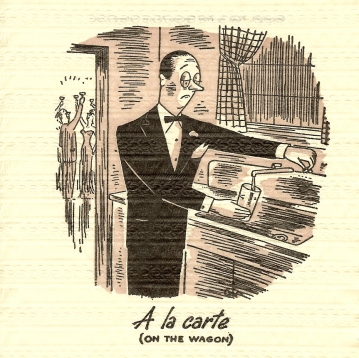 Any academic who sometimes finds traditional annotations and footnotes a little too precious at times will appreciate Rooten’s pseudo-scholarly comments on poems such as Un petit, d’un petit.

Say it ten times over. Eventually, it resolves itself into “Humpty Dumpty.” Rooten’s comment on the French text? “The inevitable result of a child marriage.” 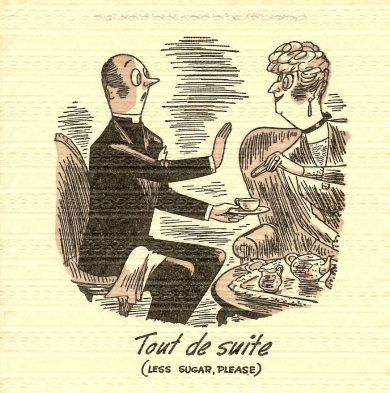 Van Rooten died in 1973, without producing a sequel. That task seems to have fallen to a writer called Ormonde de Kay, who had previously made a serious translation into French of Mother Goose verses. In 1980, he published a collection called N’Heures Souris Rames which is dedicated to Van Rooten. De Kay claims that these poems were given to him by a mysterious Hungarian and are of 16th-century origin.

Further, he asserts that the fact that the French verses sound like English rhymes when they are pronounced aloud can be traced to the likelihood that French Huguenot émigrés who fled the Wars of Religion would have sung them during their exile in England (at a time before nursery rhymes were common); the English enjoyed them without knowing their meaning, and turned them into English verses instead.

So, for example, when they heard the émigrés singing Hâte, carrosse bonzes, they heard “hot cross buns,” and the rest is history. Or history imagined by the fertile brain of Ormonde de Kay. Some of his contributions to this highly specialized genre include:

Norman says he finds it rather like deciphering certain vanity licence plates. Keep saying it until it makes sense. 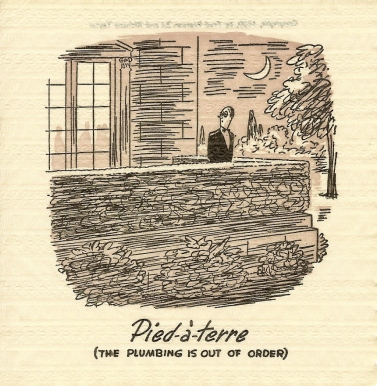 The technique is called homophonic translation. It takes a certain kind of mind and linguistic facility to pull this sort of thing off and a certain sense of humour to appreciate the results. You may not improve your conversational French with Un petit, d’un petit and the like, but you can impress non-French speakers with your accent. Of course, any real French person hearing you would think you had gone completely mad.

Parisian Fields is the blog of two Toronto writers who love Paris. When we can't be there, we can write about it. We're interested in everything from its history and architecture to its graffiti and street furniture. We welcome comments, suggestions, corrections, and musings from all readers.
View all posts by Parisian Fields →
This entry was posted in Paris popular culture and tagged Compound Fractured French, flea markets in toronto, Fractured French, Fred Pearson 2nd, homophonic translation, Luis d’Antin Van Rooten, Mots D’heures Gousses Rames, N’Heures Souris Rames, New Yorker, Ormonde de Kay, Richard Taylor, Rouben Mamoulian. Bookmark the permalink.

9 Responses to Lost (and found) in translation