One address, many stories

“What’s that building with the dome, there, on the right?” Norman pointed to a building shown in a stereographic photograph of the Champs-Elysées he had recently bought at an antique photo show. The photo had been taken from the top of the Arc de Triomphe. I had no idea. Which means, of course, that I had to find out.

From the look of the early automobiles and horse carriages, the photo was taken some time before the First World War. The location was on the south side of the avenue, just beyond the row of buildings that fill the space between the Place de l’Etoile and the rue de Presbourg (which follows a concentric course around the Place). This is where Publicis is now, so the address would be 133 avenue des Champs-Elysées. It should be possible to identify.

But wait (I hear some of you say), what is Publicis? Ah, that is an interesting story in itself. Publicis started out as a fairly modest French advertising agency and is now a huge holding company for advertising agencies around the world. Its headquarters on the Champs-Elysées close to the Arc de Triomphe incorporates the convenience-store-to-end-all-convenience-stores, with a shop selling newspapers and magazines, a separate bookshop, a pharmacie, an épicerie that sells everything from bottled water to fresh macaroons, a restaurant, a bar, a gift shop, and other boutiques selling makeup, cigars, wine… you name it, all open until 2 in the morning. It is called the Publicis Drugstore.

Marcel Bleustein-Blanchet, who founded the Publicis agency in 1926 on the Faubourg Montmartre, opened the original Drugstore on the Champs-Elysées in 1958, cashing in on the craze for all things American. It became a hangout for youth at the height of Beatlemania. It was even mentioned in a song by Serge Gainsbourg called Les Sucettes (The Lollipops/The Suckers – the song includes several double-entendres).

But in 1972, the place burned down. The photograph from the Roger-Viollet collection shows that it was completely gutted. It also shows that what burned had originally been quite ornate. 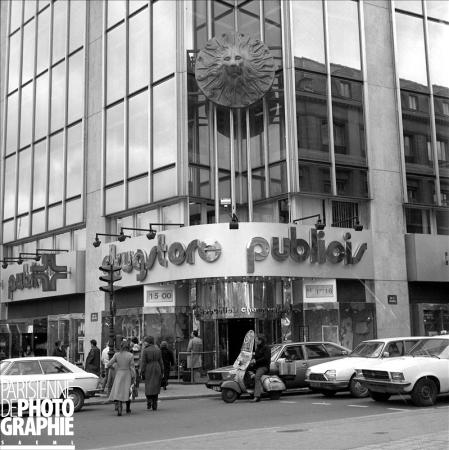 It was transformed once again in 2003 by architect Michele Saee, with glass and swooping metal lines on the exterior, curvy and shiny in a very 21st century way. Here is a Google Street View image, taken from the side away from the Champs-Elysées.

But I still haven’t answered the original question: what was there before? It turns out it was the Hotel Astoria (which continues in Paris at a different address*). I found this information on French Wikipedia, which has a helpful list of all the current and former buildings on the Champs-Elysées.

The French Wikipedia contributor notes that it was built in 1907 and that Félix de Rochegude, author of Promenades dans toutes les rues de Paris: VIIIe arrondissement (Hachette, 1910), had this to say about it: « l’élévation exagérée et agressive de cet hôtel détruit la belle harmonie de la place de l’Étoile. » (The exaggerated and aggressive elevation of this hotel destroys the beautiful harmony of the place de l’Etoile.)

Hm. Too big. Too much. Where had I heard that before? In an earlier blog, I had written about the over-the-top department store of Georges Dufayel, designed by Gustave Rives. Rives specialized in extreme ostentation. He had even created a house for Dufayel that was so grand that its owner (who was no shrinking violet) couldn’t live in it and inhabited a smaller building in the courtyard.

Well, guess who designed the Astoria? None other than good old Gustave. You want domes? How about two? Sculpture on the façade? Bien sûr. Loggias? Terraces? Elaborate balconies? Pile ’em on. Nothing suited Rives quite like excess. Here’s what it looked like in its heyday (this is the same perspective as the Google Street View version).

In 1910, the Scientific American Handbook of Travel (no, I hadn’t heard of this before, but I found it on Google Books) described the hotel in a terse entry: “Up to date. Unique position. High-class restaurant. Celebrated orchestra.”

The only problem was the timing. The Hotel Astoria had only a few years of regular operation before the First World War made high-class restaurants and celebrated orchestras unimaginable luxuries. The hotel became a hospital. It was an unusual one, though – a Japanese military hospital, staffed by Japanese doctors and nurses and equipped entirely by Japanese manufacturers of medical equipment. Apparently the Japanese decided not to fight in the First World War, but supported the Allies by sending medical teams to free up British and French resources for the war effort. The Roger-Viollet archival photo collection was my first clue to this fascinating but obscure piece of history. 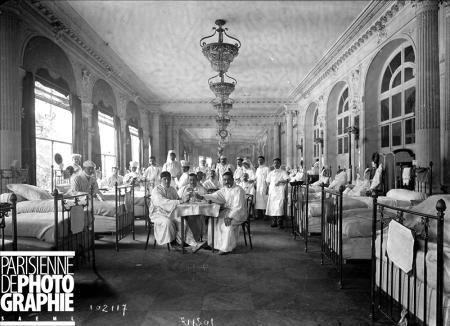 Shortly after the war, the hotel was pressed into service during the peace conference of 1919.

Margaret Macmillan, in Paris 1919: Six Months that Changed the World, says it took five hotels to accommodate the 400 officials, advisors, and clerical assistants in the British Empire delegation. The centre of British activity was the Hotel Majestic** on the Avenue Kléber, and the Brits went to the trouble of replacing all the French staff there with English hotel workers. Macmillan writes:

The food [at the Majestic] became that of a respectable railway hotel: porridge and eggs and bacon in the mornings, lots of meat and vegetables at lunch and dinner and bad coffee all day. The sacrifice was pointless, [Harold] Nicolson and his colleagues grumbled, because all their offices, full of confidential papers, were in the Hotel Astoria, where the staff was still French.

After this brief appearance in world history, the Hotel Astoria seems to drop out of sight. My 1927 copy of Muirhead’s Paris and its Environs (found at a secondhand store in Canada) does not mention it at all. I wonder why.

Perhaps it had become more office-like than hotel-like. Nonetheless, it was used by the Germans during the Second World War – along with many other luxury hotels. After the war, Dwight Eisenhower used it as his headquarters in the early days of the North Atlantic Treaty Organization (NATO). Publicis took it over in the 1950s, and what burned in 1972 was the original hotel building that the advertising agency had used for more than 20 years.

That brings the story up to date. But while doing the research, I found out that before it was the Hotel Astoria, 133 avenue des Champs-Elysées was the address of a noble family, the kind in which everyone has about a dozen names. For example, in the 1870s, the owner was Olivier Emmanuel Auguste Louis Nompar de Caumont La Force, who married Blanche Aimée Elisabeth Jeanne de Maillé de la Tour Landry. There is probably a story behind all those names. One day I will find out who they were and what their house looked like, back when the Champ-Elysées still looked bucolic.

So many stories, so little time.

* It’s a Best Western hotel on the rue de Moscou.

**The Majestic Building has been used as offices in recent years, but it is due to return to its former glory as the Peninsula Hotel in 2013.

Parisian Fields is the blog of two Toronto writers who love Paris. When we can't be there, we can write about it. We're interested in everything from its history and architecture to its graffiti and street furniture. We welcome comments, suggestions, corrections, and musings from all readers.
View all posts by Parisian Fields →
This entry was posted in Paris history, Paris hospitals, Paris hotels, Paris streets and tagged Champs Elysees, Félix de Rochegude, Georges Dufayel, Gustave Rives, Hotel Astoria, Japanese Hospital in Paris, Marcel Bleustein-Blanchet, Place de l'Etoile, Publicis, Scientific American Handbook of Travel. Bookmark the permalink.

14 Responses to One address, many stories