Tracing the tracks of Paris chimneys

Posted on September 25, 2011 by Parisian Fields

As we walk past the restaurant Monsieur Lapin on the rue Raymond Losserand in the 14th, my eyes are drawn upwards to a ladder of iron steps embedded in the wall. We are looking at the other half of a story I started two weeks ago, when I wrote about Paris chimneypots. Stories like this help us “read” Paris through traces of the past on the walls and streets of today. 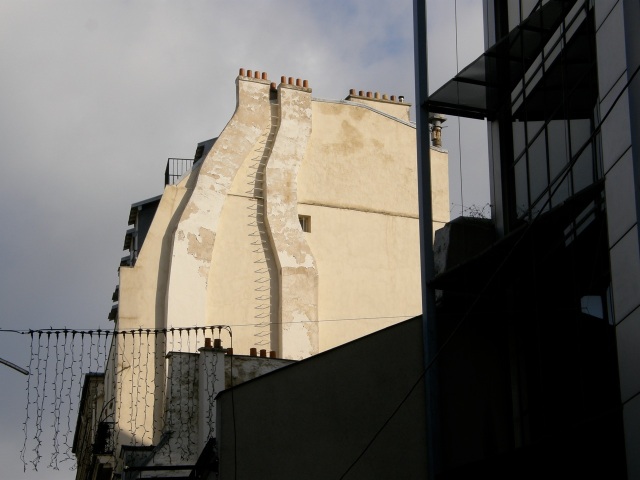 The building appears to be in fine shape, and the stone or brick of both wall and chimneys are carefully plastered over. Each chimney appears to have four fired clay flues, each leading to a chimneypot.

Chimneys should allow a free upward flow of air, so the fumes (including deadly carbon monoxide) can be dispersed in the outside air. Whether old or new, chimneys need to be cleaned. The ladder embedded in the wall allows chimneysweeps to climb to the top and then drop the linked brushes they use to clean accumulated soot and debris from the flues. 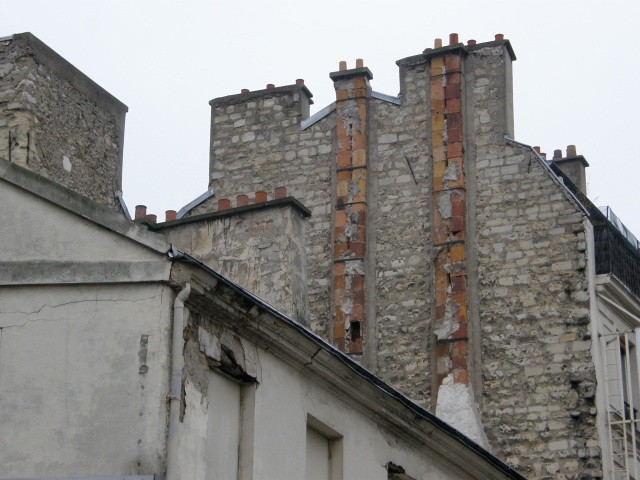 Here it is not just the chimney that is undressed. The stone wall looks coarse and crudely made. This type of stonework is often called rubble stone and normally, once a building was finished, this type of wall would not be seen. It is a thick barrier intended to prevent the spread of fire. Most likely another building abutted this firewall. However, the other building has been taken down, exposing the coarse stonework and two sets of chimney flues.

Each set consists of two parallel flues made of fired clay tiles. Each set is topped by two chimney pots. The flues are exposed to the elements and broken in places. Clearly these are not working flues, but they show the path once taken by smoke from a fireplace. The chimneypots for which we see no flues are probably for working fireplaces, stoves, or boilers.

Once one knows what to look for, one finds that Paris is filled with exposed chimney tracks. In the photo below, at first glance it appears two exposed flues once converged into one and climbed to the roofline.

However, when the telephoto lens moves in more closely, one can see three flues, since there are at least two chimney flues merged into one near the front of the building. The building they once served is no more, but the tracks are there to tell—or at least hint at—the tale. 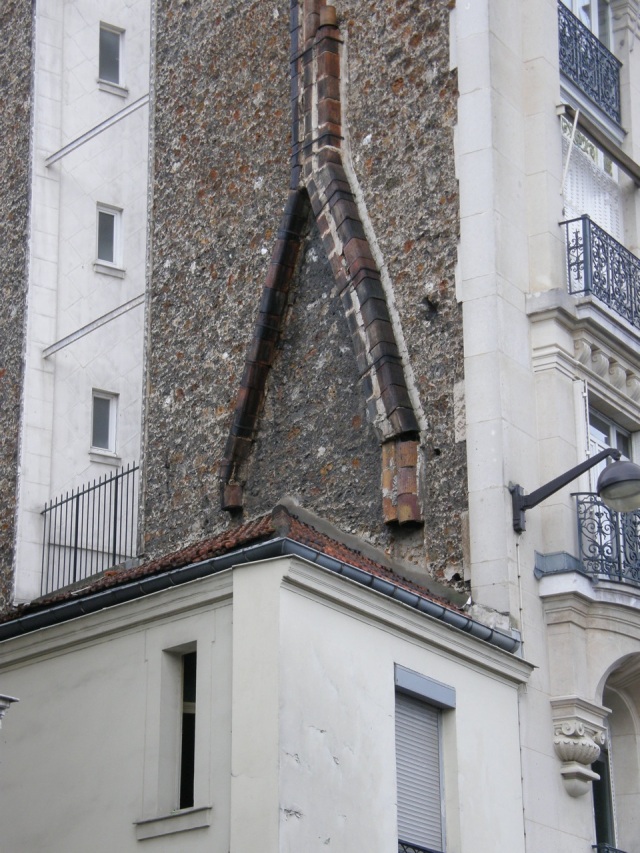 Working chimneys on end walls or firewalls need not look unpolished or unfinished. Here the flues are flush with an attractively finished brick wall. Moreover, it looks as if there are no gaps in the flues; they represent a complete system safely drawing smoke and fumes from at least four sources. 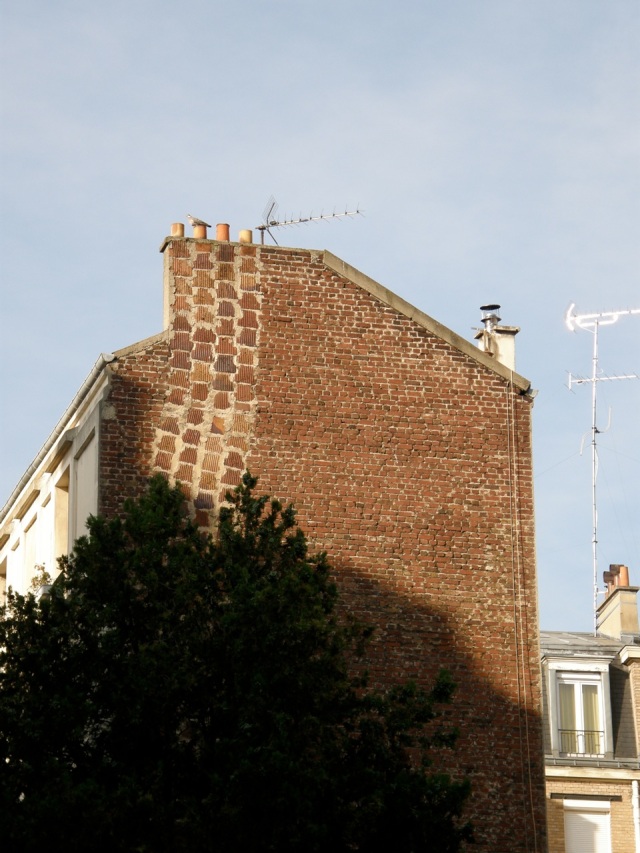 In the photo below, we see the brick cladding over three flues near the front of the building. This chimney has only one exposed side. Perhaps the lower building was originally intended to rise to the height of its taller attached neighbour, or perhaps the taller building was once lower, and a few storeys were added on later. However, no matter where they come from, chimneys must rise above the roof line of any attached building. That explains the sturdy chimney rising from the lower building to the top of the taller building. Chimneys must be taller than the adjacent buildings or downward-flowing winds will force the smoke back down the chimney—much to the chagrin of those near the fire, which then “draws poorly,” as they say. 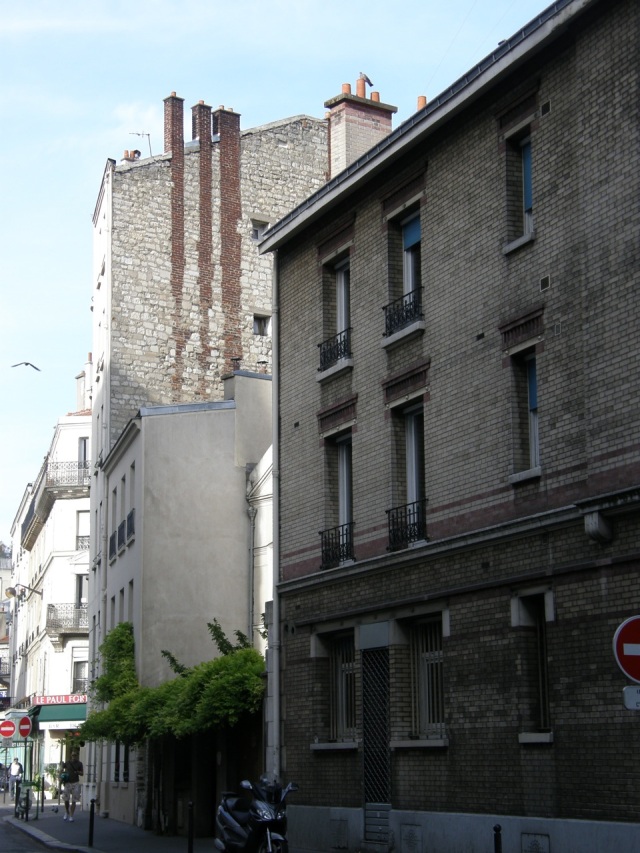 Below, we see a more modern version of how to get the chimney top from a lower building up to the height of a taller one. 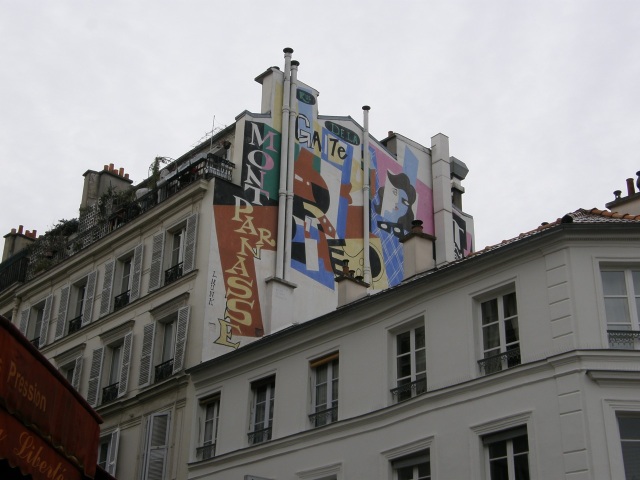 Once one starts looking for chimney tracks, one sees interesting versions everywhere in Paris. This is what I found one morning as I stuck my head out of the skylight over the sleeping loft of a flat on the rue de Gergovie. 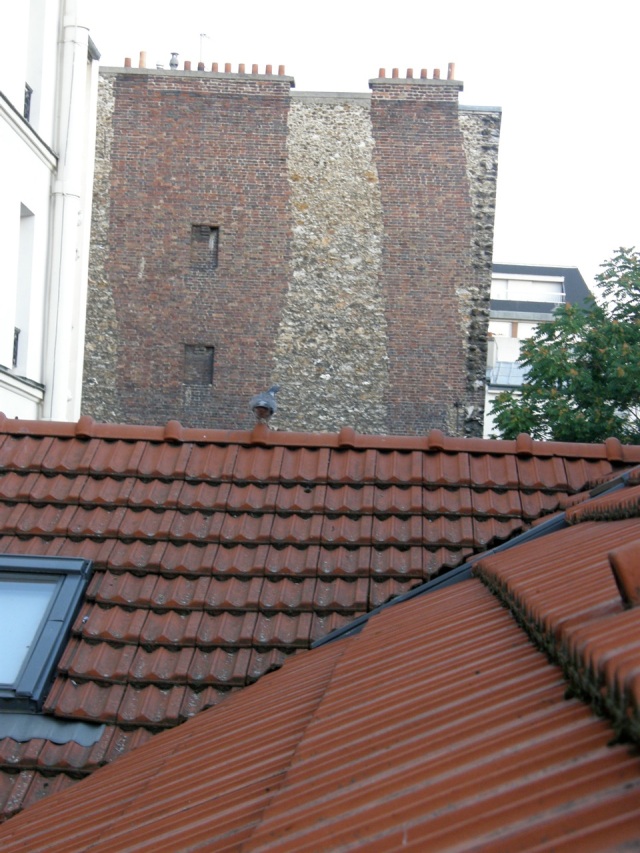 Or this one, not far away on the rue de la Sablière, where it is clear that a building has been taken down, leaving a wedge-shaped house that is too narrow even to call a flat-iron building. 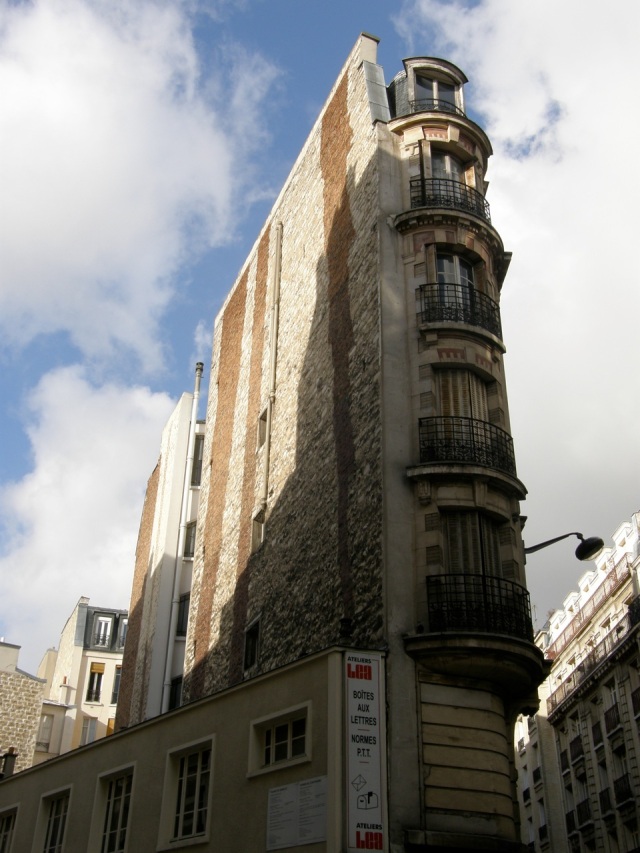 Of all the chimney tracks I have photographed, the next one is my favourite. I call it the “swamp creature.” 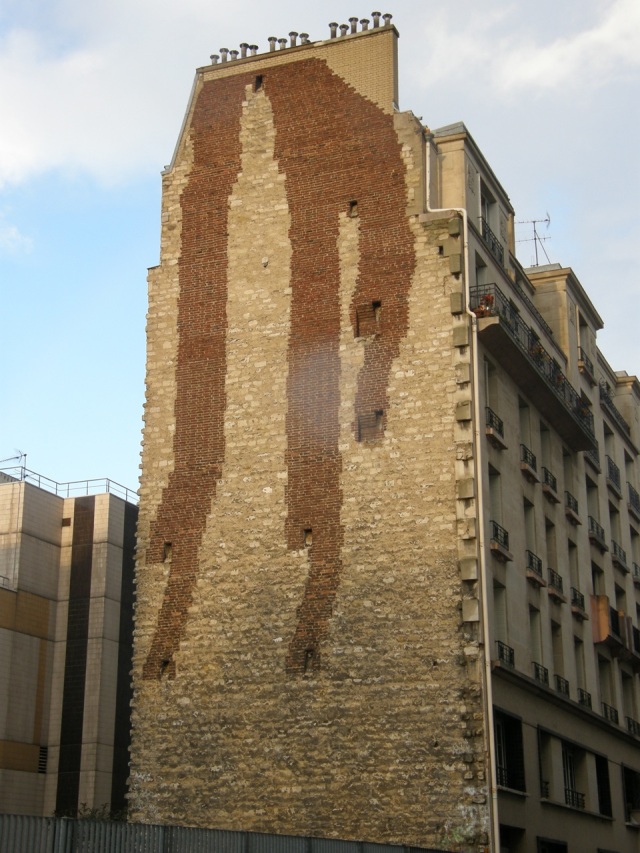 Doesn’t this weird shape suggest a B-movie monster climbing the side of the house? However you wish to imagine it, this too is a set of chimney tracks. And the pattern reveals its function when we know how to read it.

The coarse exposed stonework suggests an earlier wall. When we zoom in more closely, we can see some important details. 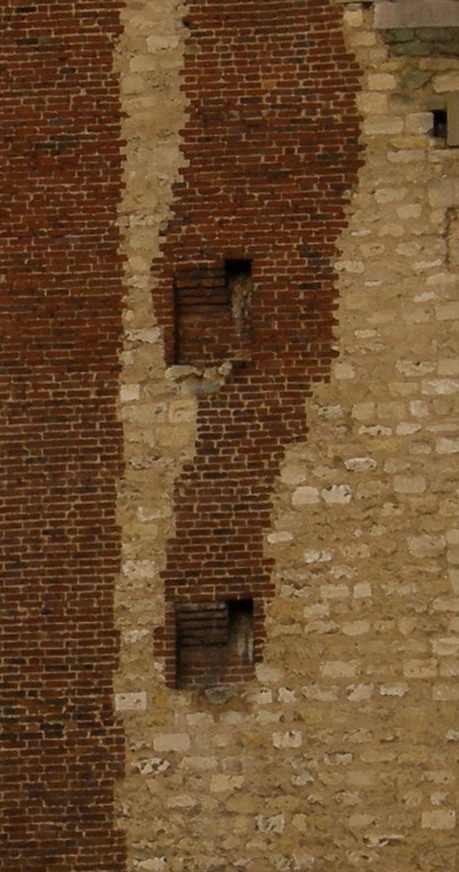 Note the two openings, each of which marks the point at which a chimney flue started its upwards journey to a chimneypot. While the brick hiding the flues and the stonework are flush with the rest of the wall, there are recesses going in further; we can see how the brickwork is stepped in. Beside these insets, we see openings where smoke could go up, or where the brushes of the chimney sweep could be drawn up and down to dislodge the collected soot, lest the flues and chimney become plugged.

And what is so bad about a plugged chimney? Émile Zola can’t talk to us about that subject. He died prematurely from carbon monoxide poisoning resulting from a blocked chimney in his Paris apartment. Some say it was an accident. Others say the chimney was blocked intentionally, a revenge murder for his leading role in exposing the institutional prejudices behind the Dreyfus affair that led to the exoneration of a wronged man. Zola too was deeply wronged for his courage and years later, he died from a blocked chimney. Murder? Negligence? Opinion is divided. But whatever you choose, don’t overlook the importance of chimney flues. Admire the chimney tops and scrutinize the flues.

Text and photographs by Norman Ball.

Parisian Fields is the blog of two Toronto writers who love Paris. When we can't be there, we can write about it. We're interested in everything from its history and architecture to its graffiti and street furniture. We welcome comments, suggestions, corrections, and musings from all readers.
View all posts by Parisian Fields →
This entry was posted in Paris history, Paris streets and tagged Émile Zola, carbon monoxide poisoning, chimney tracks, chimneypots, flues, Monsieur Lapin, Rue de Gergovie, rue Raymond Losserand. Bookmark the permalink.

6 Responses to Tracing the tracks of Paris chimneys