Bringing home a taste of Paris

Remember that old grade-school assignment, “What did you do on your summer vacation?” The mind tends to go blank. Similarly, when the customs officer at the airport us, “What did you buy in Paris?” our minds go blank. What did we buy?

Some of the other people on the flight home from Paris have clearly been shopping at the souvenir stores, and sport bags and scarves and headgear with images of the Eiffel Tower. There is, apparently, nothing on earth that cannot have the image of the Eiffel Tower printed on it somewhere. The souvenir shops on the rue de Rivoli are bursting with all manner of keychains and stuffed toys and salt-and-pepper shakers emblazoned with the image.

And on the steps of the Palais de Chaillot, men carry armloads of little Eiffel Towers in varying sizes and colours or spread them out on blankets on the ground.

What do we bring back? Well, the full story would take several blogs, but one thing that comes to mind immediately is kitchen implements and food.

For one thing, we always end up adding to the “batterie de cuisine” that we take with us. Future apartment renters, please note: if you are planning to do your own cooking in Paris, you should know that French kitchens may not have all the things you rely on at home. So we always bring a Pyrex measuring cup (yes, really), a silicon spatula, an apron (don’t laugh), and a couple of very sharp knives (in our checked luggage, of course). And still we find we need something more. This time, we had to buy a pair of oven mitts after Philippa burned her hand taking something out of the oven with only a folded towel for protection. Something to remember for next time.

We also found that there was no can opener in the kitchen either, probably since most French cans have a pull tab and can be opened without one. But not all French cans. We bought a can that didn’t have a tab and had to improvise with a sort of bottle opener. Rather a mess, but we managed in the end. Next time, we’ll pack a can opener, too.

Here’s a view of the kitchen in the apartment we rented this time. It was a bit dark with all that wood, but very modern and functional. Philippa is wearing her apron from BHV, which she takes with her every time. 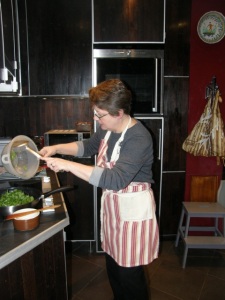 We also tend to return with a few more reusable shopping bags to add to our growing collection (these also make easy-to-pack and useful gifts) We have two sturdy ones from Bon Marché that we have used for years, as well as a special bag for carrying wine bottles that we found at Nicolas, the wine merchant (there are Nicolas shops all over the city). And when we bought gifts at a wonderful shop on the rue du Bac called Les Toiles du Soleil, they gave us a delightful striped bag to carry our purchases home.

We also buy favourite foods nearly every time we visit. For example, in a previous blog, we mentioned Poivre Saveur, which we cannot get in Canada. So we buy several little grinders, use one while we are there for our dinners in the apartment, and bring the rest home.

We sometimes buy vinaigre de Banyuls (which we rarely see in stores here). And this time we found a container of real cinnamon, after we had read that most of what is sold by that name in North America is actually cassia. The Grande Epicerie in the Bon Marché store had the real thing from Sri Lanka, which has a subtly different smell and flavour compared with cassia.

We are endlessly fascinated by the range of flavours available in Paris food shops. Coming from a country in which in most average shops, you can get any flavour of jam you like as long as it is strawberry, the offerings in even the most mundane grocery stores are a revelation. On our first day, we bought fig-and-violet jam (Bonne Maman), which we had for breakfast each day we were there. Sheer heaven, slathered on a baguette.

Sure, we love the patisseries and indulge from time to time… 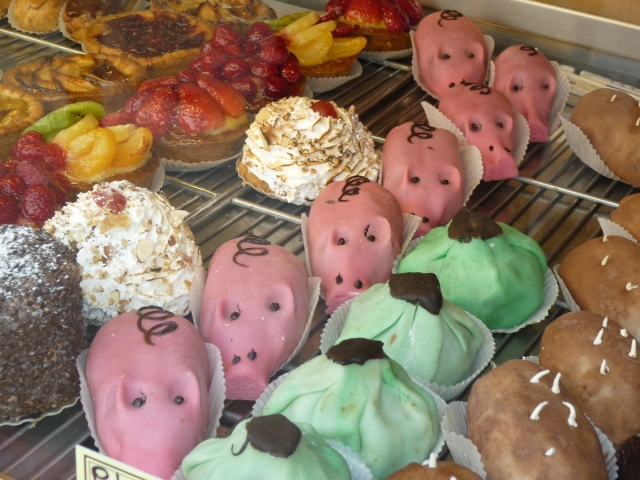 … but there are hundreds of unexpected delights in every Monoprix store.

Sometimes, we get a little overenthusiastic and buy something to bring home just because it seems so wildly exotic. Rose petal and star fruit jam, anyone? (That was a previous visit.)

Come to think of it, we have a tendency to bring home unusual eatables from all kinds of places. There was the molé mustard we found in Colorado. And the cranberry horseradish sauce from Wisconsin. The pear vinegar from Michigan was one of our more successful finds, and we still buy it online and use it in summer salads. But the blueberry-anise chutney from…where did we buy that?… was definitely a one-off.

The other day, we were talking about how someone should write a cookbook for people who own exotic condiments they don’t know how to use. Ten uses for that zucchini-wasabi relish someone brought to your summer barbeque. Five things you can do with tangerine-coriander ketchup or key lime and rhubarb chutney.

Just to get the ball rolling, here are a couple of ideas. Norman puts interesting ingredients into marinades for barbeques and stir-fries and we have found that adding a dash of something unusual perks up a plain vinaigrette. Mind you, this is not something a French cook would do, since in France, vinaigrette is vinaigrette and you don’t mess with it, but we don’t mind a dash of a slightly fruity flavour or a touch of unusual mustard with our salad dressing.

And when all else fails, we have a foolproof standby: a recipe for pork tenderloin that can take whatever you throw at it. Pork goes well with either fruity or piquant flavours, and this recipe allows all kinds of flavours to blend. So for all of you who received strange condiments in your Christmas stockings, here is a way to make use of them.

1 tbsp. olive oil
1 lb. pork tenderloin
1 cup white wine
1 to 3 tbsp of “whatever” (mustard, chutney, jam, relish, ketchup – 1 tbsp for stronger flavours and up to 3 tbsp for milder ones)
Salt and pepper to taste

In a Dutch oven, heat the olive oil and add the pork tenderloin. Sauté, turning frequently, until browned all over, about 5 minutes. Add the wine, the “whatever” and the salt and pepper. Simmer at medium-low heat for 15 to 20 minutes. Add water or more wine if the mixture reduces too much. Remove the pork tenderloin from the pot, cut into medallions and return to the pot for a final 5 minutes, turning to saturate both sides with the sauce. Serves 3 or 4 people, depending on what else you are having with it.

Better than any souvenir from a souvenir stall. Bon appetit!

Parisian Fields is the blog of two Toronto writers who love Paris. When we can't be there, we can write about it. We're interested in everything from its history and architecture to its graffiti and street furniture. We welcome comments, suggestions, corrections, and musings from all readers.
View all posts by Parisian Fields →
This entry was posted in Paris food and tagged Bon Marche, Bonne Maman, Ducros poivre saveur, Les Toiles du Soleil, Monoprix, pork tenderloin, Pyrex measuring cup, Souvenirs of Paris. Bookmark the permalink.

4 Responses to Bringing home a taste of Paris