Posted on December 3, 2010 by Parisian Fields

The pile of CDs beside the CD player is threatening to topple. No, we aren’t iPod people with everything neatly packaged in a little white contraption – at least not yet. We have CDs and we listen to the radio, and we like to make new discoveries. Some of the things we like may not even be available on iTunes. But if they were… here is a little playlist of a few of our French favourites, illustrated with some of Norman’s pictures of Paris street musicians in flesh and stone (the one below from the Parc Monceau amuses us, as it seems that the woman is getting a migraine from listening to the pianist).

We’d start with the delicious slow second movement of the Piano Concerto in G major, by Maurice Ravel. performed by Martha Argerich with the London Symphony Orchestra. This piece was the subject of our very first post on “Parisian Fields” in July 2010. You can hear it on YouTube – we recommend putting on headphones and closing your eyes and letting your mind drift with the music.

In order not to break the mood, this could be followed by “La Javanaise” by Serge Gainsbourg. We like the version sung by American singer Madeleine Peyroux. Old-fashioned, a little dreamy, in slow waltz time. “Ne vous deplaise, en dansant la Javanaise.” For a different take, you can see Gainsbourg himself perform it on YouTube, whispering rather than singing, complete with drags on a cigarette, but we think Peyroux’s interpretation does more for the melody, and the accompaniment is less tinny.

If we were to choose a Gainsbourg sung by Gainsbourg on our playlist, we’d go for “Marilou sous la neige.” It pokes a little fun at the French obsession with bandes dessinées (cartoons), and there are some clever jeux de mots about copyright and “tous droits de réproduction interdits.” (The YouTube version begins with a strange visual of a speeded-up 1950s cocktail party.)

Maybe it’s tactless of us, but we’re going to follow up with a song by Jane Birkin, who was Gainsbourg’s lover back in the day (they recorded the notorious “Je t’aime…moi non plus” together in 1969). Norman heard this song, “Madame,” on the radio some months ago and immediately went and bought her album Enfants d’hiver. One of the things we like about this reflective song about getting older (the singer is surprised to be addressed as “Madame” instead of “Mademoiselle”), is the odd way in which the words and music fit together. The phrasing of the music has nothing to do with the phrasing of the words. But together they sound just right. You can listen to it here and see some nice old-fashioned photographs of Paris.

Next up, a song by Thomas Fersen called “Café de la Paix.” An oddly jaunty little song about a man down on his luck (he lives in a cardboard box under Pont Marie), waiting for a former lover in a café. We heard this on a CD given to us for Christmas last year by Norman’s daughter – one of those compilations made by Putumayo called simply Paris. This particular song was originally released in 1995 on an album called Les Ronds de Carottes. Have a listen here.

What next? Well, it isn’t Parisian, but we’re going to throw a Quebecois song and singer into the mix, because we had to go all the way to France to discover her. Our friend Marie, who lives in Normandy, gave us a CD of Lynda Lemay’s – she was shocked that we had never heard of her. Her album, Les Lettres Rouges is a delight. We’ve chosen “L’Enfant au cheveux gris.” At the end of the song, Lemay sings a fragment of an exuberant 1937 French song by Charles Trenet: “Y a d’la joie.” Listen to it here.

And while we’re thinking about Marie… years ago, when Philippa was attending university in France, Marie played her a funny little song about that quintessential French institution: dictée. Singer-songwriter Michel Fugain wrote a little ditty on the subject in 1975, complete with articulated punctuation (virgule, point, point final). The YouTube version has photos of a stern teacher wearing those grey-blue coats (sort of like lab coats) that French instructors used to wear. 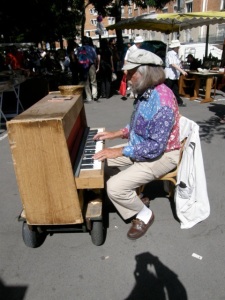 We’ll round out this short playlist with another instrumental. Here’s one that we found, of all places, on the website of the Hotel Bristol. We liked it so much that we actually e-mailed the hotel, asking for the name of the composer. The music is called “La grande ourse” (the great she-bear) and it’s by Nicholas Errèra. The original version was written for the 2002 movie Le Papillon, and the composer made a special arrangement of it for the hotel’s website.

While we’re on the subject, several other big Paris hotels use music on their websites. In most cases, it is just vague electronic harmonies or a endlessly repeated riff, which is why the Hotel Bristol music, which is a fully realized piece, stands out. The Hotel Raphael (once Audrey Hepburn’s home-away-from-home) has a slightly sinister theme. As the music plays and the website pans across the various features of the hotel (lobby, dining room, guest suites, bathrooms), I almost expected to see something odd appear, like a spy with a gun lurking behind a pillar or a body in the bathtub.

Some choices are predictable: the Ritz, of course, uses Irving Berlin’s “Putting on the Ritz” in its opening video. Some are not. The Hotel Square, for some reason, has chosen “Life is just a slow train crawling up a hill.” What on earth is that supposed to indicate?

The Hotel Fouquet’s Barrière has a variety of themes in its opening video, ranging from “Unforgettable,” an understandable choice, to “Smile While Your Heart is Breaking,” a perplexing one.

[Later note: The hotel websites have all been altered since this blog was written and now very few use music.] 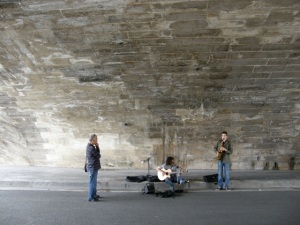 If you have some favourite French music to add to this playlist, please send in your comments and suggestions. We love to learn about new songs, singers, musicians, and composers.

Parisian Fields is the blog of two Toronto writers who love Paris. When we can't be there, we can write about it. We're interested in everything from its history and architecture to its graffiti and street furniture. We welcome comments, suggestions, corrections, and musings from all readers.
View all posts by Parisian Fields →
This entry was posted in Paris music and tagged Hotel Bristol, Hotel Fouquet's Barriere, Hotel Raphael, Hotel Ritz, Hotel Square, Irving Berling, Jane Birkin, Le Papillon, Lynda Lemay, Madeleine Peyroux, Martha Argerich, Maurice Ravel, Michel Fugain, Nicolas Errera, Putumayo, Serge Gainsbourg, Thomas Fersen. Bookmark the permalink.

3 Responses to The Parisian Fields playlist