The past is ever-present in Paris, and so are the dead. I don’t know of another city in which so many of the top tourist sites are in some way memorials to those who have gone before. There is the Pantheon, with its Great Men (and two Great Women), and Les Invalides, with Napoleon in his marble bathtub, surrounded by the tombs of his family members and military commanders. 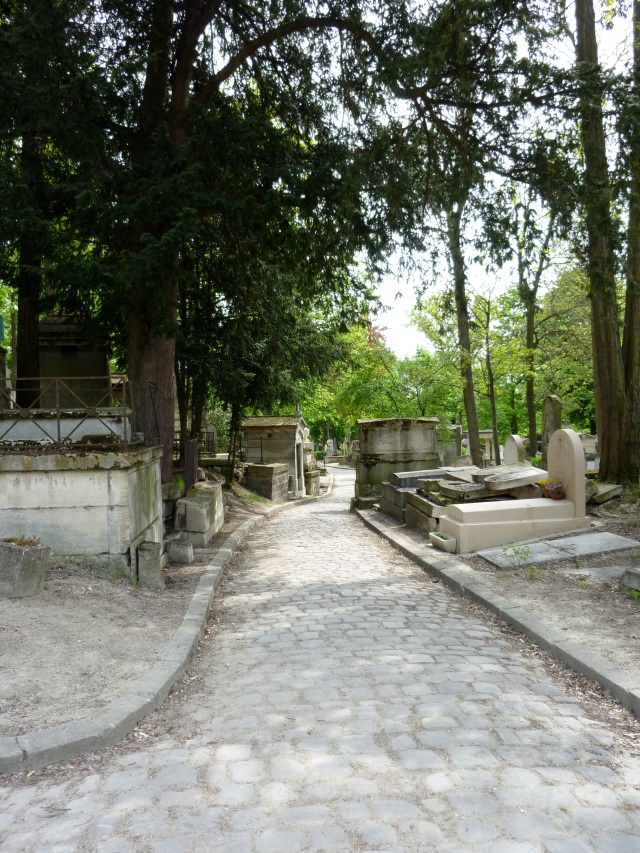 The city’s cemeteries are big tourist draws. Père Lachaise, shown in the photograph, is the biggest (both in acreage and in tourist numbers – what is it about the desire to see Jim Morrison’s grave, anyway?), but the cemeteries of Montparnasse, Montmartre, Passy, and Picpus, along with assorted smaller graveyards, attract many visitors who come to see the resting place of celebrities and historical figures.

And for sheer ghoulish weirdness, there are the Catacombs, where the bones of those buried in the city’s central cemeteries were moved in the late 18th century, and artfully arranged in a former underground quarry.

Mind you, just over a hundred years ago, the Catacombs would have come a distant second in the sheer ghoulish weirdness category to the Paris Morgue, the must-see tourist site for all fashionable visitors. This was the place to see and be seen, but mostly to see. In fact, the word Morgue comes from an obsolete French verb “morguer” – to stare fixedly. (The term today has a somewhat different meaning.)

The original idea was to make it possible for people from the city to view unidentified bodies found in the streets or fished from the Seine in order to identify and claim them. But when you read about tens of thousands of people filing past an especially interesting display (children were a top draw), it is clear that the original purpose was left behind. It was free. And it was fascinating.

The first proper morgue, shown above in an etching by Charles Meryon, was built in 1804 on the Quai du Marché on the Ile de la Cité. In 1864, Haussmann ordered the demolition of this morgue and the creation of a much larger building on the Quai de l’Archevêché behind Nôtre Dame, on what is today the site of the Memorial of the Deportation. The photograph below shows this newer building; it’s the long, low building to the left of the bridge.

Inside the building was a viewing room, with huge windows like the windows of the grands magasins. Behind the glass, the dead were laid out naked on two rows of six slabs each. A cloth hid the private parts, and the clothing was hung nearby. Small children were propped up on chairs. The window had a curtain that could be drawn across when the attendants added or removed a body. When the stage was ready – and it was very much like a stage – the curtains were drawn back to reveal the new display.

Women and children drew enormous crowds, along with those who were believed to be the victims of foul play. One female murder victim attracted about 10,000 visitors a day. Another popular event occurred whenever the police brought a murder suspect to “confront” a supposed victim in an effort to force a confession or an expression of guilt.

The morgue was featured on tours organized by Thomas Cook, and mentioned in tourist guides to the city. But its greatest publicity came from press reports about the latest inhabitants of the place. Papers such as Le Journal Illustré often featured photos of some of the more interesting bodies.

One odd story attached to the morgue was that of l’Inconnue de la Seine. In the 1880s, a young woman was pulled from the Seine; she had drowned, but there was nothing to indicate whether she had fallen into the river, jumped, or been pushed. She had attractive features and the hint of a smile on her face. The pathologist at the morgue found her face so interesting that he had a plaster cast made of it.

The cast was copied, and copied again. Further versions were made from photographs of the original cast. These death masks became bestsellers – many artists and writers owned copies. And many of the owners wrote stories and plays about her, offering up varying versions of what might have happened to her before she went into the river.

The original young woman was never identified, but she was nonetheless famous. The photograph of the mask shown here is by Man Ray. Years later, in the 1950s, when some of the first lifelike resuscitation models were created to teach the skills of artificial respiration, her famous, lifeless face was used on these models, known as “Rescue Annie” or “CPR Annie.”

The public morgue closed in 1907. This move caused an outcry among the various vendors who hawked their wares near the building and prompted a petition from 40 nearby merchants, whose businesses declined sharply when the Quai de l’Archevêché lost its major attraction. After 1907, only people who had strong reason to believe they could identify a corpse were admitted.

Today, the same function is carried out in the Institut médico-légal on the Quai de la Rapée in the 12th arrondissement. The tour buses do not stop there.

Text and photograph of Pere Lachaise by Philippa Campsie

Parisian Fields is the blog of two Toronto writers who love Paris. When we can't be there, we can write about it. We're interested in everything from its history and architecture to its graffiti and street furniture. We welcome comments, suggestions, corrections, and musings from all readers.
View all posts by Parisian Fields →
This entry was posted in Paris history, Paris popular culture and tagged Charles Meryon, CPR Annie, Haussmann, Institut médico-légal, L'Inconnue de la Seine, La Morgue, Le Journal Illustre, Les Invalides, Man Ray, Paris Catacombs, Paris cemeteries, Pere Lachaise Cemetery, Quai de l'Archevêché, Rescue Annie, Thomas Cook. Bookmark the permalink.