Wherever we go in Paris, we see signs exhorting us to respect the environment, on garbage containers or in shops.  The sign in the photograph below (look carefully) says, “L’environnement au coeur de nos priorités” (the environment is at the heart of our priorities). I want to believe that they mean what they say.

As in Toronto, city officials and residents in Paris are increasing their efforts to reduce the amount of waste generated, and divert more and more of what is thrown away to reuse and recycling.

Of course, there is one significant difference between Paris and Toronto. Parisians incinerate their unrecyclable garbage in Issy-les-Moulineaux; Torontonians put theirs into a landfill near London, Ontario. In Toronto we know that every plastic toothbrush we have ever owned and thrown out is Still Out There Somewhere, which is a disquieting thought. Moreover, we know that not everything sent for recycling is actually recycled, and that not everything diverted from the waste stream is, in fact, diverted.

So the ubiquitous signs made me wonder about how Paris stands in relation to the 3Rs – reduce, reuse, and recycle.

Certainly, the city is good at reusing urban spaces, such as the Viaduc des Arts in the 12th arrondissement that was once a railway line and is now a collection of studios and boutiques under the arches with a promenade plantée on top. More recently, the city has found new uses for the old Petite Ceinture – the belt-line railway that closed in the 1930s. The bits of the line that are open to the sky have been made accessible to joggers and dog walkers after many years of neglect.

Reuse on a smaller scale is also encouraged. On a previous summer visit, we wandered into the courtyard of the Institut Protestant de Théologie, in which artists were invited to give new life to used materials. A heap of reusable items was spread out on the ground in the college courtyard for artists to choose from. The results were certainly fun to look at, although it was really more about creativity than about environmental responsibility. 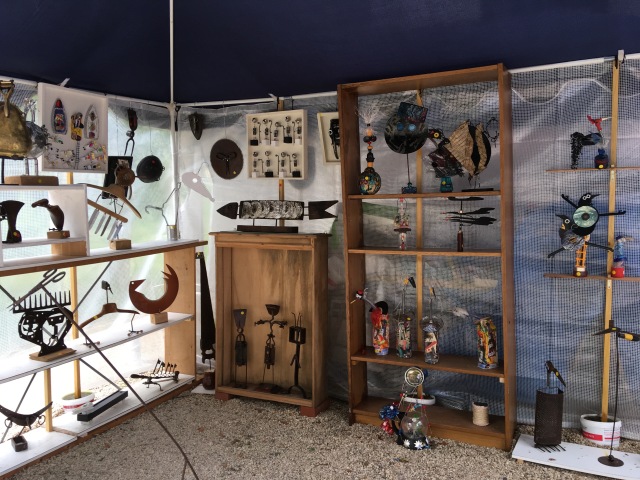 Second-hand shops are fairly common, and we have noticed book exchanges and other ways to keep materials in use.

Many people, ourselves included, have reusable shopping bags. We inevitably acquire new ones on each visit. And yes, I know that the energy involved in making reusable bags requires us to use them hundreds of times to justify their existence. All I can say is that we’re working on it.

As for recycling, it is a visible part of every walk we take, as we pass the various receptacles used here.

Paper, metal, and some plastic go into green bins with yellow lids. (Note the Tesla just behind the bins.)

Glass goes either into a green bin with a white lid that is specially designed to accept bottles, or into a bottle bank. Unfortunately, the bottle bank on the nearby boulevard is always removed just before major manifestations – presumably to prevent the use of its contents as projectiles.

When it was taken away in mid-January, we found an alternative. Not far away is a small, unassuming little receptacle that allows for the collection of glass underground. I think this is rather nifty.

There are also bins for textiles and clothing, some of which is sent for reuse and the rest for textile recycling.

Composting food scraps requires access to a “brown box,” but as of early 2020, these are available only in the 2nd, 12th and 19th arrondissements; we in the 14th do not have these yet. (Municipal compost is well established in Toronto.) But we spotted one on a walk.

Christmas trees can be deposited in 195 neighbourhood parks across the city for pick-up and composting for use in public spaces. Most Paris Christmas trees are quite small and light and taking them to a park is feasible.

Electronics recycling is available through some electronics stores. And some shops offer take-back programs for plastic containers and packaging. It’s a start, but there is a long way to go in the area of beauty products, most of which involve more packaging than product.

Even museums that distribute sticky badges to identify museum-goers who have paid the entrance fee are trying to keep the badges from getting attached to the nearest lamppost when the visitor leaves the museum. 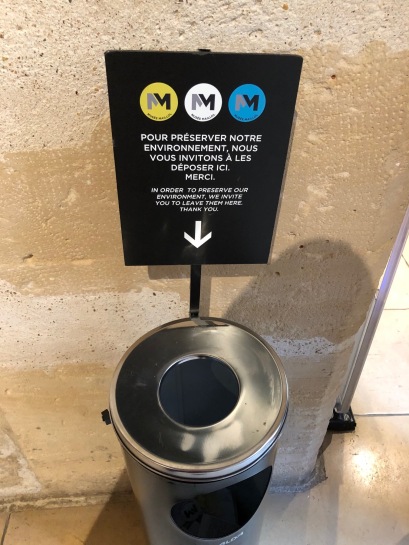 Whatever is left over from these waste-diversion efforts goes into green bins with green lids, to be picked up by green trucks staffed by men in green uniforms.

Nonetheless, rubbish accumulates. Efforts are being made, not always successfully, to deal with the problem of mégots (cigarette butts). The poster says that Paris accumulates 350 tonnes of the things per year, and urges smokers to stub out their cigarettes and put them into public garbage bins.

There is still a lot of single-use plastic in circulation. Plastic water bottles are everywhere. And more and more people are buying ready-made or take-out meals in individual plastic containers, while food companies try to keep up with demand.

We bought a container of carrot salad that came with a tiny folding fork on the inside of the lid. A little notice on the lid informed us that we could reuse this fork up to 20 times. (I am not making this up.) For heaven’s sake, why offer the fork at all? Most people do not need it, and who on earth would reuse it 20 times?

As for buying in bulk (en vrac) with reusable containers, such outlets do exist in Paris, but they are thin on the ground, and in out-of-the-way locations. I have yet to discover one in the 14th.

In certain quarters, the anti-plastic thing has become, as such things do here, a fashion. The popular shop Merci sells glass drinking straws in bright colours (although why able-bodied grown-ups need drinking straws at all is a question for which I have no satisfactory answer). Utensils in wood and bamboo are making an appearance in a few food outlets (and have recently been adopted by Air France, as we found out on our flight home).

An upscale hardware store on the rue du Bac offers an array of old-fashioned cleaning implements in wood and metal, offering the fantasy of cleaning one’s house as if one were on the staff at Downton Abbey. 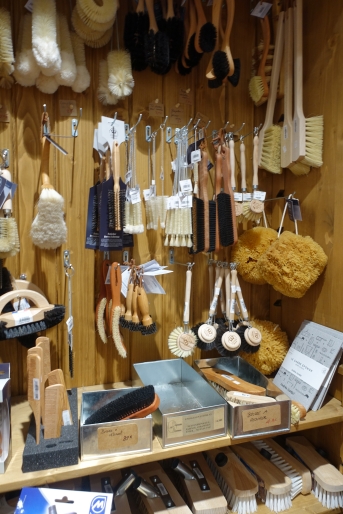 At the same time, there are some long-standing traditions of conservation in France that predate our current concerns about the environment. Les minuteries (timed light switches) prevent hall lights being left on unnecessarily (the subject of endless jokes by English-speaking travellers unaccustomed to such things). Cold-water-only taps are common in restaurant and museum washrooms. Electricity and petrol are expensive, and are not wasted as much as they are in North America. And ingrained traditions of thrift persist among Parisians who remember the war (or who grew up with parents who did) and have never fully embraced the use-and-toss consumer lifestyle.

My decidedly unscientific survey suggests that Paris is making some progress in reusing and recycling, but has not fully embraced the ethos of “reduce,” any more than Toronto has. Particularly not during the January season of soldes (sales), when shops are desperate to clear out unsold merchandise in order to bring in new items.

Then I opened a copy of Le Monde and found this cartoon: 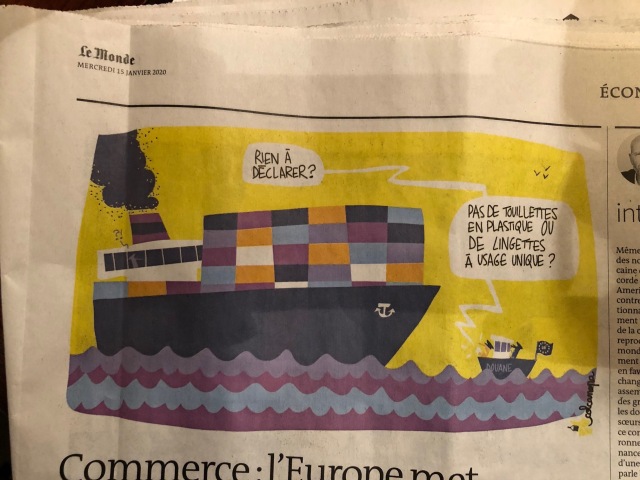 The EU customs officer is asking the baffled captain of a container ship that is belching black smoke into the sky: “Anything to declare? No plastic swizzle sticks or disposable baby wipes?”

It made me laugh and made me think. Yes, we can all do much more to avoid creating rubbish and to dispose of it responsibly, but the greatest gains may not be made by individual consumers, no matter how many shopping bags we carefully reuse and how many bottles we dutifully recycle.

Text and photographs by Philippa Campsie; photograph of green garbage truck from the website of the Ville de Paris.

Parisian Fields is the blog of two Toronto writers who love Paris. When we can't be there, we can write about it. We're interested in everything from its history and architecture to its graffiti and street furniture. We welcome comments, suggestions, corrections, and musings from all readers.
View all posts by Parisian Fields →
This entry was posted in Paris civic functions and tagged Emmaus, garbage collection, incineration, Institut Protestant de Théologie, Issy-les-Moulineaux, Petite Ceinture, recycling, sanitation, Viaduc des Arts. Bookmark the permalink.