Greeting the New Year in French

Posted on January 3, 2016 by Parisian Fields

We’ve never been very good at New Year’s resolutions. I’m still carrying around that five pounds I meant to lose in, um, 2012, and Norman still hasn’t cleaned out the area around his basement work bench. But this time, we think we may be on to something, because we started early – in November.

Our plan was to spend more time in 2016 working on our French language skills. I’ve attended university in France, and Norman completed French-language requirements for graduate school and employment in Canada’s federal civil service, but for both of us, that was a long time ago (although I still have my old textbooks, shown below). When we are not in France, opportunities to use the language are infrequent. 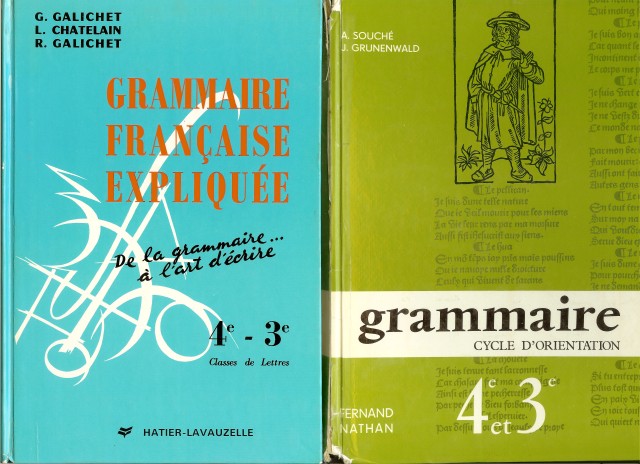 We talked about things we could do: listening to French radio, reading French books and newspapers, and so forth, but we still felt the need for a more structured and routine approach. In the end, the answer – or a part of the answer – found us.

In November, we received an e-mail from a woman called Heloisa who represents an online French learning system called Frantastique. Would we allow her to place advertising on our site? Well, no, we can’t do that. The terms of some of the archival materials we use require us to be non-commercial. Nonetheless, she offered to let us try it for a few weeks to see what we thought.

We weren’t sure what to expect. Neither of us had ever taken an online course before.

The first ten lessons (delivered at the rate of five a week) were designed to test our knowledge of French and after that we would receive lessons tailored to our individual needs. Those first lessons were based on a quirky series of cartoons about French-speaking extraterrestrials who bring Victor Hugo back to life and set off with him on a voyage to Paris to stock up on French mustard. I for one would like a T-shirt with their slogan “Liberté Egalité Moutarde” on it. 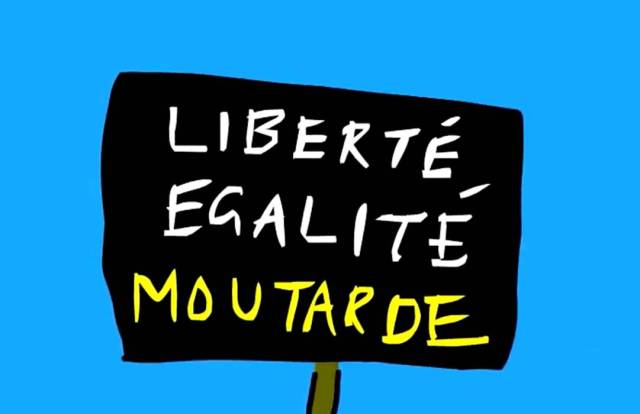 Each lesson begins with a song, a reading, a dialogue, or an animated cartoon, containing elements of the theme of the lesson, which includes vocabulary, conjugations (audible creaking of mental gears when it came to the passé simple), and exercises focused on a particular grammatical point, such as comparisons or conditional sentences. There are aural comprehension exercises and the program scrupulously advises us of the source of the French accent: Paris, Belgium, Quebec, the south of France, and so forth; in pronunciation examples, there is usually a choice of French or Canadian.

Frantastique also makes use of songs to drive home grammatical points: here we have Edith Piaf and others in the service of the correct way to use expressions of negation. Non, je ne regrette rien. 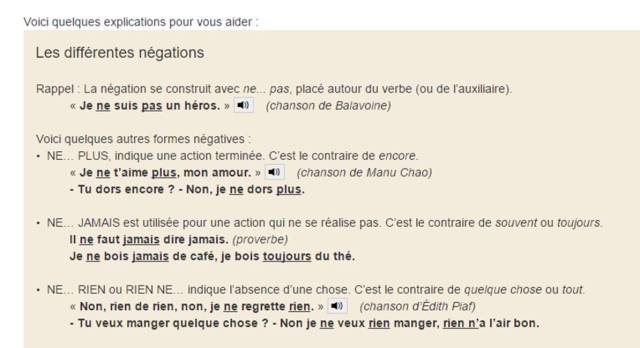 When you have finished your exercises, you get “le dessert du jour.” I look forward to these tidbits: film clips, excerpts from songs or poems, or French proverbs. I loved this little video about an American (speaking terrible French) who wants to buy a “real French beret.”

You submit the exercises (the software first ensures that you haven’t missed anything), and receive your “Correction” within a few minutes. (At first Norman had technical problems sending the lessons, and some Corrections ended up in his spam filter, but we think we have it sorted out now.) You get a mark and copious feedback both on what you did right and why (which is helpful if you made a lucky guess on a multiple-choice question) and on what you got wrong. In future lessons, you will review your errors again, to ensure you have mastered these points. This can be a trifle annoying when the error was caused by a slip of the finger, but useful if you really didn’t grasp the grammatical rule properly.

With the Corrections come further details about the source of the “dessert” – information about the filmmaker or the songwriter or the poet. Here is the one from the video above: 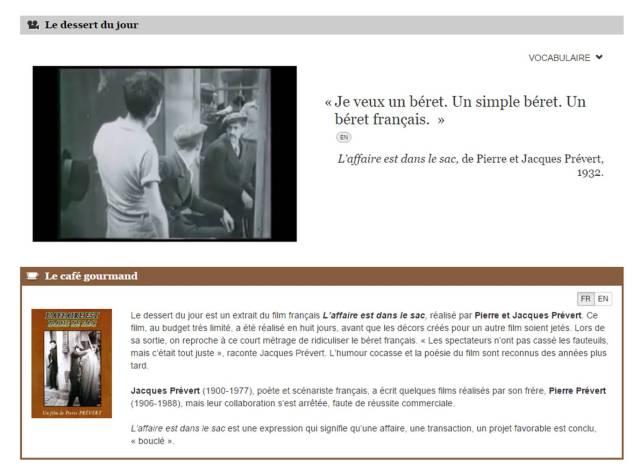 Who knew Jacques Prévert made films?

At every point, you have the option to click on “EN” for an English translation of a rule or a correction. Sometimes, the English is not necessarily a translation of the French version, but an informally written note about the same point. I found this out by chance, after carefully trying to read everything in French. I was glancing at a Correction that required me to distinguish between the words “francophone” and “francophile” (terms I know well). But in scrolling down to the next part, my cursor hovered over the “EN” and the following popped up:

This gentle humour is typical. Some of the cartoons are hokey, but they keep you paying attention. Other episodes are more serious, such as the one about a heart-broken Victor Hugo writing a poem about the death of his much-loved daughter Léopoldine (Victor, shown below, makes numerous appearances in the series), or a news item about political fractures within the European Union. 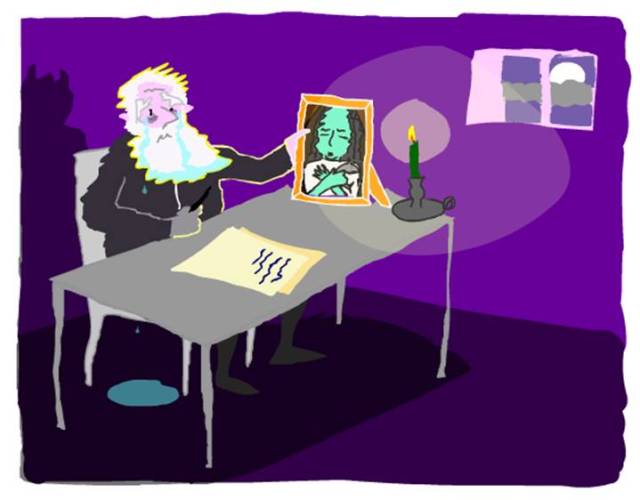 Sometimes I find the lessons too short, because I am enjoying stretching disused mental muscles. They seldom take more than 10 minutes to complete, plus a few more minutes to review the Correction, and a few take even less than that, although I have asked for the longest possible lessons. But the benefit is that one can always squeeze in 10 minutes, even during the busy Christmas season. We’ve never missed a lesson (although the software is forgiving if you do, apparently).

There are other features and settings we haven’t tried. If you are a strait-laced type, you can select the “mode sans épices,” which we gather means suitable for family viewing  (although we haven’t seen anything scandalous, only the odd reference to extramarital relations and hangovers).

You can choose which five days in the week you like (but you can’t have more than five). You can suspend delivery during a vacation. You can download the app and complete your lessons on a smartphone.

One thing Frantastique cannot do, of course, is improve your spoken French. It will give you guidance about things like silent consonants at the ends of words and there are lots of examples to listen to, but it cannot tell you if you are mangling your vowels or stressing the wrong syllable. And you cannot practice the skills required for keeping up your end of a conversation. For that, we suppose, we’d need in-person instruction. (We would welcome suggestions from our readers for improving our conversational skills.) Still, Frantastique  helps with reading and aural comprehension (dictée!) and as well as grammar and vocabulary.

Now if any of this appeals to any of you, Frantastique will allow us to forward your name and e-mail address and you too will get a free trial month. We receive no money for this transaction, but we will receive extra free lessons if you then choose to subscribe. The basic subscription works out to about $1 Canadian a lesson. Given the state of the Canadian dollar, that seems reasonable.

Here’s to better French in 2016. Meilleurs voeux to all our readers and correspondents. 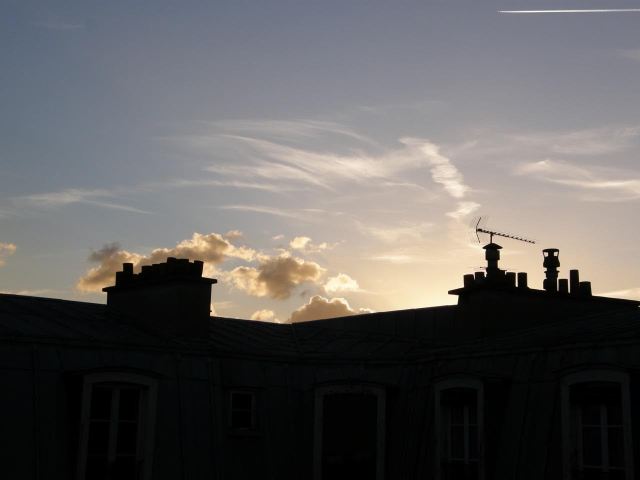 Parisian Fields is the blog of two Toronto writers who love Paris. When we can't be there, we can write about it. We're interested in everything from its history and architecture to its graffiti and street furniture. We welcome comments, suggestions, corrections, and musings from all readers.
View all posts by Parisian Fields →
This entry was posted in French language and tagged Edith Piaf, francophile, Frantastique, Jacques Prévert, Victor Hugo. Bookmark the permalink.

6 Responses to Greeting the New Year in French