First we take Manhattan, then we take Paree!

I bought my first Eloise book from a secondhand bookstall at school when I was 9 or 10. It was Kay Thompson’s Eloise in Moscow, and I was captivated by Hilary Knight’s illustrations, including a fold-out view of a wintry Kremlin. A year or so later, probably in the same place, I bought Eloise at Christmastime, and discovered her natural habitat – the Plaza Hotel in New York.

By then I felt I was getting too old for picture books, particularly ones featuring rambunctious six-year-olds – I did not know then that the books were also intended for grown-ups. So I didn’t read the first in the series, Eloise, let alone Eloise in Paris, when I was young. But recently, at another secondhand bookstall (a more upscale one, at the Antiquarian Booksellers Fair at Toronto’s Art Gallery of Ontario), I found Eloise: The Ultimate Edition, with all four original books and background about the writer and illustrator. I snapped it up.

Now I have been to Paris with the irrepressible Eloise (not to mention her companions, the long-suffering Nanny, Weenie the pug dog, and Skipperdee her pet turtle), and what a whirlwind it was.

From the moment they get on to the airplane (“Sabena is the only airline that will allow you to travel with a turtle”), I was transported back to 1957, when air travel was still a luxury. Eloise and her Nanny sleep in berths (like the ones I have used on overnight trains in Europe). The other passengers are fashionably dressed. They land in Brussels and take a helicopter to Paris.

If this sounds like an unusual way to get to Paris, it is. But it was the outcome of a promotional deal with Sabena – Kay Thompson and Hilary Knight received free transatlantic tickets in return for a plug for the airline, well before the expresssion “product placement” had been coined.*

In Paris, Eloise’s party is met at the airport by the charming Koki, a chauffeur employed by Eloise’s permanently absent – but clearly wealthy – mother. Koki drives a Renault Dauphine (possibly another bit of product placement). 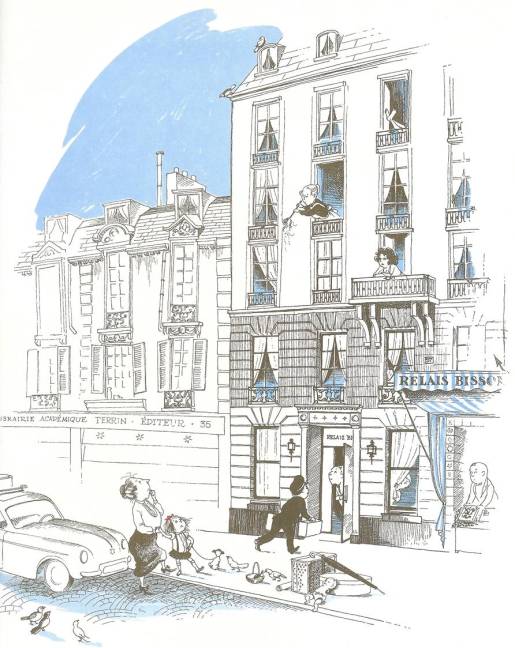 Eloise stays at the Relais Bisson at No. 37, Quai des Grands Augustins. The hotel is no longer there, but in the 1950s it was considered quite a chic place to stay. Again, Kay Thompson had wangled a free stay in return for depicting the 25-room, elevator-less hotel in the book. Hilary Knight drew it from life, with its central balcony opening towards the Seine (he did take some liberties with the location of the main door). He also shows the “Librairie Académique Perrin – Éditeur” next door at No. 35: a venerable publishing house, also vanished, but a going concern at the time. He and Kay also depicted the real owners – Monsieur and Madame Dupuis – much as they were.

This is what the building looks like today in Google Street View.

Interestingly, as soon as the characters land on European soil, the main background colour in the illustrations changes from Plaza pink to Bisson blue.

Eloise, Nanny, and the menagerie occupy the central room with its distinctive balcony, where they are shown having breakfast in the morning. At night, Eloise leans out to say bon soir to Notre Dame; the hotel was known for its stunning views across the river to the islands and the cathedral.

Eloise is in fine form as she takes in the sites. She causes havoc in the Place de l’Etoile traffic circle, leaps into the fountains in the Place de la Concorde, and nearly loses Weenie and Skipperdee at the coat check at the Louvre. They shop in flea markets (Eloise collects champagne corks) and on the rue St-Honoré. Eloise is fitted for a frock at Christian Dior by the great man himself, with his assistant and eventual successor, a sombre-looking Yves St-Laurent, in attendance.

Like all tourists, they walk endlessly. “Here’s what you have to do in Paris keep moving a lot,” she notes. “There are absolutely nothing but streets in Paris.” “Il y a beaucoup de cobblestones in Paris and some of our feet are getting round.” And being Eloise, she doesn’t just walk, she skibbles, she sklathes, she zaps. At night they take footbaths. She also notes, “There are very few places where you cannot take a chien.” Fortunately for Weenie. 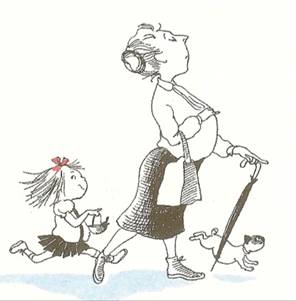 They return to the Plaza (and the colour changes back from blue to pink) with 114 pieces of luggage (having left New York with a mere 37). Eloise immediately summons Room Service to order watermelons, champagne, and seltzer water. As one does.

Some of the inspiration for Eloise in Paris had come from the author’s own trip to Paris in 1956, to film parts of the movie Funny Face with Fred Astaire and Audrey Hepburn. Kay Thompson played the part of Maggie Prescott, the magazine editor famous for her “Think Pink” campaign. Funny Face includes many of the places featured in Eloise in Paris – from the Louvre to the Eiffel Tower. However, during the film, the cast stayed at the larger and more luxurious Hotel Raphael, which did have an elevator. Koki, who appears in the book as Eloise’s chauffeur, is apparently a real person. He was the driver assigned to the cast of Funny Face.

Kay Thompson was a larger-than-life character, just like her fictional creation Eloise (a sort of imaginary friend/alter ego, with a name that may be based on Kay’s own middle name, Louise). Kay was a handful as a little girl; because she was plain compared to her two pretty sisters, she would misbehave to get attention. She became a singer and vocal coach who worked with Judy Garland, and she once had a nightclub act with four brothers (of which one, Andy Williams, was rumoured to be her lover).

But if Eloise’s voice and antics belong to Kay, her appearance belongs to Hilary Knight, the artist. His relationship with Kay Thompson was often fraught (she could be very difficult to work with, and he was woefully underpaid for his work), but you would never know from the vigour and bounce of his illustrations. The pictures range from clever vignettes to landscapes full of detail – the man demonstrating wind-up toys in front of Fouquet’s, a wall poster advertising a Foujita exhibit at the Galerie Paul Petrides, the children walking with a nun in the Bois de Boulogne (perhaps a nod to Eloise’s rival Madeline). The picture of Eloise returning through customs with her new acquisitions (“We had absolutely nothing to declare”) is a masterpiece.

Knight drew some inspiration from the misbehaving schoolgirls in Ronald Searle’s St Trinians series, as well as Norman Thelwell’s pony-mad little terrors, among other influences, but Eloise is an original. He was able to translate Kay Thompson’s imaginary creation and make her memorable and wholly herself. 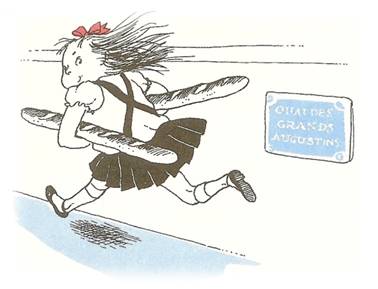 Kay Thompson died in 1998, but Hilary Knight is still drawing and Eloise is only one of his creations in a long and successful career as a professional illustrator.** His portrait of Eloise (actually the second of two, since the first was stolen) still hangs in the Plaza. Say bonjour when you are next in town. 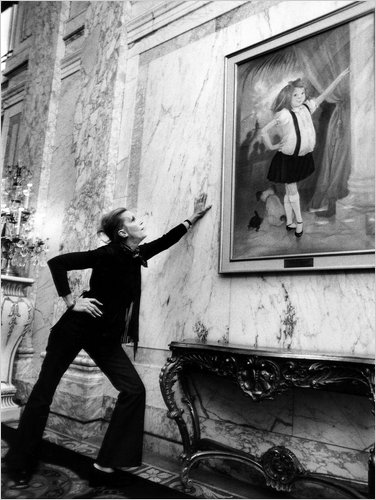 ** I particularly loved the illustrations he did for the books of Peg Bracken (notably the I Hate to Cook Book).

Parisian Fields is the blog of two Toronto writers who love Paris. When we can't be there, we can write about it. We're interested in everything from its history and architecture to its graffiti and street furniture. We welcome comments, suggestions, corrections, and musings from all readers.
View all posts by Parisian Fields →
This entry was posted in Paris popular culture, Paris travel and tagged Andy Williams, Audrey Hepburn, Eloise in Paris, Fouquet's, Fred Astaire, Funny Face, Hilary Knight, Kay Thompson, Librairie Académique Perrin, Quai des Grands Augustins, Relais Bisson, Renault Dauphine, Sabena. Bookmark the permalink.

15 Responses to First we take Manhattan, then we take Paree!