The further adventures of the Nurse Who Wore Pearls

A friend recently asked us how we plan what to write about in our blog. The answer, in Norman’s words, is this: “Planning is what you resort to when chance breaks down.” And somehow, chance seldom seems to break down. This blog is a case in point.

A few months ago, I received a comment about a blog post I had written on Queen Philippa. The writer was a professor of medieval history who wanted to use one of my photographs in a lecture. Turns out she taught at the University of Toronto, where I am an adjunct professor myself. We arranged to meet for coffee.

Chatting in her light-filled office with a view over one of the prettier parts of the campus, we found we had many common interests. She was originally from France, but had spent much of her life in Québec. When I mentioned the enjoyment we get from researching stories behind old postcards, she went over to a shelf and took down an album: 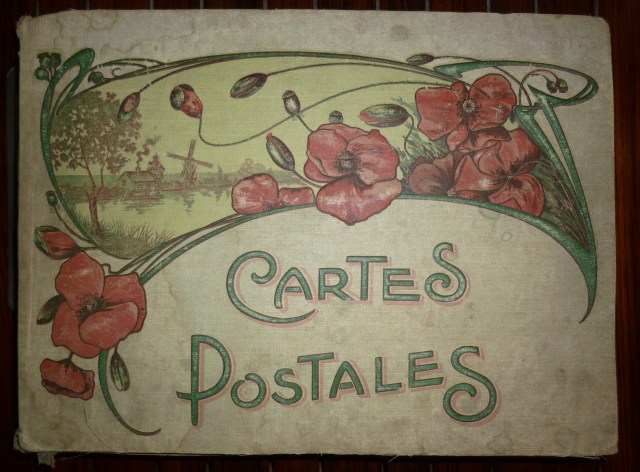 She had inherited it from a relative who had collected postcards, particularly those in series, and offered to lend it to me.

That night, Norman and I went through the pages, turning them carefully as some were a bit crumbly. About halfway through the album, I saw a familiar face: the Nurse with the Pearls, who had made an appearance in a previous blog. 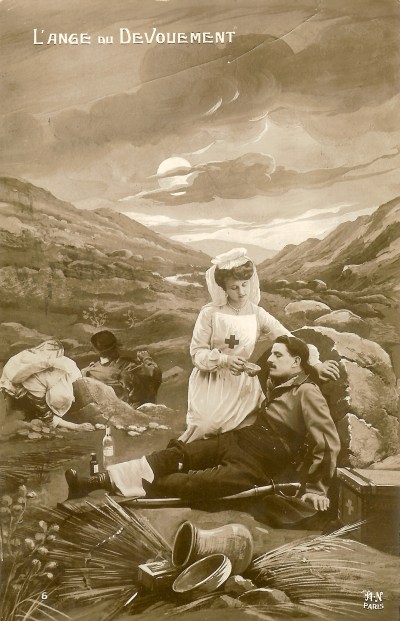 The picture above is the postcard in my own collection. In my friend’s album, the postcard was part of a series, and the card had some interesting differences. I realized that I had made some erroneous assumptions about the card when I had seen it before.

The first thing that struck me was the postmark: 1909. This was not, as I had supposed, a First World War card. The “Ange de Dévouement” had been pressed into service as a wartime card in 1914, but its origins went farther back. But before I go on, let me show you the series of five, with captions translated rather literally, so you can follow the story.

“Go, my dear daughter, where duty calls you. Of all missions, yours is the most beautiful.” 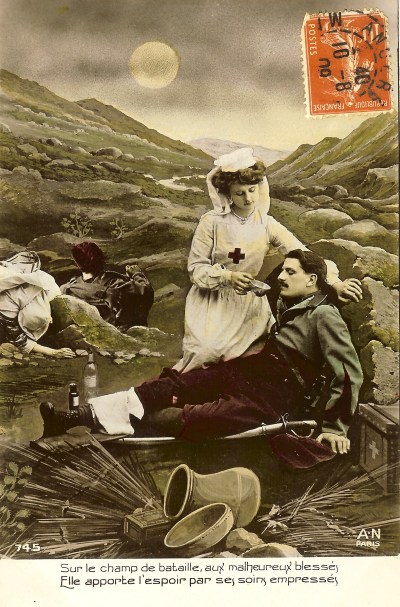 “On the battlefield, she brings hope to the wounded with her attentive care.” 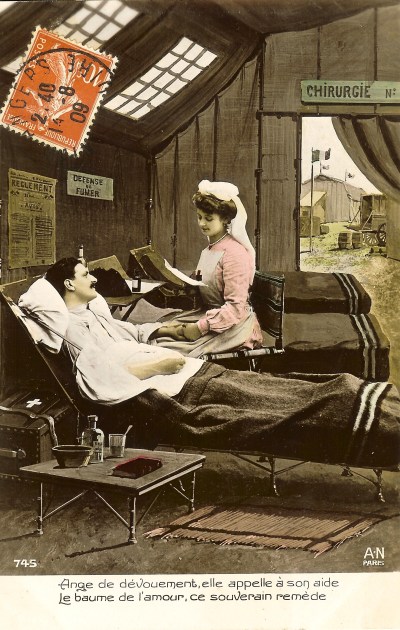 “The angel of devotion, she calls to her aid the balm of love, that sovereign remedy.” 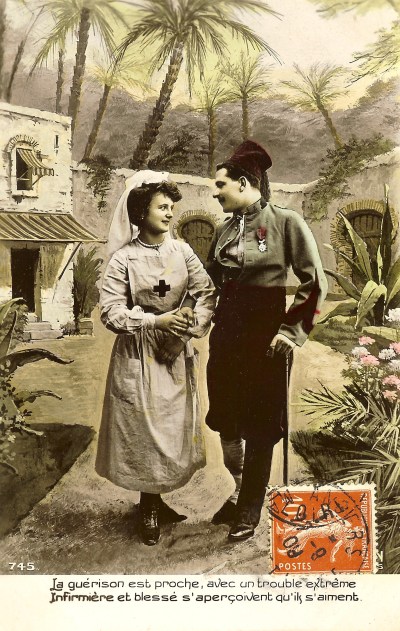 “Healing is nearly complete, which brings a deep anxiety, [since] the nurse and the wounded man realize that they love each other.” 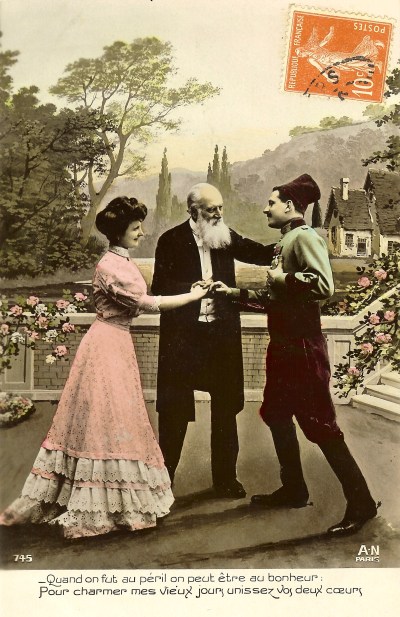 “When one has been in peril, one can be happy: to charm my old age, unite your two hearts.”

The cards, unlike others in series, are not numbered, so there might have been others. I wonder if there was some further complication before the happy resolution. But I love the fact that her pearls are firmly in place in the three middle images.

If you look closely, you will see that the backgrounds are not real. The figures have been photographed in a studio, and their images cut out and superimposed on painted backgrounds. Perhaps the least convincing is the one inside the hut; the two empty bunks are at the wrong angle, although the view through the tent flap is more realistic.

And look at the man’s uniform in the last two, especially the fez and the baggy trousers. He is no ordinary French soldier; he is a Zouave. In the late 19th and early 20th century, these regiments were made up of French settlers in Algeria and Tunisia conscripted into the French army. The background of the fourth postcard also suggests north Africa, with its palm trees and keyhole-shaped archways.

And what was the battlefield? Was it one of the battles by which the French extended their control over north Africa, or one of the skirmishes with British soldiers, as Britain was also trying to assert itself in that part of the world? We’ll never know. I think the postcard was left deliberately vague so that buyers could imagine what they wanted.

One purpose of the series might have been a bit of propaganda for the Red Cross. Would young women be more inclined to join the ranks of the nursing sisters if there was a possibility they would meet handsome young soldiers they could marry? Perhaps.

The mark “AN Paris” indicates that the series was the work of Armand Noyer, a prolific creator of postcards, stereocards, and cartes de fantaisie, many of them featuring shapely women in various states of déshabille (the risqué ones date mostly from the 1920s and 1930s; his prewar production was more straitlaced). He numbered each series: this one is 745.

The postcards were sent from someone called Madeleine, who lived in Angers, to Monsieur and Madame Emile Marsais, who lived at Les Grandes Barres, St-Aubin-de-Luigné, about 25 km southwest of Angers. Today there is a vineyard there.

The first four were sent between July and September 1909. Madeleine asks when Mrs Marsais will be visiting Angers, inquires about the couple’s trip to Lourdes, notifies them that she will be on the 1:57 train but not to worry about meeting her, and lets them know that she and her father will be driving out to “see the vines on Sunday.” Ah, so there was a vineyard then, too.

The fifth does not have a clear postmark, but seems to have been sent later than the others. Madeleine notes that the water has finally retreated from her father’s cellar, and none too soon, since at its height it came up to the highest step on the stairs. From that detail, we can determine the date: there was a flood in Angers in March 1910, two months after the devastating Paris floods.

Madeleine sent other series of cards to Mr and Mrs Marsais, although in most cases, she just scrawled “Bonjour” or “Amitiés” for a message. In the cards with a more detailed message, Madeleine’s spelling is a bit erratic; perhaps she was still just a teenager, or perhaps she had not had much of an education. Or perhaps she just was not very good at spelling.

Her last name might have been Gouadon. On one of the cards from another series, she invites Mr and Mrs Marsais to lunch and concludes, “Amitiés à tous et à 11 heures Maison Gouadon.” This unusual surname is associated with that area.*

The album contains dozens of these series, many of them with winsome children in place of adult protagonists. These ones may seem impossibly sentimental, but in an age in which cat videos go viral, we in the 21st century cannot claim that the early 20th century had a monopoly on cutesiness.

I’ll leave you with some images from one of the children’s series, also sent by Madeleine [Gouadon?] to Mr and Mrs Marsais. All were mailed in April 1909.Since they are all rather similar, I will show only the first one in detail. The words underneath are about the joys of being brother and sister. I’ll spare you the translation. 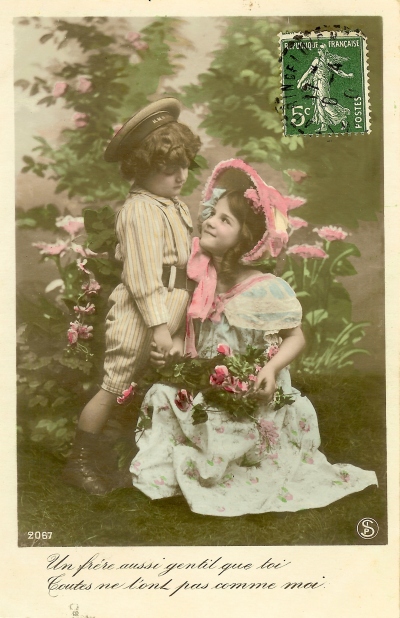 Note that in the few months between the time these were sent, and the time Madeleine sent the series about the nurse, the price of postage has doubled, from 5 centimes to 10!

*The French have a wonderful website that that allows you to see where certain surnames are most concentrated. Type in a family name and the map will indicate where people with that name were born during four periods: 1891-1915; 1916-1940; 1941-1965; 1966-1990. For example, only 5 people with the name Gouadon were born in all of France between 1891 and 1915, two of them in the Maine-et-Loire department, where Angers is located. Perhaps Madeleine was one of them.

Parisian Fields is the blog of two Toronto writers who love Paris. When we can't be there, we can write about it. We're interested in everything from its history and architecture to its graffiti and street furniture. We welcome comments, suggestions, corrections, and musings from all readers.
View all posts by Parisian Fields →
This entry was posted in Paris postcards, World War I and tagged Ange de Dévouement, Angers, Armand Noyer, Emile Marsais, Madeleine Gouadon, Maine-et-Loire, postcards, Red Cross, St-Aubin-de-Luigné, Zouave. Bookmark the permalink.