The meaning of two wheels and a motor in Paris

It is glorious to walk the streets of Paris and revel in the colour, especially after hours in the cramped unbearable beigeness of an airplane. (Whatever happened to the use of the word steerage?) We were grateful to be on the ground and surrounded by such beauty. This is one of the first photos I took on a May afternoon last year. Sometimes I see Paris through the colours and images of motors and two wheels. 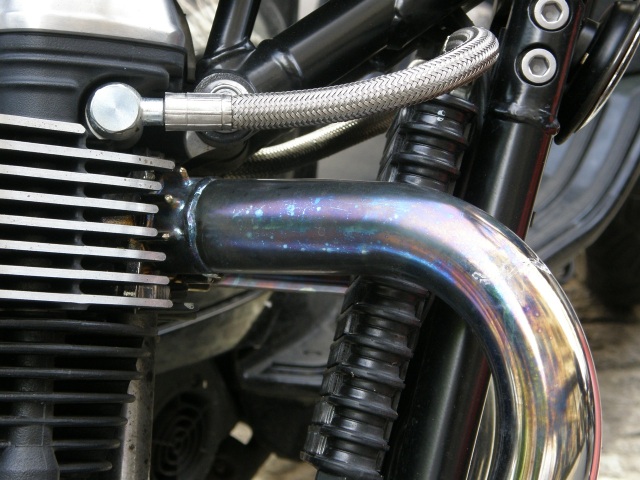 We had started to sate our need for beauty and colour in Artcurial, then in a few shops on the Avenue Montaigne. Surrounded by conspicuous prosperity, I caught sight of the bright orange and subdued grey paint of a Triumph motorcycle. In pursuit of an interesting photographic angle, I knelt to peer closely at the exhaust pipe, cylinder head, and braided stainless steel line shown above.

The sidewalk was crowded. Philippa is not usually surprised when I stop or wander off with my camera. But this time she whispered: “What are you doing down there?” I was unaware of the small crowd I had attracted until I walked away. I looked back and saw 5 or 6 people bent over the motorcycle, peering at it. One was even kneeling. We had a private chuckle and later Philippa told me how much she liked that shot.

Many of my memories of Paris are expressed in reflections. This is what happens when one walks slowly and stops often. A passing blur becomes a building etched on the windscreen of a Piaggio.

In the shot below, my attempt to capture the vivid blue, bright chrome, and curves that reflect the surroundings almost into pure abstraction brought another accidental crowd. The same thing happened as I captured some exhaust pipe and muffler studies I might use for another purpose. 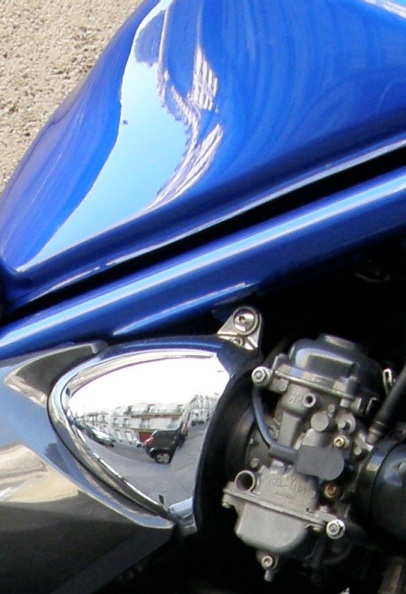 Sometimes the makings of vivid memories just jump out. I like red. The red on this motorcycle screamed at me, a welcoming scream, I might add.

Screaming red and voluptuous bodywork deserved a full stop and some major gawking. That was just the beginning. I looked closely. This stunning piece of machinery was an MV Agusta and when I saw it I had no one to share my excitement with. 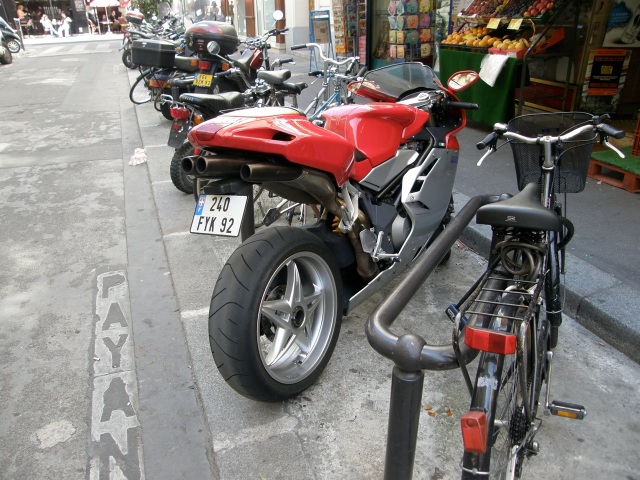 I might have been a bit incoherent and reverently mumbled something about “Meccanica Verghera Augusta.” I had read about such machinery from my teens but never seen one this close. MV Augusta, a company founded in 1945, made its first motorcycle the following year and also won its first race the same year. Many times a World Champion.

Ah Paris, you are so good to me.

I spotted this Honda about the same time as the owner spotted me. It had an appealing chunky design and the orange and chrome winked at me in the sun. As I recall, someone asked why I was looking at the bike. I told him it was very good looking and I like motorcycles. He just stared at me. I asked if could take a picture. He nodded and said he worked in the store right behind us. He walked off, but his eyes stayed on me. 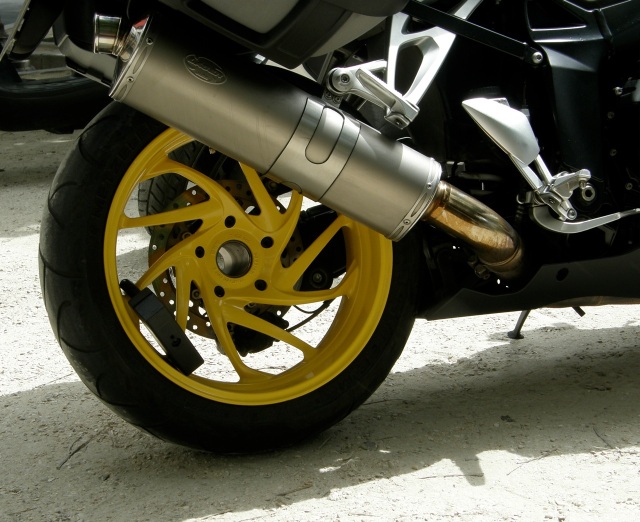 As many know, Paris (with or without champagne, absinthe, or wine) can be very intoxicating and disorienting. Here a lonely scooter helps us decide which way is, well, down. 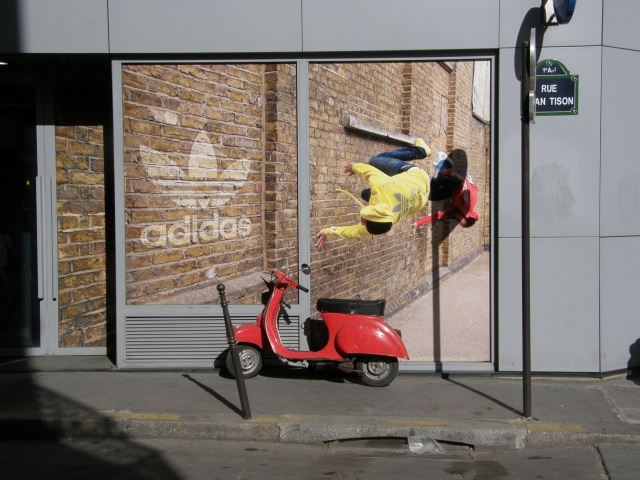 The anthropologists and art historians tell us we decorate ourselves as a means of expressing both individuality and belonging to a group. Sometimes the symbols are fairly straightforward. And I recognize the one below. But plastered all over the windscreen of a scooter in the heart of Paris? I’ll let you work on that message. Let me know your theories or stories. 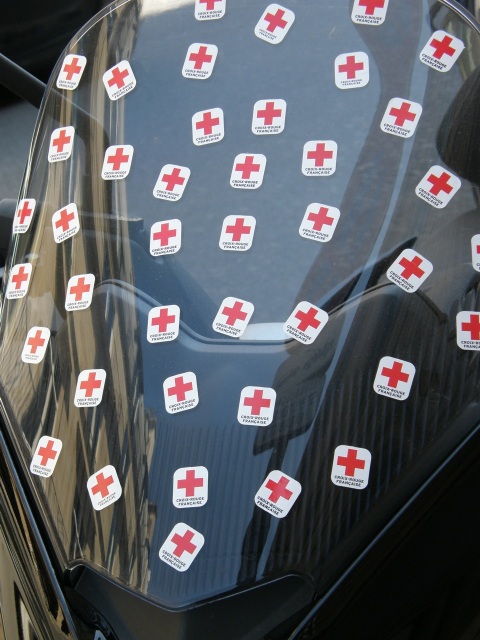 In Paris I also enjoy distinctive motor sounds and have often surprised Philippa by identifying them by name before we see the source. I ask, who could not possibly appreciate the differences between the sound of a Ferrari in full scream and a Porsche winding up into its own roar? Or not physically feel the spine-tingling, ear-biting whine of a high-revving, motorcycle engine just shy of the redline?

What do two wheels and a motor mean to me? I have tried to share the beauty and the wonder, and how they reflect the familiar into the newly almost-familiar. But there is something else. Despite all the light-change drag races on rue de Rivoli, two wheels and a motor in Paris mostly say quiet and remind me of walking home. I started to feel at home in Paris — even though regrettably it has never been our full-time home — when we rented an apartment in the Marais. We rented it three times and the sight of this lone motorcycle and a relaxed French flag still reminds me of that time and says home. 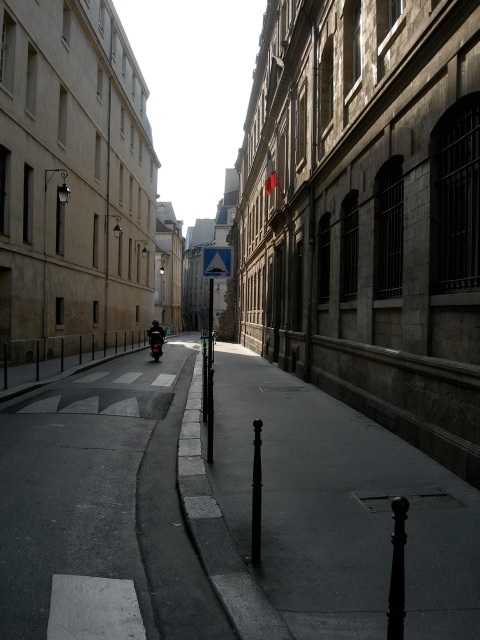 Text and photographs by Norman Ball

Parisian Fields is the blog of two Toronto writers who love Paris. When we can't be there, we can write about it. We're interested in everything from its history and architecture to its graffiti and street furniture. We welcome comments, suggestions, corrections, and musings from all readers.
View all posts by Parisian Fields →
This entry was posted in City of Reflections, Paris automotive and tagged Artcurial, Honda, Marais, Meccanica Verghera Augusta, motorcycles, MV Agusta, Piaggio, scooters. Bookmark the permalink.