Tall tales and some Paris-Marseille rivalry

Tall tales abound in every culture. When Philippa and I set out to explore our new neighbourhood in May, we never suspected that we would learn more about tall tales in France.

On the nearby Rond-Point des Champs Elysées, a small sign announced a familiar name: Artcurial. We crossed the forecourt and entered. What appeared to be crowded bookshelves at the end of the hall turned out to be a wallpaper that only looked like that, and directed us to one of the finest bookstores we have seen in Paris. 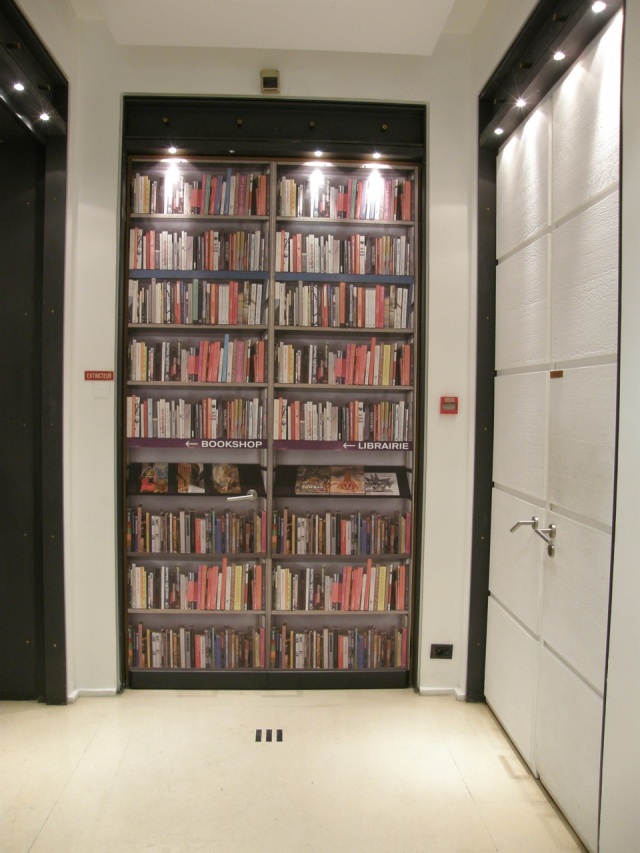 It was expertly stocked and exquisitely laid out with the sophistication we associate with the name Artcurial. Amidst the wealth of books on the history of painting, sculpture, photography, fashion, architecture, and industrial design, there was a single copy of a bilingual book with a rather lurid cover: Photomontages Improbables (Improbable Photomontages) by Alain Weill. 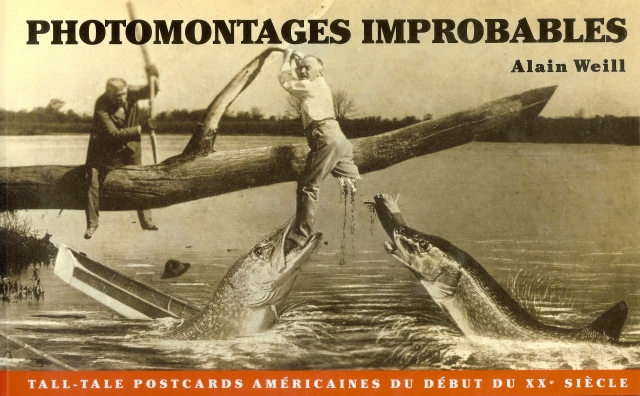 I knew about the work of 19th-century photographers such as William Notman, who merged many single photos into massive groups shots. And we had seen an exhibit at the Art Gallery of Ontario that featured the work of aristocratic women of 1860s and 1870s, who cut photo portraits from the ubiquitous cartes-de-visite of the day and embellished them with their own paintings. Posing as amusing works of art, these photocollages often provided incisive, even cutting, social and political commentary.

The images on the postcards in Photomontages Improbables were quite different. Their impact depended on having at least one element per image that was wildly out of scale. The oversized images recalled the tall tales genre in which the familiar – or the somewhat plausible – is exaggerated, often to show the superiority or distinctiveness of a region, individual, group, or activity.

Weill’s book is primarily about the work of two American photographer/publishers (William H. Martin and Alfred Stanley Johnson) who, starting in 1908, used photomontages to create absurd, fantastic, and exaggerated postcard images and messages. They created images such as an ear of corn so big that it had to be hauled on a wagon by a team of horses, or cut with a lumberjack’s saw, tomatoes so large a wheelbarrow could hold only one, two onions that took up an entire railway flatbed car. This genre lasted many decades, but holds little interest for me.

However, I spotted an altered image of an unusual French bridge, of a type that I had written about it in a previous blog. This bridge was in Marseille, and the photo had a curious addition. Slung beneath the bridge, covering the entire width of the waterway, was a fish, to be precise a Very Large Sardine.

This was the only French photograph in the book. The author implied that this was a specifically American genre and that there were very few French postcards of this type. I didn’t believe him. I was sure there were more French fantastic or tall-tale postcards. So began a new quest.

With my electronic dictionary on standby, I asked a few postcard dealers at the stamp and card market off the Champs Elysées about les cartes postales fantastiques (fantastic postcards) with images such as ponts et poissons (bridges and fish). They assured me such things were quite common. One dealer said he would bring some for me if I came back on Thursday. 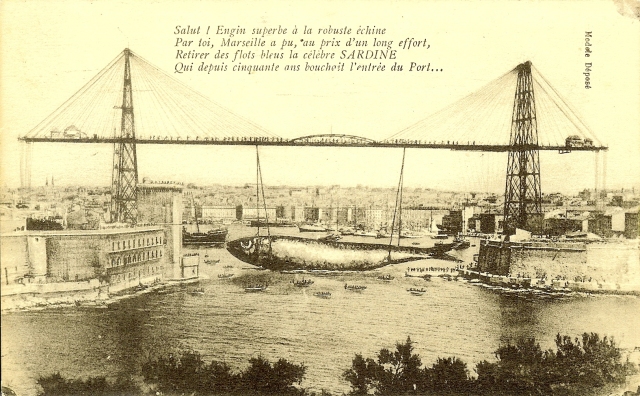 I duly returned on Thursday. The dealer had brought quite a few, including the one above.* Except for the publisher, it was identical to the one shown by Weill in Photomontages Improbables. The dealer proudly proclaimed he himself was from the Marseille region and that people there liked to exaggerate as a way of showing their pride and letting the world know that theirs was a region worth visiting.

The bridge is the famous transporteur built to carry a section of movable roadway slung beneath it, complete with passengers and vehicles. The verse is a hymn of praise to the bridge and a reminder of how big the sardines are in Marseilles, a famous fishing port.

Greetings! Superb machine with sturdy spine
Through you, Marseille has, at the cost of a long effort, been able
To remove from the blue waves the famous SARDINE
Which for 50 years blocked the entrance to the Port.

Another card, which represents the sequel to the story, bears the title, Char Funèbre de la Célébre [sic] Sardine Marseillaise (Funeral wagon of the celebrated Sardine of Marseille). 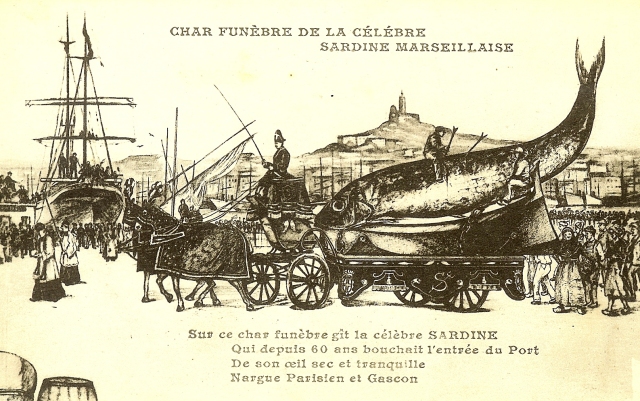 On this funeral wagon lies the celebrated SARDINE
Who for 60 years blocked the entrance to the Port
With his dry and tranquil eye
He scorns Parisien and Gascon [the people of the Marseille region].

Marseille might not have the Eiffel Tower, but it has its Enormous Sardine.

Although well inland, Paris sees itself as an important port. The city coat of arms bears a ship and Paris is in a region called l’Ile de France (the Island of France), although it is not an island at all. The postcard below is meant to remind Parisiens that real ports have more than just water and boats; real ports have plentiful fish. 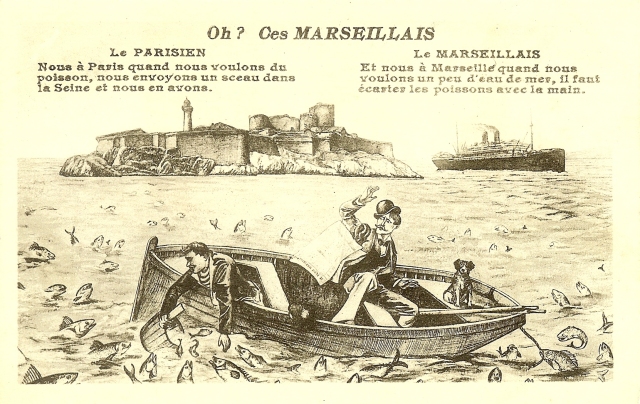 The card titled “Oh? Ces Marseillais” might be translated as “Oh, these people from Marseille.” That part was easy. The translation of part of the wording under Le Parisien took us some time to figure out. The problem word was “un sceau,” which translates as the stamp or seal one would put on a document. But recently, when Philippa was stumped by a translation, she asked Lucie, a French friend in Paris, who promptly replied that the troublesome word was simply a typo. Thinking along those lines, Philippa realized out that what appeared as “un sceau” should have been “un seau,” a bucket. Now we can translate.

Le Parisien says, “When we in Paris want some fish, we hurl a bucket into the Seine and we have some.”

But in Marseille? “Those of us from Marseille, when we want a bit of water from the sea, we have to beat the fish away with our hands.”

The lesson: if you want some place where the waters are teeming with fish, then go to Marseille. The Paris/Marseille rivalry is also evident in the figures of the two men. The robust fisherman in the striped jersey is clearly the clever Marseillais, whereas the confused and frightened-looking dandy who has lost his newspaper and soon might be hatless is the effete Parisien. Note also the determined fish – clearly a Marseillais – who has grasped the bow-rope and the stunned Parisien dog.

The card was sent from Marseille and the written message (in French) on the back begins, “In order to give you an idea of the jokes made about those from Marseilles, I am sending you a sample of their tall tales (galéjades).”

Clearly only the first card — the bridge and the sardine — is a photomontage, while the others might be more properly labelled simply fantastical drawings or collages. However, they all fit into the tall tale genre made from composite images. 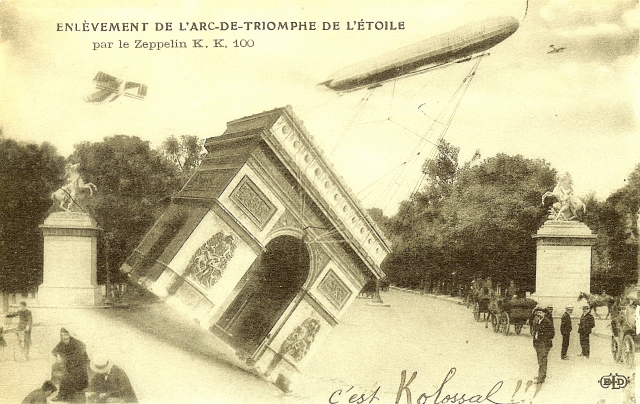 The picture of the abduction of the Arc de Triomphe uses photos, along with some touching up to insert things such as the cables from the Zeppelin and probably the airplane in the upper left. (Note that the Arc appears to have already been dragged the length of the Champs-Elysées, since it appears near the Chevaux de Marly, the statues of horses that stand near the Place de la Concorde.) Rather than a tall tale card, this might be seen as expressing fear for the future or perhaps a certain grim humour and defiance. The Zeppelin is, after all, German and although we do not know when the card was conceived or printed, it was mailed 21 October 1915.**

As so often happens, what starts as a chance encounter piques my curiosity, reminds me of what I know, points out what I do not know, and inspires me to learn a bit more. With French collage and photomontage, I know so little and have so much to learn. What started with an unplanned visit to Artcurial led me to postcards depicting tall tales representing at first amusing rivalries between cities and later deadly struggles between countries.

Text and photograph by Norman Ball

*Mine, regrettably undated, is identical to that in Photomontages Improbables with one exception. Mine has no published or named photographer, only the words Modele Deposé (registered trademark). Weill’s includes “Photo. Bourse. Edit. 22, rue Pavillon” (The rue Pavillon is in Marseille.)

**Another card posted online shows even greater havoc wreaked upon French monuments by modern aviation – Zeppelins and airplanes – and German aggression. This also was mailed in 1915. France and Germany were at war and Guillaume would have been Kaiser Wilhelm, Kaiser Bill to the Brits.

Parisian Fields is the blog of two Toronto writers who love Paris. When we can't be there, we can write about it. We're interested in everything from its history and architecture to its graffiti and street furniture. We welcome comments, suggestions, corrections, and musings from all readers.
View all posts by Parisian Fields →
This entry was posted in Paris history, Paris popular culture, Paris postcards and tagged Alain Weill, Art Gallery of Ontario, Artcurial, bridges, First World War, Marseille, Paris postcards, Photocollages, Photomontages, Photomontages Improbables, Sardine, Stamp and card market, tall tales, transporteur, William Notman. Bookmark the permalink.

1 Response to Tall tales and some Paris-Marseille rivalry