A recent New York Times article pointed out that the traditional division of Paris into Left Bank / Right Bank might be giving way to a more East-West distinction. (Some people will say that has long been the case.) And where would the dividing line fall? Presumably the Paris Meridian, which splits the city in half, indeed the whole country in half, from top to bottom, anchored by the Paris Observatoire.

Now you know and I know that time and longitude are supposed to be measured from Greenwich, which is two degrees and twenty minutes to the west, but the Parisians have their own meridian, thank you very much, and that Greenwich business is just a typical bit of British double-dealing.

It goes back to 1884 and the International Meridian Conference in Washington when the Paris-vs.-Greenwich feud was finally thrashed out. A year earlier, the French had succeeded in getting the international community to agree to use the metre as the standard for measuring distances. The French had defined the metre as one ten-millionth of the Paris Meridian as it passes over the distance between Dunkirk and Barcelona. (It is defined more precisely now, but that’s how it started.)

So now the meridian itself was up for grabs. And the British weren’t going to let the French have it their own way again. As Mike Parker, in his entertaining book Map Addict puts it:

There had evidently been some anglophonic stitch-up going on behind the scenes between the host Americans and their British cousins… After all, they cried, it’s someone else’s turn! You got the metre, now be a jolly chap and leave go the damned meridian, won’t you? Of course, the irony should not escape us that this Anglo-American pincer movement, so much of which depended on their reminding delegates of the recent French victory in measuring the world, came from two countries who have had as little to do as possible with the metric system ever since.

The French were out-manoeuvred. They abstained from the vote, to avoid looking like poor losers. But they dragged their heels as long as they could, and the Paris Meridian was still marked on French maps as 0˚ longitude until well into the 20th century. They also took to referring to Greenwich standard time as “Paris Mean Time minus 9 minutes, 21 seconds.”

And they still celebrate Their Meridian. In 1994, they commissioned Dutch artist Jan Dibbets to create an artwork to commemorate François Arago (1786-1853), who had calculated the meridian. Dibbets cast small bronze medallions with Arago’s name on them and embedded them in the ground along the line of the meridian through central Paris.

In 2000, as one of the country’s millennium projects, the French planted trees along the meridian line from the north to the south of the country. You don’t see the British doing that with their meridian.

Moreover, the Paris Observatoire is older than its counterpart at Greenwich. Construction began on the day of the summer solstice (June 21) in 1667. The architect was Claude Perrault – the brother of Charles Perrault, author of Cinderella (Cendrillon), Sleeping Beauty (La Belle au bois dormant), Little Red Riding Hood (Le petit chaperon rouge) and other fairy tales. Make of that what you will.

It was finished in 1672, three years before the English got around to laying the first stone of the Greenwich observatory. The Observatoire sits on top of a deep quarry, which means that the underground part of the building is roughly as deep as the building is high. Lurking in the depths are various high-tech clocks and other bits of sensitive equipment that need to be kept at a constant temperature.

Above ground, the building is oriented with its northern façade positioned exactly facing due north. There are two octagonal towers on the south side facing the garden, one of which now has a dome for using a high-powered telescope. When the building was under construction, the royal astronomer, Giovanni Domenico Cassini, asked for a proper viewing pavillion for a telescope, but Perrault ignored him. The architect was more interested in symmetry and views, and couldn’t be bothered with requests from the actual users of the building (there are still architects like that). Cassini had to cobble together a homemade viewing platform on the roof when he finally got into the building. The dome was added in the 19th century.

In 1951, Jean Prouvé was commissioned to create the Meridian Room, which traces the Paris Meridian (oh, hey, let’s just call it The Meridian, we’re among francophiles) the length of its floor.

The building is still in use, and we walked around it in December. The garden was closed to allow the grass its winter “repose.” 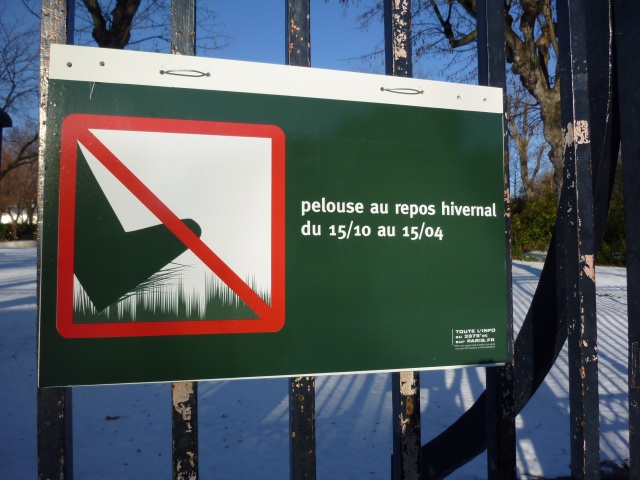 We spotted some odd, falling-down buildings on the south side from the boulevard Arago. The closest one, which is almost a skeleton, seems to be made of metal and has at one time been heavily insulated. We wondered if it had been used for cold-temperature experiments.

That and the rather-worse-for-wear sign on the Institut d’Astrophysique suggest that perhaps French astronomy is not keeping up with the times. 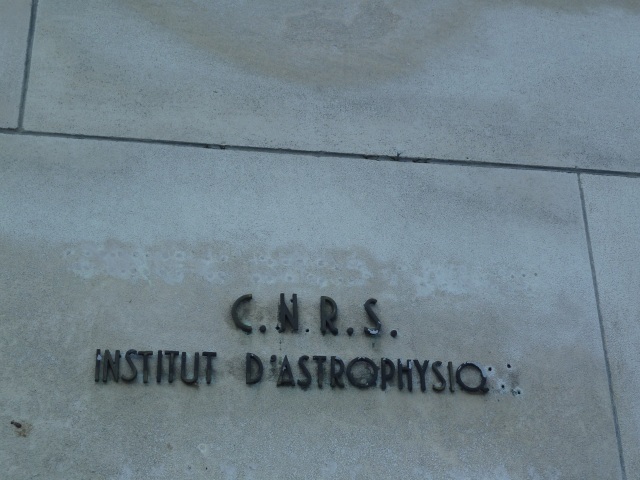 But The Meridian, by gosh, that they have, and that they will keep. That Other Line is just Paris Mean Time minus 9 minutes, 21 seconds.

Further reading: The story of the Paris Meridian vs. the Greenwich Meridian forms a chapter of Map Addict by Mike Parker (London: Collins, 2009).

Parisian Fields is the blog of two Toronto writers who love Paris. When we can't be there, we can write about it. We're interested in everything from its history and architecture to its graffiti and street furniture. We welcome comments, suggestions, corrections, and musings from all readers.
View all posts by Parisian Fields →
This entry was posted in Paris gardens, Paris history, Paris maps and tagged Charles Perrault, Claude Perrault, François Arago, Giovanni Domenico Cassini, Greenwich Mean Time, Institut d’Astrophysique, International Meridian Conference, Jan Dibbets, Jean Prouvé, Map Addict, Mike Parker, Paris Mean Time, Paris Meridian, Paris Observatoire, Paris observatory. Bookmark the permalink.