When we rented an apartment near the Val-de-Grâce, the lady who owned the flat told us that the church and buildings there were very beautiful, but the only way to see inside was to go for mass on Sunday morning. She was right about the first half of that observation, and wrong about the second.

Perhaps others labour under the same misapprehension, because the Val-de-Grâce is little visited. We’d like to set the record straight and encourage more visitors. This beautiful group of 17th-century buildings is open to the public four days a week and contains a museum devoted to the history of military medicine, the Musée du Service de Santé des Armées.

The Val-de-Grâce complex includes a general hospital that was at one time a military hospital, hence the focus of the museum. The hospital is now housed in a modern building on the east side of the property, separated from the original buildings by a large garden. The older buildings have been beautifully restored and consist of a church, the museum, and a library, all of which are open to the public. There is also a medical school for the military in one wing and on the upper floors, apartments for senior military personnel.

What is it and why is it there? Anne of Austria, wife of Louis XIII, commissioned the whole thing after the birth of her son in 1638 (the child went on to become Louis XIV, the Sun King). To her, the birth was a gift from God and this was her way of saying thank you. The queen had had several miscarriages, and her relationship with her husband was not good (he blamed her for at least some of the miscarriages). Mind you, they’d been married when they were both 14 when she barely spoke any French (she was half-Spanish, half-Austrian). Not a recipe for marital success.

The queen had prayed desperately to her namesake St. Anne for years, and finally, when she had reached the ripe old age of 37 and was close to giving up hope, she gave birth to a son. Rejoicing all round. Something this momentous demanded a suitable token of the queen’s gratitude, so she summoned the best architects in France and commissioned a Benedictine convent, complete with a domed church. Construction began in 1645. By this point, Louis XIII was dead, Louis XIV was only seven, and Anne was in charge, as Regent.* She used her new-found power to get the Val-de-Grâce built.

The original design was by Francois Mansart. He was later kicked off the job for going over budget (some things never change), but the building was completed following his plans. Perhaps the best way to appreciate the whole is to see it from above: the domed church, the courtyards, including the formally laid out beds in the main cloister, and the gardens to the east (that white cross in the gardens is a helicopter pad, by the way). 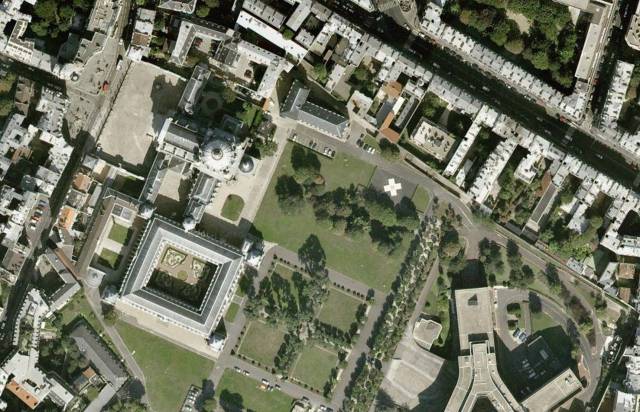 The day we visited, accompanied by two friends, the place was filled with sunlight bouncing off the warm golden stone inside and out. A few days earlier, the four of us had passed Sacré-Coeur with its deformed domes and had wandered in: it was gloomy and crowded and depressing. Here we had the place pretty much to ourselves and it was gloriously spacious and bright.

At the front of the church is a baldaquin like the one in St. Paul’s, Rome. This is a canopy over the altar with distinctive twisty columns, intended to represent the rustic stable in which Jesus was born. Mind you, this is the 17th-century take on “rustic.” Huge marble statues represent the Nativity scene, with a clearly delighted Mary and Joseph admiring their baby boy. The parallel is not subtle; the birth of Louis, as far as Anne was concerned, was on a par with that of Jesus.

Overhead, inside the dome, there is an elaborate painting, in which Anne of Austria and her patron, St Anne, can be seen. The queen is carrying a small replica of the Val-de-Grâce. It was so close to her heart that when her son was fully established on the throne and she no longer needed to act as Regent, she retired there to live. 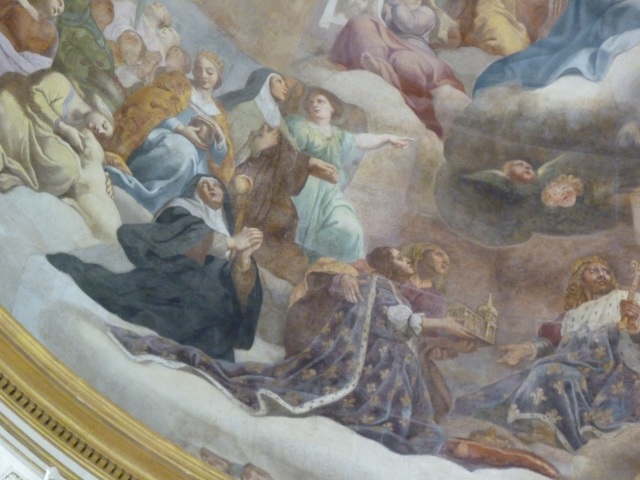 There is a splendid organ, and organ recitals are held once a month to show off the instrument.

Around the nave and under the ceiling are some lovely bas-reliefs. The marble floor features a great many fleur-de-lys and the initials A and L for Anne and Louis are everywhere. But wait a minute….would that be Louis XIII or Louis XIV? 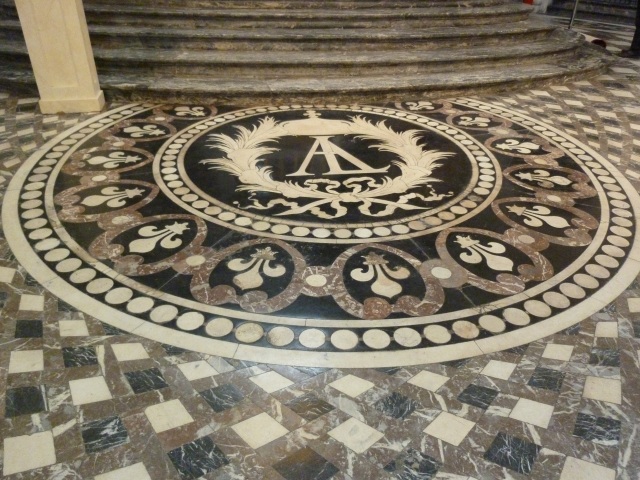 In 1793, during the Revolution, the Benedictines were evicted and the place became a military hospital. Considering its spaciousness and sense of calm, you could probably do a lot worse in the late 18th century if you were recovering from war wounds.

We wandered through the museum, founded during the First World War and filled with medical paraphernalia, from colourful faience apothecary jars to paintings of medics at work on the battlefield (think M.A.S.H., circa 1814) to some touchingly old-fashioned little displays with dolls taking the place of patients.

You’d need to be a medical fanatic to take it all in (we were flagging by the time we reached the section on tropical medicine), but it was oddly charming. There is something about seldom-visited museums on obscure subjects that makes one relax and slow down. (Philippa remembers a leisurely visit to a museum on the history of the lawnmower somewhere in England that produced the same effect.)

Finally, we wandered into the cloister, which surrounds a formal garden. Although there were security guards elsewhere in the building, the cloister was empty, and it seemed amazing to walk all by ourselves along this wide hallway with its memorial tablets to medics killed in the field. At one corner, we found a staircase going up to the library.

We like libraries, but have found that many of those in Paris are hard to get into (although we have been able to secure library cards for some of them), so we were surprised that a library in a military building was so easy to enter. It was quiet the day we visited, but presumably it is full of students during term time. The lucky students have their choice of a reading room with tables overlooking the main garden, or a sunny spot with comfortable chairs overlooking the cloister.

The whole ensemble is a wonderful antidote to the crowds that fill so many other historic spaces in Paris. Because the place is so quiet, the staff and guards actually seemed pleased to have us there, and readily answered questions. When Norman was trying to capture a picture of a staircase, it was the guard who suggested that he place the camera flat on the floor to shoot a picture straight upwards.

If you want somewhere to unwind in Paris, this could be the place. Take the RER to Port Royal, walk up the boulevard St-Michel to the rue du Val-de-Grâce, and you’ll glimpse the dome between the buildings. It’s open Tuesday, Wednesday, Saturday and Sunday from noon to 5 p.m. In any other city, this would be a must-see place on the tourist circuit, but in Paris, it’s a well-kept secret. Pass it on.

Parisian Fields is the blog of two Toronto writers who love Paris. When we can't be there, we can write about it. We're interested in everything from its history and architecture to its graffiti and street furniture. We welcome comments, suggestions, corrections, and musings from all readers.
View all posts by Parisian Fields →
This entry was posted in Paris art, Paris churches, Paris gardens, Paris history, Paris hospitals and tagged Anne of Austria, Francois Mansart, French army, Louis XIII, Louis XIV, Musée du Service de Santé des Armées, Paris libraries, St. Anne, Val de Grace. Bookmark the permalink.

8 Responses to Hiding in plain sight