I sometimes think that if I had it all to do over again, I would become a biographer. I’ve no interest in writing fiction when real life is so fascinating. Even in my day-job as a researcher, I love tracking down evidence and documents. Admittedly, my current work requires me to trace the path of water through a geographical region, which is a little less glamorous than documenting the path of an individual through time. But still.

I have written some biographical sketches, a few of which have ended up on Wikipedia. I completed a 100-page draft on a 20th-century American writer (the biography of a biographer, in fact). I have written biographies of my grandfather and great-great grandmother. Years ago, I wrote an undergraduate thesis in the form of a biography of an obscure botanist whose life revealed quite a bit about science education in 19th-century Nova Scotia.

But the book that sold me on the biographer’s life was Footsteps: Adventures of a Romantic Biographer by Richard Holmes, published in 1985. I found it in a second-hand shop years ago and have read and re-read it many times since. When he published Sidetracks: Explorations of a Romantic Biographer in 2000, I bought it brand-new, in hardcover, and started reading it on the streetcar on the way home. 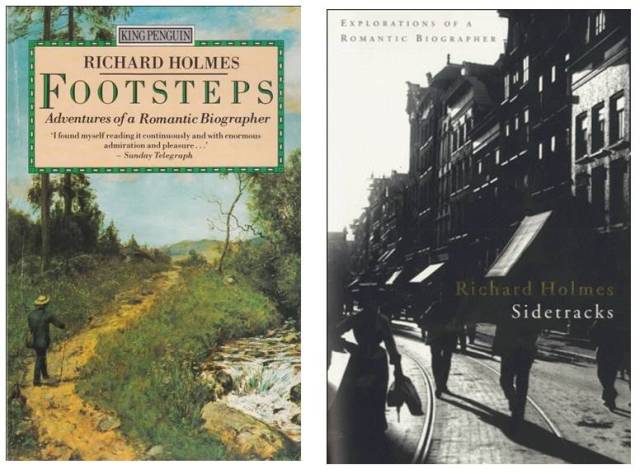 Holmes believes in tracking his subjects in space as well as time. He wants to stand where they stood and to see, as much as possible, what they saw. Some of his travels have been associated with major works of biography (Shelley, Coleridge), others with essays (Mary Wollstonecraft, Scott and Zelda Fitzgerald) or biographical fragments (Dr. Johnson and Mr. Savage).

I have tried this technique too when I can, and my efforts have led to explorations in places I might not otherwise have seen, not to mention new friendships and a few adventures. Such as the day that a companion and I set out in search of Mary Callery, the 20th-century American sculptor and art collector, visiting the places she had lived in Paris.

I had stumbled across Mary Callery in the course of research on the Villa d’Alésia, and written about her in October 2011. She owned a studio there, which she had lent to Henri Matisse and Fernand Léger.

The blog attracted quite a few comments: two writers also researching female artists, others who knew a bit about Mary, and best of all, an English writer called Lucie Brownlee, who had seen Mary Callery’s grave in Spain and wanted to create a fictionalized biography of her for a Ph.D. in creative writing. We corresponded for months and eventually met on a grey day in December 2012 for a trip through Paris in Mary’s footsteps.

We began with three addresses: 33 Quai Voltaire, the Villa d’Alésia, and a street in Boulogne-Billancourt. We had no idea what to expect, but we thought it was worth a try.

The Quai Voltaire address was an elegant building facing the Seine. Mary Callery was wealthy, after all. She did not create sculptures in unheated garrets. We wondered which floor she had lived on.

We spoke to a woman who was leaving the building. She mentioned Picasso, whose daughter Maya still lived there. We knew that Mary had been associated with Picasso, mainly as a collector of his works, but possibly also as a lover. The connection cheered us. We were on the right track.

At the Villa d’Alésia, we did not have a street number, so we began our search by asking for advice in the shop at the entrance to the street, which was run by an artists’ collective. The woman behind the counter suggested that we try the pottery studio, which we did. Someone there said that they thought the house next door might be the right one.

We rang the doorbell. A tall, grey-haired man opened the door. We said we were trying to find the studio once owned by Mary Callery. He looked at us thoughtfully for a moment. “You’d better come in.” As he turned to show us down the hall, Lucie and I looked at each other in excitement. Could it be…?

It was. The high-ceilinged studio at the back of the building was largely unchanged from Mary’s day. The walls were covered with pictures and there were striking pieces of stained glass on display. 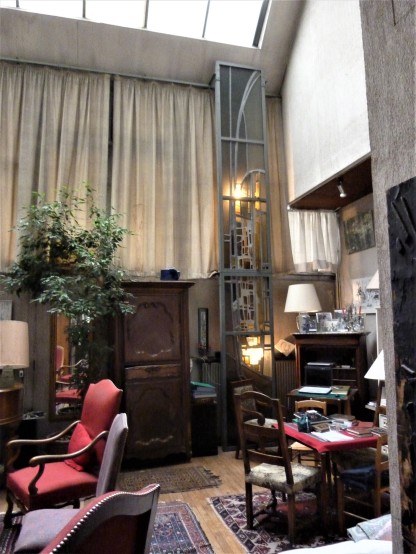 The current residents were kind and gracious. They showed us around and let us take photographs. We saw the courtyard at the back and even a big space in the basement used for storage and as a play space for the couple’s grandchildren.

Madame explained that her father had bought the building directly from Mary Callery in 1956. They even showed us the documents of sale. We saw another address there and made a note of it. 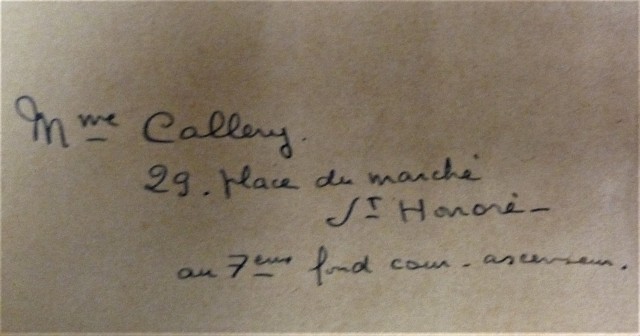 As we looked around, I felt that the stained glass looked very familiar. Where had I seen something similar before? Madame told us that her father had been Gabriel Loire, a stained-glass artist based in Chartres. Then I realized that every Sunday in Paris, I saw his distinctive work at St. George’s Church on the rue Auguste-Vacquerie. The coincidence pleased me, and suggested a potential sidetrack to follow one day.

We spent about an hour talking to the couple, who were delighted by our interest in the studio. Madame asked if I would like to read a book about Gabriel Loire and his work, and I bought a copy from her. We left in a state of euphoria.

After lunch nearby, we were still so excited that we got on the wrong bus, heading away from Boulogne-Billancourt. We caught our mistake, got off and turned around, and headed southwest, into the suburbs.

Again, we had no street number and this time, there was no-one to ask. It was raining and we tramped back and forth on the rue du Belvédère, speculating on which house might have been hers in the 1930s. 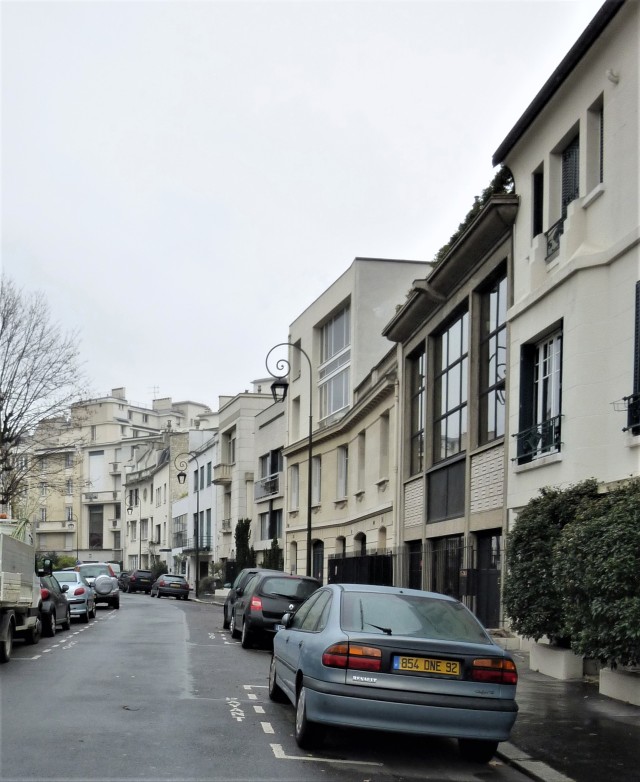 It appeared that this was another artists’ enclave. Signs here and there identified French artists who had lived and worked on the street (no mention of any American women artists). I spotted one about architect André Lurçat, brother of Jean Lurçat, the tapestry artist whose works I had seen in Angers…another potential sidetrack?

It was getting cold and we returned to central Paris, to the address we had been given by Gabriel Loire’s daughter: 29, place du Marché St-Honoré. Mary had lived on the 7th floor at the back. It was dusk and we hovered outside. A woman opened the courtyard door to leave the building. I held it for her and when she turned the corner, we scooted inside. We took a few photos in the courtyard, and decided there was really nothing more to see. As we were about to leave, a man was entering, and we asked him about Mary Callery.

Well! He exploded. We didn’t follow every detail of the tirade, in which the word “putain” figured prominently, but we gathered that by error or omission, she had caused a flood that had damaged other flats in the same building. This must have been in the 1960s, but to this man, it might as well have been last week. When his yelling had dwindled to muttering, we reeled out and headed back to our flat to tell Norman what we had found.

Lucie has now completed her book, and I look forward to reading it when it is published. She has followed Mary’s footsteps in Spain and the United States, met some of Mary Callery’s relatives, read Mary’s correspondence with Picasso and others. But for me, knowing that a studio Mary Callery once owned is largely intact and that her life crossed those of other artists who interest me gave me a sense of coming closer to her. Richard Holmes is right. You need to follow the footsteps and explore the sidetracks.

Here is a last picture of Mary (right) with her friend Georgia O’Keeffe (left). As it happens, we are going with friends to an exhibit of O’Keeffe’s work at the Art Gallery of Ontario. More connections, more footsteps.

Text and street photographs by Philippa Campsie. Photograph of St. Georges interior from the church website. Photographs of Mary Callery from various sources.

Parisian Fields is the blog of two Toronto writers who love Paris. When we can't be there, we can write about it. We're interested in everything from its history and architecture to its graffiti and street furniture. We welcome comments, suggestions, corrections, and musings from all readers.
View all posts by Parisian Fields →
This entry was posted in Paris art, Paris history, Paris streets and tagged André Lurçat, Boulogne-Billancourt, Fernand Léger, Gabriel Loire, Georgia O’Keeffe, Henri Matisse, Lucie Brownlee, Mary Callery, Pable Picasso, place du Marché St-Honoré, Quai de Voltaire, Richard Holmes, rue du Belvédère, St. George's Church, Villa d’Alésia. Bookmark the permalink.

14 Responses to Footsteps and Sidetracks