Life on the rue du Ranelagh

Posted on January 2, 2017 by Parisian Fields

By the time you read this, we will have returned from Paris, where we spent Christmas. Friends had graciously given us the use of an apartment on the boulevard Suchet in the 16th arrondissement.

“Ah, le seizième ! C’est un peu triste, n’est-ce pas ?” said a lady in a shop, when we mentioned where we were staying.

We knew what she was implying. The 16th is reputed to be little more than embassies and private streets, whole swaths of it closed off by iron fences and digicodes, automatic garage doors and frosted glass panels.

But as we walked along the rue du Ranelagh to and from the Metro or the bus, we saw plenty of life, too. Shopkeepers, students, dog walkers, movers and delivery people, parents with kids in strollers or on scooters, and, yes, expensively groomed women in fur coats, men in formal business attire, and plenty of gardiens. 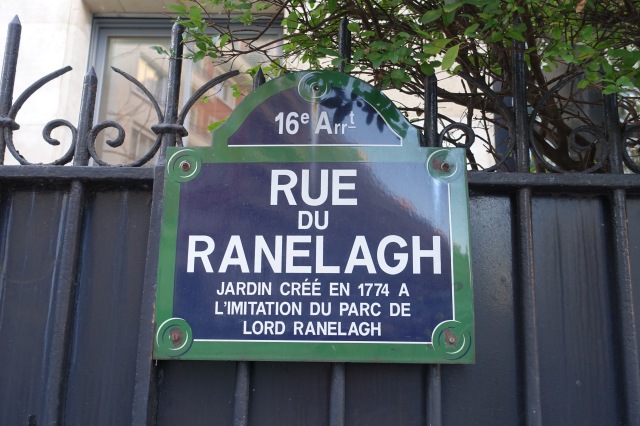 Rue du Ranelagh would never make it onto a short list for the “Only Street in Paris” (the name of an enjoyable book by Elaine Sciolino). It is not a street that captures a little world; it is neither unique nor typical. Parts are attractive, parts are banal, and some bits are downright peculiar. But it is far from triste.

Let’s start with the name. When Philippa lived on the rue du Ranelagh as a student, she had a vague idea that it had been named for an Irish notable. Wrong. She should have noticed the all-important “du.”

If the street had simply been named for a person, the word “du” wouldn’t have been there. (See note on Paris street names below.) Rather, it is the street of the Ranelagh, and the name does not denote a person, but is an eponym for a pleasure garden. Such a garden had been established in 1742 in Chelsea, London, on land that had belonged to a Lord Ranelagh, and his name became associated with the place.

The creation of the Paris version in 1774 is attributed to someone called Morisan (nobody seems to know his first name). He is usually described as a “garde” at the Porte de Passy, but he was more than a gardien. Clearly he had the resources and connections to enclose some land belonging to the maréchal de Soubise, build a café, a restaurant, and a “salle de spectacle,” all of which were sufficiently upscale to attract the highest in society, including Marie-Antoinette. (Dances were held on Thursdays; this implies a clientele that does not work on Fridays.)

Morisan originally called it the “Petit-Ranelagh,” but dropped the “Petit” when the place became successful. It had a checkered career during the Revolution, but revived for a while in the first half of the 19th century, again, on Thursday nights. At this point, men paid three francs to enter, women paid one franc. According to an account from the 1840s, this was a good sign – one should avoid places in which women were admitted free.

Today, les Jardins du Ranelagh is the name of a park near the Musée Marmottan on the western edge of the city. There are rides for children (ponies included), marionettes, and a statue of La Fontaine, complete with renard, corbeau, et fromage.

The rue du Ranelagh lies south and east of the gardens, and spans the area between the old Petite Ceinture and the river.

Each day, we would approach the street from its farthest western point, crossing the route of the Petite Ceinture, which at this point is a nature trail in one direction and a dog-walking path in the other. 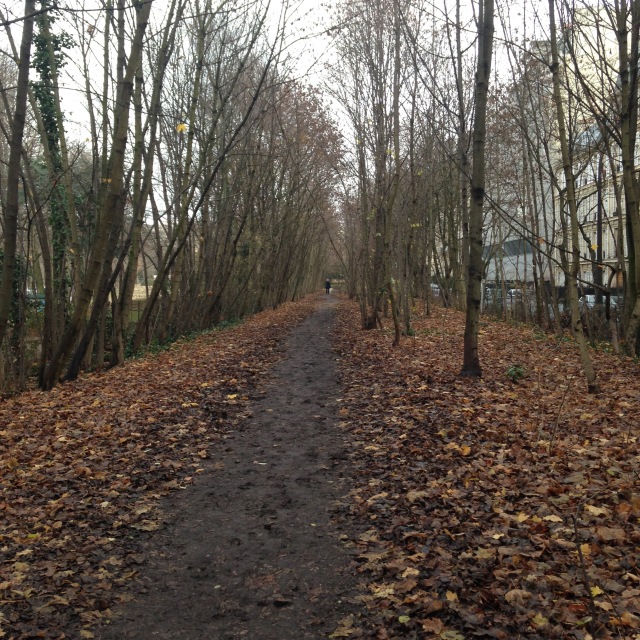 Some of the old rails are still visible.

When the railway was still running, there was a rickety-looking passerelle (footbridge) going up and over the line at this point. 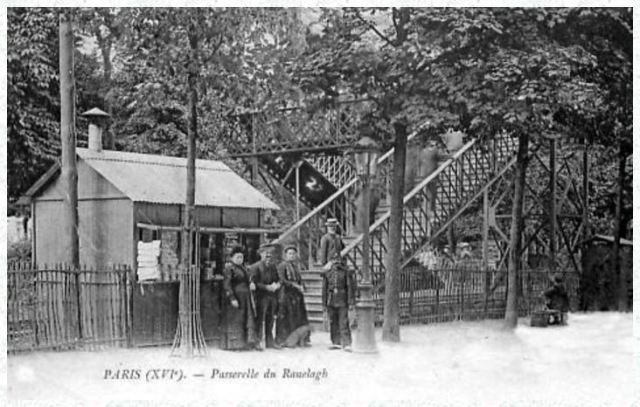 Emerging from this strip of greenery, one is confronted by two huge buildings on either side of the rue, positively writhing with sculptures on their facades, one surmounted by a ludicrously high top that serves no apparent purpose; the other by a tower with a crest that is probably fanciful.

Facing these imposing residences across the Boulevard Beausejour (which parallels the railway right-of-way) is a structure the size of a detached garage, squashed between the road and the Petite Ceinture … La Cabane du Smartphone. Improbably enough, it appears to be a going concern. It commands a splendid view straight down the rest of the rue du Ranelagh.

The juxtaposition suggests that the rue du Ranelagh does not take itself all that seriously. A few steps farther on are a convenience store, a tailor shop, an interior design company, and a Sicilian restaurant. Commerce flourishes among the mansions.

This stretch of the street was the last to be developed, since it was at the outermost edge of the city. It includes several large detached houses, the late 19th-century equivalent of nouveau-riche suburban monster homes, built by people with pretensions. 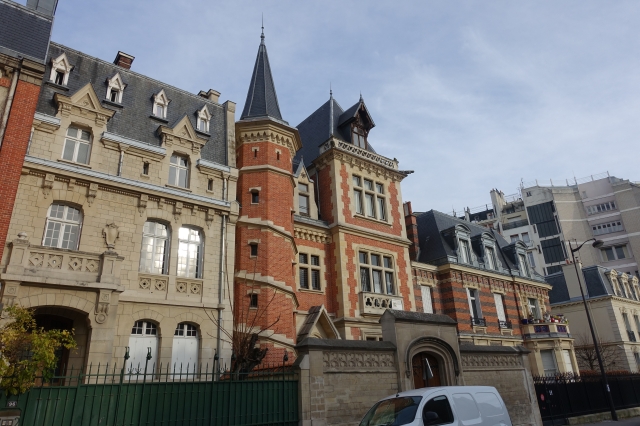 The most eye-catching, a brick castle with a turret, shown above, is now the embassy of Suriname (hands up all those who would need Google to locate that country). Another is the embassy of Slovakia.

We were more interested in an anonymous house we passed. There is a blue rope leading from the iron fence at the street to the front door. Did it allow visitors to ring the bell without entering at the gate? Was it a crude mobility assistance device? At first, we never saw any lights after dark, but one evening the top floor was illuminated. Madwoman in the attic? A servant looking after the place? We had all kinds of theories. 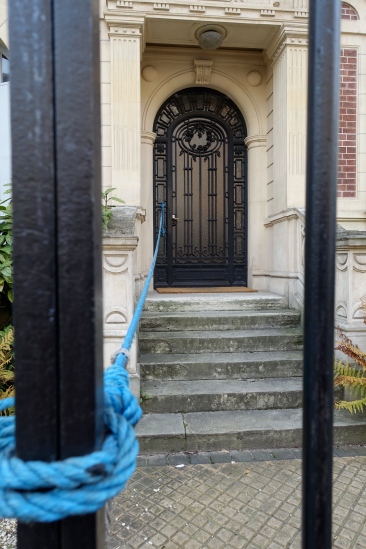 At the corner of the rue du Ranelagh and the avenue Mozart, there are all the necessary shops – boulangerie, fromagerie, boucherie, poissonerie, wine shop, pharmacie – as well as a Metro entrance. The bustle here is the same as one would find anywhere on a commercial street.

A little farther on we pass a florist, where we bought a Christmas rose for friends, and the Lycée Molière, originally established as a lycée for “jeunes filles” in the 1880s, one of five established for young women only. It is co-ed now, but we were impressed by its origins.

Opposite the lycée is a woodworking business (ébenisterie). When we looked in, we saw a young woman efficiently restoring an old chest of drawers. 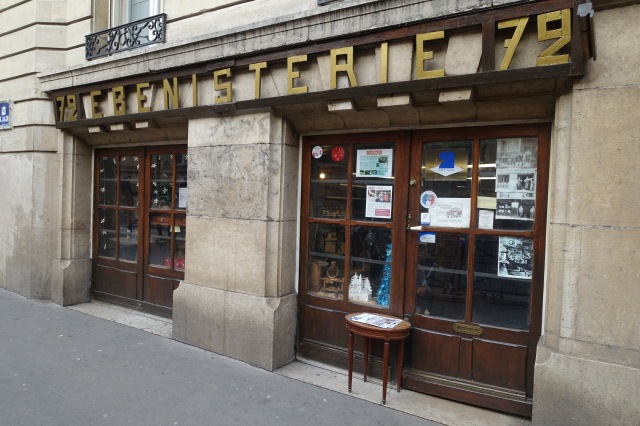 Another business, which we found weirdly fascinating, was the permanent make-up shop. It may be busy at other times, but when we passed we never saw anyone taking advantage of the facilities, which resembled a cross between salon and surgery.

In this part of the rue du Ranelagh, many buildings date from the 1950s or later. Their facades are forgettable, but many seem to have one delightful feature: at ground level there is glass on the street and the garden side, so passers-by can look through into the interior gardens. What a contrast to the hidden gardens of the older buildings! How very Republican. Liberté, égalité, visibilité. No more separation between inner and outer landscapes.

Most of the buildings have underground garages with sloping entrance ramps, but one day, we were amazed to see a door open and a car drive onto a car-sized elevator that would take it to its designated floor. We weren’t in time to photograph the interior, but here are the doors.

From the rue Raynouard east, the street descends towards the Seine, with the huge bulk of Radio France on the south side, made even bulkier by the paraphernalia of ongoing construction and renovation. We were interested to discover that before Radio France, this was the site of the usine à gaz de Passy.

At the river’s edge is a commuter train station named for avenue Président Kennedy, a gas station, and a graffiti-adorned car wash so small that it could be a pop-up. Norman saw a model of an Alfa Romeo there that he had never seen before. The car wash and gas station obscure the view of the river from the bus stop, where we would wait for a No. 70 to take us to the Musée Valentin Haüy, where Norman is pursuing his research.

After doing this walk backwards and forwards for more than a week, we concluded that the 16th was far from triste. It is a lively part of the city, not all of it hidden behind digicodes. But it takes some time to reveal itself.

Note on Paris street names: Streets are named for people, places, or things. In general, for a person, the proper name appears alone (avenue Mozart, rue Mirabeau). For a place name, it takes the particle de (rue de Rome, rue de Bretagne). For a thing (which might be a date or event), it takes the particle plus the article, that is, du, de la, de l’, or des (rue de l’Assomption, avenue des Peupliers).

There are exceptions, of course: sometimes a name includes a particle (rue de Tocqueville), and a name with a title or honorific is treated as a thing (avenue du Président Kennedy, rue du Docteur Blanche). Some names, like Ranelagh, are eponyms and therefore things. Masculine place names take the article (place du Canada) and sites such as former suburbs or gates are treated as things (rue du Faubourg St-Jacques, place de la Porte Saint-Cloud). Sometimes you just have to know whether a word is a name or a thing: rue Jasmin refers to a person with that name, not a flower, for example.

Text and original photographs by Philippa Campsie and Norman Ball

Parisian Fields is the blog of two Toronto writers who love Paris. When we can't be there, we can write about it. We're interested in everything from its history and architecture to its graffiti and street furniture. We welcome comments, suggestions, corrections, and musings from all readers.
View all posts by Parisian Fields →
This entry was posted in Paris history, Paris parks, Paris streets and tagged avenue Président Kennedy, Elaine Sciolino, gasometer, La Cabane du Smartphone, Lycée Molière, Marie Antoinette, Morisan, Paris street names, Petit Ranelagh, Petite Ceinture, Radio France, rue du Ranelagh, usine à gaz de Passy. Bookmark the permalink.

19 Responses to Life on the rue du Ranelagh