Pippa, Pouch, and a Paris Publisher

We don’t usually make a big deal of birthdays. Norman’s falls in late winter just as the academic term is winding up. Philippa’s falls in early summer, just as everyone is going away. This year we were in Paris for the latter occasion. At one point we contemplated dining in a grand restaurant and or visiting some major attraction, but in the end, we just walked up the boulevard St-Jacques, stopping for lunch at Au Port du Salut, at 163 bis.*

We then wandered on to a bookshop-gallery at 25, rue du Sommerard called, appropriately, Pippa (since Pippa is the short form of Philippa’s name, used by family and old friends). The previous week, at a poetry market in the Place St-Sulpice, we had seen someone with a bag on which was printed the bookshop name and had decided that this would make a good birthday destination. 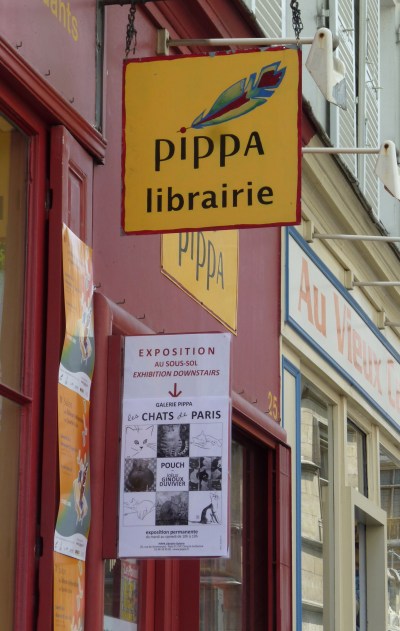 First, we asked about the name Pippa. The owner told us that the word meant a Chinese stringed instrument rather like a lute (more often spelled pipa). We never did find out why she chose it, though. And the logo is a feather, not a musical instrument.

Meanwhile, we had noticed another familiar name. The gallery in the basement was showing works by the illustrator and cartoonist François Pouch. As it happened, we already owned one of his engravings. 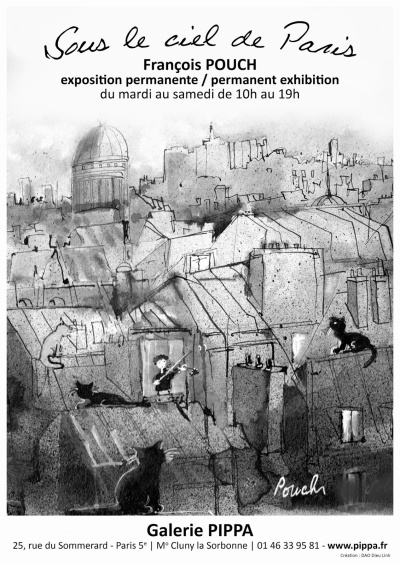 Flashback to, oh, about 2005 or so. We were staying in the Marais and had taken a walk along the Canal St-Martin on a Sunday afternoon, when we came across a little open-air arts and crafts market. As we were admiring some pen-and-ink cartoons, an enormous gust of wind flattened several displays, including the one we were visiting. We immediately set to work helping the stall-holder reassemble the stand and clear away some broken glass from framed pictures that had fallen on the cobblestones. We chatted to him and ended up buying one of the unbroken pictures, an engraving by Pouch. (The glass later shattered inside Philippa’s suitcase on the way home to Canada.)

We’ve enjoyed the picture ever since – of a musician parking his modest bicycle at the bottom of a flight of grand stairs into an baroque opera house with over-the-top decoration. Pouch does a lot of images of musicians.

Flash forward again to 2014, and here are more of his pen-and-ink cartoons, with musicians and cats and rooftops. So there was the question of a birthday present settled (an original pen-and-ink work featuring all three), and we bought some books as well. Of course. Our plans to reduce the number of books in our lives always come to naught.

Librairie Pippa sells books by small and independent publishers, including its own line of poetry, children’s books, and travel books. We picked out several of these, as well as some wonderful facsimiles of 18th and 19th-century books by a publisher called Maxtor.

We struck up a conversation with the owner, Brigitte Peltier, whose husband, André Arnold-Peltier, is a photographer who has contributed to many of the travel books. Brigitte is an editor and publisher who founded Pippa Editions in 2006 and the bookshop in 2008. Like Philippa, she had worked in publishing companies for years before striking out on her own.

It is encouraging to see a new bookshop in the Latin Quartier, where bookshops more often close than open. According to a 2011 article in Le Point, 70 bookshops in this area closed between 2003 and 2008 (we have noticed closures in other quartiers as well).

The main problem is, as always, rising rents vs. ever-narrowing profit margins. The area is becoming trendier and bookshops are being replaced by designer boutiques. Many publishers have moved to the suburbs. After all, fewer university students frequent the area around the old Sorbonne buildings since the Université de Paris was decentralized to campuses throughout the region. And those who remain buy fewer books. Meanwhile, in the cafés, the students who used to make a single drink last all evening as they argued over existentialism are being replaced by tourists.

Nevertheless, the quartier is still a centre for bookselling and a few publishers remain. There are 255 bookshops (down from about 340 ten years ago, but still a good showing compared to other cities). And you can now search their holdings through a single website. The site also lists all 300 bouquinistes by name and includes them in the search function, which strikes us as a lovely mixture of traditional and contemporary methods of bookselling.

We are happy to report that one of those in the forefront of support for the Latin Quarter book trade is Toronto-born: Brian Spence, of the Abbey Bookshop on the rue de la Parcheminerie, celebrating its 25th anniversary this year.

Brigitte, too, works hard to promote publishing and bookselling, through the Salon des éditeurs indépendants du Quartier Latin, held in June (alas, we left Paris the day it opened). 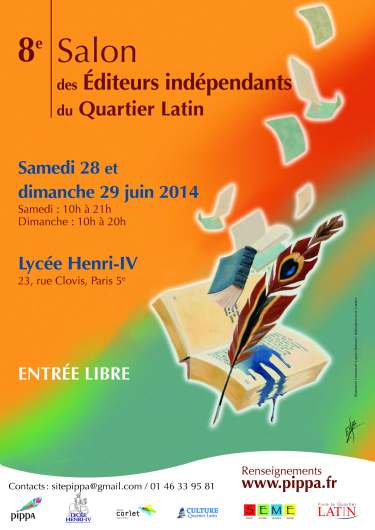 And as if that were not enough, Brigitte explained that some of the bookshop profits go to a charity that she founded, called SEME – Santé Etudes Musique Espoir (Health Study Music Hope). SEME supports young people in India, Africa, and Vietnam – she mentioned, for example, helping a young woman in Pondicherry, India, train as a nurse. Doesn’t that just make you want to go out and buy more books?

Note that the shop is closed between July 11 and August 19, 2014. Even booksellers need time off.

* We don’t do restaurant reviews, but if we did, we would give this small restaurant as many stars as we were allowed to give. We particularly recommend the “formule de midi” – the set-price lunch menu at 19.50 Euros. Given the genius of the chef, Marius Arranz, this is a stellar example of what the French call “un bon rapport qualité/prix” (good value for money). Michelin describes it as “une cuisine semi gastronomique à base de produits frais.” We’re not sure about the “semi gastronomique” – it seemed wholly gastronomique to us – but we can vouch for the fresh ingredients.

Parisian Fields is the blog of two Toronto writers who love Paris. When we can't be there, we can write about it. We're interested in everything from its history and architecture to its graffiti and street furniture. We welcome comments, suggestions, corrections, and musings from all readers.
View all posts by Parisian Fields →
This entry was posted in Paris shops and tagged Abbey Bookshop, André Arnold-Peltier, Au Port du Salut, Brian Spence, Brigitte Peltier, Francois Pouch, Latin Quarter, Librairie Pippa, Marius Arranz, Maxtor, Quartier latin, rue du Sommerard, Salon des éditeurs indépendants du Quartier latin, SEME Santé Etudes Musique Espoir. Bookmark the permalink.

4 Responses to Pippa, Pouch, and a Paris Publisher