Curiosity, plus an interest in Paris, has led us to many surprising finds and some unusual encounters. A recent purchase at the Toronto International Antiquarian Book Fair is a case in point.

It was a one-of-a-kind object: a handmade, illustrated, unbound book dated 1934, titled La Mode Féminine, dedicated to the School Sisters of Notre Dame by one Stewart Monaghan. Here is the description from the vendor, the Kelmscott Bookshop of Baltimore:

This unique item is a compilation of sixteen handwritten poems written in the 18th century about women, each illustrated by a pretty hand-colored original drawing of a woman in the attire of the period…. A charming item, although Mr. Monaghan’s reasons for creating and dedicating it to the School Sisters is unknown.

The handmade book was held together by boards covered in mauve cloth, edged with black lace, with pink ribbon closings. Not the sort of thing that one would expect to be dedicated to an order of nuns by a man. There had to be a story there. 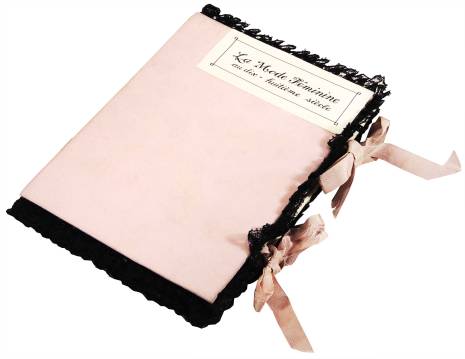 When I got home, I entered the name “Stewart Monaghan” into ancestry.com, the genealogical website. The name appeared in a record from the 1930 census of the United States. Stewart Monaghan was listed as the grandson of one Cora Stewart of Baltimore, living on Guilford Street.

That made sense: the bookshop was in Baltimore, and the book itself was preserved in a cardboard box labelled Hutzler Brothers Co., a department store in Baltimore that was a fixture from 1858 to its closure in 1990.

I Googled the head of the family, Cora Stewart, on Guilford Street in Baltimore. Her name appeared in a number of articles in the Baltimore Sun written by the columnist Jacques Kelly, who was clearly a descendant of Cora’s. I sent him an e-mail.

Bingo! Jacques Kelly responded within a few hours and explained why Stewart Monaghan had created a book dedicated to an order of Catholic teaching nuns:

Let me clear up the mystery of Stewart Monaghan. Her full name, as christened, was Margery (it sometimes appeared as Marjorie) Stewart Monaghan, my mother. She hated Margery or Marjorie and NEVER used it. Stewart was her mother’s maiden name. She was an adored child and an adored adult. Her married name was Kelly and as “Stew” Kelly she was known by the cardinal-archbishop, governor and mayor.

She was born Sept. 23, 1917, and spent 16 years, first grade through college graduation in 1939, with the School Sisters of Notre Dame in Baltimore, now called Notre Dame of Maryland University. … How such a document escaped her clutches is a miracle as she saved everything, down to homework assignments of all her six children.

There is a lesson in there about the trustworthiness of census results. And about gender roles. It is hard to imagine a young man in the 1930s creating such a book and dedicating it to a group of nuns; but quite easy to imagine a teenaged girl doing the same thing.

My next question was about the inspiration for the book. The fashion plates were stylish, and it seemed improbable that a 17-year-old girl would have the knowledge and artistic gifts to create such drawings from scratch.

In fact, they were copies or tracings. La Mode Féminine was a series of historic fashion plates, printed in Paris using the labour-intensive pochoir process (also favoured by George Barbier), and published in 1929. The creator was Henri Rouit, art director of the fashionable revue Art-Goût-Beauté.* Sets of his little books are still available on eBay and used-book websites; indeed, the complete set was sold at auction on November 12, 2013 (the starting price was 400 Euros). I, ahem, did not bid.

I wonder how Stewart came across the French fashion plates. They had been published only five years before she created her own book; in those days that was quite a rapid transfer from France to the United States. Did her family own a set? Did the convent library contain images of women in fetching hats and décolleté gowns? Did she see only the 18th-century plates, or did she have access to the full set (which ranges from the 15th to the 20th century) and choose these images specifically? I will never know. 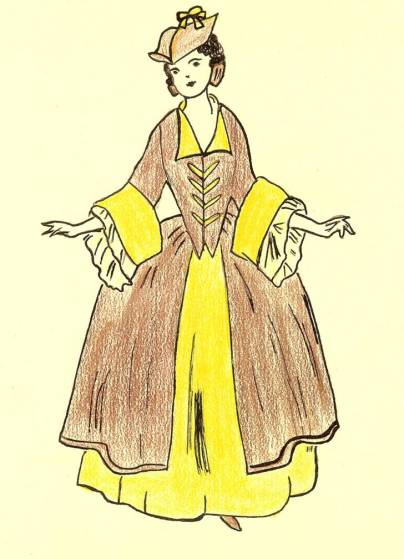 The poetry ranges from courtly poems to romantic ballads to lover’s complaints. It is interesting to imagine this convent-schooled young woman choosing these 18th-century lyrics to go with her French fashion plates. The first one is an excerpt from The School for Scandal by Richard Sheridan. The one shown below, by Oliver Goldsmith, has an unexpected ending. I’m beginning to think that the School Sisters of Notre Dame were not your average teaching nuns.

Thanks to Jacques Kelly, I know how the story turns out. Stewart went on to university, graduating with a master’s degree, became a social worker, and in 1949, married newspaper writer Joseph B. Kelly and had six children: four girls, two boys. She lived all her life in the house on Guilford Street in which she grew up. She sounds somewhat larger than life and full of energy and interests. In a 2009 column, Kelly wrote:

She was made to order for Baltimore because of her lack of pretense and her love of people, whom she cultivated by the hundreds. She was a great worker of the telephone – her calling hour began about 9:30 at night and was accompanied by clouds of Lucky Strike cigarette smoke. Using a clipboard, she was a letter and note writer and could say much in few words. She wrote quickly and kept the impressions coming. Alongside her telephone-tobacco chair was a pile of murder mysteries, many from the Pratt Library.

She sounds like someone I would have enjoyed meeting. She died in 1993, aged 75, never having visited France. 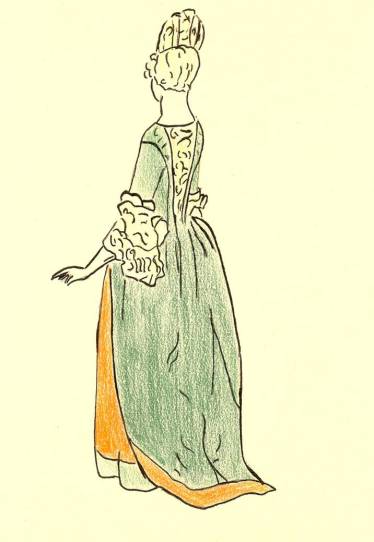 Chances are, she forgot all about the little book she made for her teachers at the convent. It probably sat in a drawer or bookcase until someone did a clear-out and sent it, probably with other books, to the Kelmscott Bookshop, whose owners brought it to Toronto. Now it is part of my library, complete with provenance, “unknown” no more.

*The journal had several names throughout its life. First (1920-21), it was called Les Succès d’Art. Goût. Bon Ton. Briefly, it was Art. Goût. Bon Ton. Finally, from 1921 to 1930, it was called Art. Goût. Beauté. Throughout these changes, the initials (AGB) matched those of the publisher – who was actually a silk merchant: Albert Godde, Bedin and Company. For more information on this publication, I recommend an article by Patricia Morris in the California State Library Foundation Bulletin.  Otherwise, not much is known about Henri Rouit. I may have to investigate.

Parisian Fields is the blog of two Toronto writers who love Paris. When we can't be there, we can write about it. We're interested in everything from its history and architecture to its graffiti and street furniture. We welcome comments, suggestions, corrections, and musings from all readers.
View all posts by Parisian Fields →
This entry was posted in Paris art and tagged Albert Godde Bedin, Art-Goût-Beauté, Baltimore Sun, Cora Stewart, Henri Rouit, Hutzler Brothers, Jacques Kelly, Joseph Kelly, Kelmscott Bookshop, La Mode Féminine, Richard Sheridan, School for Scandal, School Sisters of Notre Dame, Stewart Monaghan, Toronto International Antiquarian Book Fair. Bookmark the permalink.

11 Responses to A little mystery solved