We’ve been asked many times why we decided to spend Christmas in Paris this year, and we have all kinds of answers. “We didn’t want to do another turkey.” “We thought it would be fun to spend Christmas just the two of us away from family,” and so on. But to be perfectly honest, it was Rudolf. And his buddy Frosty. And all the rest of his ilk, including overexcited tenors singing “O Holy Night” in throbbing tones.

We’d planned our getaway early in the year, but the minute the Toronto shops started playing Rudolf the Red-Nosed So-and-so and Frosty the Frigging Snowman, we knew we’d made the right decision. This was early November, as soon as the Halloween decorations came down.

The French don’t make a fetish of Christmas. It’s a short, enjoyable holiday, not a way of life. We tried to explain to someone in French that in North America there are year-round shops devoted to Christmas; the response was a look of utter incomprehension.

As of December 23, the French are still buying their Christmas trees, which they will decorate on Christmas Eve and remove shortly thereafter (unlike many North Americans, who keep their decorations up until March). Here is a pile of Christmas trees waiting for buyers on a Paris sidewalk.

Decorations vary wildly, from a perfunctory wisp of tinsel in the entry of an apartment house to an over-the-top effusion that takes over an entire store…

…from the exuberance of the Champs Elysees, brought to you by a host of corporate sponsors…

…to the fearfully tasteful arrangements in the Place des Vosges. 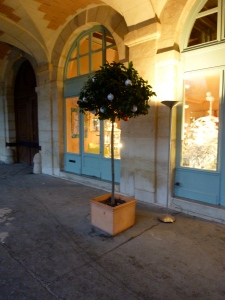 A particularly popular effect is a little stuffed Santa tryng to crawl in a window (this is from the Cochin Hospital).

The flower shops sell all kinds of arrangements to take home, including a reindeer head like a hunting trophy from the Musee de la Chasse et de la Nature (except that the reindeer looks like an oversized mouse with antlers).

As for the auditory environment, we are happy to report that Le Bon Marché does not play carols or Christmas songs (except outside near its postmodern, highly conceptual Christmas windows), and the Bazar de l’Hotel de Ville has rather ironic blues versions of Jingle Bells and other standards. But, thank God, no Rudolf and no Frosty.

The plan is working.

It may be a white Christmas in Paris this year, but the Parisians themselves don’t really care one way or another, as long as it doesn’t interfere with the real business of the season…eating oneself into a stupor in the company of one’s nearest and dearest. Or one’s family. As long as the boudin* is blanc, the landscape can be any colour.

And so, it appears can the bûche de Noël.

This afternoon the bus heading to the Gare de Montparnasse was jammed with people lugging enormous suitcases, but everyone was in a good mood. They’ll be home for Christmas. There will be oysters and goose and bûche de Noël for everyone. Everyone will be in good humour, not having been force-fed a diet of Christmas carols for two months like a Strasbourg goose being force-fed corn.

We wish we could spend every Christmas here.

*Boudin is a type of pork sausage, and the pale version called boudin blanc is popular at Christmastime, although some people prefer boudin noir, which is blood sausage.

Parisian Fields is the blog of two Toronto writers who love Paris. When we can't be there, we can write about it. We're interested in everything from its history and architecture to its graffiti and street furniture. We welcome comments, suggestions, corrections, and musings from all readers.
View all posts by Parisian Fields →
This entry was posted in Paris food, Paris hospitals, Paris music, Paris popular culture and tagged Bazar de l'Hotel de Ville, Bon Marche, boudin blanc, Champs Elysees, Christmas decorations in Paris, Christmastime in Paris, Hopital Cochin, Musee de la Chasse et de la Nature, Place des Vosges. Bookmark the permalink.

1 Response to A Rudolf-free Noel