How to Make a Surprisingly Enduring Film

It’s not the best movie ever made in Paris. Nor is it the best movie made by either of its stars or its director. And yet, with its stylishness and wit, it remains watchable when so many other movies from the 1960s seem hopelessly dated. 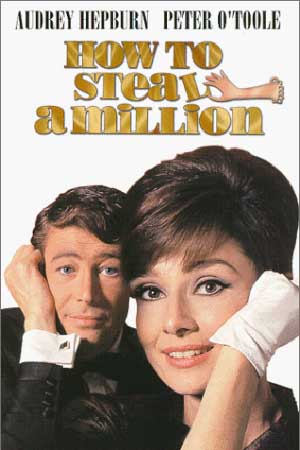 I am talking about How to Steal a Million, 1966, directed by William Wyler and starring Audrey Hepburn and Peter O’Toole.

For one thing, of the various movies that Audrey Hepburn made in Paris (such as Funny Face, Love in the Afternoon, Charade, or Paris When it Sizzles), she finally got to act with someone close to her own age. Fred Astaire, Gary Cooper, Cary Grant, and William Holden were all much older than she was; but with Peter O’Toole she had a believable love interest.

For another, the movie doesn’t try to be more than it is – an enjoyable romp. There is no violence (as in Charade) or singing and dancing (as in Funny Face) or hectic fantasy (Paris When it Sizzles) or torrid affair (Love in the Afternoon) to spoil the enjoyment. It’s just an amiable caper – a heist that is not really a crime, with some light-hearted romance woven in.

The plot is quite simple. Audrey plays Nicole Bonnet, the daughter of a gifted art forger, Charles Bonnet. Charles Bonnet makes the mistake of lending a forged sculpture of Venus to a famous museum for a blockbuster exhibit. Meanwhile, a specialized art detective called Simon Dermott (O’Toole) is closing in on Bonnet. Nicole surprises Dermott one night when he sneaks into the Bonnet mansion to take a paint sample from a forged Van Gogh. She assumes him to be a burglar.

When the museum tells the Bonnets that the sculpture must be subject to expert scrutiny before it can be insured, Nicole contacts the man she thinks is a professional thief to help her steal it back. Dermott is falling for her, so he agrees to help her.

The small statue is protected by a sensitive burglar alarm and Dermott conceives a plan to set off the alarm repeatedly, until the guards assume that it is malfunctioning and turn it off. The plan works. Dermott grabs the statue. Dressed as a cleaning lady, Nicole smuggles it out of the museum in a bucket. Dermott sells the statute to an eccentric collector who agrees never to display it in public. Then he and Nicole head off in his pale yellow E-type Jaguar to live happily ever after.

Audrey Hepburn was happy to work again with director William Wyler, who had brought her to fame in 1953 in Roman Holiday (another delight, but with another older man). For his part, Peter O’Toole was hoping for a break from the intensity of his previous films, Lawrence of Arabia and Becket. In preparing for How to Steal a Million, he watched Cary Grant movies to get the hang of the debonair man-about-town character. 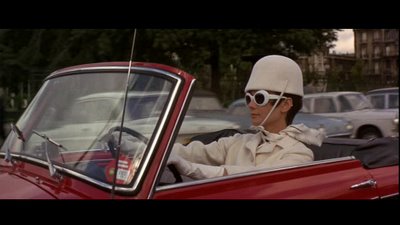 Although the movie starts with an auction, followed by the delightful sight of Audrey dressed in head-to-toe white Givenchy, driving a tiny red Italian convertible (Norman tells me it is an Autobianchi Eden Roc) across the Pont de la Tournelle, the first scenes to be filmed were, in fact, those in which Audrey and Peter are scrunched up in a museum broom closet as they carry out the heist. 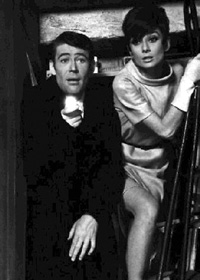 This part of the film took eleven days to film, and according to one of Audrey’s biographers, the two stars kept getting fits of the giggles and spoiling take after take by laughing.

Fortunately for everyone’s nerves, the film was shot on the “French schedule.” In Los Angeles, filming starts at 9 a.m. or earlier and usually wraps up in the early evening, with a break for lunch, largely so that the technicians involved can keep regular hours. In France at the time, filming never began before noon and continued until 7:30 without a break, to allow for a civilized dinner at 9 p.m. William Wyler found this arrangement congenial and added, “Who can play a love scene at nine o’clock in the morning?” No doubt O’Toole, a notoriously heavy drinker, also appreciated the schedule.

Audrey never drank on the job, but at one point the weather turned chilly during an exterior shoot, and O’Toole offered her some brandy. The next scene called for her to roar off in the Autobianchi, which she did, knocking over several large lamps and sending the lighting crew diving for cover.

This scene took place outside the museum in which much of the action takes place. It is, from the outside, the Musée Jacquemart-André at 158, boulevard Haussmann. In the film it is called the “Musée Kléber-Lafayette.”

The interiors are a different story. They were constructed on the studio lot at Boulogne-Billancourt. The set designer, Alexander Trauner, who lived in Paris, contacted several Paris painters to create the “masterpieces” that line its walls. For $100,000 he amassed a collection of fake Renoirs, El Grecos, Goyas, Rembrandts, Rubenses, Van Goghs, Monets, Cézannes, Tintorettos, and Picassos. For another $50,000, he bought authentic antique frames. The fake artwork was so attractive that real thieves helped themselves to several objects during the filming.

While in Paris, Wyler took a house on the rue Weber, where he and his wife could entertain. Audrey Hepburn stayed at the Hotel Raphael (returning to her family in Switzerland on weekends), and O’Toole bunked at the Hotel George V. But the hotel featured in the movie was the Ritz, where Dermott stays while investigating Charles Bonnet. When Nicole finds out he is there, she figures that he must be a very successful burglar indeed.

They begin to plan the heist at the hotel, in a scene in which Audrey wears a black lace Givenchy number with black lace stockings, a black lace eye veil, and glittering silver eye shadow. Peter O’Toole’s character does a double take when he sees her. (That dress later sold at auction for £600,000.) More of the plotting takes place in the gardens beside the Champs-Elysées. Another scene takes place in Maxim’s, where the eccentric millionaire, played by Eli Wallach, tries to woo Nicole Bonnet.

(A sidelight: The part of the millionaire was first offered to Walter Matthau, but he wanted too much money, and then to George C. Scott, who failed to show up on set when he was needed and was fired. William Wyler settled on Eli Wallach, who was both affordable and dependable.)

The other important location is the Bonnet mansion, a three-storey, nineteenth-century pile with a large forecourt, and a double staircase leading up to the front door. Where is it? It took me a while to find out, until I discovered that when Peter O’Toole puts Audrey Hepburn in a taxi and tells the driver to take her home to “38 rue Parmentier,” that is, in fact, the address – in Neuilly. Today the house has disappeared, replaced by an apartment block. The wall and the gate of the forecourt are still visible, however. 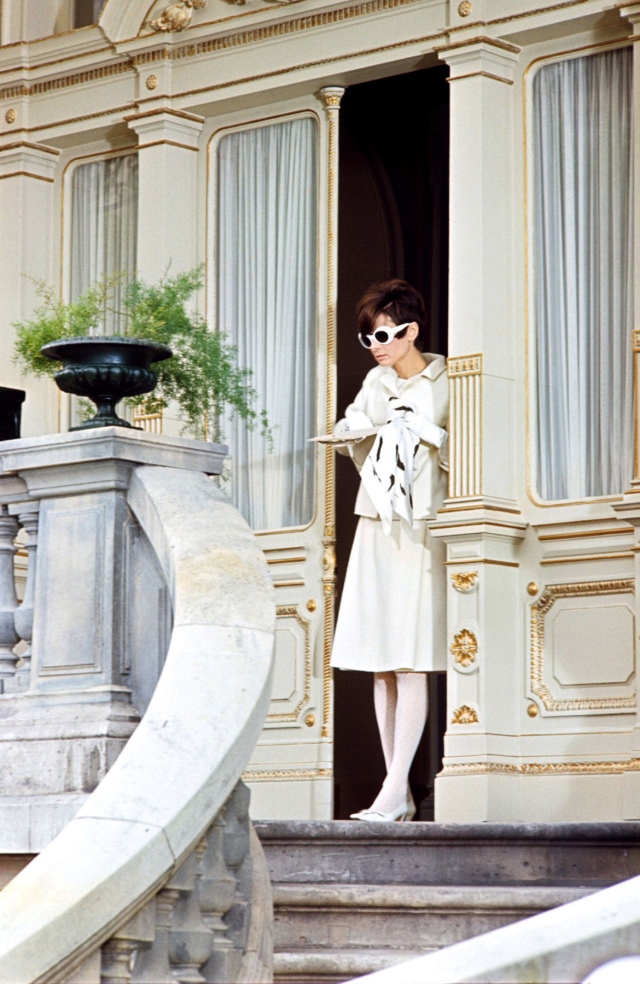 The film’s capable supporting cast included the Welshman Hugh Griffith as the Frencher-than-French Charles Bonnet, the notable French actor Charles Boyer as a gallery owner, and a comical character known only as “Moustache,” playing a museum guard. The chirpy soundtrack is credited to Johnny Williams, who turns out to be John Williams, of Star Wars fame.

When it was released, the movie received only lukewarm reviews. It was derivative (the critics sneered). It was not even funny. It was time Audrey Hepburn stopped playing ingénues. Time has been kinder to How to Steal a Million. I must have seen it a dozen times, and it always delights.

Acknowledgements: Thanks to Michael Schurmann, author of Paris Movie Walks, who identified the museum in the movie as the Musée Jacquemart-André. His book is a useful guide to movie locations throughout Paris. For more information, go to: http://parismoviewalks.co.uk/

Parisian Fields is the blog of two Toronto writers who love Paris. When we can't be there, we can write about it. We're interested in everything from its history and architecture to its graffiti and street furniture. We welcome comments, suggestions, corrections, and musings from all readers.
View all posts by Parisian Fields →
This entry was posted in Paris film and tagged Alexander Trauner, Audrey Hepburn, Autobianchi Eden Roc, Charles Boyer, Eli Wallach, French schedule, Givenchy, How to Steal a Million, Hugh Griffiths, Maxim's, Moustache, Musee Jacquemart-Andre, Neuilly, Peter O'Toole, Ritz, William Wyler. Bookmark the permalink.

15 Responses to How to Make a Surprisingly Enduring Film