A walk in the snow

No trip to Paris would be complete without at least one lengthy visit to Des Photographies, an intriguing shop in Village St. Paul in the Marais. There, with some help from Sylvain Calvier, I have found and bought some wonderful photos of Paris. They are some of my favourite Paris photos, for they have helped me see Paris in a new light. 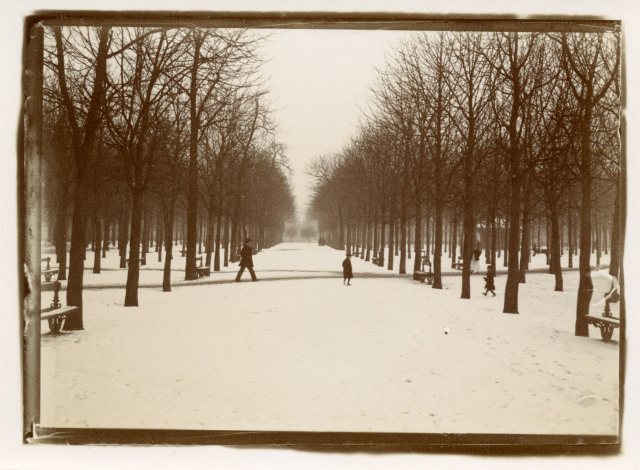 Yes, Parisian snow can be inconvenient or worse, and in a recent blog, I talked about that. But it can also be beautiful.

No matter how harried I might be, the photo above always calms me. It speak to me of when and where I bought it (along with several others). Things in Paris were getting rushed and I needed to slow down. I could think of no better place than Des Photographies. Just before I disappeared into the Metro, Philippa agreed to meet me at the shop in two or three hours. I need at least that long. Time stops for me there.

It is one of the classic small Parisian specialty shops. No space is unoccupied, and one walks very carefully. In quarters that are over 300 years old, it holds more than 100,000 photos, and yet the owner, or should one say curator, Sylvain Calvier, seems to know where to find whatever might be one’s interest. I have spent many enjoyable hours there, and some Euros too. 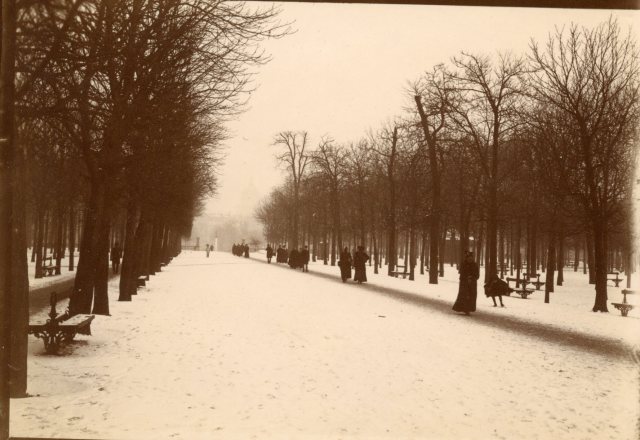 As I looked through a file of early 20th-century snapshots, these two winter photos held my attention. This was a different Paris. More than simply people walking across snow there was a sense of solitaryness, openness, and the unending variety and beauty of the lacelike patterns of trees temporarily denuded of leaves and highlighted by snow. Personal confession: I have never liked evergreen trees, they are so changeless and so boring.

Snow transforms landscapes. Paris is a chameleon, an alluring shapeshifter. One can feel crowded, hemmed in, pushed along, bombarded by sensory overload. And then suddenly it is none of these things. It is a Paris of parks, the geometry of outdoor spaces that whether tiny or large somehow combine vistas with intimacy, a series of mini-worlds that are not in collision. And the snow makes the landscape seem larger and more open, less crowded, and makes the orderly geometry more visible. 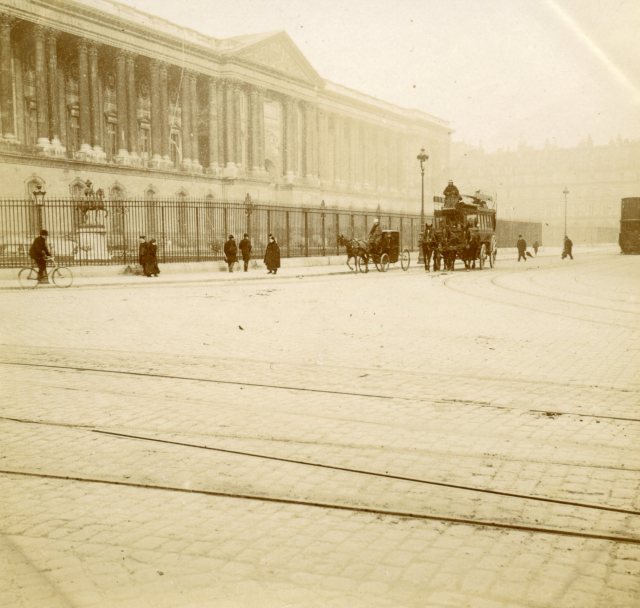 A dusting of light snow seems to reduce the vastness of the Louvre and make it seem only a backdrop to an urban street scene: tram tracks, a bicyclist, some pedestrians, a small horsedrawn carriage, and a large omnibus drawn by four horses. When I had scanned the photo and enlarged it on screen, I noticed a passenger on the unprotected top level; it might have been colder, but it was cheaper up there. And behind the omnibus, a man with a furled umbrella. And again the openness. Snow seems to make people stand out in higher relief. 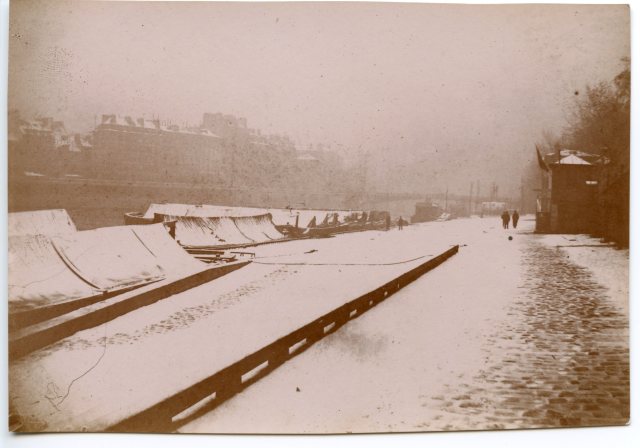 The famous péniches or barges of the Seine look very different here. I love this photo, because it captures three important elements of the Paris I have experienced: the Seine, working boats, and, yes, snow.

Faintly pencilled on the back are the words, “Le Mail au [sic] pommes.” What was that? Le Mail means a market area or mall; pommes are apples. It looked like one of the islands in the background. It turns out that there used to be an apple market near the Hôtel de Ville. Presumably the apples came in barges from Normandy, and perhaps there was some Calvados too, to keep everyone warm. For a view of the scene without snow, click here.

My photographs of Paris in the snow remind me of one of my favourite artists: Henri Rivière, celebrated for his Thirty-Six Views of the Eiffel Tower. In the prologue to the 1902 publication of this great work, Arsène Alexandre writes what too few have read or understood. He clearly states that an artist of the “eminence of Monsieur Henri-Riviére” did not paint the tower because of its greatness, but rather he took the tower as “simply a pretext, a mere excuse to depict everything admirable that is to be found in its vicinity.”* In other words, the paintings are about Paris, the thirty-six views are thirty-six ways of looking at the city and the inclusion of the Eiffel Tower is simply a reference point. 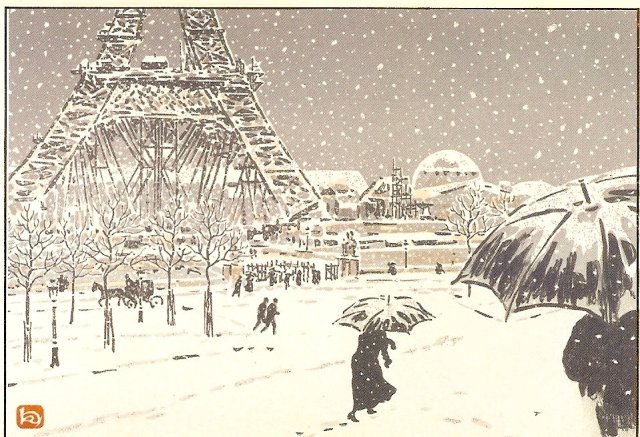 And of those thirty-six views, my favourite is Number 3, the Tower under Construction, as seen from the Trocadero. Henri Rivière was influenced by Japanese art, particularly woodcuts, and the piece feels Japanese. The snow has muted and softened the ironwork and the two umbrellas in the bottom right dominate an image one might have expected the Tower to dominate. Rivière has deftly captured essentials only. 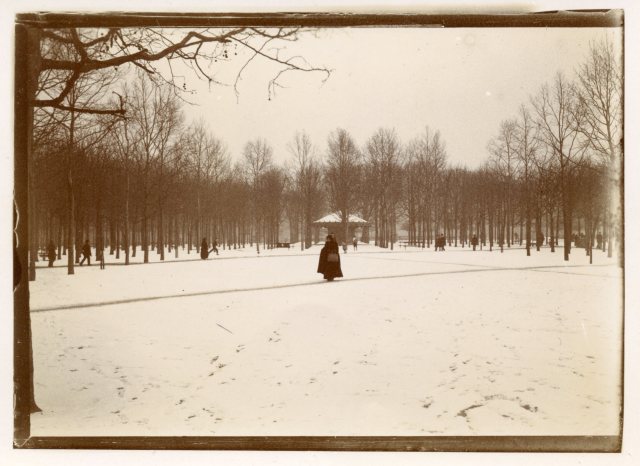 Here is another image that reminds of Henri Rivière. The scene is reduced to its essentials: the trees, the snow, the solitary walker.

French history warns against the dangers of snow. Is vulnerability in the face of snow not the lesson to be drawn from the deadly failure of Napoleon’s march on Moscow? Listen to Victor Hugo in The Expiation, Russia 1812, beautifully translated by Robert Lowell.

The snow fell, and its power was multiplied.
For the first time the Eagle bowed its head—
dark days! Slowly the Emperor returned—
behind him Moscow! Its onion domes still burned.
The snow rained down in blizzards—rained and froze.
Past each white waste a further white waste rose.

…snowfall, floating through the quiet air
buried the huge army in a huge shroud.

Here in Canada, snow is familiar and expected. Songwriter Gilles Vigneault put it this way in 1964: “Mon pays ce n’est pas un pays, c’est l’hiver” (My country is not a country; it is winter.) Mind you, two centuries before, Voltaire, in Candide (1758), curtly dismissed the economic potential of New France as nothing more than “Quelques arpents de neige” (A few acres of snow). Snowy possessions were not worth investing in or retaining.

On February 29 just past, some Canadians may remember the “walk in the snow” of Pierre Elliott Trudeau. On that day in 1984, our controversial and flamboyant prime minister took a stroll to ponder his political future. In the snows of Ottawa, by a wide river that runs through a capital city, he found the clarity he needed to make a decision not to run for re-election.

Perhaps I should end with a photograph I took in winter in Paris. Again, people are silhouetted against the white background in a stately avenue of trees. Again, the scene is reduced to essentials. It combines the beauty of Paris and the familiarity of snow for a Canadian visitor. 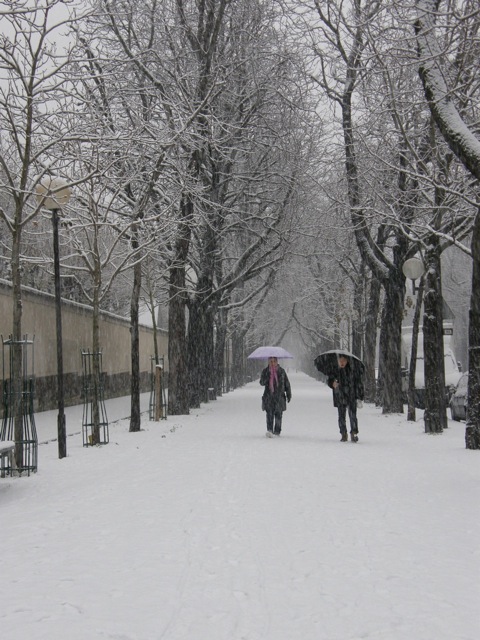 *Henri Rivière, Thirty-Six Views of the Eiffel Tower, with a Prologue by Arsène Alexandre, 1902, republished in a facsimile edition by Chronicle Books, 2010, p.94 (translation by Alison Anderson).

Parisian Fields is the blog of two Toronto writers who love Paris. When we can't be there, we can write about it. We're interested in everything from its history and architecture to its graffiti and street furniture. We welcome comments, suggestions, corrections, and musings from all readers.
View all posts by Parisian Fields →
This entry was posted in Paris gardens, Paris parks and tagged Arsène Alexandre, Candide, Des Photographies, Gilles Vigneault, Henri Riviere, Louvre, Mail aux pommes, Napoleon Bonaparte, Pierre Elliott Trudeau, Robert Lowell, Sylvain Calvier, The Expiation Russia 1812, Victor Hugo, Village St-Paul, Voltaire. Bookmark the permalink.

3 Responses to A walk in the snow