One of our favourite TV programs, Dix Pour Cent/Call My Agent,* opens with the following image, taken either from the roof of the Louvre or from a drone. It is never on screen for more than a few seconds, and I took a screen shot so I could examine it more closely. 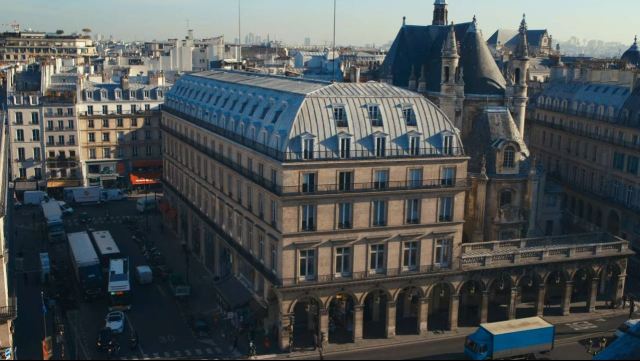 In the foreground is the rue de Rivoli, with its recognizable arcades – they also appear in many scenes at street level. On the left is the rue de Marengo. The church on the right is the Oratoire du Louvre. I found another image of this exuberant if rather hemmed-in church in our postcard collection. 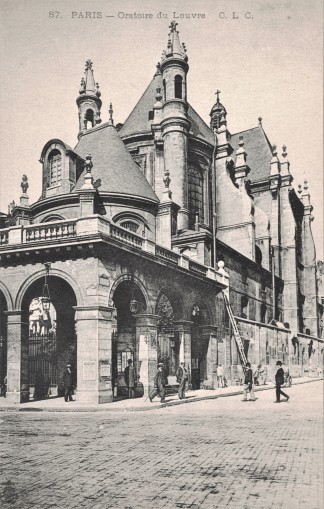 I wanted to take a closer look at the image of the commercial building, because the series maintains the fiction that it has a rooftop terrace – several important conversations and a big party take place up there. The still image does not show anything of the sort, but to be doubly sure, I checked on Google Satellite. And there I found something interesting. 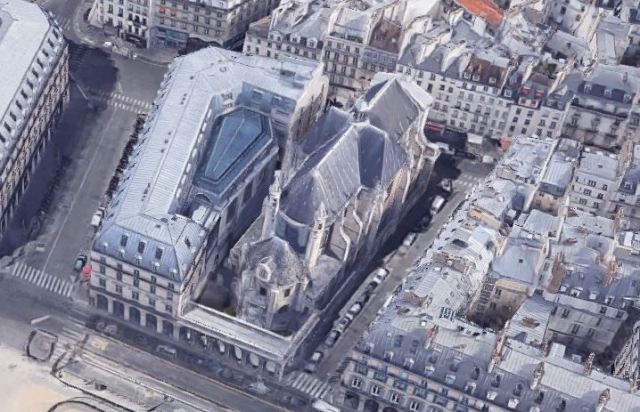 First, it shows that what appears to be a simple rectangular block is actually wedge-shaped. And second, what on earth is that coffin-shaped structure between the commercial block and the church?

It took me a while, but eventually I learned that the answer lies in the building’s history. The block that surrounds the coffin, which bears the street address of 149 rue St-Honoré, was once part of the Grands Magasins du Louvre, a massive department store that faced the rue de Rivoli, founded in 1855 and expanded several times after that. This part, to the east of the rue de Marengo, was an annex to the main building, and the coffin-shaped space was the Hall des Tapis – an opulent display area for rugs and carpets. 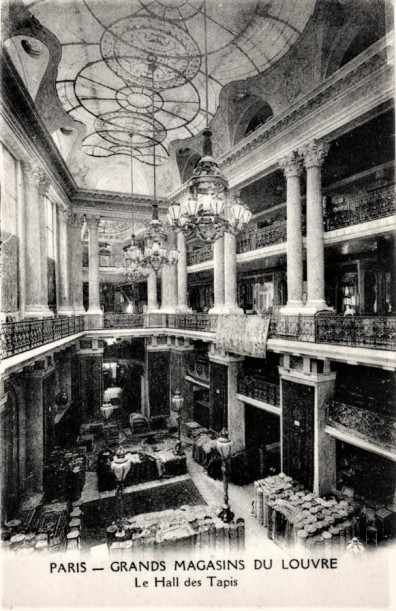 As I hunted for images on the Internet, I discovered that the Hall des Tapis had recently been renovated to form the headquarters for the fashion company Maje.

A new floor has been created at the level of the balustrades over which the rugs are hanging in the postcard image, and the chandeliers have gone, but the rest of the space has been left with its columns and glazed roof. You can see a series of photographs on the website of the architectural firm that carried out the restoration (DTACC).

I also found out that this part of the Grands Magasins du Louvre once served as a military hospital in the First World War, associated with the Val de Grâce. 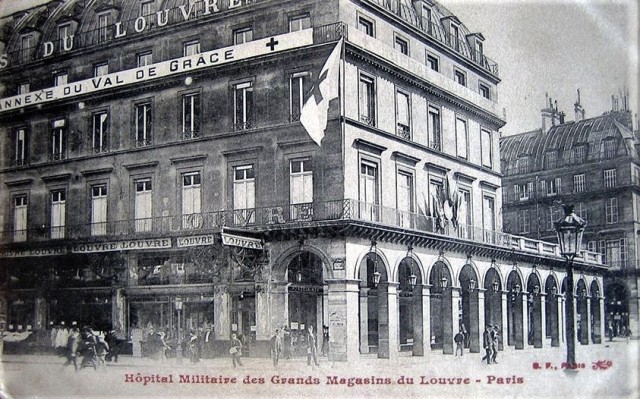 These interesting discoveries kept me absorbed for some time, but they didn’t answer my original question about the rooftop in the television series. So I went back and took a still from one of the scenes in which it is featured.

Other than a stellar view of Norman’s beloved chimneypots, it didn’t offer a huge amount to go on, but it was enough. I cruised over the rooftops of Paris with Google satellite view in 3D and eventually identified the distinctive roofs in the distance on the far left as the tops of the buildings on the north side of the Place de la République and the building sticking up on the right near the crane as a hotel called the Renaissance Paris République.

This information allowed me to do a bit of triangulation, and eventually I found that the rooftop scenes had been filmed on top of  Le Bon Coin, an Internet sales company with offices on the rue du Faubourg St-Martin and a rooftop venue with extraordinary views over the city. Here is the view facing in a different direction.

By now, I was rather enjoying my vol d’oiseau above the city, peering down into courtyards and tilting the view to admire the skyline. It was a rainy afternoon, and I had time to spare. So I took a little promenade from the original building along the rue St-Honoré. And once again, I encountered a surprise.

Not far from the intersection with the rue de Castiglione, I spotted an oddly curved wall inside a courtyard.

I tried 3D, angled it a bit and came at it from the west. 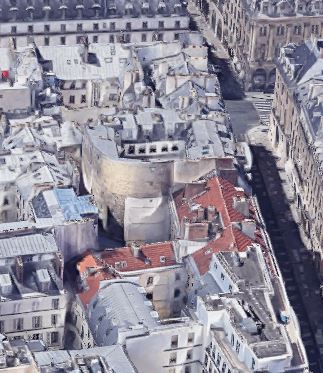 I went in as close as I could (the image started to break up). But I could see little windows in the upper part of the wall. 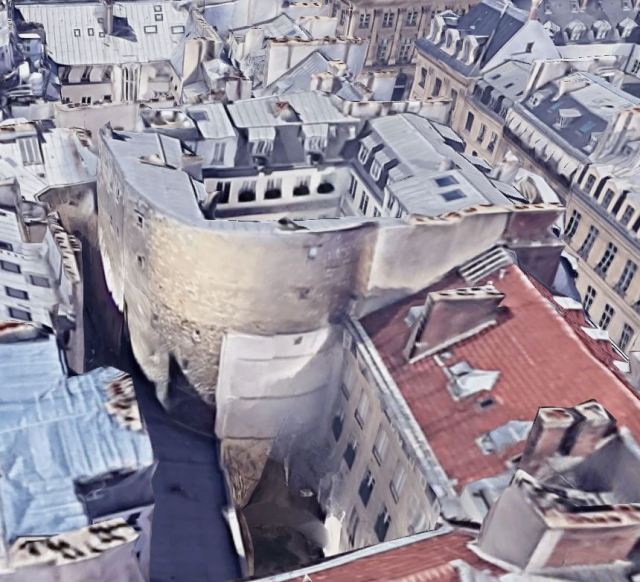 Could this be part of one of the old walls of the city? I needed to compare it with some old maps. (If you love old Paris maps, and you have some time on a rainy afternoon, I recommend this link.)

After several false starts, I found a 1700 map by Alexis-Hubert Jaillot that showed what is now the Place Vendôme, formerly the Place Louis le Grand. Since the rue de Castiglione runs north into this square, it helped me zero in on what is now the intersection with the rue St-Honoré. There I found the Couvent des Feuillants (a Cistercian monastery, built in the early 17th century). So not part of a wall, then. I noticed a church with a rounded apse. Bingo. 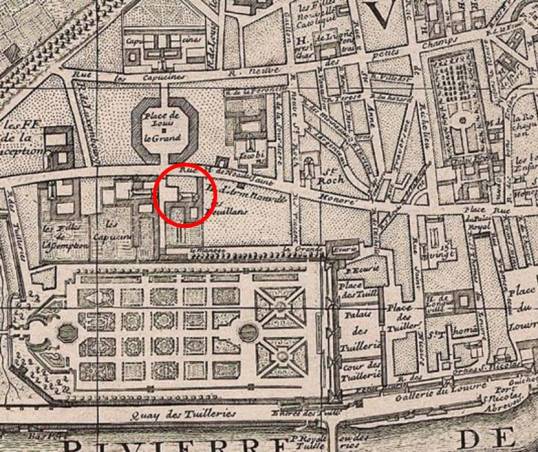 Now I knew what I was looking at, and looking for, I was able to place it in an earlier map, one by Matthaüs Merian, dated 1615. In this bird’s-eye view from the west of the city, the rounded apse on the east side is not visible. Just above the red circle showing the Couvent, you can see the nearby city gate (the Porte St-Honoré) in the wall of Charles V, with a bridge over a narrow moat. The convent is between that gate and a second moat that circled the whole of the right bank. The inner moat joined the outer moat at the Porte St-Denis. So the Couvent was effectively on an island formed by the two moats and the Seine. 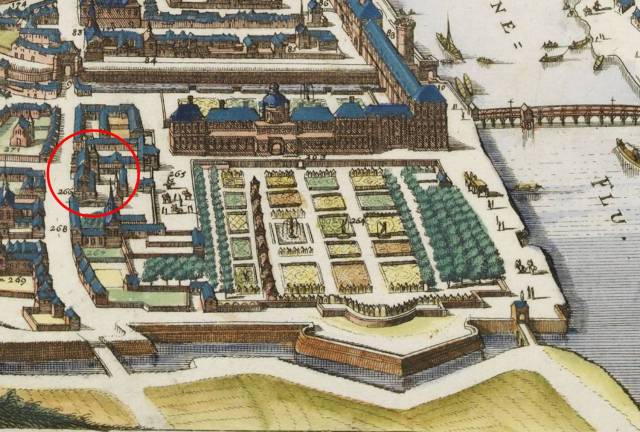 Between the convent and the Seine are a manège for equestrian exercise and sports (you can see little horses in the picture) and the gardens of the Tuileries, laid out by Le Nôtre.

Finally, to confirm what I now knew, I found a photograph on French Wikipedia showing the remaining wall of the Feuillants church. 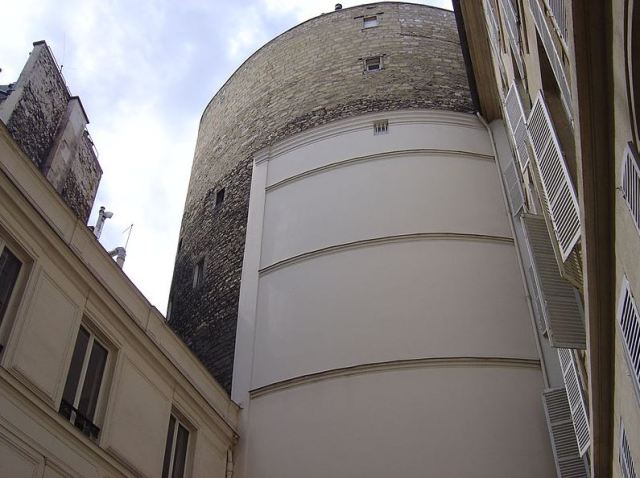 During the early years of the French Revolution, the monks were evicted, the contents of the church were removed, and the site became the meeting place for a group (Club des Feuillants) that supported a constitutional monarchy. The location was handy for the Assemblée Nationale, which had taken over a building that had been part of the manège (it had been built in the early 18th century and so is not visible on Merian’s map).

As you can imagine, it didn’t end well for members of the Club when a more radical element (the Jacobins) came to power.

The rest of the church (except, oddly, this curved wall) was demolished in the early 19th century. A painting by Etienne Bouhot shows the ruins in 1808. 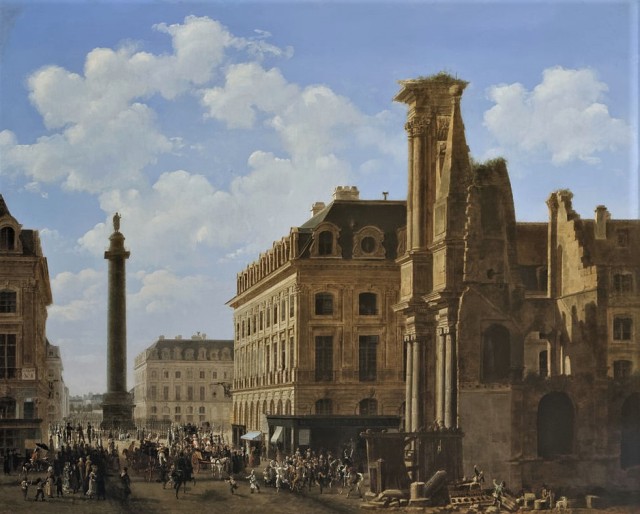 My little journey to find a particular rooftop from a 21st-century television series had taken me over central Paris and back several centuries. I have mentioned here only the highlights of my rainy afternoon skimming the rooftops of Paris (I went down a few additional rabbit holes, as one does). For now, this will have to be the next best thing to being there.

Text by Philippa Campsie; photographs from Google Satellite View, Wikimedia, and stills from the France 2 production of Dix Pour Cent.

* Dix Pour Cent / Call My Agent is a series about an agency that represents French actors and film-makers. Each episode features at least one famous French actor (Natalie Baye! Isabelle Adjani! Juliette Binoche!), and the series as a whole follows the ups and downs of the agency, its four principals, and four assistants – financial woes, shifting alliances, love affairs, breakups, betrayals, and reconciliations. It’s a France 2 production, available on Netflix in French with English subtitles. Three seasons of six episodes each are available and a fourth season is in production.