It never hurts to ask

Posted on December 1, 2019 by Parisian Fields

The Institut de France on the Left Bank of the Seine, near the Pont des Arts, is a familiar sight. We’ve walked past many times, and never thought we’d have occasion to enter it ourselves. But one never knows where research will take one. Just follow the rules. Or not, as the case may be. 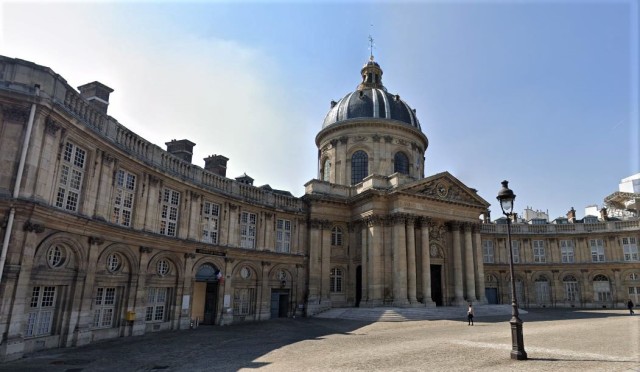 I had identified an obscure document from a meeting of the Académie des Sciences in 1824 that had a bearing on my research into the work of Charles Barbier. I honestly did not expect that the document would have survived the intervening 195 years, but, on the off-chance, I sent an e-mail from Canada to the Académie archives. A day or so later, I received a cordial reply: Yes, it was there. When would I like to come in and see it?

Rule #2: Be prepared for hurdles.

I asked cautiously about what was required to gain access to their reading room. Oh, it was just a matter of making an appointment and providing a piece of photo identification. This sounded far too easy. I remember the trouble I had gone to secure a reader’s pass at the Bibliothèque St-Geneviève when I was a student. I had to provide several photos and fill in endless forms and I did not get access to the library until several days later.

So I made the appointment for shortly after our arrival in Paris, on the assumption that I would probably need to go back if I could not get access to the archives immediately.

On a sunny April day, Norman and I presented ourselves to the security guard at the front gate. He examined our passports and retained them, and directed us to the innermost of the three courtyards, last entrance on the right, up to the top floor. We crossed the courtyard, admiring the sun dials and fountains, pleased at our progress so far. 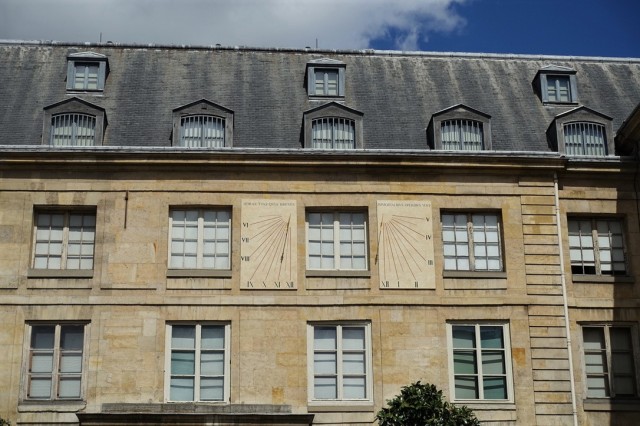 The archives occupied a pleasant room under the roof, with views over the courtyard on one side and the rue Mazarine on the other. It wasn’t very large, but then, the number of researchers who sought out this obscure space was probably not large either. 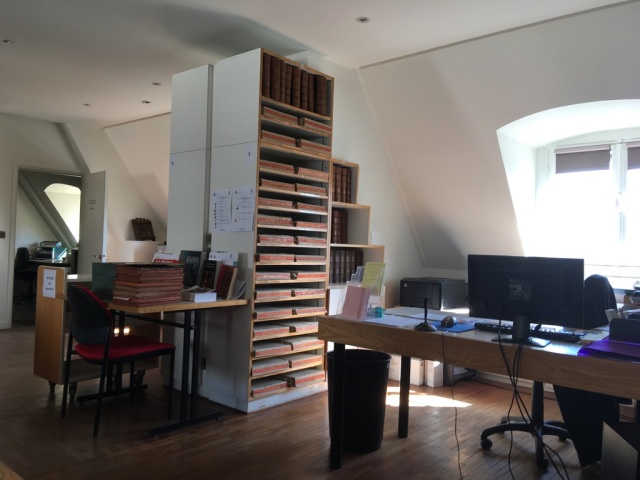 I filled out a form with details of the documents I wanted. It was probably the least complicated form I have ever seen in France. 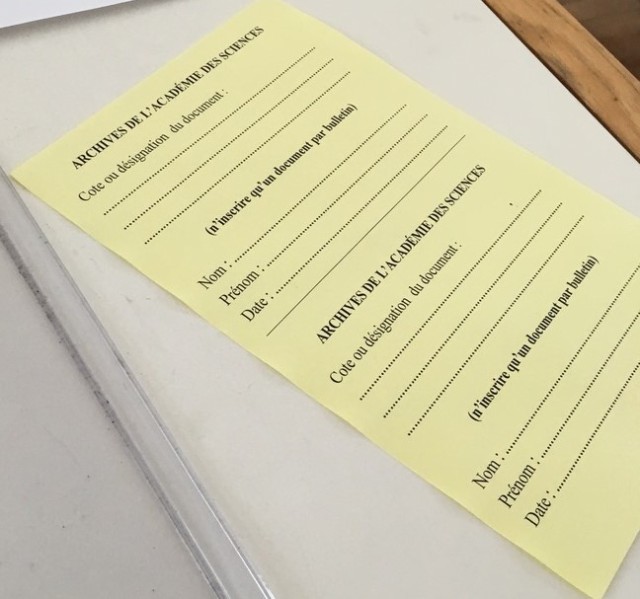 Then I settled down to wait. I wasn’t in a rush. We had all day. I delved into my bag for a book. I had barely taken it out when the document was in front of me. So much for that rule. 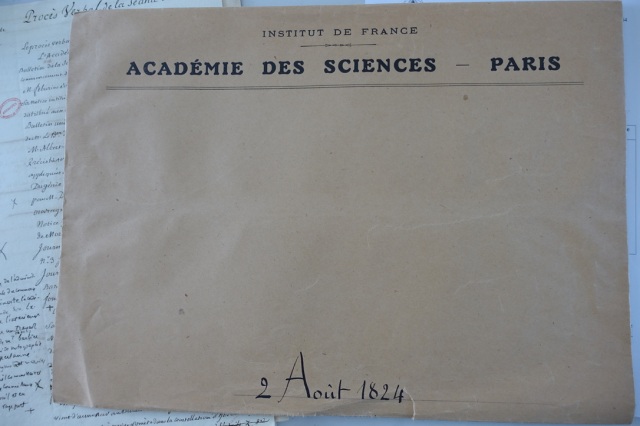 The document itself was a surprise. I had expected some sort of multi-page report, but what I saw was a large piece of thick paper, almost like a poster, folded up and inscribed in the tiniest of printing. The title mentioned Persian and Chinese shorthand, but there was no sign or mention of Persian or Chinese in the text or illustrations. Curiouser and curiouser. Now I know why the Académie des Sciences in 1824, having accepted Barbier’s document and agreed to write a report on its contents, never did anything with it. Clearly their members could not make head or tail of Barbier’s peculiar venture into alternative writing forms. Neither could I.

I asked if I could photograph it, expecting to be refused. Mais bien sûr, allez-y. This was starting to feel surreal. All the barriers I had imagined were simply disintegrating. But the best was yet to come.

After transcribing the document (not easy with such small writing) and taking several photographs of its strange scripts, we got into conversation with one of the librarians and explained about the search for Barbier’s work. She expressed interest and suggested we make inquiries at the Société d’Encouragement pour l’Industrie Nationale.

I was gobsmacked. That Napoleonic-era organization still existed? I knew that Barbier had had dealings with it, but I never dreamed that it was still a functioning entity. Ah yes, just across from the Eglise Saint-Germain, right on the square. It was perhaps a fifteen-minute walk away.

We gathered up our things and set off back through the courtyards, feeling slightly giddy. 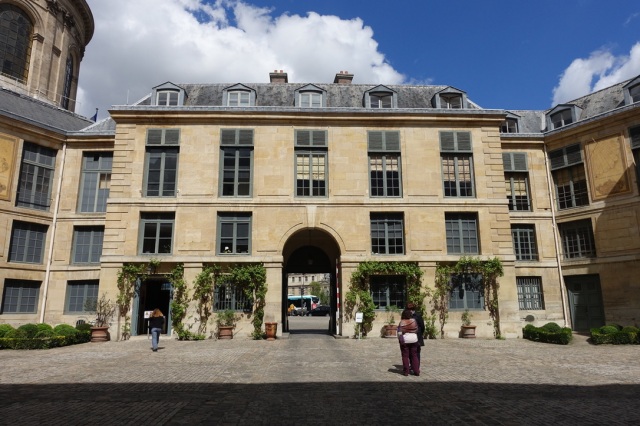 The building was as described, but what startled us at first was that part of the ground floor had been turned into a restaurant. Two women in fashionable attire and extremely high heels asked us what we wanted. We explained and one gestured to a set of glass doors, beyond which was an ordinary-looking office. 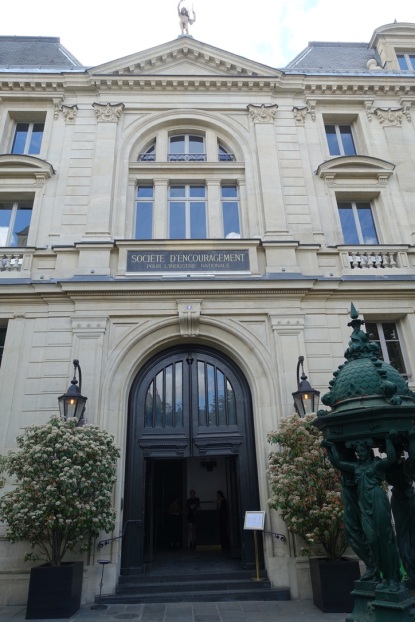 There I poured out my story to a woman behind a desk. She looked thoughtful and asked us to wait while she made a telephone call. This took a little time, but then she told us we were in luck (we knew that already). Although it was the Easter holidays, and the building was undergoing painting and renovations, one of their members, a retired engineer, was working upstairs on an inventory of the Société’s books and documents and would be prepared to help us. She would take us to see him.

We took a short elevator ride, and then crossed a large empty space the size of a ballroom. 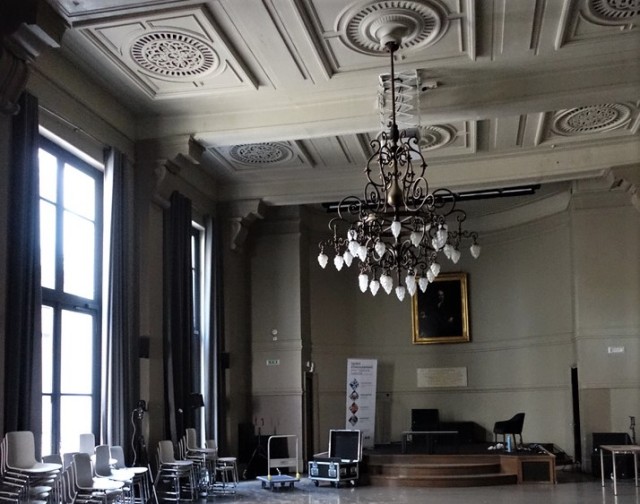 A corridor on the other side led to a narrow staircase. We went up to the top floor. There was a strong smell of fresh paint.

Once more we found ourselves in a room under the roof with sloping ceilings. A man sat at a crowded desk, surrounded by piles of books and documents.

I launched into my usual explanation. He made another, even longer phone call to another member of the organization. Then he asked us to follow him to a nearby room. It was essentially the attic of the building, containing shelves of books, now swathed in drop-cloths to protect them from the painters. The books were bound copies of the Bulletin of the Société and they were indexed. There were several index entries for Charles Barbier.

Finding the relevant pages took a little time, and one bound volume seemed to be missing, but we found more than enough to make the trip worthwhile. The helpful man said he would see us back downstairs, but on the way he said he had something to show us.

Rule #7: Pay attention to your surroundings.

In the huge ballroom, he stopped in front of a plaque, which stated that the first public presentation of a moving image by one of the Lumière Brothers had taken place in this room in front of the Société’s members in March 1898. Not long before, we had attended a public lecture about the culture of the spectacle in Paris in which this event had been mentioned, so we were particularly interested and very glad that he had taken the time to show us. 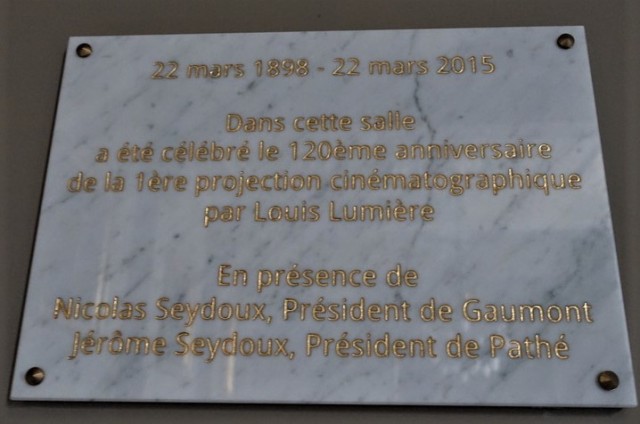 He even turned on the lights in the ballroom, which began to look a bit grander and less abandoned, despite the ugly modern chairs and plastic tables. 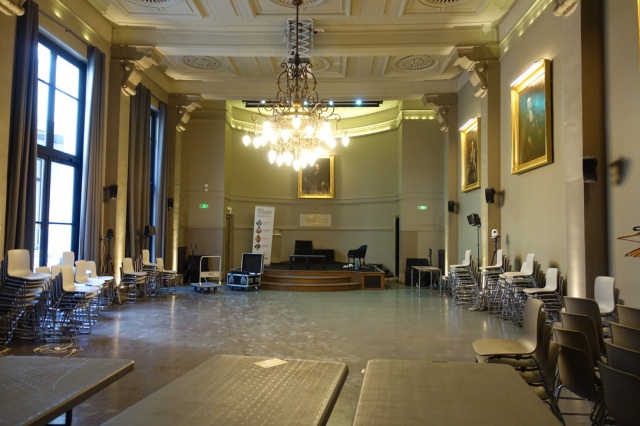 It was extraordinary to be standing in this room, the site of events attended by Paris’s leading industrialists and thinkers in the 19th and early 20th century. It was quiet and we seemed miles away from the busy Boulevard St-Germain, which was just beyond the windows.

Eventually we reeled out onto the square and back into the 21st century. We decided to treat ourselves to a good lunch nearby. We celebrated our productive morning and toasted one final rule of research:

Rule #8: Most really interesting discoveries are a matter of serendipity. 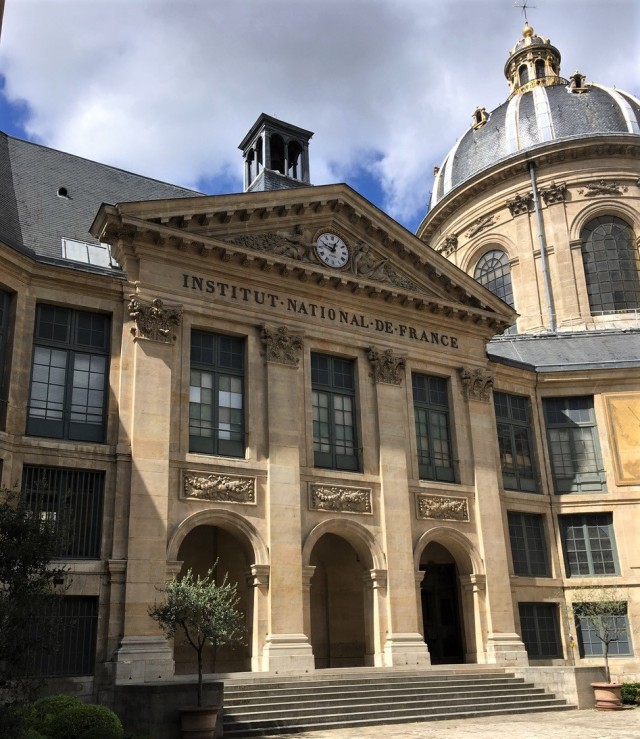 Parisian Fields is the blog of two Toronto writers who love Paris. When we can't be there, we can write about it. We're interested in everything from its history and architecture to its graffiti and street furniture. We welcome comments, suggestions, corrections, and musings from all readers.
View all posts by Parisian Fields →
This entry was posted in Paris history and tagged Académie des Sciences, Charles Barbier, Institut de France, Lumière Brothers, Société d’Encouragement pour l’Industrie Nationale. Bookmark the permalink.

15 Responses to It never hurts to ask