Avoiding the crowds in Versailles

It may seem impertinent to write about Versailles on Bastille Day, the ultimate Republican holiday, but I am not talking about that Versailles – the royal chateau, now overrun with tourists. I want to talk about the other Versailles – the attractive town with its quiet tree-lined streets and bustling markets. In Versailles, getting off the beaten track is easy, since there is only one beaten track. Everything else is uncrowded and peaceful by comparison.

I went in April, with our friend Mireille, in pursuit of Charles Barbier, the original inventor of point-writing (precursor to Louis Braille). As I mentioned last time, most of what has been written about him is balderdash and I am trying to set the record straight.

Barbier lived in Versailles in the 1820s, and I wanted to learn more about his time there, if possible. I had two addresses for him, and I knew that the Archives communales de Versailles had records of a yearly census that had taken place in the 1820s. That was enough to plan a visit.

So on a sunny Friday, we endured a crowded RER ride from Les Invalides. We got off at the Rive Gauche station, and headed along Avenue Général de Gaulle. And when everyone else from the train surged left towards the chateau, we kept going towards a residential area. Our way led through the Marché Notre Dame, which was in full swing. 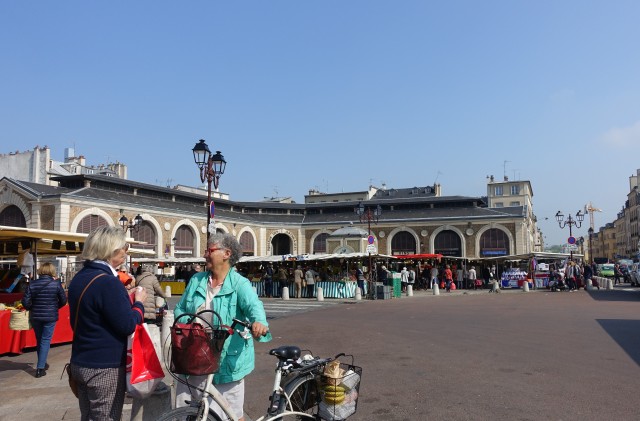 It was tempting to dawdle there, but we carried on and found our first address: No. 4, rue Sainte-Victoire. The building was old enough to be the one that Barbier would have known. It was on a quiet narrow street, and we could see tantalizing glimpses of gardens behind the houses. In fact, I placed my camera on the ground and took a shot underneath a gate (okay, I’m nosy). 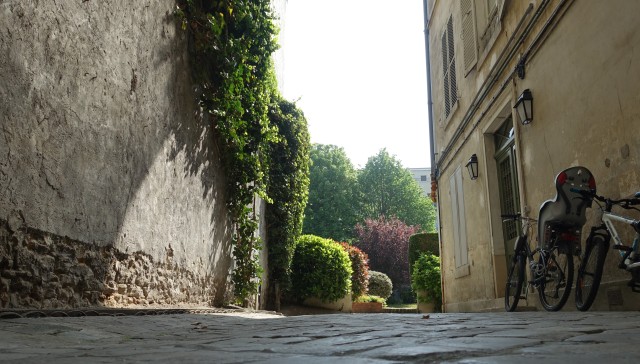 We circled the block to see what else might be visible, but the houses kept their secrets.

The second address was just around the corner: No. 95, boulevard de la Reine. Just as this was beginning to seem too easy, I saw something that made my heart sink: No. 91, ancient No. 75. 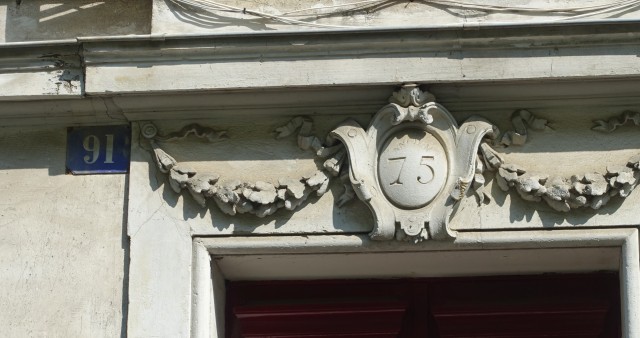 Zut alors! The street had been renumbered at some point, probably after Barbier’s time. So I snapped away at likely-looking houses in the vicinity, hoping that I could sort out the numbering at the archives.

We were diverted to see that the utility boxes on the boulevard were decorated with illustrations from La Fontaine’s Fables. Barbier used those fables to illustrate some of his alternative forms of writing, including this one of the fox and the grapes. 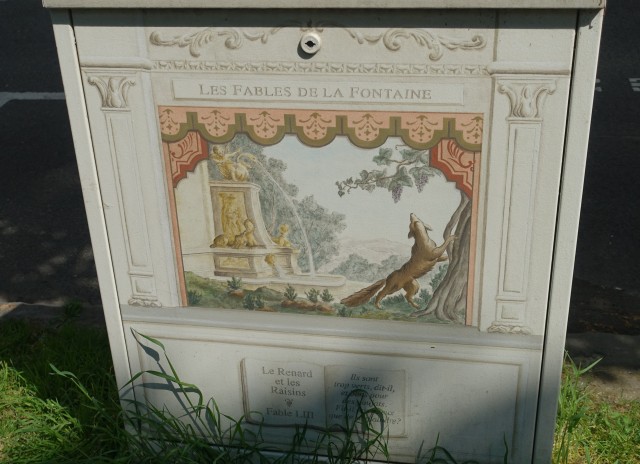 By this time, we were ready for lunch, so we retraced our steps and had a choice of inviting cafés and bistros on the streets surrounding the market. 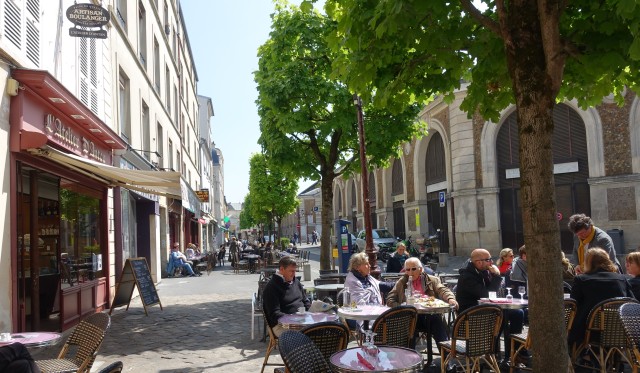 The market was closing up as we walked through it after lunch. I spotted a stand selling baskets for 5 euros and picked out one into which I dumped my notebook, my pencil case, my map, and my cardigan (by then unneeded). 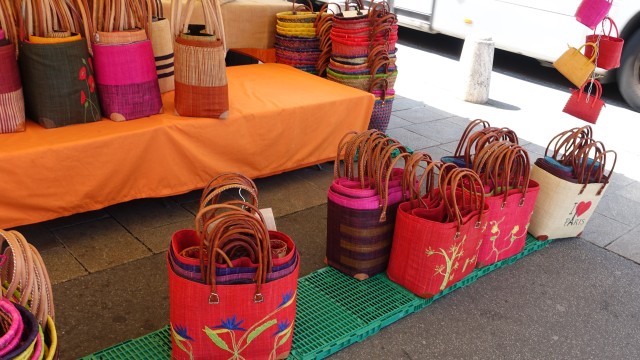 Finding the archives proved to be more difficult than we expected. The mailing address I had written down turned out to be the magnificent city hall. 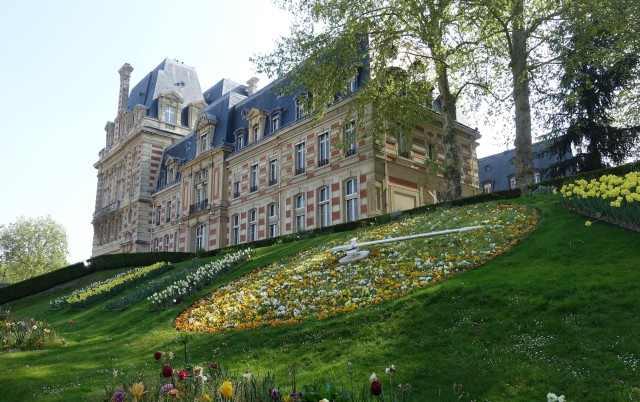 The interior was every bit as grand as the chateau, and we had it all to ourselves. 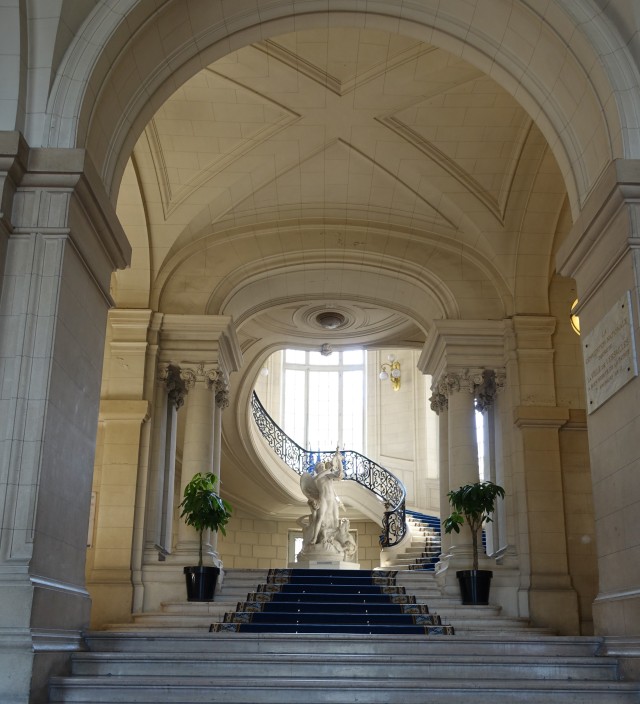 We asked the man at the desk at the foot of the imposing staircase. No, the archives were in a different building, “over there, across the street,” he said, gesturing vaguely. Since the city hall stands at a large intersection, “across the street” could be interpreted in a number of ways.

We set out in the direction of his gesture and found ourselves walking towards the chateau. We inquired at the Écuries du Roi (the former royal stables). Nobody there had even heard of the Archives communales. We returned to the intersection and tried the other side of the street. We passed an interesting installation made of curving staircases. 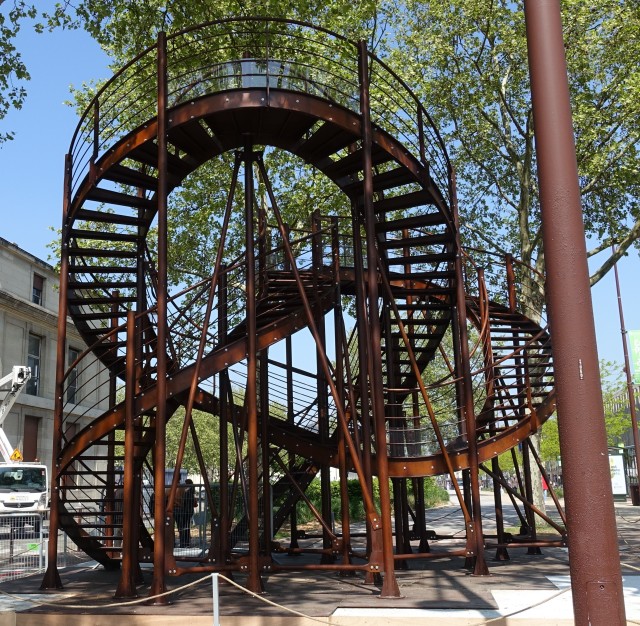 We also noticed an amusing trompe-l’oeil in the window of a nearby building. 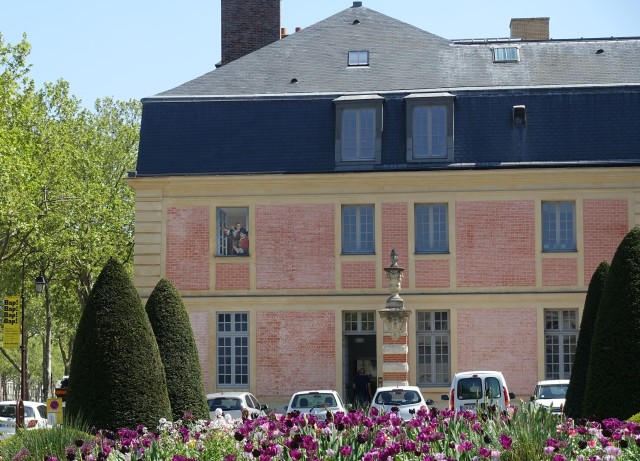 Finally we spotted a small blue sign, positioned sideways, beside the entrance to a courtyard. Aha! 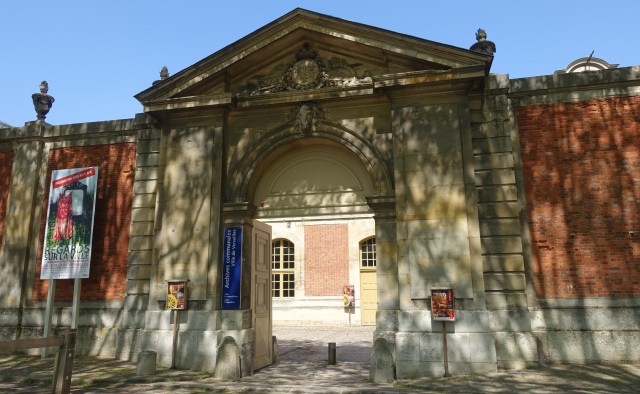 Some cars were parked in the courtyard, and only after working our way around the periphery did we see another blue sign. It told visitors to go around the corner and through another archway. We found the entrance, with a stairway leading upwards. The archives were on the top floor. Up we toiled, to find a spacious room lined with bookcases, containing large tables and computer monitors.

An archivist showed us how to view the censuses on the computers. Mireille and I sat down beside each other and we each chose a different year to begin with. After a few false starts, we found our man.

The census covered five years of his stay in Versailles, during which time he was living in the boulevard de la Reine.

1824: Barbier is described as a “rentier célibataire” (single man of independent means) aged 61 (he was actually 57), paying 50 francs a year for lodging. Clearly the census takers weren’t fussy about getting ages correct.

1825: Barbier “et sa femme” are living in 2 rooms and paying 60 francs a year. What! All the other records suggest that Barbier never married. And why didn’t they give the woman a name?

1828: Barbier is now living alone in one room and paying either 30 or 50 francs a year (the handwriting was not clear). The nameless woman in his life (who might have been a maid or a lover or both) has gone and Barbier has downsized (money troubles?).  At some point in the year following the census, Barbier returned to Paris, and he does not appear in the 1829 census.

That was all. I had been hoping that the census might identify how Barbier described himself in terms of his work (inventor? writer?). I was hoping for a clue to his decision to live in Versailles during those years. And the archivists were unable to help with the question of changed street numbers, so I still don’t know which house on the boulevard de la Reine he lived in.

Ah, well. We had a mercifully uncluttered day in Versailles, a good walk, a good lunch, and found some unexpected information to chew on. As we squeezed ourselves into a train bulging with weary, sweaty tourists, we felt quite smug.

Parisian Fields is the blog of two Toronto writers who love Paris. When we can't be there, we can write about it. We're interested in everything from its history and architecture to its graffiti and street furniture. We welcome comments, suggestions, corrections, and musings from all readers.
View all posts by Parisian Fields →
This entry was posted in Charles Barbier, Paris history, Paris markets and tagged Archives communales, Charles Barbier, La Fontaine, Marché Notre Dame, Versailles. Bookmark the permalink.

6 Responses to Avoiding the crowds in Versailles