Stepping back into the river

Our sabbatical from blogging lasted a year. We are uncertain about how and how often we will continue, but we did want to say hello to our readers (if you are still there) and post an update.

Over the course of the year, while keeping up with work and family commitments, we pursued our research. Norman continues to study the technology of communications with and among the blind; Philippa is investigating the story of a peculiar early-19th-century inventor called Charles Barbier (don’t  bother looking him up on Wikipedia, because the information there is wildly inaccurate).

We visited Paris earlier this year, arriving a week after the fire at Notre Dame. We did not go to see the site; it seemed more respectful to stay away.

We were also in the city for the annual May Day parade, which passed under the windows of our rented apartment. May Day is France’s Labour Day and the parade celebrates working people and unions. 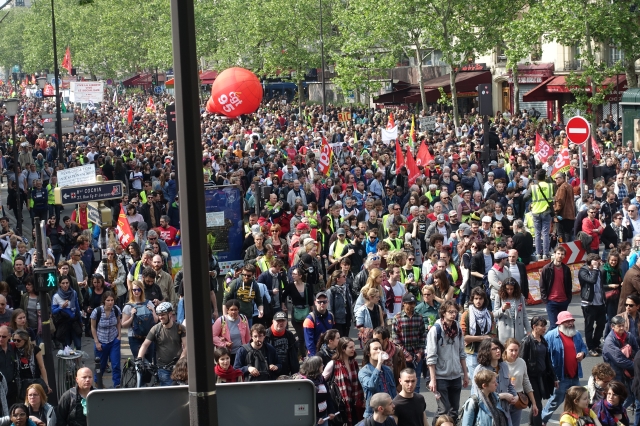 We saw a few scuffles between marchers and the police (who were present in large numbers), but for the most part, it consisted of a vast mass of people walking, waving flags, sometimes singing, and generally enjoying a day off work in nice weather.

Some wore gilets jaunes, some wore silly costumes. This fellow had both.

There were banners and flags and slogans. Not all were aggressively political; here are two we spotted in the evening after it was all over. 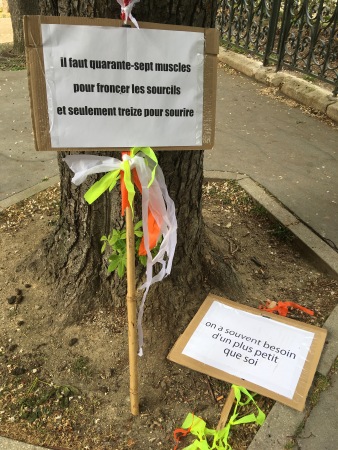 (The one against the tree says “It takes 47 muscles to frown and only 13 to smile” and the one on the ground says, “Sometimes one needs someone smaller than oneself.”)

The marchers took about two hours to pass the intersection where we were watching them. Then the police took off their riot gear, piled into vans, and went home, and the men in green came out to clean the streets and tidy up the rubbish and that was that. Life on the boulevard continued.

The preparations for the parade were as interesting as the parade itself. Over the days before the march, everything movable was taken away – chairs were piled up inside cafes; cars, bikes, and scooters were parked on side streets; even the local bottle bank disappeared. Panes of glass were removed from bus shelters along the route. The windows of public buildings were boarded over. 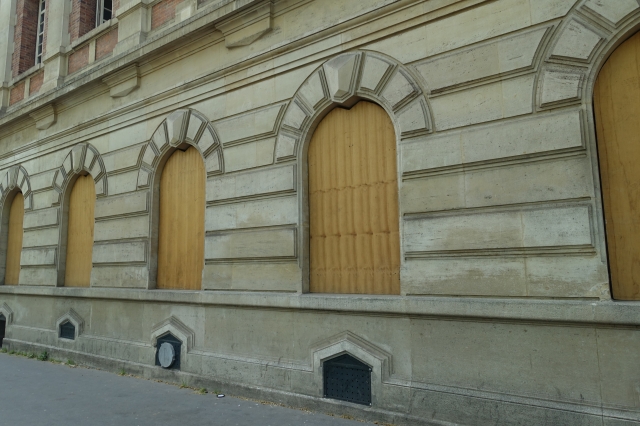 Temporary bus stops were dumped in a heap with some scooters on the pavement behind the police cordon.

The temporary stops were there because the bus routes were in flux. Construction on the RER underneath the boulevard Montparnasse had led to the re-routing of traffic lanes, and buses could no longer stop at the usual places. The same was true of the stops around the Bastille, where traffic is permanently snarled as the circle is reconfigured into a U-shape to allow more space for pedestrians in front of the opera house.

Meanwhile, the city has rearranged the entire bus system of Paris – the first time since the 1960s. Those handy books filled with details on the routes and the stops and the interchanges are now obsolete.

Of our two local routes, one was extended, one was curtailed. The 91 used to link the Gare Montparnasse with the Bastille; it now goes all the way to the Gare de l’Est and the Gare du Nord. You have to watch your shins because it seems nearly every passenger has a suitcase. The 83 from the Porte d’Ivry no longer crosses the river to the Right Bank. 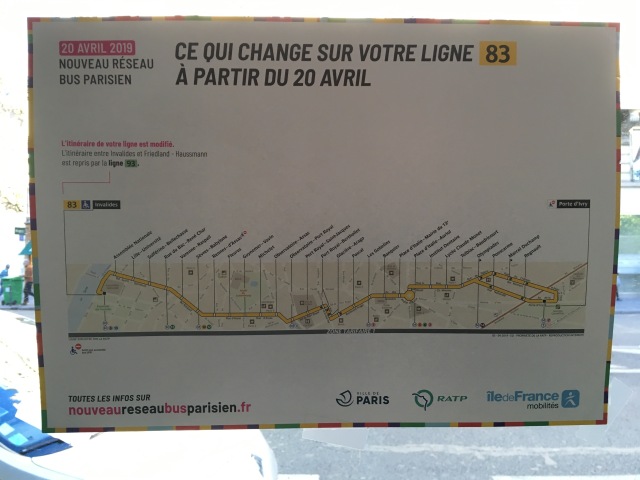 On the one Saturday we spent in the city, transit was even further disrupted because of the weekly demonstrations. We went with a friend to an exhibit at the Fondation Custodia (a delightful art gallery that even some Paris residents have not yet discovered). The bus that should have taken us there stopped several streets short of our destination and we then had to cross a police cordon. The police officers were helpful and moved the barrier to let us by. We spent a happy afternoon in the gallery, which was filled with visitors, but quiet and peaceful.

Change, destruction, chaos, and flux. In the midst of which one finds oases of tranquillity and space for memory. Paris is not only divided by a river, it is a river. One never steps into the same Paris twice.

Parisian Fields is the blog of two Toronto writers who love Paris. When we can't be there, we can write about it. We're interested in everything from its history and architecture to its graffiti and street furniture. We welcome comments, suggestions, corrections, and musings from all readers.
View all posts by Parisian Fields →
This entry was posted in History of the blind, Paris civic functions, Paris streets, Paris travel and tagged bus routes, Fondation Custodia, gilets jaunes, May Day, RATP. Bookmark the permalink.

18 Responses to Stepping back into the river