The art of the gasometer

The major summer exhibition at the Art Gallery of Ontario is devoted to the work of Canadian artist Lawren Harris (1885–1970). I associate his name with bold, abstracted images of Canada’s Far North – mountains and glaciers and frozen seas. However, the exhibit included his early works, painted in Toronto, and one in particular caught my eye. 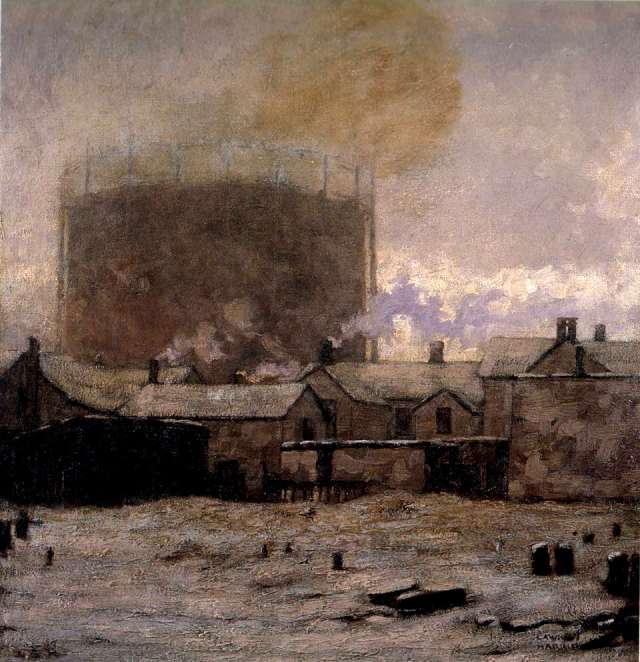 “The Gas Works” dates from 1912. I immediately had two questions. First, where were Toronto’s old gasometers? And second, hadn’t I seen something similar in a French painting of Paris?

Question 1 was easy enough. Toronto’s gas works were at Front and Parliament streets, an area that has been redeveloped almost beyond recognition. Question 2 led me to the post-Impressionist painter Paul Signac (1863–1935) and “Gasometers at Clichy”: a much less dismal scene than Harris’s.

Gasometers also appear, just on the horizon, in Signac’s painting of the bridge at Asnières.

These would of course be the same gasometers from a different angle, as the suburb of Clichy is just across the river from Asnières. Signac lived in Asnières at the time.

I also found works by Van Gogh (below) and Pissarro (not to mention many by British artists of British gasometers, some of which look much more ornate than the French ones). 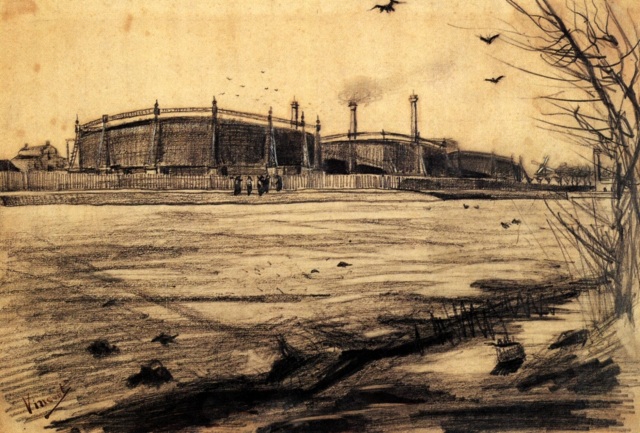 So what, exactly, are we looking at? The word “gasometer” (gazomètre) is a little misleading, because it sounds like an instrument of measurement. These huge cylindrical constructions were simply storage tanks for artificial gas (usually coal gas); in English they are sometimes known as gas holders. In a previous blog, Norman described the process of making gas from coal or other raw materials by

destructive distillation (heating to high temperature in the absence of air)… The heat drove off gases which could be collected and stored in the gasometer… and distributed from there by gas lines. This was the artificial gas that powered, heated, and lit so many buildings and businesses in the 19th century.

In these huge gas holders, the level of gas in the storage tank rose and fell within a cylindrical metal cage called a guide frame.  When full, the top of the tank rose to the height of the frame and the whole thing appeared to be a solid cylinder; when depleted, the top moved downwards, leaving only the guide frame visible. This arrangement made it possible to maintain pressure in the gas lines.

A series of photographs of the now-demolished St-Denis gasometer on French Wikipedia, taken in 1981, shows the wheels that allowed the top of the storage vessel to rise and sink with the level of the gas.

Another photo from the same series shows the amazing view from the top of this tall structure: Sacré Coeur and the Eiffel Tower are easy to spot from here. This also means that the gasometer itself was visible from afar.

Gasometers started to appear in Paris in the first half of the 19th century. By 1860, Paris had 19 of them; by 1907 there were 61. But with the arrival of natural gas for heating and cooking and of electricity for lighting, the numbers dropped. In 1945 there were only 23; the rest were demolished over the ensuing decades.

By comparison, London still has some of its gasometers, a few of which have been converted to other uses. Vienna even has a series of brick-framed gasometers that were turned into apartment blocks.

Here is the one at Vaugirard. Note how the gasometer in the foreground is slightly more ornate than the others. 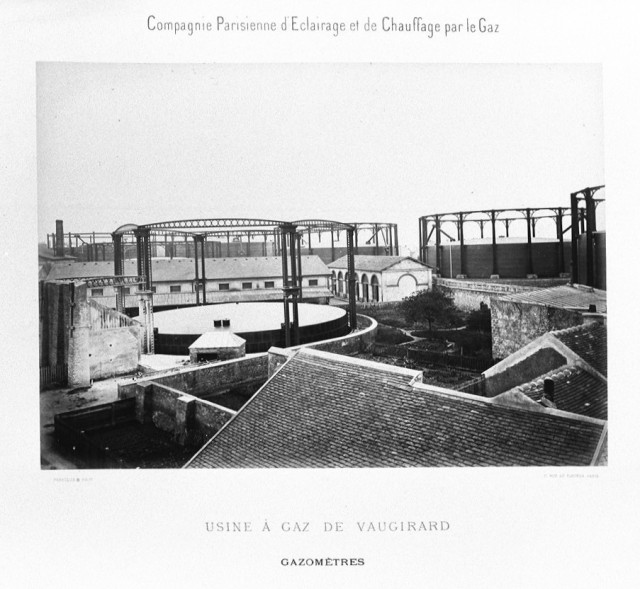 And here is a severely utilitarian version at Passy. “Epuration” means filtering or purification. The people in the picture give you a sense of the scale.

Today, some people admire gasometers as evidence of industrial history and work to preserve them. Others are glad to see them demolished. When they were constructed, they were equally controversial (remember how many people disliked the Eiffel Tower at first). Many Parisians didn’t want to live within sight (or smell) of them.

Indeed, gas lighting in itself was controversial, as Jean-Baptiste Fressoz* has explained. For one thing, new technologies tend to put the purveyors of old technologies out of business – these would have been the makers and suppliers of alternative light sources such as oil lamps, and all the paraphernalia associated with them. Before the 19th century, oil for lighting in France came mainly from rapeseed (canola) oil, and this had been an important crop for farmers.

And there were concerns about the effects of the new technology. Fressoz explains:

As gas light penetrated theaters and operas,  arcades and boulevards,  reading rooms and cafés, the public debate on its dangers and inconveniences extended. Indeed, in all these spaces of sociability and discussion, gas brought about the insecurity of sudden darkness, the ugliness of an industrial light, the bad smells and insalubrity of chemical industries, and last but not least, the risk of explosion.

Gas was provided by commercial companies from their gasworks, which meant that individuals gave up control over the supply of fuel. The gas company might interrupt supply at its source, intentionally or unintentionally, plunging a building, a neighbourhood, even the whole City of Light into darkness…and who knows what could happen then? Crime, assassinations, chaos!

Despite the risks, France forged ahead, spurred on by competition with Great Britain, which had already adopted the technology. God forbid that the English should gain a technological advantage. French industrialists and politicians felt they had no choice.

Yet the possibility of explosions continued to unsettle Parisians. The catastrophic explosion of a gunpowder factory in Grenelle in 1794 was still part of living memory and there were two minor gas explosions in the early 1820s in Paris.

When in 1823 a huge new gasometer was proposed for the Poissonnière neighbourhood, one that was ten times larger than anything in London, French scientists studied the matter in their usual abstract, theoretical way, and assured the public that the risk was minimal. Bien sûr, the gasometer would not explode. Impossible.

On May 1, 1844, a gasometer at the Ternes-Courcelles gasworks was blown over in the wind and exploded, causing what La Presse described as “une immense gerbe de feu” (a huge blaze of fire). Firefighters and policemen were able to bring it under control, but six workers were injured. 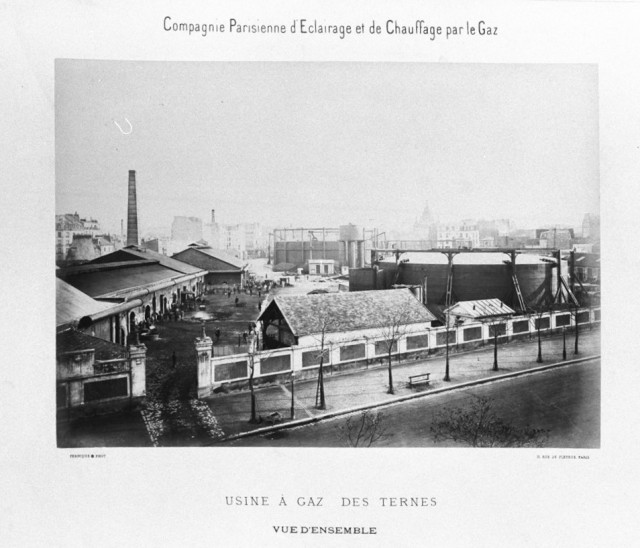 On September 27, 1849, a gasometer on rue Richer that supplied the Opera burst into “un immense jet de flamme” because of a gas leak, but an employee was able to prevent the spread of the fire to the storage areas where stage sets and props were stored.

Alarmed by these events, in 1852 the government ordered that all new gasometers were to be built outside the city. But the gas companies preferred to be close to their clients. And the city was gobbling up former suburbs so quickly that the order was largely meaningless. In 1860, the city expanded by annexing former suburbs, essentially bringing gazomètres into the city that had formerly been in the banlieue.

Artificial gas reached its zenith before the First World War, when most of these photographs were taken, and after that, it declined as a source of power and light. Electricity largely took its place, with its own pros, cons, risks, and benefits.

But when artificial gas was king, one of the biggest installations was in La Villette. The usine à gaz had twelve gazomètres, as well as vast works for distilling and processing gas. 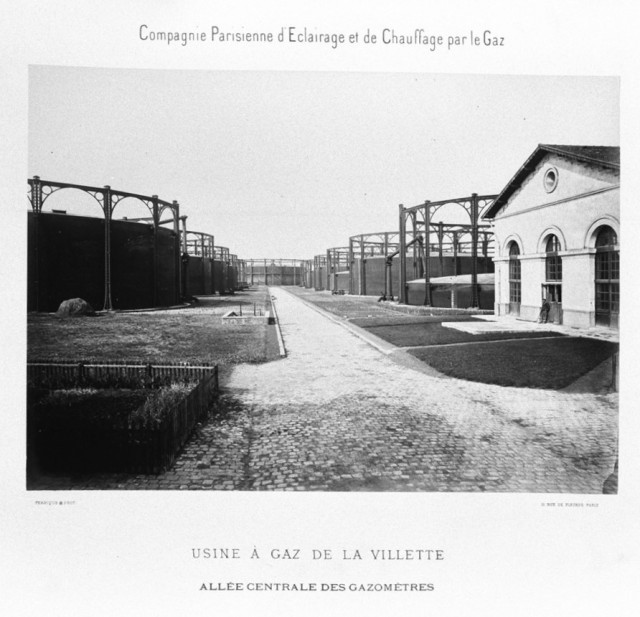 This factory survived well into the 20th century. On the rue de l’Evangile in front of the gasworks was an ancient calvaire (a roadside crucifix, the only one in Paris), and the juxtaposition of the two seems to make an association between gasometers and Golgotha.

Today, the calvaire is still there, minus its grotto, but the gasometers are long gone. The last, the huge one in St-Denis, disappeared in 1982, and with it, a whole way of life ended.

22 Responses to The art of the gasometer