Make do and mend

I took my umbrella to Paris in March. It was not that I needed it to keep off the rain. It was so that I could do something with it in Paris I could not do in Canada: get it repaired. 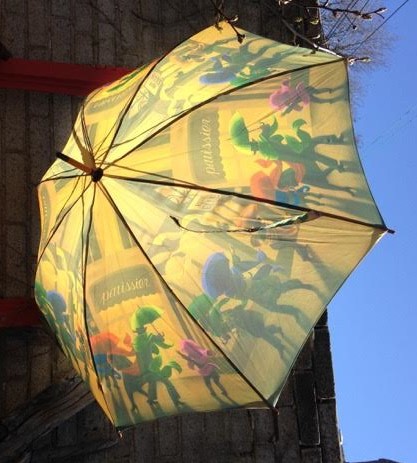 I bought the umbrella some years ago in Montreal, and about the third time I used it, a gust of wind turned it inside out and snapped one of the struts. I couldn’t find anyone to repair it in Toronto (or indeed, anywhere in Canada), but I kept it because I liked the fabric and the colours. I hated the idea of simply throwing it away because a strut was broken. And then I realized that in Paris, one can have such things repaired.

My online searching yielded two addresses for repair shops: one in the 3rd and one in the 12th. The day after our arrival, I headed for Pep’s in the 3rd. I had read about it online, and as usual there were crabby comments about someone having arrived to find the place closed. I wasn’t sure my plan would work.

Pep’s is in the Passage de l’Ancre Royale, just off the rue de Turbigo. It’s a different world in there, and one can forget the 21st century outside. 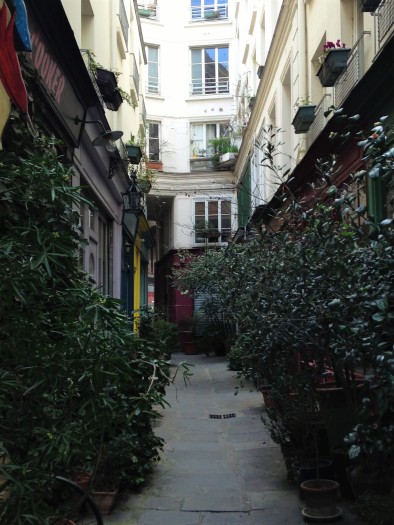 A sign indicated to ring the bell. There is only one employee, and he works upstairs. (Perhaps the crabby person who commented online had not seen the sign?)

The repairman responded promptly and opened the door. I handed him my umbrella. He took a look, asked for 22 euros in advance, and told me to come back the following week. When I came back to pick it up, I could not even determine which strut had been repaired. Can you? 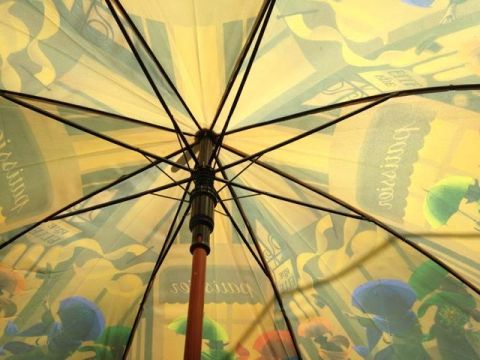 The repairman’s name was Thierry Millet. He told us he has worked in the shop for 14 years, but the shop itself has been there for more than 40 years. The card he gave us indicates that it is an “Entreprise du Patrimoine Vivant,” which means that umbrella creation (Thierry makes umbrellas as well) and repair is considered part of France’s living national heritage. I find that reassuring. 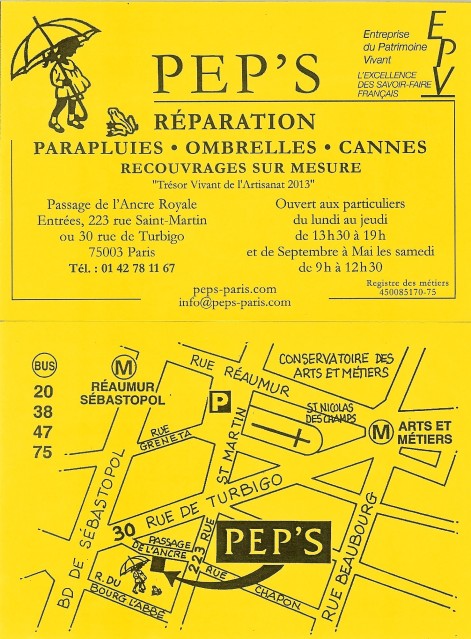 Our second recourse to a Paris artisan during our holiday came after a visit to a brocante (antiques fair). We love brocantes. If you Google “brocante paris” plus the date (such as “avril 2016”), you can find out when and where these events will be held.

The website vide-greniers.org directed us to the rue Cler in the 7th on a Sunday afternoon. It was the usual hodgepodge of genuine antiques, secondhand bric-a-brac, and garage-sale rejects that offers the promise of something unexpected if you just take the time to hunt a bit. And there is always a still life worth photographing, if only for the interesting reflections. 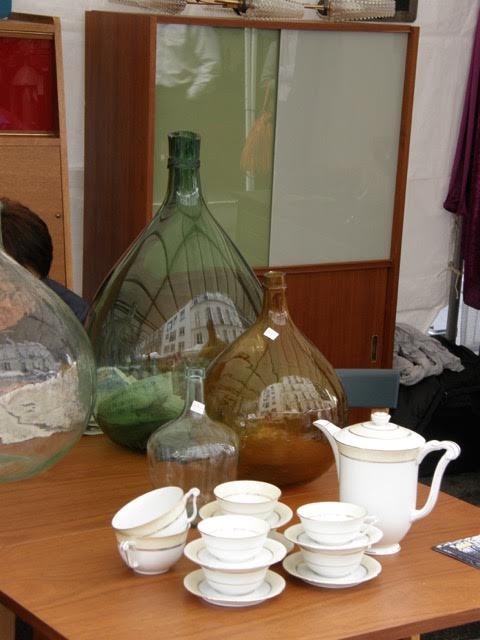 After a while I spotted four plates, each of which was decorated with a rebus (a motto or saying spelled out with pictures and letters). Five euros each. And for 20 euros, the stall owner threw in a rather nice ceramic tile Norman found.

I particularly liked one plate, perhaps because I was able to make sense of its rebus more easily than those on the other three. The stall owner wrapped the four in bubble wrap and I put the package in one of those folding nylon bags that I keep in my purse. But a little while later, as I was fumbling for my Navigo card, I dropped the bag on the sidewalk.

I went to the nearest stall to open the bag and check the damage. And yes, my favourite plate had broken into six pieces. The nearby stall owner came over to take a look. “We call that the devil taking his part,” she said, sympathetically.

I was dreadfully disappointed and out of sorts. I felt just the way I had when my umbrella broke so soon after I had acquired it. What to do? My first reaction was to photograph the rebus and throw the pieces away. But then I realized that this is Paris. I could have it repaired. Norman even offered to try repairing it himself. That settled the matter. I would get a professional on the job.

Back at our apartment, I went on line and searched for “Paris réparation céramique.” I identified two potential china repair shops. One was open on Mondays, so I called there first. Sophie Jehan of Atelier Cerami’K told me to come by on Tuesday. Her workshop was in the 11th, just off the rue de Charonne. 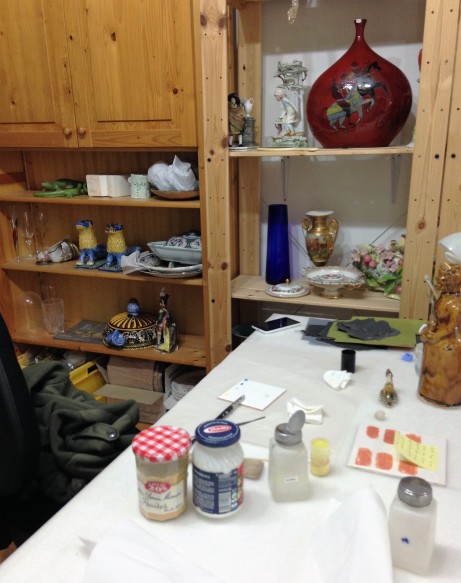 Sophie took a close look at the pieces and asked me if I wanted it to be repaired so the breakage was completely invisible, or if I just wanted it put back together again. I chose the second option. Okay, 30 euros, come back on Friday. Perhaps an excessive investment in an elderly piece of china, but I was getting into the spirit of Make Do and Mend, and I agreed. 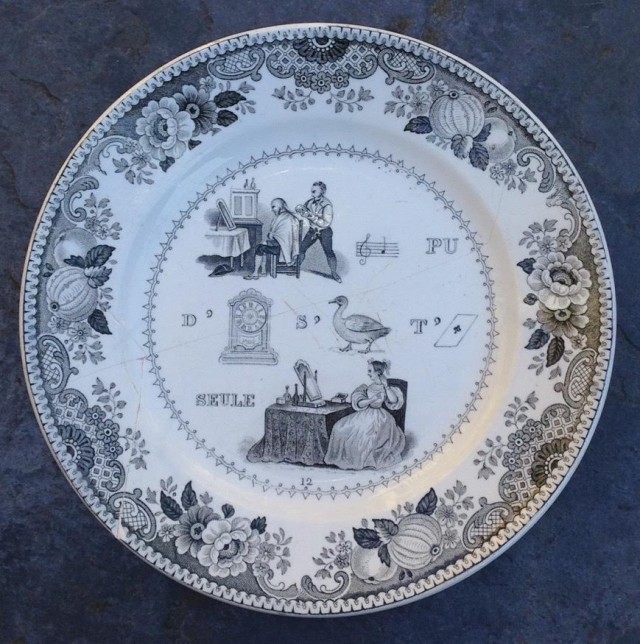 Here is the plate after the repair. You can see the cracks, but it is neatly mended. I wasn’t planning to eat off the plate or put it in a dishwasher. It will likely hang on the wall.

(If you would like to see the other plates – from an original set of at least 12 – scroll down and try your luck at interpreting the rebuses. The solution to the one above is also at the bottom of the blog.)

All in all, I was very happy to have the plate restored to me in one piece.

Our third exposure to the ethic of Make Do and Mend (albeit on a completely different scale) came at the Musée du Compagnonnage, which a good friend of ours had recommended. It’s a tiny two-room museum near the Place St-Sulpice (there is a much larger museum devoted to the same subject in Tours). 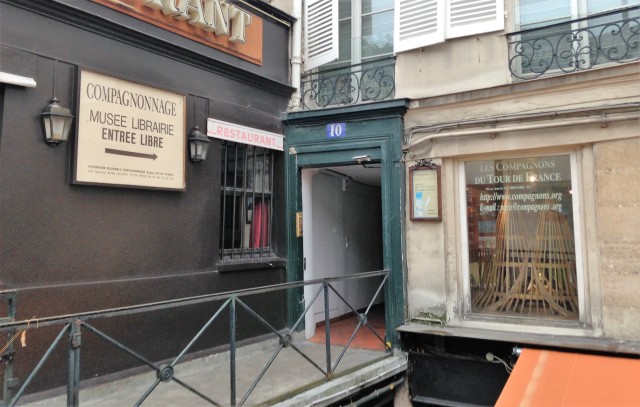 The word compagnonnage can mean either a guild or an apprenticeship. France’s surviving guilds are all related to the trades of construction and repair of buildings, although the country once had guilds for artisans making everything from sabots (wooden shoes) to carriages.

The museum displays scale models of a range of building elements. Each apprentice must produce a masterwork to demonstrate his skills and these are some of the results. The quality of work and the detail is astonishing. 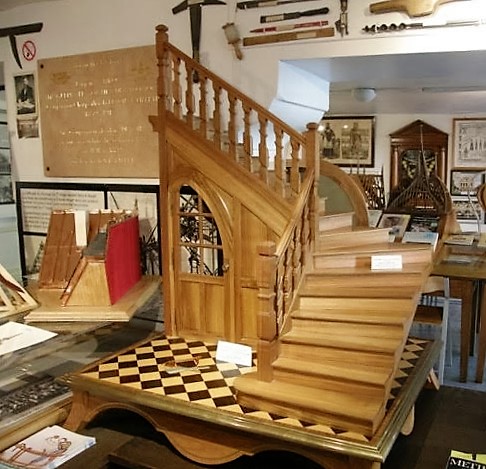 The man who showed us around, Yves Lapellegerie, was a retired carpenter in his eighties, and one of his own constructions was on display. Yves had created the wooden ribbing for a four-sided series of roofs, each one a different shape: straight, Empire, domed, and Mansard, surmounted by spires and knobs. He did it when he was 20, he said, and working at a full-time job, so it was all done in evenings and on weekends. It took him years. 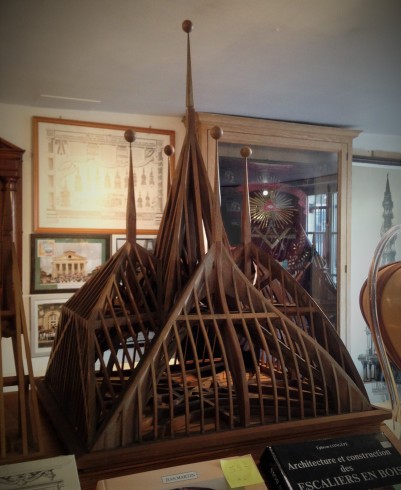 Yves told us that some people keep offering to buy these masterworks, and it is understandable. But they are without price.

The compagnonnage system still supports young people who want to develop skills in a trade, and makes arrangements for them to work in different parts of France to experience the range of regional cultures and traditions. Yves described this process as allowing for “l’ouverture de l’esprit” – a lovely expression.

All kinds of building trades are included, such as serrurerie – the creation or repair of metal locks, grills, enclosures, or awnings (marquises) – or the art of making and repairing roofs – slate, pantile, zinc, copper – on new and heritage buildings. 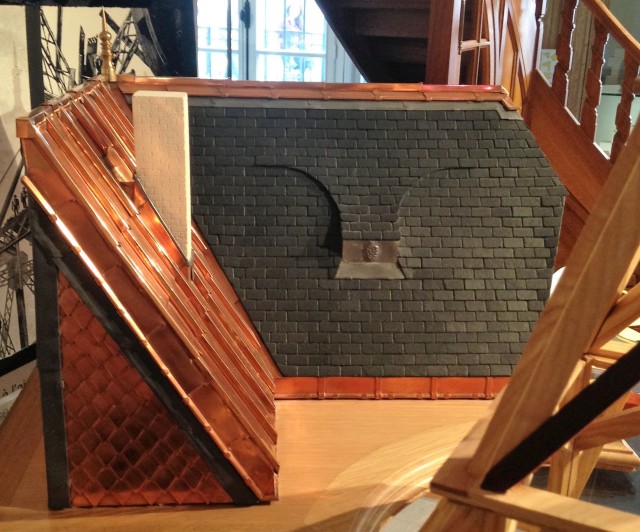 As we walk through Paris, it is rare for us not to pass a workshop in which someone is carrying out repairs – to watches, jewellery, musical instruments, furniture, metalwork, shoes, or clothing. To be sure, the garbage cans still overflow with broken umbrellas and cracked china, but in Paris, at least one has the choice whether or not to throw things away or repair them for a longer life.

1.The rebus for the repaired plate shown above reads: Que la pudeur soit ta seule parure. Solving the puzzle involves assembling the words for each image and saying them aloud. In this case: QUEUE LA (musical note) pu d’HEURE s’OIE t’AS seule PARURE. (Let modesty be your only finery.) It’s a bit like Fractured French. 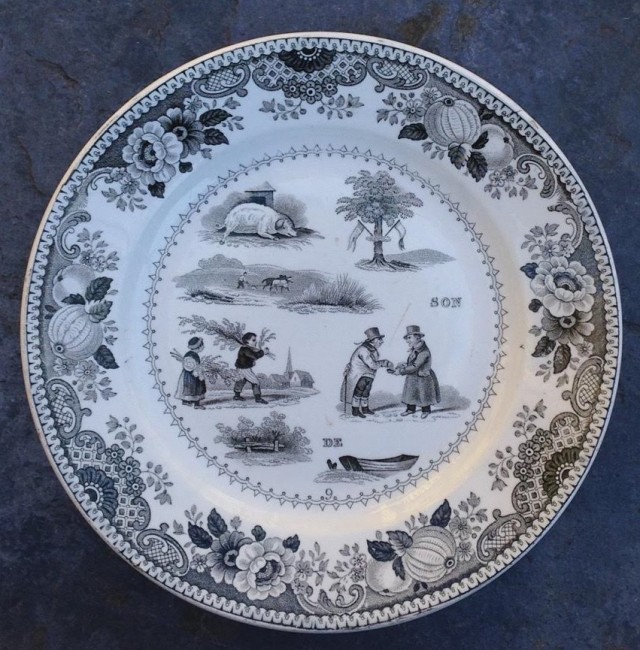 2. The plate above represents: Les méchants sont méprisés de tous. (Nasty people are despised by all.) I found this one hard to figure out, and would appreciate readers’ thoughts on the interpretation. 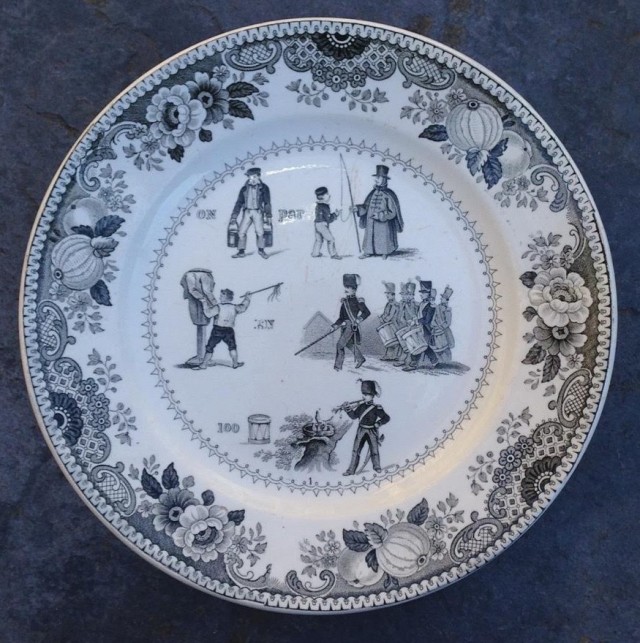 3. This one spells out: On voit par fois battre en retraite sans tambour ni trompette. (Sometimes one sees a retreat without fanfare.) 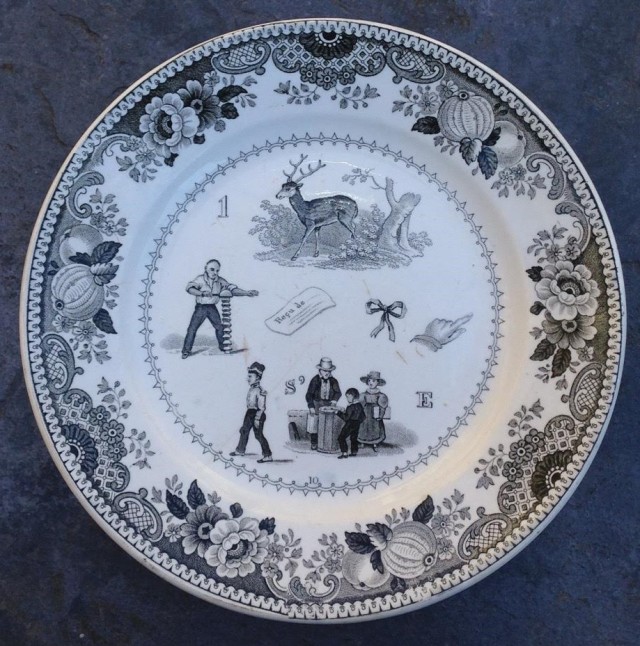 4. This one means: Un service reçu ne doit pas s’oublier. (A favour received should not be forgotten.) What is the last image showing? Any ideas?

Parisian Fields is the blog of two Toronto writers who love Paris. When we can't be there, we can write about it. We're interested in everything from its history and architecture to its graffiti and street furniture. We welcome comments, suggestions, corrections, and musings from all readers.
View all posts by Parisian Fields →
This entry was posted in Paris flea markets, Paris markets, Paris nostalgia and tagged apprenticeship, Atelier Cerami'K, brocante, campagnonnage, guilds, Musée du Compagnonnage, Passage de l’Ancre Royale, Patrimoine Vivant, Pep's, rebus, serrurerie, Sophie Jehan, Thierry Millet, umbrella, vide-grenier, Yves Lapellegerie. Bookmark the permalink.

23 Responses to Make do and mend